Alice Roosevelt: The First Daughter Who Climbed Onto the White House Roof and Buried a Voodoo Doll in the Yard

The presidents of America have had their share of troublesome children, but perhaps no first daughter caused so much trouble for her father or received so much adoration from the public than Alice Roosevelt did for Theodore Roosevelt. 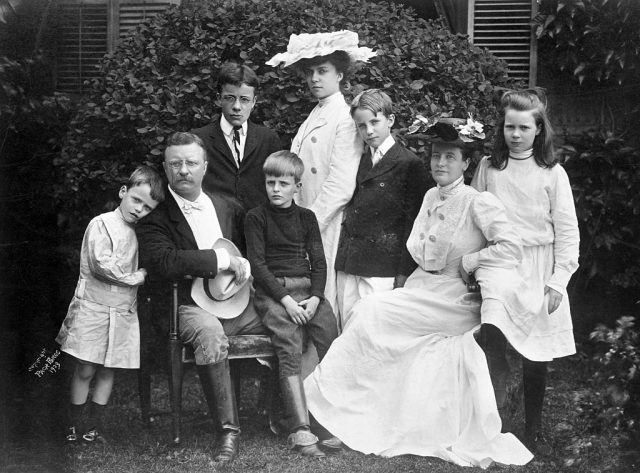 This double loss was too much for Theodore, who headed west for two years and left young Alice in the care of his sister, Anna, known affectionately as “Aunt Bye.” Anna was a significant influence on Alice, who later said: “If auntie Bye had been a man, she would have been president.”

When Theodore married Edith Carow in 1886, Alice went to live with them and was soon joined by five half-siblings. Although Theodore was now acting as her father again, it was too painful for him to called her “Alice,” so when she was young, she was “Baby Lee,” progressing later to “Sister” or “Sassy.”

It seems that, despite being back at the bosom of her family, Alice didn’t get along well with her stepmother. Edith allegedly commented that had Alice Hathaway Lee lived, she would have bored Theodore to death. Carol Felsenthal, who wrote Princess Alice: The Life and Times of Alice Roosevelt Longworth, stated how Edith had taken to referring to Alice as a “guttersnipe” when she was only 14 years old. 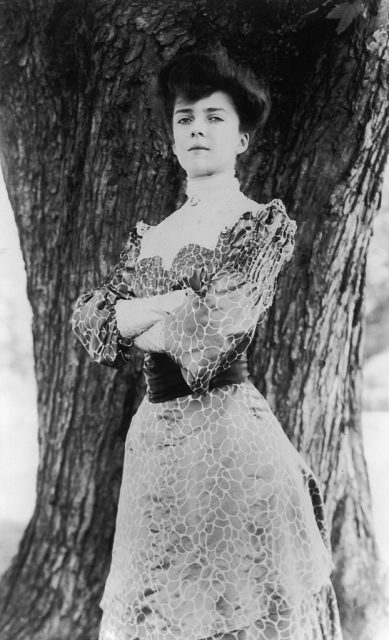 Mind you, Alice wasn’t an easy child to look after. She was frequently in the newspapers when she’d been seen smoking in public, chewing gum, and wearing pants. One photographer even snapped her collecting winnings from a bookie.

When Edith and Theodore tried to enroll Alice in Miss Spence’s school in Manhattan in an effort to curb her behavior, Alice wrote to them saying: “If you send me I will humiliate you. I will do something that will shame you.”

Theodore Roosevelt became president in 1901, and on January 3, 1902, a coming-out ball was held for Alice at the White House. She appeared in a gown that was such a distinctive shade of blue, it became known as Alice Blue.

Now entered into society, Alice wasted no time in having fun. During a span of 15 months, she attended 407 dinners, 300 parties, and 350 balls. But being the First Daughter didn’t change her attitude very much. A friend of Edith described her as “like a young wild animal that has been put into good clothes.”

Alice had a pet snake named Emily Spinach, but rather than keeping it in her room, she took it to parties wound around her arm. When Theodore saw pictures of her smoking in the newspaper, he had a stern talk with her and decreed that there would be no smoking in the White House. So Alice climbed onto the roof and smoked her cigarettes there. 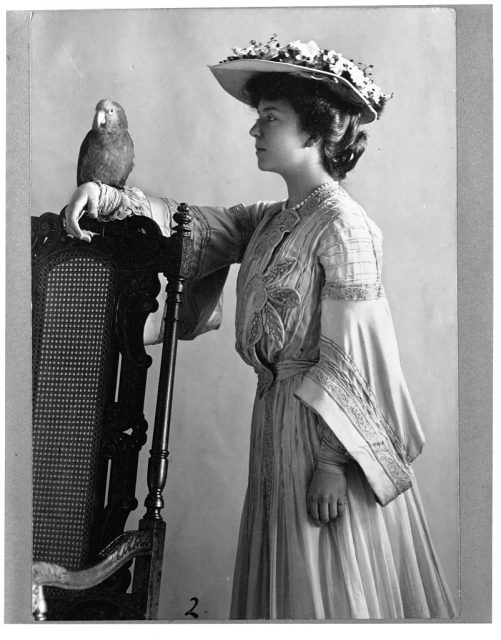 A marriage, but not a political union

When Alice chose to marry, it was to a Republican Congressman called Nicholas Longworth, who had a reputation as a playboy. 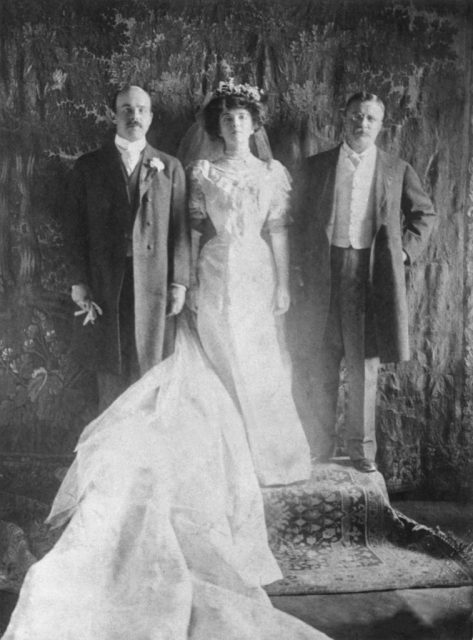 They were married at the White House on February 17, 1906. A thousand guests attended and a crowd waited outside, hoping to get a glimpse of the socialite couple. In true wild child style, Alice cut the wedding cake using a sword she borrowed from one of the military aides.

After their marriage, Nicholas didn’t appear to reign in his playboy ways, but Alice didn’t behave herself either. She had an affair with Senator William Borah, a man who was nearly 20 years her senior. 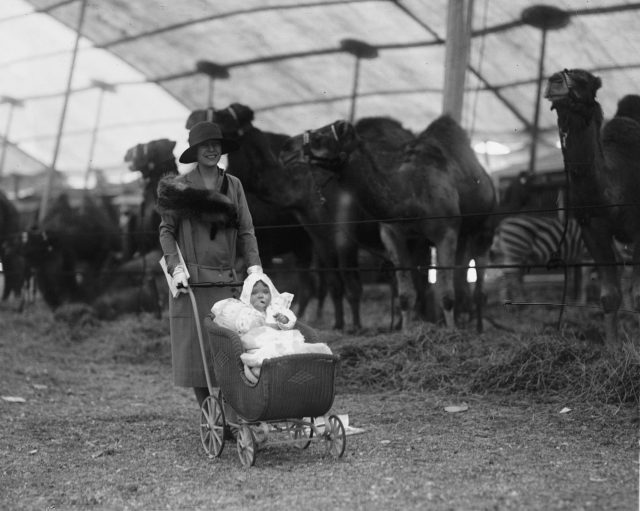 It is now generally accepted that the father of Alice’s only child, Paulina, was Borah rather than her husband. In fact, some sources suggest that, with a wicked sense of humor, Alice wanted to name her child “Deborah” – as in “de Borah.”

The distance between husband and wife extended from their personal lives into the political arena. When Theodore ran for a presidential candidacy with the new Progressive Bull Moose Party in 1912, her husband supported William Taft. Faced with such a personal choice, Alice threw her weight behind her father’s campaign rather than her husband’s.

The “Other Washington Monument”

Theodore Roosevelt was President until 1909. During that time, Alice would often offer him advice and would step in as hostess when Edith was ill.

Sometimes, the advice would not be particularly well received. Upon interrupting a meeting between the novelist Owen Wister and her father three times, Theodore said to his friend: “I can either run the country or I can attend to Alice, but I cannot possibly do both.” 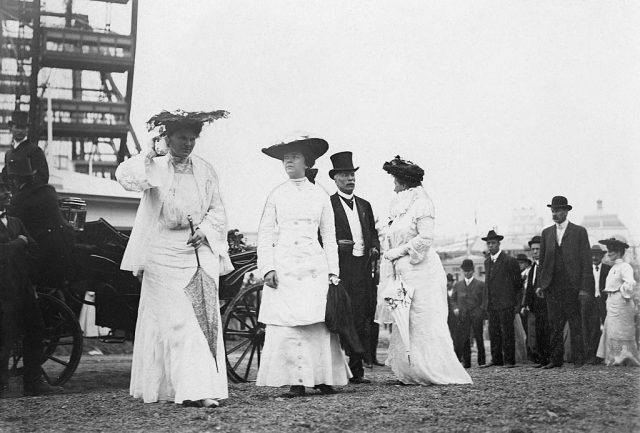 But it seems that the President did value her contributions. The White House History website quotes from a letter Theodore wrote after Alice had been on a trip to Puerto Rico: “You were of real service down there… and your presence was accepted as a great compliment.”

Yet even Alice’s political successes were overshadowed by her hell-cat behavior. On a 1905 diplomatic trip to Asia, Alice ended up jumping into a swimming pool with all her clothes on and encouraging a Congressman to join her.

Whatever Alice’s family thought of her, the public loved her and the papers nicknamed her “Princess Alice.” In fact, so much mail for her was received at the White House that a secretary was employed just to deal with it.

She spent such a long time in the center of politics – including becoming friends with subsequent presidents, especially Richard Nixon – that she earned herself the title of “the Other Washington Monument.”

Alice’s devilish sense of fun could often go too far or get her into trouble. In May 1908, when she was attending the House of Representatives, she decided to put a tack on one of the seats in the Capitol’s gallery. The poor man who sat down in it immediately leaped up in pain and surprise, while Alice innocently looked the other way, pretending to distance herself from the havoc she’d caused. 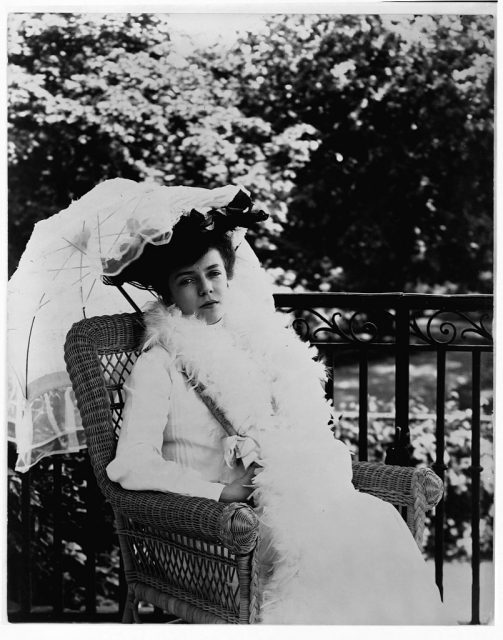 When Theodore was obliged to move out of the White House to make way for William Howard Taft, Alice buried a voodoo doll of Taft’s wife in the front yard. When this was discovered, she was banned from the White House.

She was also banned a second time after she told a dirty joke in public about incumbent president Woodrow Wilson.

A loving relationship with granddaughter

Just as Alice had publicly chosen her father over her husband, she wasn’t shy about making her thoughts about the rest of her family’s political aspirations known to the public. When Franklin D. Roosevelt ran for president in 1932, she wrote in Ladies’ Home Journal that: “Politically, his branch of the family and ours have always been in different camps, and the same surname is about all we have in common.” 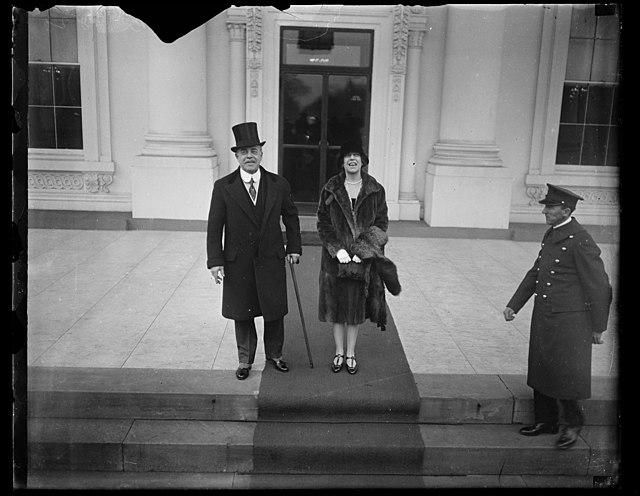 When he came to run for a third term, she was even more damning when she declared she’d “rather vote for Hitler than vote for Franklin for a third term.” She also didn’t think highly of Eleanor Roosevelt and would often impersonate her in a very unkind manner.

While her relationship with the rest of her family wasn’t particularly close, Alice became incredibly attached to her granddaughter after she had to take over her upbringing. Alice’s own daughter, Paulina, died of an overdose in 1957, and so Alice took over raising Paulina’s 11-year-old daughter, Joanna Strum. 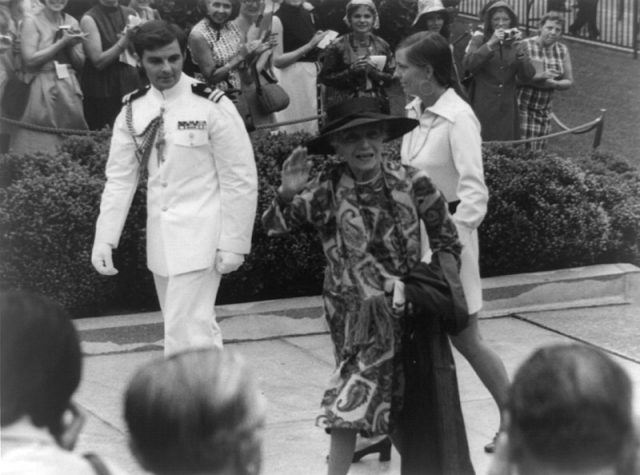 In 1969, an article in American Heritage commented that Joanna’s presence in Alice’s life seemed to be “a notable contributor to Mrs. Longworth’s youthfulness… The bonds between them are twin cables of devotion and a healthy respect for each other’s tongue. ‘Mrs. L,’ says a friend, ‘has been a wonderful father and mother to Joanna: mostly father.’” 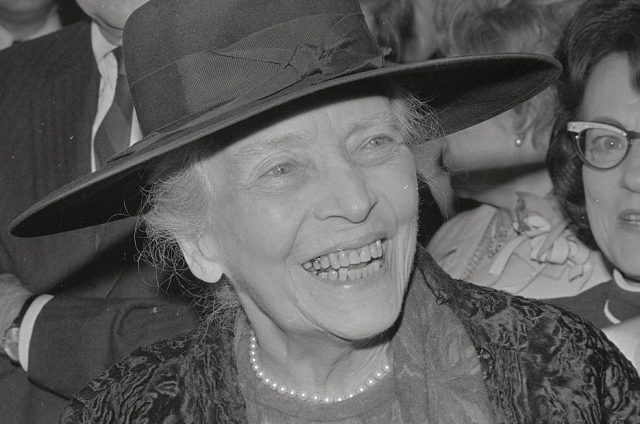 While Alice is remembered for her outlandish behavior, her sharp wit was a feature that endeared her to many and estranged her from some. While her father’s comment of “I cannot do both” has gone down in history, so have some witticisms from his daughter.

Alice was particularly proud of one quip she made, so much so that she had it embroidered onto a cushion: “If you haven’t got anything good to say about anybody, come sit next to me.”

When Senator Joseph met Alice at a social gathering, he called her “Alice” rather than “Mrs. Longworth,” meriting him this caustic response: “You will not call me Alice. The truckman, the trashman, and the policeman on the block may call me Alice, but you may not.” 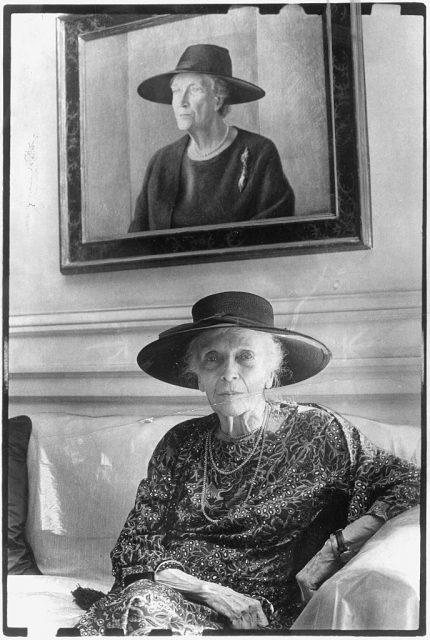 Alice Roosevelt Longworth sitting beneath a portrait in her mansion. (Photo Credit: Linda Wheeler/Library of Congress/Corbis/VCG via Getty Imag

Although Alice was close to President Nixon during his political career, a rift developed between them after Nixon used a quote by Theodore Roosevelt when he resigned from the White House: “Only if you’ve been to the lowest valley can you know how great it is to be on the highest mountain top.” Given that Theodore had made this statement about the loss of his wife and mother on the same day, Alice was furious and allegedly spat curses at the television screen as she watched it.

President Jimmy Carter was the only sitting president during her lifetime that Alice refused to meet, alleging a perceived lack of social grace on his part. But when she passed away, Carter had this to say about her: “She had style, she had grace, and she had a sense of humor that kept generations of political newcomers to Washington wondering which was worse – to be skewered by her wit or to be ignored by her.”

« These Iconic Celebrities Believe In Aliens… And They Might Not Be Who You Expect
From Bad To Worse: The Worst Films Of All Time, According To Rotten Tomatoes »