How do you rank the greatest Western stars of all time? It’s no easy task, we can tell you. Do you go by the number of Westerns they made? Or maybe by how iconic they are?

In the end, we went for the best of both worlds! Here are some of the most famous and prolific gunslingers in the movie business, ranked according to the number of Westerns they headlined. And in honor of The Magnificent Seven, we opted for a lucky number… 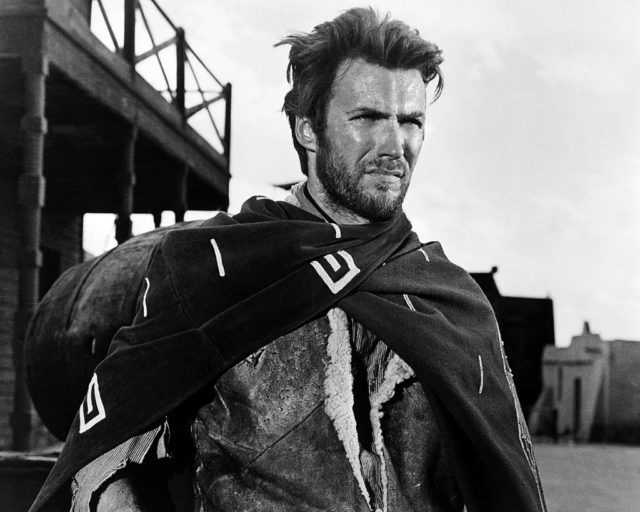 He may be a legend in the Western genre, as well as a global superstar overall. Yet when it comes to numbers, Eastwood is a little short compared to his fellow cowboys.

We’re going on big screen appearances rather than TV, meaning that his frequent appearances as Rowdy Yates in Rawhide (1959 – 65) are going in the old spittoon.

Nevertheless, Clint is strongly associated with the genre. The range of Westerns he starred in, from Sergio Leone’s Dollars Trilogy (1964-66) right through to the soul searching action of Unforgiven (1992), makes him a dead cert for this rundown. 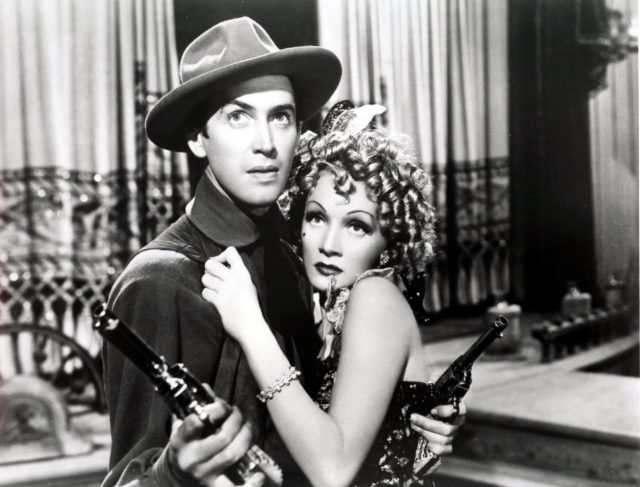 Classics include Destry Rides Again (opposite Marlene Dietrich, 1939), The Man Who Shot Liberty Valance (1962, with John Wayne), and Cheyenne Autumn (1964). This latter film was directed by arguably the ultimate Western director John Ford. It sought to portray Native Americans in a more positive light than before. 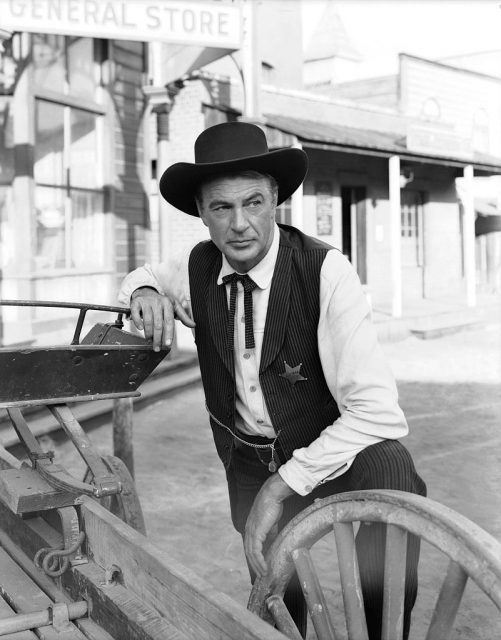 Edging ahead is Gary Cooper, who’ll forever be associated with Western staple High Noon (1952). It’s about to be remade in a decidedly modern context.

The tale of one man doing what he’s gotta do, accompanied by the famous Do Not Forsake Me, Oh My Darling, is part of Hollywood history. Also in the cast was Lee Van Cleef, whose grizzled features went on to become familiar to cowboy watchers across the globe. 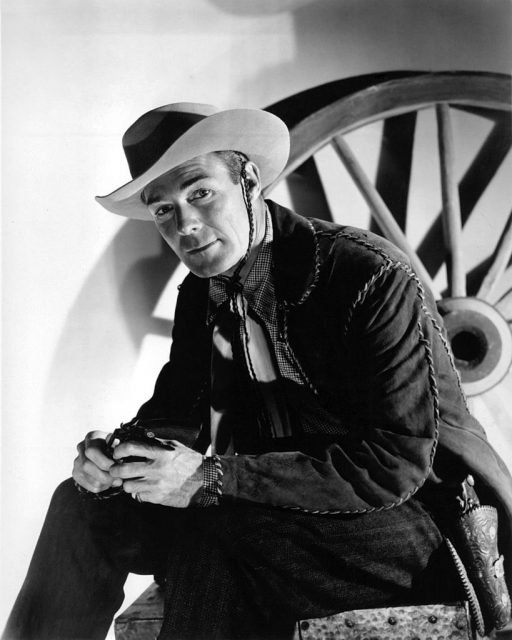 Time to almost treble the tally with the iconic Randolph Scott. His big break came with 1932’s Heritage of the Desert.

It was also the screen debut of director Henry Hathaway (who went on to helm the likes of The Sons of Katie Elder with John Wayne in 1965). 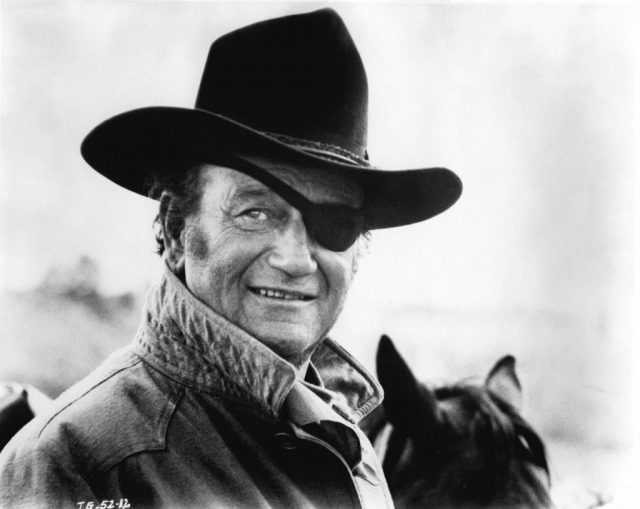 If you say “Western,” the name “John Wayne” inevitably precedes it. He doesn’t ride too high in the saddle for this list, but at least he makes the top three.

The Big Trail (1930) catapulted the unflappable voice of American authority onto the map. Directed by Raoul Walsh, it also ushered in his famous stage name. Beforehand, he was plain old Marion Morrison. Walsh reportedly wanted it changed.

Wayne went from bit player to Hollywood star in a gallop. He kept riding into town all the way up to 1976’s The Shootist. Co-starring was one James Stewart. 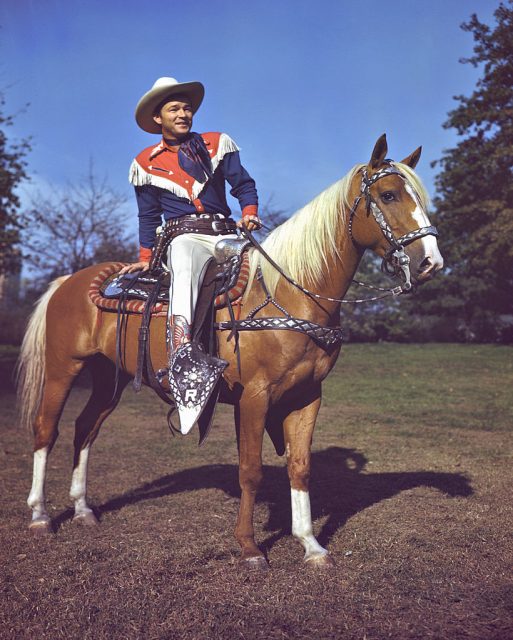 If anyone sums up the old-school movie cowboy, it’s Roy Rogers. He wasn’t just a clean living dude in a hat. He was a one-man franchise, in an era before such things really existed.

He didn’t just make Westerns, but will be forever linked to those adventures set during a simpler time of gunslinging and monochrome morality.

Rogers carried a tune, in addition to making the world a better place. His output appeared to be given a ribbing in the Coen Brothers movie The Ballad of Buster Scruggs from 2018. Though Rogers probably would have spat out his sarsaparilla at the extreme violence and mayhem onscreen.

Notable notches on his wagon include The Gay Ranchero (1948), Son of Paleface (with Bob Hope and Jane Russell, 1952), and final film Mackintosh and T.J. (1975). Rogers was often seen with his trusty equine sidekick Trigger. 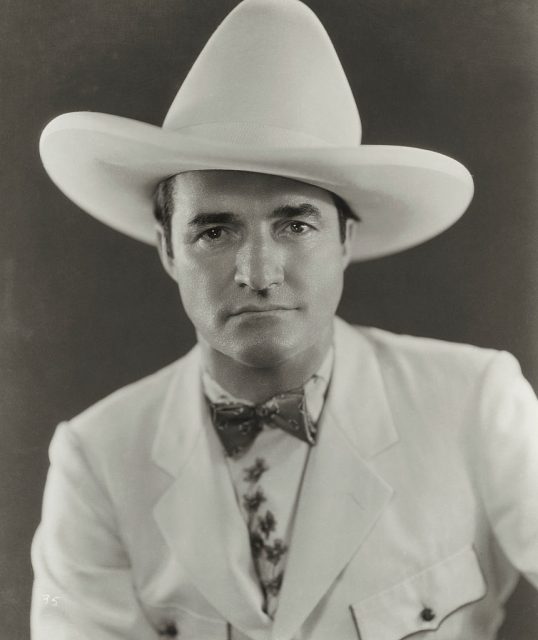 One cowboy of the big screen has the others beat hands down. Tom Mix was there when Hollywood was first putting stars on horses. One of his strongest movies is believed to be The Best Bad Man (1925).

Beginning his screen career in the early 20th century, he dazzled audiences through to the mid-1930s. Cementing his credentials, Mix reportedly attended the funeral of Wyatt Earp and acted as a pallbearer.

Mix mainly starred in silent pictures, though shot nine “talkies” at Universal Pictures. He didn’t enjoy the experience, after being injured during production. Other reasons for him sticking to the silent era have been suggested.

It’s thought “that the actor’s voice was so high-pitched that it undermined his macho cowboy image,” according to History. Though others say they “simply had too much talking for Mix’s taste.”

He died in a decidedly non-Western fashion, when his convertible crashed. The spot is marked by a two-foot tall horse statue, plus one notable dedication. 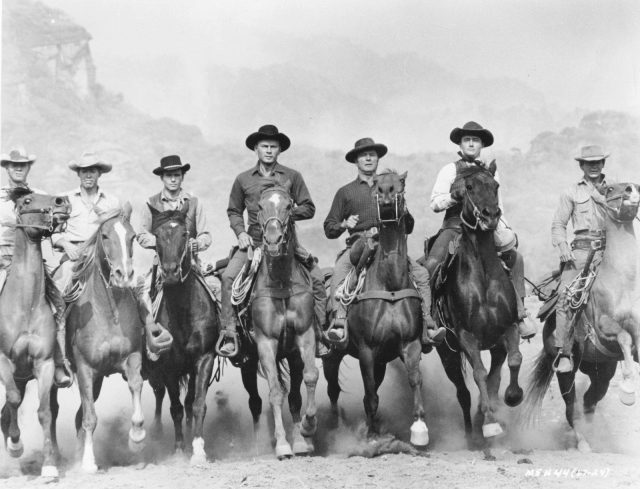 More from us: 8 Times Clint Eastwood Behaved Out Of Character

We took part of the title for this article, so couldn’t not mention this legendary 1960 lineup. Star Yul Brynner wasn’t particularly tied to the Western, though in later life he impressed audiences with his performance as a robot cowboy in the original Westworld (1973).

Steve McQueen had his moments in the saddle. But it was Charles Bronson who really earned his spurs with Once Upon A Time In The West (directed by Sergio Leone in 1968), Chato’s Land (1972), and Breakheart Pass (1975).