Clint Eastwood is the all-American tough guy who kicked people’s butts from the Old West to 20th-century San Francisco.

There’s something reassuring about this Hollywood icon. But behind the public perception lies a man like any other. One who doesn’t always act the way you expect.

8. He used to be a grocery clerk 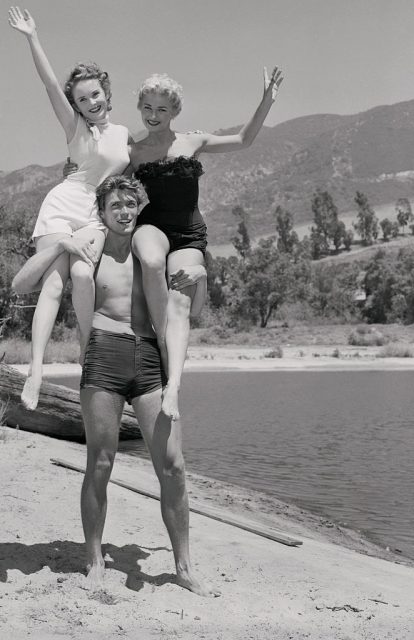 This “campus” appears to be just what the doctor ordered during the heat wave plaguing most of the U.S. these days, as three young hopefuls indulge in some open-air matriculation in Universal-International Pictures’ Stardom School. Keystone of the intense “study” group is San Francisco’s Clint Eastwood. On his right shoulder is Olive Sturges of Ocean Falls, British Columbia, and on his left is Deni Crayne who hails from Minneapolis. (Photo Credit: Bettmann / Contributor)

As a young man, Clint earned a living in various ways. Some jobs fit his public image down to the ground. He was a firefighter and a lifeguard, according to Marc Eliot’s American Rebel (2009).

However, at one point he earned his crust as a grocery clerk. A perfectly normal job for someone to have… just an odd role in which to picture the future Man With No Name!

Clint Eastwood stacking canned fruit, or showing customers where the milk is? Hmm, that doesn’t sit right. Still, it showed his dedication to hard work from the beginning. 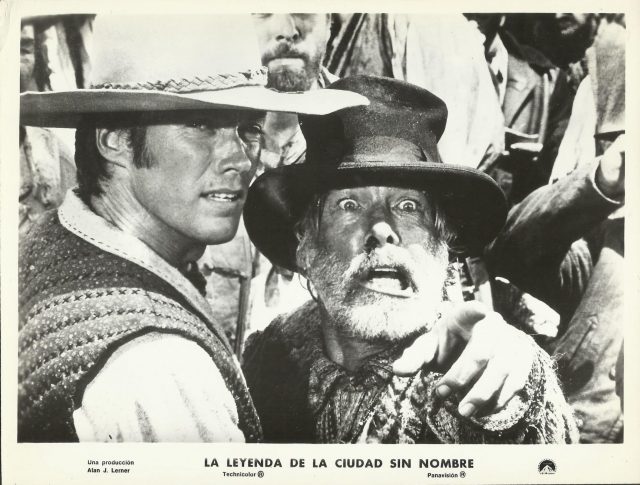 Eastwood’s most high-profile, out-of-character act was surely Paint Your Wagon (1969). This was an old-timey Western but one with a difference… it was also a musical, based on the 1951 production by Alan Jay Lerner and Frederick Loewe.

Spaghetti Western fans must have been surprised when Eastwood showed the world his vocal talents! Actually, the star had been singing since his TV days.

Needless to say, Clint Eastwood singing is a lot like Clint Eastwood talking. Though we’re not saying he can’t carry a tune, as this scene from Rawhide demonstrates.

Fellow grizzled leading man Lee Marvin also performed some numbers. The movie was elaborately spoofed in an episode of The Simpsons.

Eastwood mentioned to Entertainment Weekly (as highlighted by Slate) that the story was changed in tone to make it “fluffy.” While he lost interest, he had few qualms about singing on camera: “My dad was a singer and we’d have sing-arounds. But certainly Sinatra wasn’t worried.”

Eastwood went on to tickle his tonsils in the likes of Bronco Billy (1980) and Honkytonk Man (1982). As well as being a chart-topper (via “Bar Room Buddies” from Bronco Billy with Merle Haggard), he also produced and directed the movie adaptation of Jersey Boys in 2014. 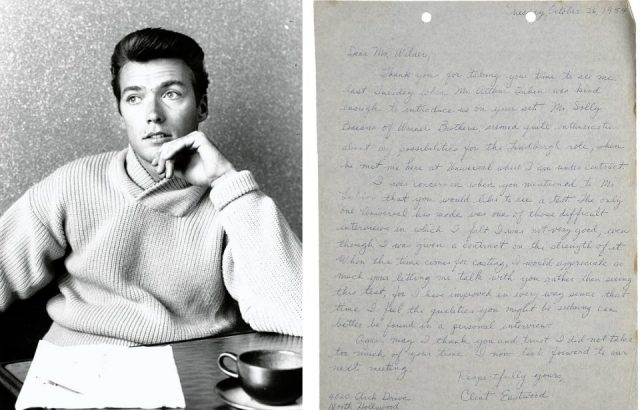 Mental Floss notes Eastwood’s 1954 letter to respected Hollywood director Billy Wilder (Some Like It Hot). He was after the role of Charles Lindbergh in The Spirit Of Saint Louis — Wilder finished the movie in 1957, with James Stewart as aviator Lindbergh.

Eastwood penning a polite communication, rather than showing up at the director’s door all guns blazing? Alright, that’s a little dramatic, but even so. The contrast between the star’s screen image and how he conducts business behind the scenes is clearly very different.

Also, this was early in Eastwood’s career and he wanted to make a good impression. The idea of Clint and Wilder working together is an intriguing one. It never came to pass but the words Eastwood wrote are available to read. 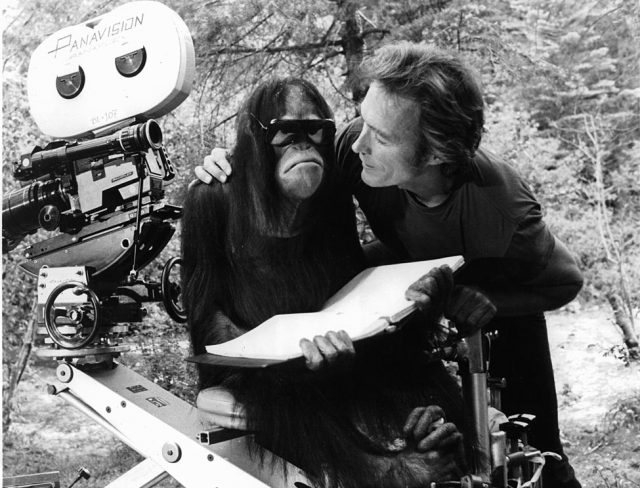 Clint Eastwood with his arm around Manis the orangutan who has sunglasses on in a scene from the film Any Which Way But Loose, 1978. (Photo Credit: Warner Brothers/Getty Images)

Audiences knew Clint Eastwood as the man who herded cattle in Rawhide and rode horses in a bunch of Westerns. No way would he do a buddy movie with an orangutan. Would he…?

Every Which Way but Loose, directed by James Fargo in 1978, cast Clint as truck driver Philo. This tough guy fought with his fists, but those bruised knuckles hid a softer side. Animal companion Clyde (originally played by Manis) brought that out between the brawls and batterings.

“That was a film my agent and everyone else begged me not to do…” Eastwood said, in conversation with Michael Parkinson in 2003. He disagreed, wanting to make “a movie that kids could see, with a little less mouth.”

Reportedly, the screenplay was intended for Burt Reynolds before Clint took a shine to it. It was so successful that a sequel followed in 1980, Any Which Way You Can. 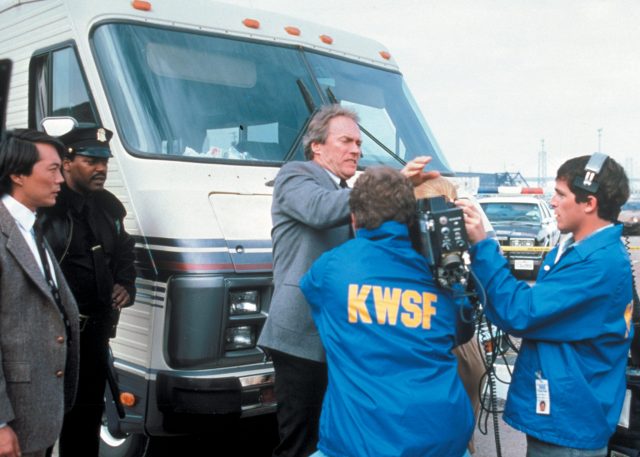 Eastwood in a scene from The Dead Pool (Photo Credit: MovieStillsDB)

By 1988, the antics of “Dirty Harry” Callahan were seen as a little old hat. Eastwood had one last roll of the dice, asking punks if they felt lucky in the fourth Harry movie The Dead Pool.

One scene is strangely out of character for the Magnum-packing detective. He is pursued by a radio-controlled car! The explosive-laden toy nearly ends Harry’s career before retirement, in a frantic yet bizarre chase sequence.

It was a curveball for the iconic action star, and one that possibly reflected the gimmicky flicks of the time.

3. Being friends with Jim Carrey 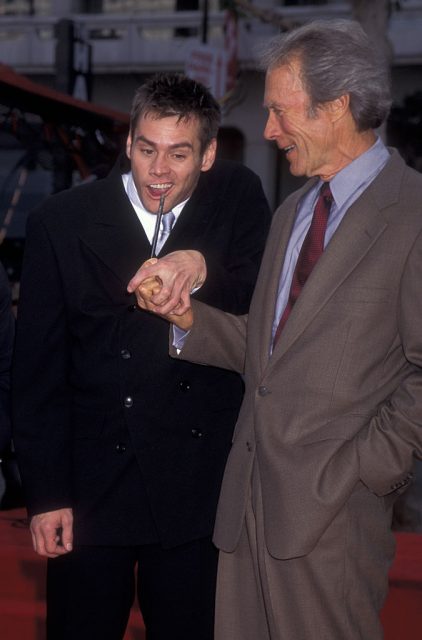 Jim Carrey had an early role in The Dead Pool, playing a rubber-faced rock star. While you might think Carrey would rub the veteran actor up the wrong way (as he did with Tommy Lee Jones), the truth is very different. Actually, he liked the guy!

Carrey was later cast in the Eastwood comedy Pink Cadillac, based on the strength of his performance. The actor/force of nature paid tribute to Clint many times, and has performed a hilarious take-off during public appearances.

Unusual as it may seem, we might not have had Jim Carrey the megastar without Clint Eastwood. 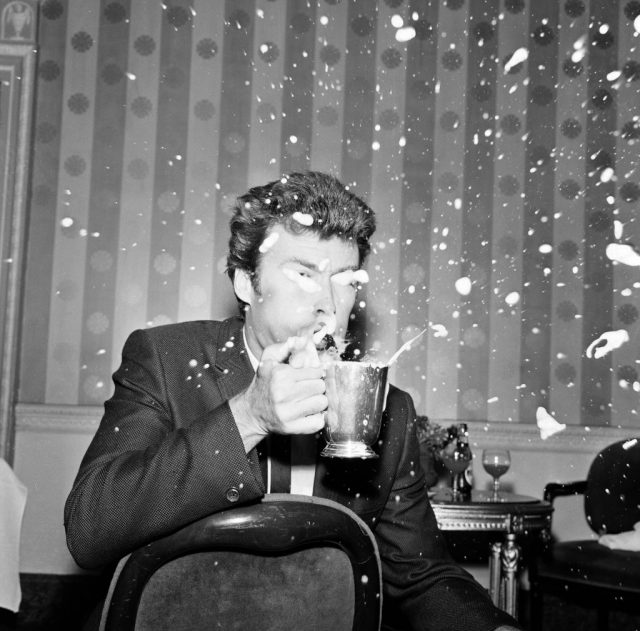 Clint Eastwood arrived in Manchester today and found his favourite pint of beer in the city. ‘I love beer but the froth gets up my nose’ he said, and immediately blew it off the top of his pint, 12th June 1967. (Photo Credit: Tom Lyons/Mirrorpix/Getty Images)

One story that goes around about Clint Eastwood concerns his liking for Newcastle Brown Ale. The Chronicle writes that fans of the product “included Dirty Harry star Clint Eastwood who said it was his favourite beer.”

Does one of the ultimate American movie cowboys really rate this famous drink from north east England? All was sort of revealed in another, very different part of the UK from Newcastle… Oxford.

Answering students’ questions at the Oxford Union in 2013, he said he’d visited Newcastle, where: “everybody told me the beer might make me go blind… but I tried a few and they were good. I didn’t have a hangover.” 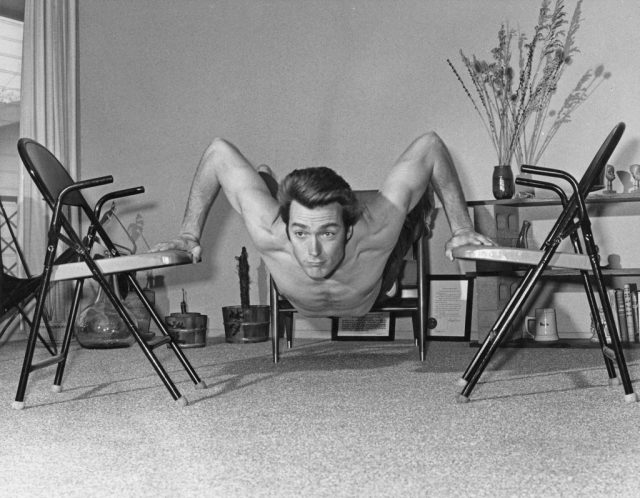 Clint Eastwood may look like a tightly-coiled spring on camera. But the man sure knows how to relax.

Can you imagine Eastwood enjoying a spot of transcendental meditation? Neither can we. Nevertheless, it’s been part of his routine for decades.

More from us: Clint Eastwood – The Quintessential Cowboy who was Allergic to Horses

Mental Floss refers to Eastwood’s 2013 GQ interview, in which he said: “I believe in whatever self-help you can give yourself, whether you believe in Buddha or whatever.”

Sounds like Clint takes a no-nonsense approach to finding inner peace. An unexpected development, but the way he talks about it is classic Eastwood.

« Tired Of Being Mistaken For Someone? Write A Song About It Like Rick Springfield!
The Reason Muhammad Ali Refused To Fight And Lost His Heavyweight Title »