Nicolas Cage Facts That Show Why He Is A True Original

It was clear from the get-go that Nicolas Cage was a true original. The nephew of acclaimed director Francis Ford Coppola forged his own path. He’s made a staggering range of movies and grabbed his fair share of headlines along the way.

But who is the man behind the story? Buckle up, put the bunny back in the box and prepare to uncover some facts about Mr. Cage. 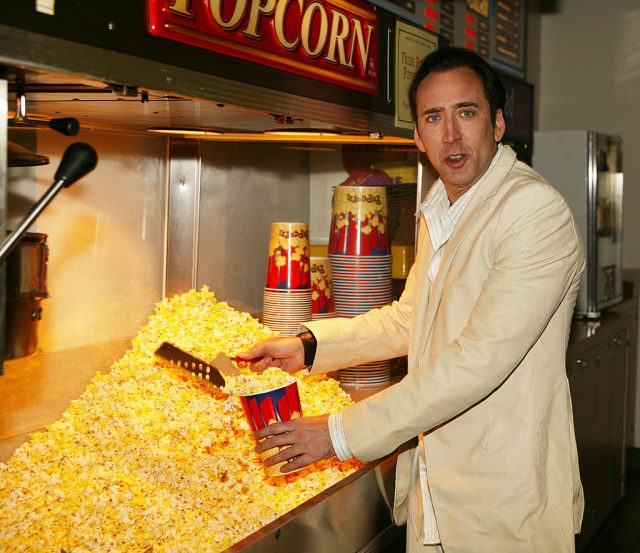 As mentioned by Mental Floss, lovers of a certain Japanese snack were confronted by an image of a smiling Nicolas Cage on their product.

What was he playing at? Nothing, as it turned out. Overenthusiastic marketeers for the movie Army of One (2016) decided to Cage up the packaging. However, they failed to okay it with the man himself.

One offbeat snack Cage was definitely aware of was a cockroach, that he famously consumed when making Vampire’s Kiss (1989).

The Jamaican and the Hornet 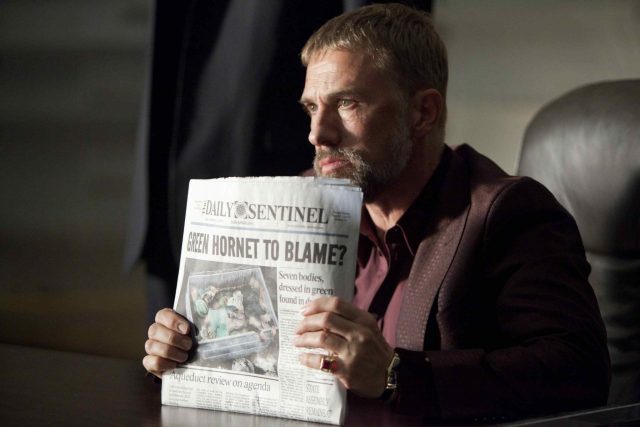 Surreal filmmaker Michel Gondry could have made a great combination with Cage for the superhero film The Green Hornet (2011). He reportedly wanted the role of Russian mobster villain Benjamin Chudnofsky, eventually played by Christoph Waltz (pictured).

Why didn’t it work out? Let’s just say that Cage’s ideas were a little out of left field.

Was he serious? Absolutely. Cage even performed an impromptu audition in a Jamaican accent. And for his character’s appearance, he requested fake lips, plus tattooed hair on his head. Yes, a tattoo of hair, according to a bemused Rogen.

A career with bite 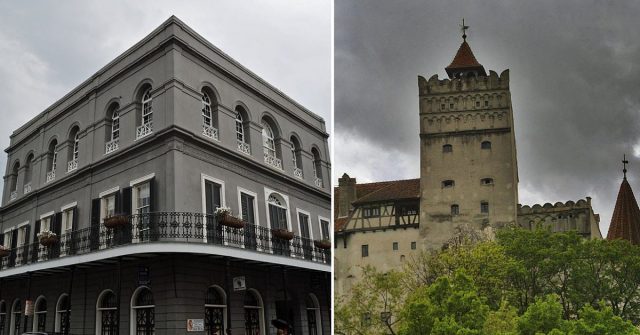 We mentioned Cage’s cockroach incident during the making of Vampire’s Kiss. Well, this wasn’t the star’s first brush with blood drinkers.

The same year he was in negotiations for Green Hornet, Cage shot the comic book sequel Ghost Rider: Spirit Of Vengeance in Europe. One day, Idris Elba discovered the reason his leading man looked so tired – he’d reportedly taken a trip to the ruins of “Dracula’s Castle” for forty winks.

A night at one of the eeriest places on Earth? Sounds crazy, but it seems Cage really needed to get into the headspace of hellish title character Johnny Blaze/Ghost Rider.

Property plays a big role in Cage’s life. In 2007, he snapped up the LaLaurie Mansion in New Orleans. This former hang-out for the murderous Madame Delphine LaLaurie formed the inspiration for American Horror Story: Coven.

Why did he buy the creepy mansion? Because he had a horror novel in mind and wanted somewhere appropriate to write it. 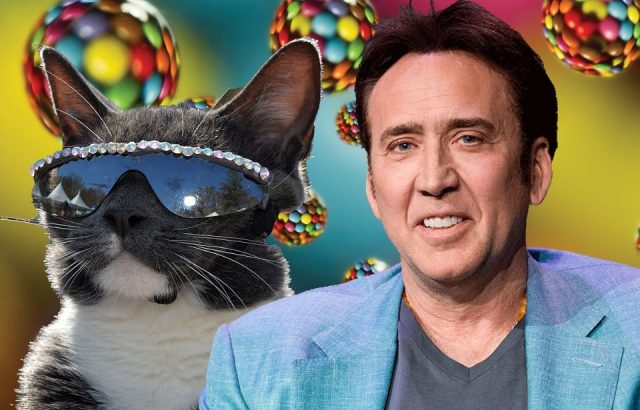 As a young actor, Cage appears to have enjoyed the occasional magic mushroom. And who better to share them with, than his companion at the time… a cat named Lewis!

“He ate them voraciously,” the full-of-surprises thespian told David Letterman in 2010. “It was like cat-nip to him.” Lewis also felt like a brother during these times, he stated.

A Cage for Humanity 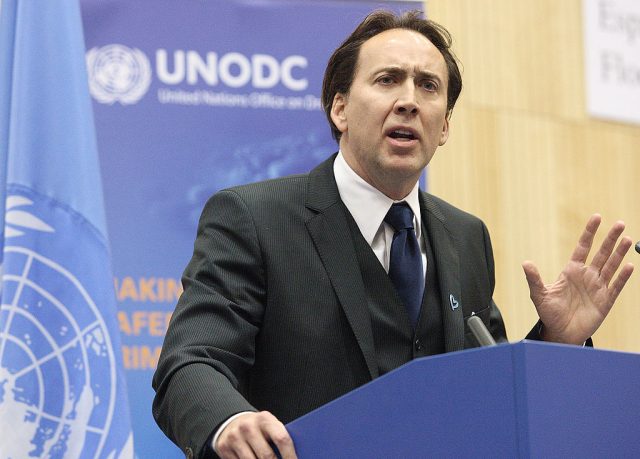 US actor and Goodwill Ambassador for Global Justice Nicolas Cage gestures as he speaks at the fifth session of Parties to the United Nations Convention against Transnational Organized Crime. AFP PHOTO/DIETER NAGL (Photo Credit: DIETER NAGL/AFP via Getty Images)

Fun though it is to point out Cage’s excesses as a multi-millionaire movie star, it’s easy to overlook his generous nature.

As well as giving Amnesty International $2 million in aid of child soldiers, he received a United Nations Humanitarian Award.

Cage may have been a Lord Of War in his 2005 arms dealer drama. But he reportedly used his role to highlight controls on international weapons trading.

He’s playing himself next year 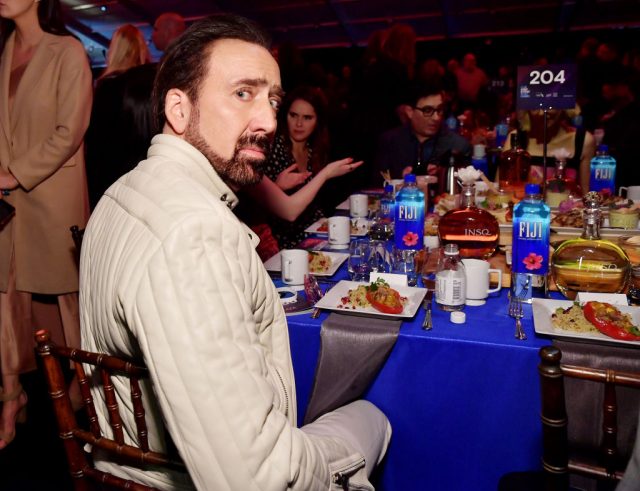 There is arguably one character Nicolas Cage was born to play – himself. He’s been doing it all his life of course, but no one has cast the eye-catching star as a fictional version. Till now.

The much-delayed release The Unbearable Weight of Massive Talent sees Cage having to rescue his wife and daughter from the clutches of a drug kingpin (Pedro Pascal).

Tiffany Haddish, Neil Patrick Harris, and Sharon Horgan are among the supporting cast. It comes out in 2022.

The Tomb of Nicolas Cage 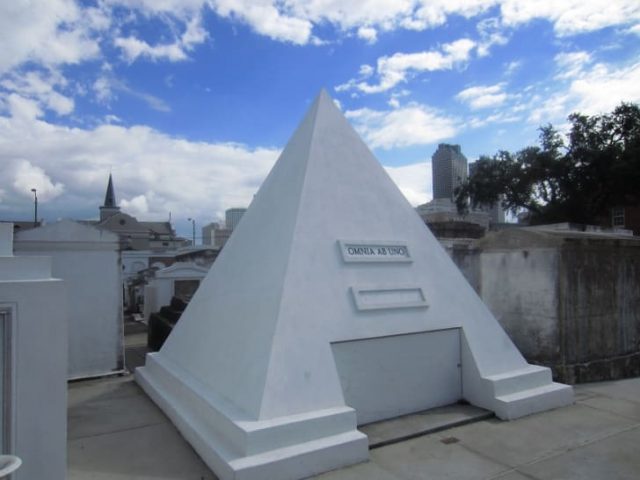 It isn’t just a mansion that Cage purchased in New Orleans. One of its cemeteries plays host to a pyramid made of stone. Measuring 9 feet high, it features the maxim “Omnia Ab Uno” (“Everything From One”).

What is this mystery mausoleum, which occupies one of two plots? Why, the future grave of Nicolas Cage, of course!

Atlas Obscura notes: “the more paranormally-minded suggest that the pyramid is where Cage will regenerate his immortal self.” The presence of lipstick kisses on the stone is an unexpected addition to the piece.

If any big name is going to perform a mystical comeback from the dead, then Nicolas Cage is it.