One of the largest collections of early fishing technology has been uncovered by archaeologists in the Jordan River Dureijay in the Hula Valley in northern Israel. The find is notable, given the majority of materials used by ancient humans for the activity were perishable and have since decayed. 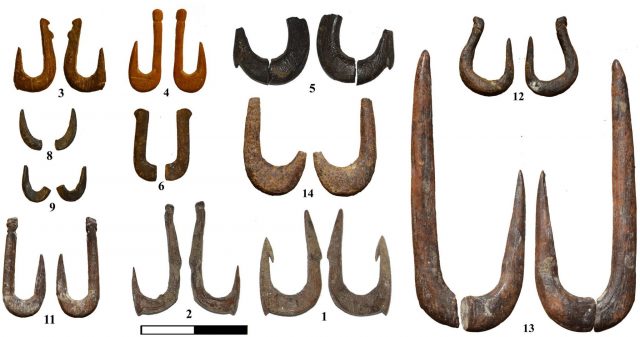 The ancient fishing hooks found at the excavation site. (Photo Credit: PLOS One)

The find was shared in a study published in PLOS One. It was made by a team led by Antonella Pedergnana of the RÃ¶misch-Germanisches Zentralmuseum, Leibniz Research Institute for Archaeology in Germany. During the excavation, they uncovered six grooved stones and 19 bone fish hooks.

It’s believed the implements date back over 12,000 years ago, based on data gleaned from radiocarbon dating. They are thought to have come from the Natufian culture, meaning they may offer more information about its people’s way of life.

The different levels being excavated at the site in northern Israel. (Photo Credit: PLOS One)

“The hooks are amazingly similar to modern hooks – in size, in features (like barbs) and in dexterity of making. Moreover, the hooks present features that are rarely found in modern-day hooks – for example, an outer lower barb aiming to function as a ‘point of no return’ to prevent the fish from escaping the hook.”

Based on the analysis of the items recovered, it’s believed the stones were used to weigh down rods. Paired with the hook technology, this shows sophisticated fishing methods likely arose during a shift in human history that saw a change from nomadic to agricultural lifestyles.

A wide array of hooks were uncovered, indicating those who used them knew different instruments were required to catch different types of fish. These ancient tools also share similarities to modern hooks. “Looking at the hooks, we notice that there are no two that are alike,” said Sharon.

“They knew exactly what size of hook is appropriate for what size and type of fish, as well as what qualities are required for each fish type to achieve the best results,” he added.

However, unlike modern hooks that have metal loops for hold lines, the ones found in northern Israel have diverse methods of attaching the line to the hook, using “grooves, bulges and sophisticated knots, and even the use of glue.” As well, plant fiber residue indicates ancient fishermen were making and fishing with artificial lures. 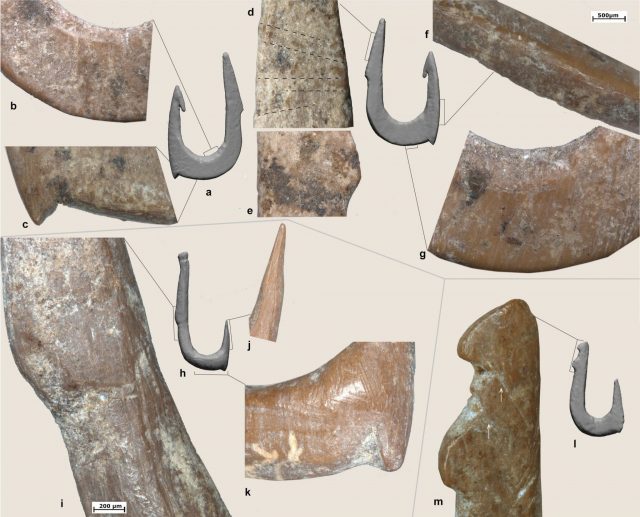 A closer look at the fishing hooks discovered at the excavation site. (Photo Credit: PLOS One)

More from us: Remains of Hellenistic Fortress Uncovered In Israel

It’s believed the fishing tools were made off-site and carried to where they were found, as evidence of habitation was not located.

« ‘Problematic’ Theodore Roosevelt Statue Moving to New Home
The Answer Behind Who Dug These Mysterious Tunnels In Washington D.C. Is Really Bugging Us »