In 1997, people around the world teared up as Sir Elton John famously performed his reworked song, “Candle In The Wind,” at Princess Diana’s funeral. Although many people consider this to be one of the artist’s best performances, the British royals were hesitant about his special tribute. Here, we take a look at why Buckingham Palace nearly prohibited Elton John from performing at Princess Diana’s funeral.

Newly released government papers from Britain’s National Archives show that the royal family was worried that the new “Candle In The Wind” lyrics were “too sentimental.”  In fact, on the day of the funeral, Westminster Abbey had a solo saxophonist on standby to perform a rendition of the song if the palace refused to allow Elton John to perform. 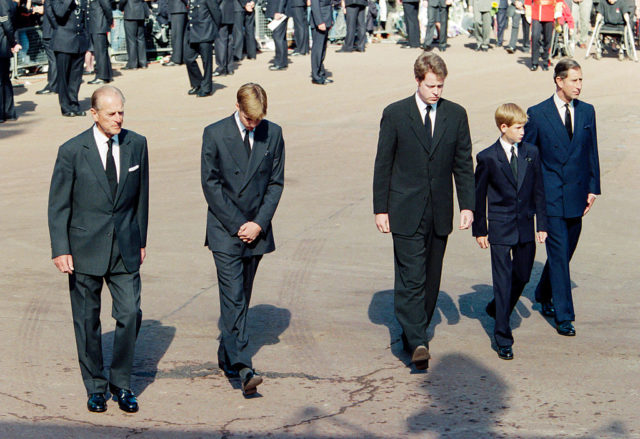 The Dean of Westminster, the late Very Reverend Dr. Wesley Carr, personally contacted Buckingham Palace and urged them to reconsider their decision. In a note to Lieutenant Colonel Malcolm Ross, a senior member of the royal household, Dr. Carr wrote: “This is a crucial point in the service and we would urge boldness. It is where the unexpected happens and something of the modern world that the princess represented.”

Dr. Carr went on to say, “I respectfully suggest that anything classical or choral (even a popular classic such as something by Lloyd Webber) is inappropriate. Better would be the enclosed song by Elton John (known to millions and his music was enjoyed by the princess), which would be powerful.” 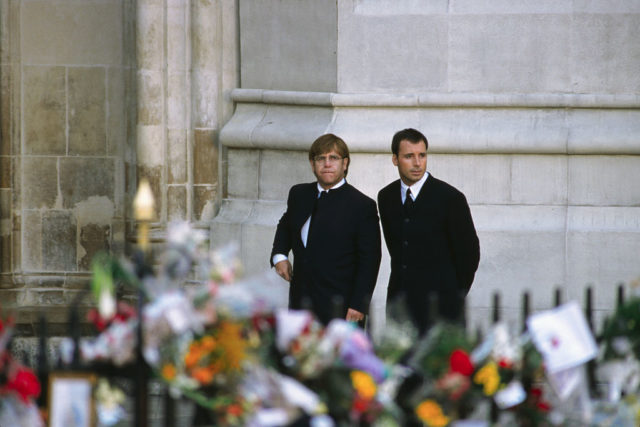 Singer Elton John arrives with David Furnish at the funeral of Diana, Princess of Wales, only seven days after she was killed in an automobile accident in Paris.  (Photo Credit: Peter Turnley/Corbis/VCG via Getty Images)

To emphasize the importance of Elton John performing, Dr. Carr added, “He [Elton John] has written new words to the tune which is being widely played and sung throughout the nation in memorial to Diana. It is all the time on the radio. Its use here would be imaginative and generous to the millions who are feeling personally bereaved: it is popular culture at its best. If we thought the words too sentimental (although that is by no means a bad thing given the national mood), they do not need to be printed- only sung.”

Dr. Carr ended his letter by emphasizing, “I would be prepared to discuss the significance of this suggestion over the phone with anyone.” However, according to the National Archives, there is no record of any reply. 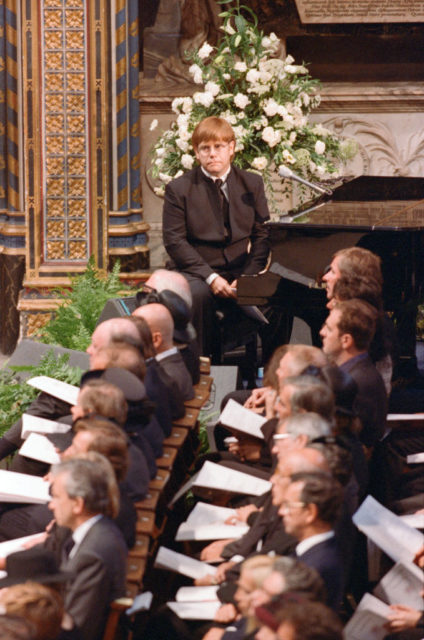 Sir Elton John at the funeral of Diana, Princess of Wales, pictured sitting at the piano where he sang a revised version of his song Candle in the Wind (Photo Credit: Mike Maloney/Mirrorpix/Getty Images)

As we know, Elton John did end up performing “Candle In The Wind” at Princess Diana’s funeral, rewritten as “Goodbye England’s Rose.” It went on to become one of John’s biggest hits. The updated version of his 1973 song peaked at Number One on the Billboard Hot 100 chart in October 1997. It stayed the number one song for a total of 14 weeks.

More from us: Diana Spencer Was The People’s Princess And The Queen Of Style

It must have been difficult for John to perform at Diana’s funeral, as the two were very close friends. In 2008, Elton John revealed what was going through his mind, saying, “Me playing at the funeral was one of the most surreal things I have ever done.”

“What was going through my mind was: Don’t sing a wrong note. Be stoic. Don’t break down and just do it to the best you can possibly do it without showing any emotion whatsoever. My heart was beating quite a lot, I have to say.”

« Here’s Why Princess Diana’s Wedding Was One of the Worst Days of Her Life
First Tom Holland as Fred Astaire, Now Chris Evans as Gene Kelly? MCU Goes Golden Age »