Archaeologists with the Museum of London Archaeology (MOLA) have uncovered a nearly 2,000-year-old ancient Roman mosaic near the Shard. It’s the largest to be discovered in the UK capital in nearly 50 years. 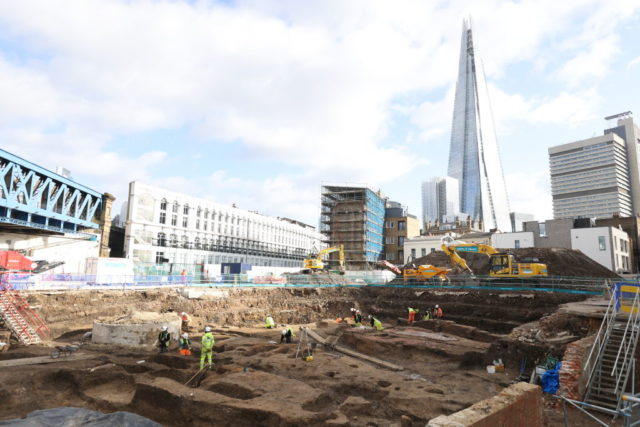 The mosaic dates back to “the heyday of Roman London,” and was uncovered earlier this year during an excavation in London’s Southwark district. The area is currently being redeveloped as part of the Liberty of Southwark project, which will see the construction of offices, shops, homes and restaurants over what was previously a parking lot.

It is comprised of two panels, the largest of which is eight meters long and dates back to around the late 2nd or early third century AD. Speaking with CNN, Sophie Jackson, MOLA’s director of developer service, said, “To actually have a whole big spread of mosaic like that in a definable room – we think it’s a dining room – is really amazing. And it looks really nice as well, it’s just really pretty, actually.” 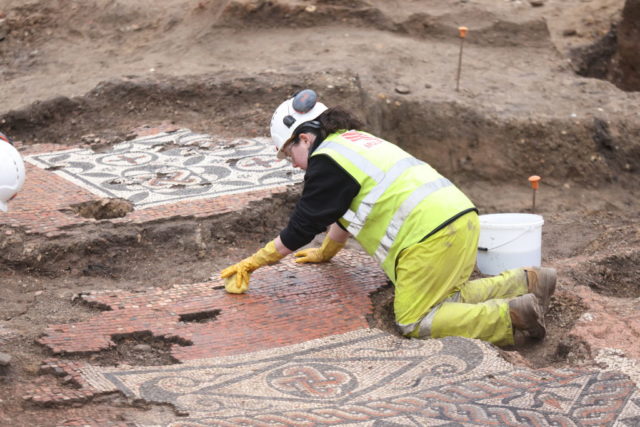 According to a press release, the dining room is believed to have been part of a Roman “mansio” – an “upmarket ‘motel’ offering accommodation, stabling, and dining facilities.” Given its size, it was most likely used by “high-ranking officers and their guests,” an assumption supported by other relics discovered at the site, including “lavishly” painted walls, coins, jewelry, terrazzo-style and mosaic floors, and decorated bone hairpins. These were normally possessed by individuals of wealth.

The larger of the two panels is adorned with “large, colorful flowers surrounded by bands of intertwining strands” known as guilloches and a Solomon’s knot. According to experts with MOLA, it was likely the work of the “Acanthus group,” a team of Roman London mosaicists known for their unique style.

The smaller panel features two Solomon knots and “stylized flowers.” It is similar to a mosaic found in Trier, Germany, suggesting there may have been a tradition of “traveling Roman artisans at work in London.” 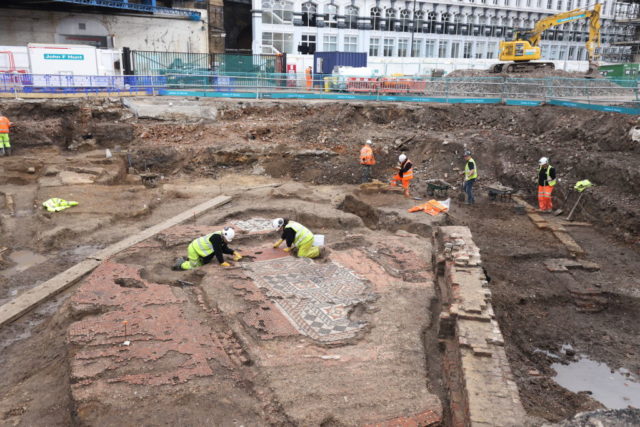 More from us: Ancient Roman Funerary Tombs, Terracotta Dog Uncovered Along the Via Latina

The mosaic will be lifted later this year for preservation work, with plans to eventually put it on public display. The rest of the Roman-era building is still being excavated, with several more rooms and corridors expected to be uncovered in the coming months.