Usually taking body parts from the deceased is considered desecration, but when influential figures pass on relics and keepsakes become an important part of remembering their legacy. From heads to fingers and even organs, visiting these six relics of famous people is as close as you will get to meeting them in person.

If you love all things creepy and morbid, be sure to add these six stops to your next vacation itinerary! 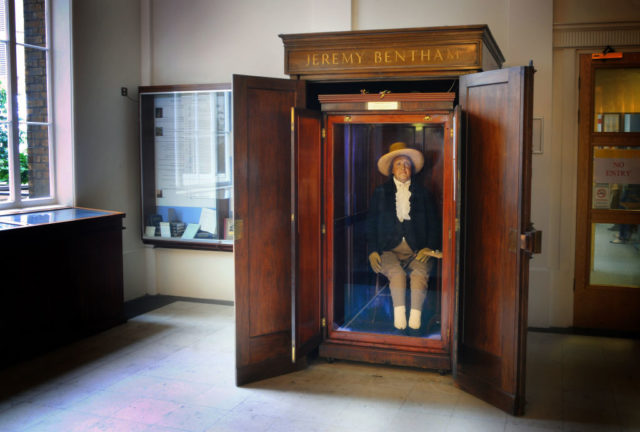 When Jeremy Bentham died in 1832, his final wish – which was recorded in his will – was revealed. Bentham left his body to his friend Dr. Thomas Southwood Smith to be used for dissections and medical education. After the dissection, Bentham requested that his skeleton and mummified head be preserved, dressed in his clothes, positioned on a chair placed in “an appropriate box or case” and posed “in the attitude I am sitting when engaged in thought”.

Bentham called this post-mortem version of himself an “auto-icon”. He believed that by displaying stuffed skeletons in a box there would be less need for paintings, statues, and memorials while also “diminishing the horrors of death”. 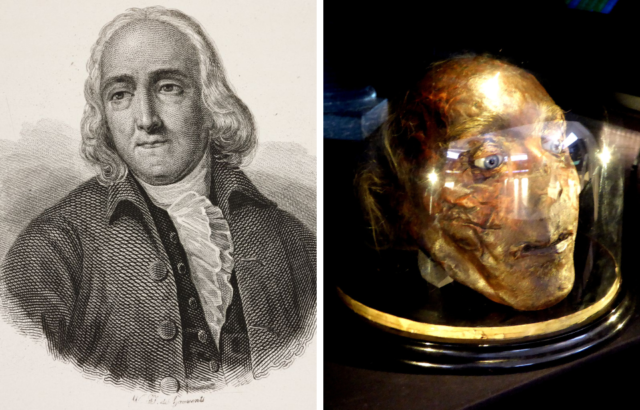 The Leg of Dan Sickles

The tibia and fibula of Union Major Gen. Daniel Sickles on display at The National Museum of Health and Science. (Photo Credit: Linda Davidson/The Washington Post via Getty Images)

Daniel Sickles was born into a wealthy family in New York City. In 1852, 32-year-old Sickles married 15-year-old Teresa Bagioli but their marriage would soon crumble. On February 27, 1859, Sickles shot and killed US District Attorney Philip Barton Key II after he discovered that Key was having an affair with his wife.

At his murder trial, Sickles pled temporary insanity – making him the first person in American history to use an insanity plea. He was ultimately acquitted of the murder charges and publicly forgave his wife for her infidelity.

When the Civil War broke out in 1861, Sickles was promoted to the rank of Major General. While at the Battle of Gettysburg, Sickles was wounded by a cannonball that hit his right leg – which needed immediate amputation. Sickles donated his mangled leg to a surgeon with a hobby of preserving specimens of human anatomy. His reconstructed tibia and fibula bones were placed on display at the National Museum of Health and Medicine, where Sickles reportedly visited his leg on the anniversary of his amputation for several years. 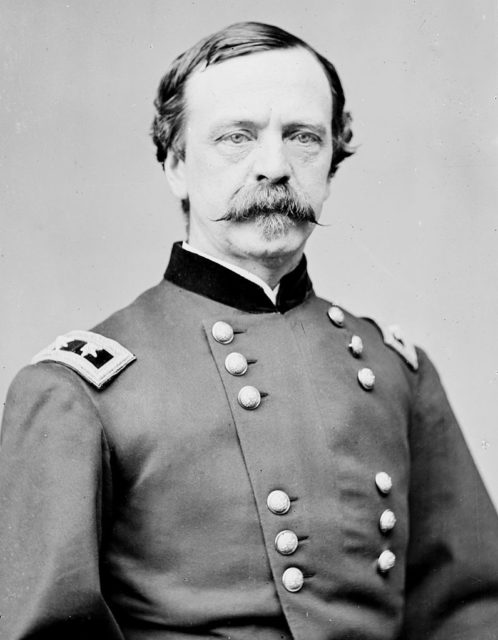 Where to visit: Daniel Sickles’ leg is still on display at the National Museum of Health and Medicine in Washington, D. C.

The Heart of King Richard I 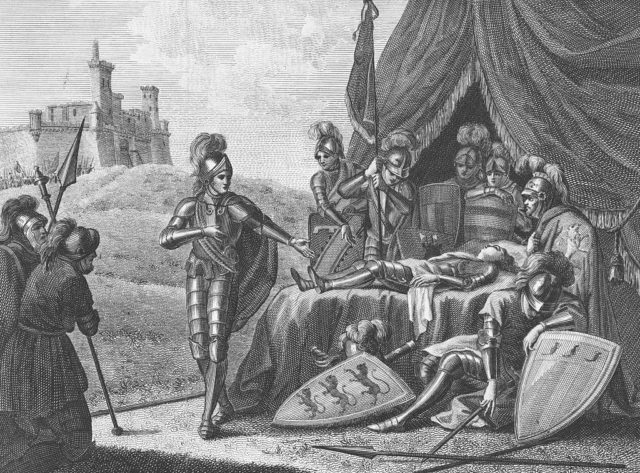 Richard The Lionhearted, King of England, at his death. (Photo Credit: Bettmann/Getty Images).

King Richard I, also known as Richard the Lionheart, was King of England from 1189 to 1199. A famous warrior, Richard I spent most of his rule on Crusades throughout Europe and the Holy Land. In April 1199 Richard I died from an infected crossbow wound. Before his death, Richard I requested that the person who shot him should be brought to him for punishment.

It was revealed that the assailant wasn’t a man at all, it was a boy named Pierre. Pierre claimed that Richard I killed his father and brothers, and his attack on the King was an act of revenge. Instead of executing him, Richard I shocked onlookers when he forgave the boy and set him free with 100 shillings.

Richard I’s heart was preserved in a mixture of frankincense and other herbs and buried in a lead box in Normandy. His entrails were also removed and buried in Chalus, France before the rest of his body was buried next to his father Henry II in Fontevraud Abbey in Anjou, France. 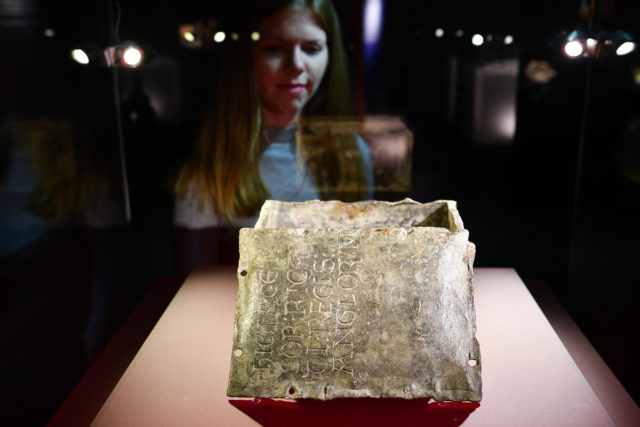 A woman looks at a lead case designed in 1199 to hold the heart of Richard I of England. (Photo Credit: Uwe Anspach/picture alliance via Getty Images)

Where to visit: You can visit the heart of Richard I at Rouen Cathedral in Normandy, France. You can also visit the lead box that originally contained Richard I’s heart at the Departmental Museum of Antiques in Rouen, France. 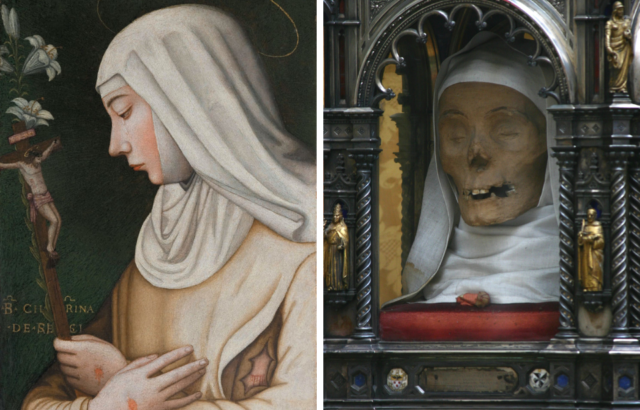 Saint Catherine of Siena – the patron Saint of Italy, protection from fire, ill people, and nurses – was the youngest of 25 children. Born in 1347 during The Black Death plague that ravaged Europe, Catherine made it clear from a young age that she wanted to devote her life to the Catholic Church. She often fasted and cut her hair short to mar her appearance and deter possible suitors.

She was known to promote church reform, which is recorded in the 380 letters, 26 prayers, and 4 treatises she wrote in her lifetime. After her death in 1380, locals in Rome reported that miracles happened at Catherine’s grave. Her body was exhumed and moved into the Church of Santa Maria sopra Minerva, and her head was taken to her hometown of Siena, Italy where it remains today as an important relic.

Where to visit: You can visit Catherine of Siena’s mummified head at the Basilica Cateriniana San Domenico in Siena, Italy. 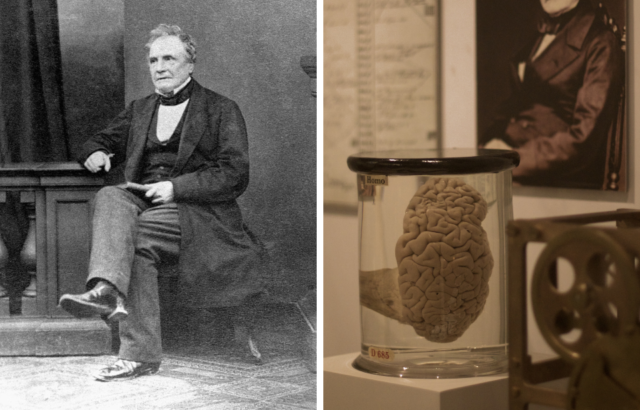 We have Charles Babbage and his brain to thank for the technologies we use every day! Babbage was a celebrated mathematician and inventor who was fascinated by the prospect of using machines to calculate mathematical tables. He created The Difference Engine in 1823, which was a primitive digital machine similar to what we know today as a computer.

After The Difference Engine, Babbage made plans to create The Analytical Engine which used punch card instructions and a memory unit to store numbers. The machine could hold 1,000 50-digit numbers – that’s more storage capacity than any computer built before 1960!

Like many great-thinkers of the 19th century, Babbage’s brain was removed after his death and kept in a jar. One-half of his brain was donated to the London Museum of Science, and the other half resides at the Hunterian Museum in Scotland. The London Museum of Science has a special connection to Babbage, a team of engineers came together to create The Analytical Engine No. 2 which Babbage designed but never completed.

Where to visit: You can visit Babbage’s brain in the Maths and Computing gallery on the 2nd floor of the London Museum of Science!

The Perfectly Preserved Body of Lenin 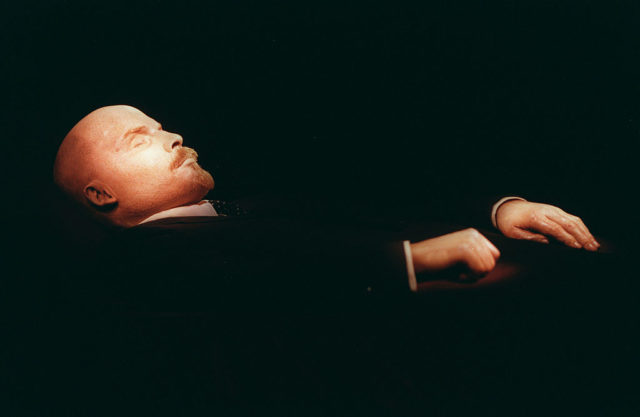 Lenin’s body is fully visible in the tomb, circa 1997. (Photo Credit: Georges DeKeerle/Sygma via Getty Images)

Vladimir Lenin, Russian revolutionary and former Premier of the Soviet Union, died in 1924. But if you visited his mausoleum in Moscow’s Red Square today, you would think he was just taking a nap. Lenin’s body was embalmed for long-term preservation to allow for a permanent display within the mausoleum. Except for concerns during WWII that forced Russia to hide it for safekeeping, the modern mummy has been a main attraction of the Red Square for nearly 100 years.

Where to visit: If you ever find yourself visiting the Kremlin or enjoying the amazing architecture of Saint Basil’s Cathedral in Moscow’s Red Square, be sure to make time to pay your respect to a revered, “undying” Russian figure.

« Bodies Surface Amid Dropping Water Levels at Lake Mead – Is There a Mob Connection?
Meet Robert Ressler – The Man Who Coined The Term ‘Serial Killer’ »