Richard III has gone down in history for murdering his two nephews to protect his throne. However, according to a new study, Richard III might be innocent of the murder of his nephews in the Tower of London. We take a look at this shocking, history-altering claim here.

King Richard and the disappearance of his nephews 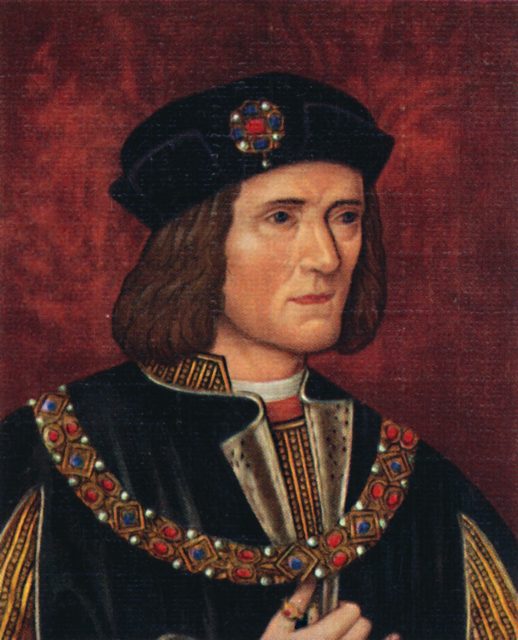 Despite ruling England for only two years, King Richard III’s reign has often been remembered as one of the most turbulent in history. King Richard III was supposedly extremely power-hungry, often held responsible for several murders – including his two nephews, Edward and Richard.

In April 1483, King Edward IV suddenly died. King Edward’s son, Edward V, was set to take the English throne but was only 12 years old when his father died. As a result, Edward V’s uncle, Richard III, took control of his nephew in May 1483 and self-appointed himself as king’s lord protector. At this point, both Edward and his younger brother Richard were taken into Edward III’s custody.

The brothers were both imprisoned in the Tower of London, where they would spend the rest of their days. Richard III also had Lord Hastings executed. Lord Hastings was a trusted advisor to Edward IV and was extremely loyal to Edward V. 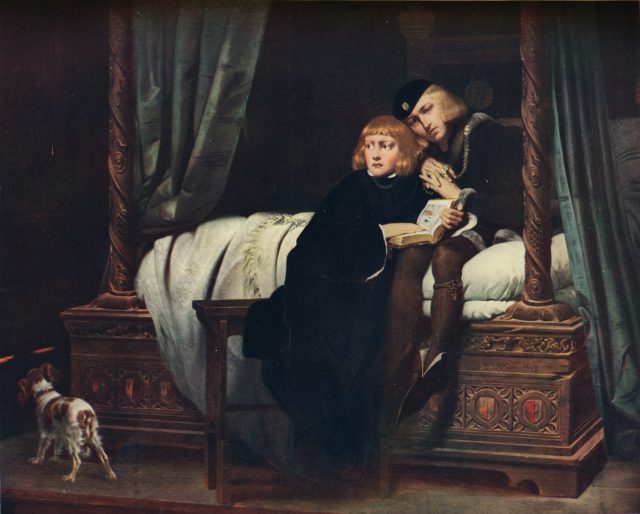 In June 1483, Richard III was crowned King of England. After his coronation, he left to tour his kingdom. However, while he was away, he received news that there had been an unsuccessful attempt to rescue his nephews from the Tower of London. Many people believe that this event led to the princes’ murders. After August 1483, the two princes were never seen again.

According to Thomas More’s History of King Richard III, written between 1513 and 1518, Richard III ordered the death of his nephews after he imprisoned them in the Tower of London and had Lord Hastings killed. According to More, Richard’s henchmen crept into the princes’ Tower of London bedchamber in the middle of the night, “keeping down by force the featherbed and pillows hard unto their mouths, that within a while, smothered and stifled, their breath failing, they gave up to God their innocent souls.”

In 1674, two skeletons were found buried beneath a stone staircase at the Tower of London. Previously, many people believed that these skeletons were the remains of the two princes. However, the identity of the skeletons has ultimately never been confirmed. 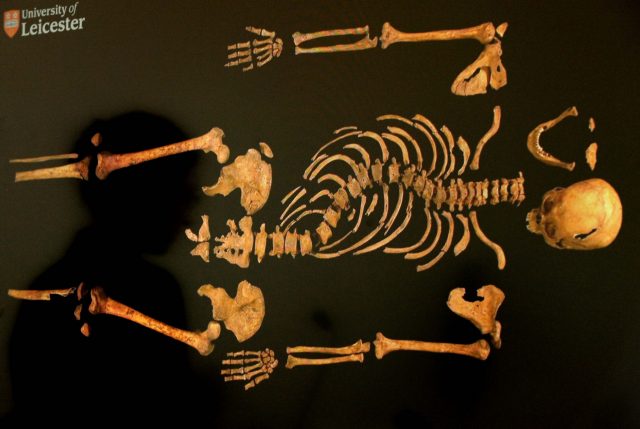 A view of the skeleton of Richard III as seen during a press conference at the University of Leicester. (Photo Credit: Rui Vieira – PA Images / Getty Images)

The prevalent theory that existed for the last 500 years is that Richard III had ordered his nephews to be killed in the summer of 1483. This theory may be disputed according to the interpretation of clues found in a church in Devon.

Historian Philippa Langley led this new study as part of the Missing Princes Project. In 2012, Philippa Langley discovered the skeleton of Richard III in a parking lot in Leicester. The research team followed a trail of medieval documents to a small village in rural Devon, where they discovered that royal Yorkist symbols had been carved into the local church, Saint Matthew’s.

Inside the church, the research team discovered an effigy of a man named “John Evans,” who stares directly at a stained glass window that depicts one of the missing princes, Edward V. This led researchers to believe that “John Evans” and Edward V were the same person. 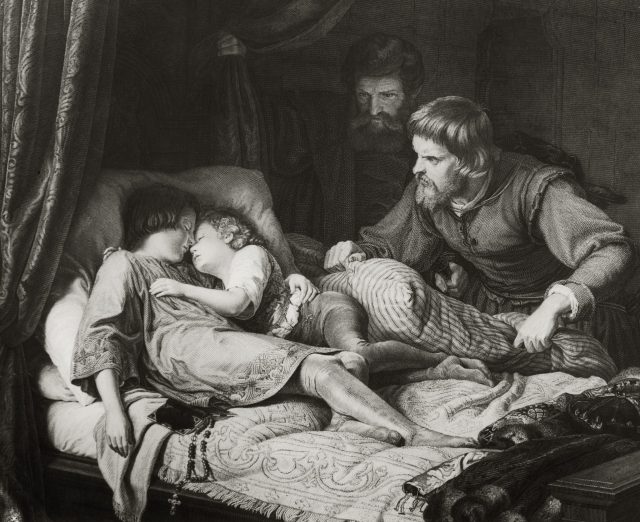 This discovery has led the research team to theorize that Edward V was never killed by his uncle. Instead, he was sent to live out the rest of his life in Devon. Edward V’s half-brother, Thomas Grey, Marquis of Dorset, owned land in Devon, so it would make sense why Edward V was sent to this remote area.

In March 1484, Elizabeth Woodville, the mother of the two princes, reached a deal with Richard III and left Westminster with her daughters. She then wrote to her exiled son, Thomas Grey, Marquis of Dorset, asking him to come home, as Richard III had agreed to pardon him. Strangely, there was no mention of the two young princes made in this letter. However, according to royal documents, Richard III sent a trusted follower named Robert Markenfield on an unknown mission from Yorkshire to a remote Devon village that lay within Thomas Grey’s land. Shortly after this, John Evans arrived in the same village.

John Evans was granted the titles Lord of the Manor and “Parker” of the park that ran behind St. Matthew’s church. Interestingly enough, no records of a John Evans appeared before he arrived in Devon. As lead researcher John Dike points out, “this man John Evans was given these prestigious titles despite apparently arriving out of the blue, which is odd to say the least. It is possible that Edward was sent her to live in secret as part of the deal that we know was agreed between Richard and his mother.” 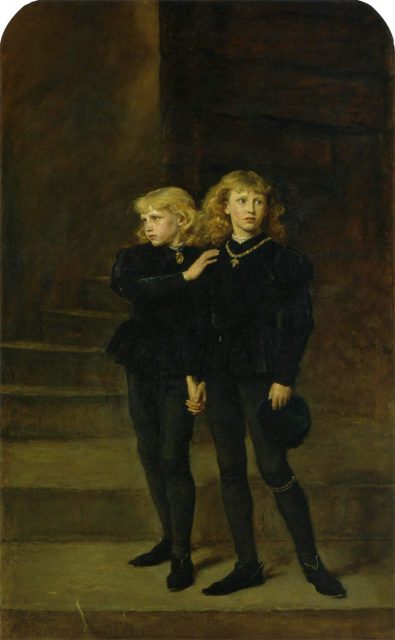 To make matters even more interesting, only two other glass portraits of Edward V exist, with one being in the royal window of Canterbury Cathedral. So why would there be a royal portrait of Edward V in a small rural church in the middle of nowhere? John Dike believes that this stained glass window of Edward V is John Evans trying to send a message.

Another clue associated with the real identity of this mysterious John Evans has to do with the detail on the stained glass crown located above Edward V’s head. The crown’s lining is dotted with pictures of 41 tiny deer. According to an inscription found on the prayer desks, John Evans built the chantry in 1511 when the real Edward V would have been 41 years old.

There are other symbols and clues riddled throughout the church that could potentially connect the mysterious John Evans with Edward V. As John Dike told the Telegraph, “the idea of a missing prince lying low in Devon might be fanciful at first.”

More from us: Celebrities With Surprising Ancestors (including one related to Richard III!)

“With all the secret symbols and clues, it sounds somewhat like the Da Vinci Code. But the discoveries inside this church in the middle of nowhere are extraordinary… Once you take all the clues together it does appear that the story of the princes in the Tower may need to be rewritten.”

« These Ancient Technologies Are a Mystery to Us, Even Today
Boba Fett Creator on Disney+ Series: “I Never Would Have Shown His Face” »