Archaeologists in Egypt announced this week that they have unearthed a trove of hundreds of 2,500-year-old coffins, statues and other ancient artifacts at the necropolis of Saqqara, near Cairo. The discovery includes 250 sarcophagi – or painted coffins – and 150 bronze statues of deities. According to Egypt’s Ministry of Tourism and Antiquities, the items date to the Late Period, about 500 BCE.

Saqqara, which lies to the south of the Giza pyramids, has been a frequent source of archaeological discoveries in recent years, and has been under excavation since 2018. 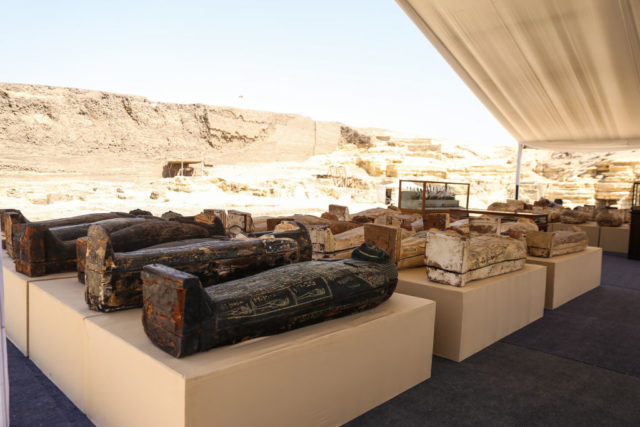 The discovery of coffins dating back more than 2,500 years, which were revealed in the ancient Saqqara ring, during an official conference attended by Mustafa Al-Waziri, Secretary-General of the Supreme Council of Egyptian Antiquities, May 30, 2022. (Photo Crdit: Ziad Ahmed / NurPhoto / Getty Images)

Burial shafts at a cemetery in Saqqara had protected the painted wooden coffins, which were found intact and held mummies, amulets and wooden boxes. The large collection of bronze items was unearthed in the Bubastian cemetery, named after the ancient goddess Bastet who was often portrayed as a cat-headed woman.

Wooden statues of Isis and Nephthys, both of which have gilded faces, date to an earlier period. 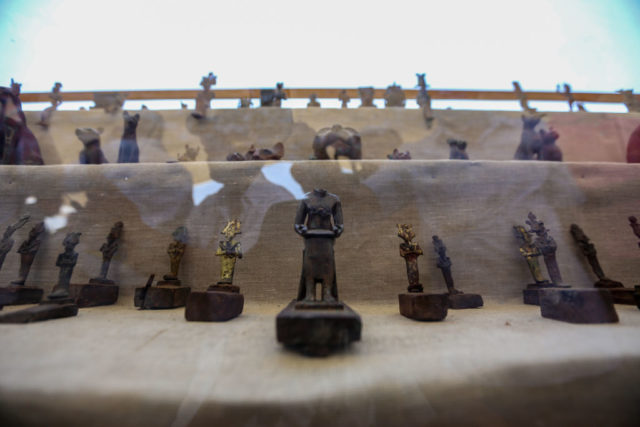 Mostafa Al-Waziri, the secretary-general of Egypt’s Supreme Council of Antiquities, revealed an especially exciting discovery. “In one of the wooden sarcophagi, we found, for the first time, a complete and sealed papyrus,” he said. The papyrus is written in hieroglyphs and was sent to the laboratory of the Egyptian Museum in Cairo for further research. It’s thought they might be verses from the Book of the Dead or the Book of the Gates, both ancient funerary texts.

Smaller artifacts include a musical instrument from the percussion family called a sistrum, as well as a number of bronze vessels used in the worship of Isis. The sistrum would have been shaken during religious rituals or when coming into the presence of a deity.

Additionally, several cosmetic items were located, including kohl containers and jewelry in the form of earrings and bracelets. 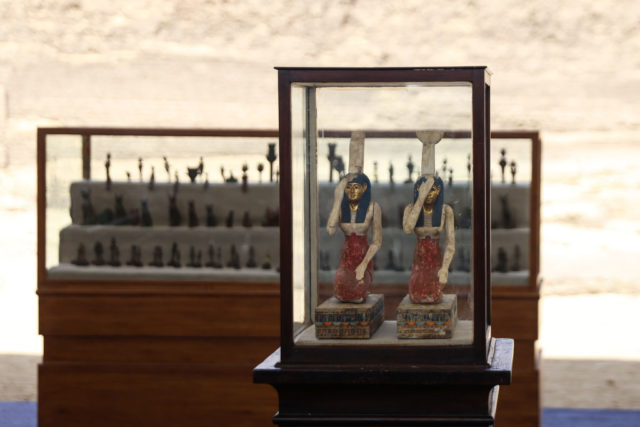 The Grand Egyptian Museum, which is currently under construction, will display the coffins when it opens in late 2022. Egypt’s economy has suffered in the past decade as tourism has slowed down due political chaos, the coronavirus pandemic and, most recently, the Russian invasion of Ukraine. Many of the country’s tourists hail from that region.

The Egyptian government is hopeful this and a slew of other recent archaeological finds will provide a big boost to the country’s tourism industry, bringing much-needed foreign money and creating new jobs.

There have been a number of other significant digs in the area in recent years, including the 2021 discovery of 16 human burial chambers on the outskirts of Alexandria. Some of these contained mummies with golden tongues, which officials said allowed them to “speak in the afterlife.”

Later that year, archaeologists found what’s believed to be the world’s oldest brewery. The 5,000-year-old brewery, discovered in the southern city of Soha, was used to make beer used in burial rituals for Egypt’s early kings. And in April 2021, researchers announced the discovery of a 3,000-year-old “lost golden city” in Luxor, which is considered to be the biggest find since Tutankhamen’s tomb was located in 1922.