Constantine The Great: The Christian Conqueror of Ancient Rome

Constantine I was the first and only Roman Emperor to be granted the title “The Great.” A revolutionary and unstoppable force, Constantine was also the first Emperor to convert to Christianity, initiating the creation of a new Roman Empire that would eventually lead to its downfall.

Who was Constantine the Great?

Constantine was born in the city of Naissus (now modern Serbia) on February 27, 272 AD. His father, Flavius Constantius, was one of the imperial bodyguards of then-ruler Emperor Aurelian. Constantine’s mother was a poor Greek woman named Helena, likely a mistress of Constantius. 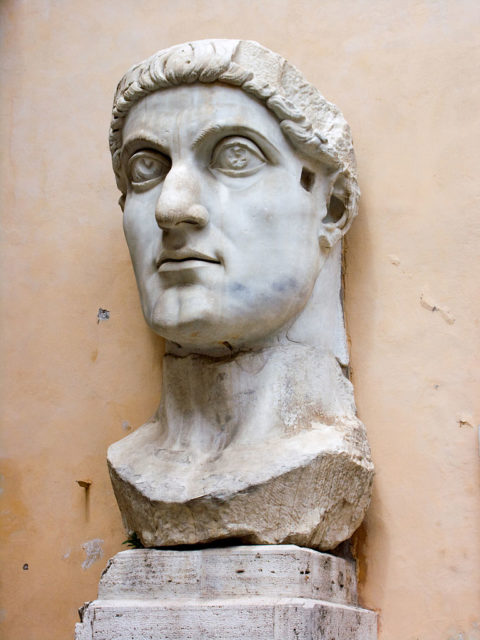 Constantius rose through the ranks of the Roman Army quickly, eventually becoming governor of the Roman province Dalmatia. In 284 AD, Emperor Diocletian became the new ruler of the Roman Empire. Several years later, Diocletian appointed his close friend Maximian as his co-Emperor.

In 288 AD, Maximian declared that Constantius would join his praetorian prefect, or “high office,” in the city of Gaul – which is now comprised of France, Luxemburg, Belgium, and Switzerland. Later on, Maximian would appoint Constantius to Caesar in the Tetrarchy of Diocletian. During this time, Constantine came of age and served as his father’s heir presumptive until his death in 306 AD. 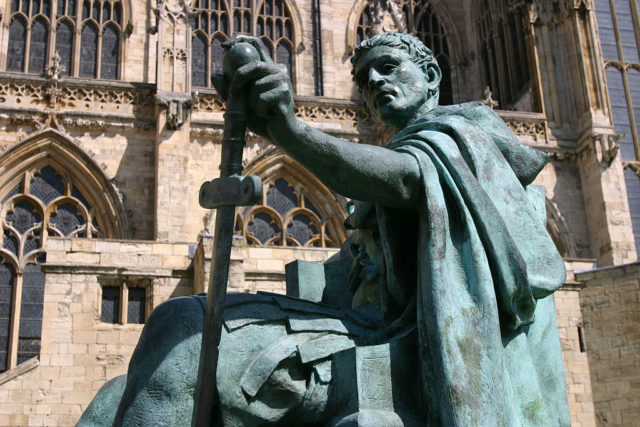 Statue of Constantine the Great at York which stands on the spot where he was proclaimed Emperor by his soldiers in 306 after the death of his father Constantius Chlorus. (Photo Credit: Peter Thompson/Heritage Images/Getty Images).

Growing up, Constantine mingled with both pagans and Christians, though he was raised pagan he was tolerant of both religions. Constantine fought for Diocletian in several wars throughout Syria, Mesopotamia, and even Britain. It was here in York, England that Constantius died in 306 AD. Prior to his death, he declared his support to make his son Constantine an Augustus – and the provinces of Gaul and Britain soon followed suit.

Constantine declared himself Caesar, which directly challenged his co-ruler Maxentius. As the new Emperor of Rome, Constantine ruled over one of the largest Roman armies in Gaul, Britain, and Spain. He ordered massive building projects in the Gaulian capital of Trier, which included renewed fortifications, a large palace complex, a formal audience hall, and an imperial bathhouse. Soon after the start of his reign, many commented that Constantine’s rule was similar to that of his father’s.

By 311 AD, Constantine continued to rule over the Western empire and a new ruler, Licinius, controlled the East. Maxentius felt betrayed by his sudden loss of power and launched a revenge war against Constantine. Maxentius seized control over Italy as Constantine moved into Milan to win it back. 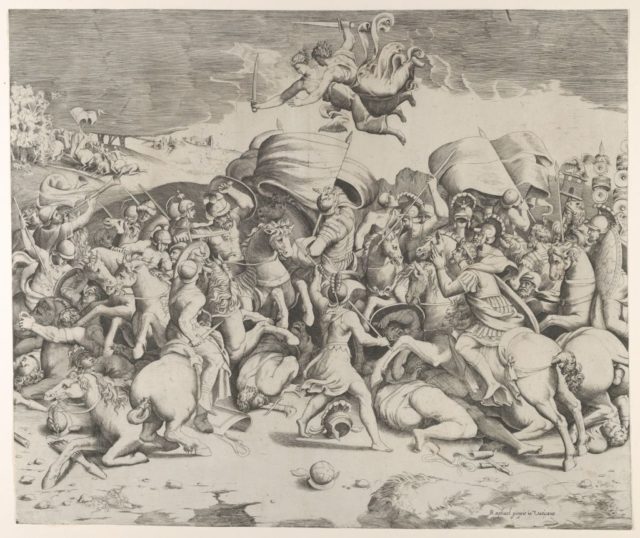 As Constantine marched on Maxentius, his army, for the first time, carried banners inscribed with the Greek letters X (chi) and P (rho) – spelling “Christ.” Constantine claimed that God had spoken to him and instructed him to make the banners to ensure their victory – regardless of if the banners helped, Constantine’s army defeated Maxentius.

As a newly-minted Christian, Constantine set his sights on his opposing emperor Licinius – who had supposedly persecuted the Christians in the Eastern Roman Empire. Weeks of fighting between Constantine and Licinius eventually drove the pagan ruler to surrender his throne in exchange for his life. Constantine promised to spare Licinius, but once he had seized power, had him executed. 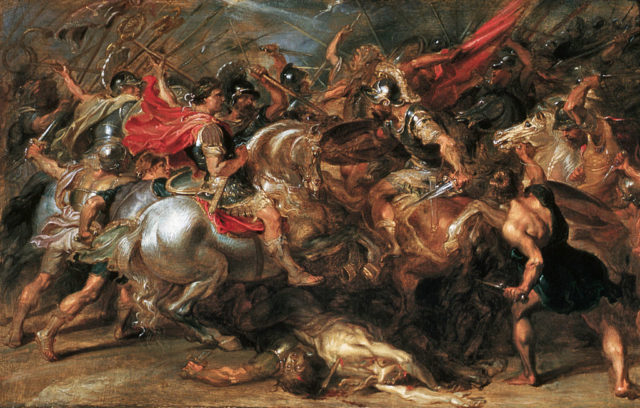 The Battle of Constantine and Licinius by Peter Paul Rubens, circa 1622. (Photo Credit: Barney Burstein/Corbis Historical via. Getty Images).

Constantine’s predecessor Diocletian had chosen Nicomedia (in present-day Turkey) as his seat of power in the East, but the new emperor recognized the shifting of the center of his empire toward Byzantium, located at the precipice of Egypt, Asia, and the province of Thrace. Here he chose to establish a new capital of the Eastern Roman Empire, Constantinople. 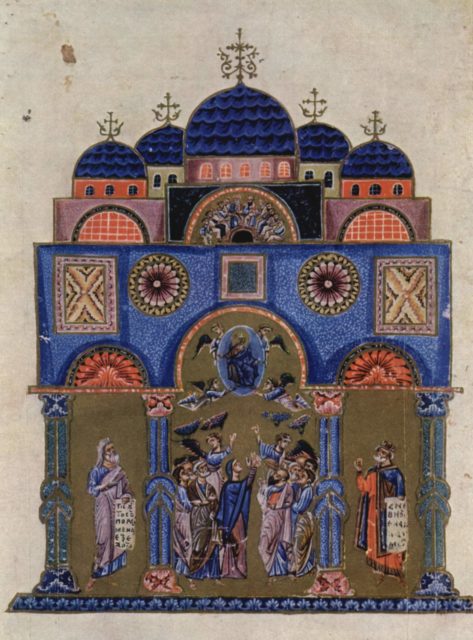 Illumination from the Vatican Codex which is believed to represent the Church of the Holy Apostles in Constantinople. (Photo Credit: James of Kokkinobaphos/Biblioteca Apostolica Vaticana via. Wikimedia Commons/Public Domain).

Constantinople became a hub for Christian learning and cultural preservation. The city housed famous relics like the True Cross, which was believed to be the exact cross Jesus Christ was crucified on 300 years earlier, and the Rod of Moses. Constantine built the Holy Church of the Holy Apostles on top of the old temple of the Greek Goddess Aphrodite.

The converted Christian emperor also took charge of new religious policy in the Roman Empire to combat the growing animosity between Roman pagans and Christians. As an effort to ease tensions, Constantine first legalized Christianity and banned Christians from taking part in the pagan religion, which relieved fighting over non-participating Christians. 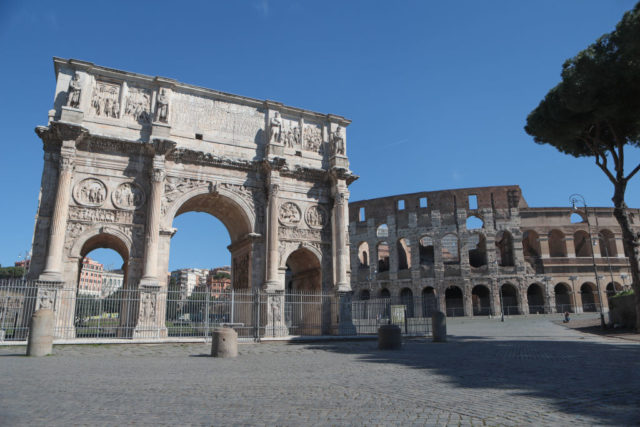 The Arch of Constantine stands in the shadow of the Colosseum in Rome, Italy. (Photo Credit: Andrea Pirri/NurPhoto via Getty Images).

In an effort to increase social harmony, Constantine assembled a council of bishops who traveled to the city of Nicaea to teach the public about the basic tenants of Christianity. By removing the intense persecution against Christians throughout the Empire and declaring that the Christians could follow their faith without oppression, Constantine changed religious policy practically overnight.

The inner world of an emperor

Constantine feared that he would meet the fate of many Roman emperors before him: a military coup ending in assassination. To minimize his chances of sharing the same fate as Julius Caesar, Constantine re-organized the entire senate system to give power to provincial governors he trusted. 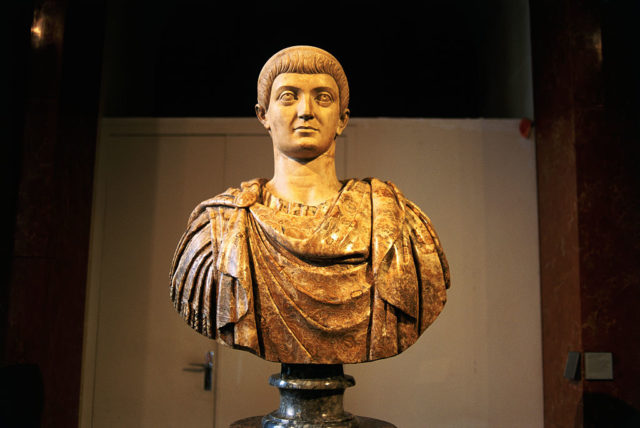 The Emperor also simplified the Roman Army by disbanding legions that he believed were threatening while streamlining the capabilities of armaments to keep possible military traitors far away from the capital.

Constantine wasn’t the only one in his family who reached international fame. His mother Helena became Saint Helena of Constantinople after undertaking a pilgrimage to the Holy Land. She supposedly rediscovered the True Cross. 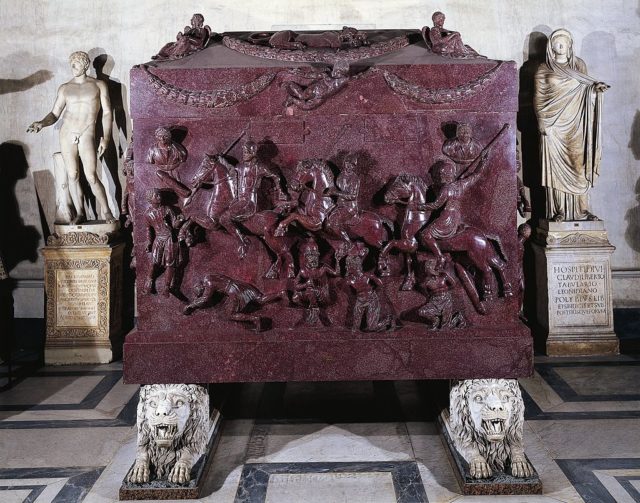 Not all of Constantine’s family were saints; in fact, his oldest son Crispus and his wife Empress Fausta were both put to death at the Emperor’s behest. Their names and images were all but erased from the historic record, and at the time many speculated that Crispus and Fausta were in an illicit relationship. Crispus was poisoned in June 326 AD and Fausta followed a month later, dying in an overheated bath.

The end of an empire

Constantine met his own end on May 22, 337 AD. After a lengthy illness, Constantine hoped to be baptized before his death in the River Jordan. But the sick Emperor never made it to the Holy Land, dying while trying to reach his city of Constantinople. His body was buried at the Church of the Holy Apostles but was later desecrated and destroyed during the Fourth Crusade in 1204. 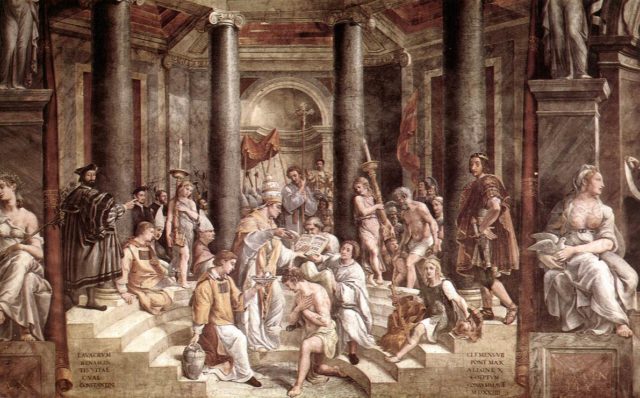 The Church of the Holy Apostles was also destroyed during the Crusades, and the location of Constantine’s burial site is lost to the sands of time forever. His sons Constantine II, Constantius II, and Constans ruled the Empire after their father. During his reign, Constantine the Great re-united Ancient Rome under one emperor and expanded his empire into what would become Europe.