Just before the ‘Roswell incident’ occurred in 1947, America was experiencing UFO mania. Storied had been published all over the nation describing sightings of flying discs and saucers in the sky. The difference this time was the US Army got involved and couldn’t seem to get their story straight. For years, questions behind the truth of what was found in Roswell, New Mexico that summer have sparked a hoard of conspiracy theories, hoaxes, and tourist interest, making the Roswell incident just as intriguing 75 years later.

Debris from a ‘flying disc’ found 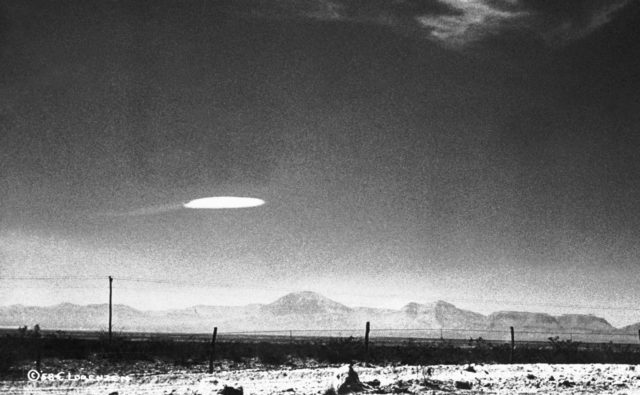 A UFO variety was photographed when it hovered for fifteen minutes in New Mexico. The object was photographed by a government employee and was released by the Aerial Phenomena Research Organization after careful study. There is no conventional explanation for the object. (Photo Credit: Bettmann / Getty Images)

W. W. “Mac” Brazel, a rancher from New Mexico, spotted strange wreckage on his property in July of 1947. The wreckage consisted of rubber strips, tinfoil, and some kind of thick paper. Aware of the news stories about mysterious flying discs, Brazel brought the material to Sheriff George Wilcox, who then brought it to the attention of Colonel William Blanchard, commanding officer of the Roswell Army Air Field (RAAF).

Major Jesse Marcel, an intelligence officer, visited the wreckage site and observed the materials there. The RAAF then released a statement later the next day reporting that “the many rumors regarding the flying disc became a reality yesterday when the intelligence office of the 509th Bomb Group of the Eighth Air Force Roswell Army Field, was fortunate enough to gain possession of a disc through the cooperation of one of the local ranchers and the sheriff’s office of Chaves County.”

The Roswell Daily Record published a headline following their statement that read, “RAAF Captures Flying Saucer On Ranch in Roswell Region.” But then, US Army officials backpedaled and changed their claim of a flying disc, marking the beginning of Roswell conspiracy theories. 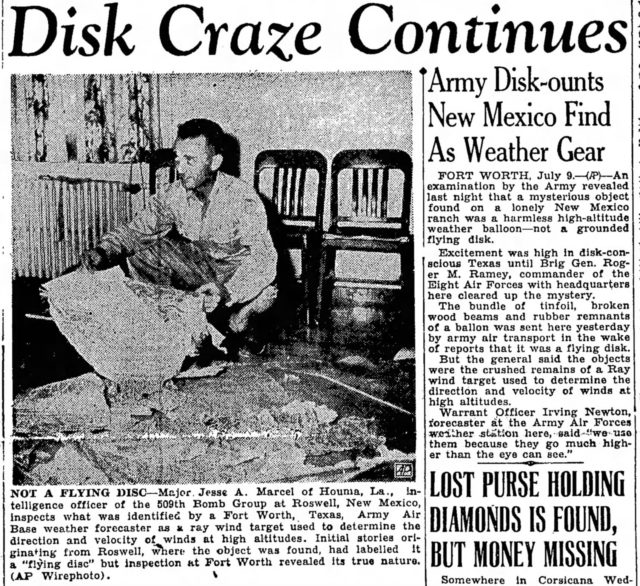 Jesse Marcel, head intelligence officer, who initially investigated and recovered some of the debris from the Roswell UFO site 1947. In mid-1947, a United States Air Force balloon crashed at a ranch near Roswell, New Mexico. Following wide initial interest in the crashed ‘flying disc’, the US military stated that it was merely a conventional weather balloon. (Photo Credit: Universal History Archive / Universal Images Group / Getty Images)

When the US Army went back on its claim, The Roswell Morning Dispatch ran a story with a new headline: “Army Debunks Roswell Flying Disk as World Simmers with Excitement.” They insisted that instead of a flying saucer, as they had originally claimed, the wreckage found was actually debris from a weather balloon. They even went so far as to take a photo of Marcel with fragments of a weather balloon to offer some proof of their new claim.

Some have suggested that the US Army ran with the flying saucer story as a convenient one to explain the suspicious wreckage. But if the wreckage were something that they needed to cover up, why would they choose a story that would draw so much attention?

One UFO researcher, Donald Schmitt, explained just how little sense this cover-up story made. “Two hours west of Roswell the first atomic bomb was detonated. You had ongoing atomic research at Los Alamos,” he said. “You had all this testing of captured German V-2 rockets at White Sands. And at Roswell, you had the first atomic bomb squadron headquartered. The thought that they would have intentionally set up any type of publicity as a distraction? If anything, they needed less attention.”

The government changes the story… again 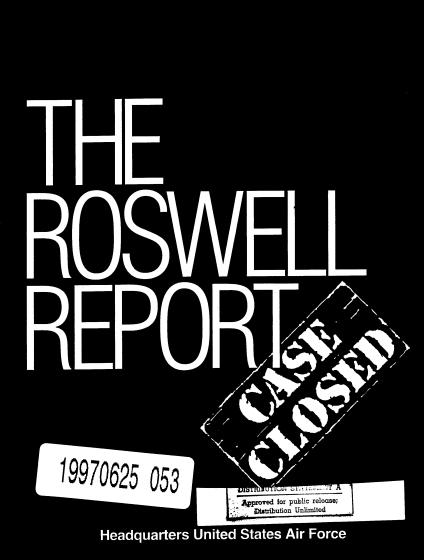 The truth about the Roswell wreckage remained a mystery for decades, but in 1994, the government changed the story once again. They released a report that outlined what they claim as the truth behind the suspicious wreckage found near Roswell, one that they hoped would answer any lingering questions.

The report described how the fragments found on the ranch that year were actually from a spy device created from a high-altitude balloon that was to be equipped with microphones. Their intent was to float silently and secretly above the USSR in order to detect sound waves. This balloon would then alert the US of any Soviet attempts to test their own atomic bomb.

The balloon was a part of Project Mogul, and the cover-up attempt back in the late 1940s was in order to prevent releasing any information on the otherwise covert operation. Another report released in 1997 went into even more depth about Project Mogul, explaining how any eyewitnesses who claimed to have seen “aliens” being dragged away actually saw parachute test dummies being gathered. 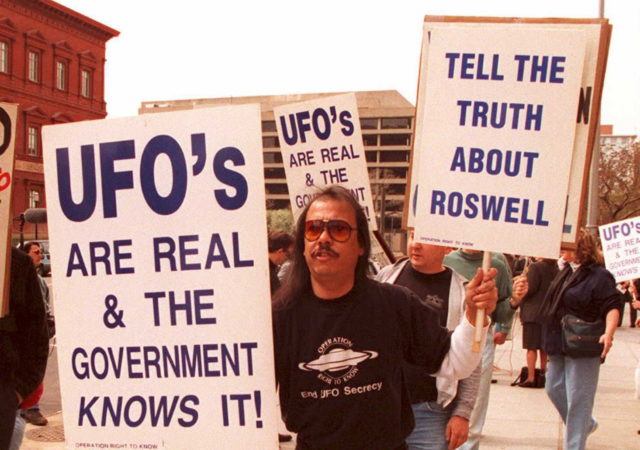 A group of protestors march in front of the General Accounting Office march to raise awareness about an examination being conducted by the GAO for documents about a weather balloon crash at Roswell, N.M. in 1947. The protestors believe the balloon was a crashed UFO. (Photo Credit: JOSHUA ROBERTS / AFP / Getty Images)

Despite these reports claiming the truth about the Roswell incident, there are still skeptics. Conspiracy theories trying to explain what really happened in Roswell have popped up all over. One theory suggests that Joseph Stalin actually planted the wreckage to induce widespread panic among the American public, and children who were captured by the Soviets were used as “aliens” walking around the wreckage. Research into this claim shows that there is no evidence in any Soviet archives that a plan such as this existed.

Additionally, Jesse Marcel Jr., son of Marcel Sr., wrote a book describing his experience with the items from the wreckage as a child. He recalled, “I could see what looked like writing. At first I thought of Egyptian hieroglyphics, but there were no animal outlines or figures. They weren’t mathematical figures either; they were more like geometric symbols – squares, circles, triangles, pyramids, and the like.” If that is the case, then perhaps Marcel Jr. was reading script in an alien language.

Marcel Jr. was only 11 years old at the time, so many wonder if his account can be considered reliable or not. 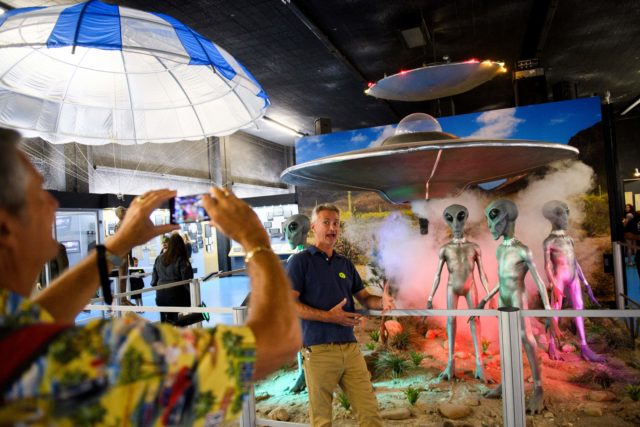 More from us: These Iconic Celebrities Believe In Aliens… And They Might Not Be Who You Expect

The media coverage and the persistence of conspiracy theories surrounding the Roswell incident has caused Roswell, New Mexico to gain its place on the map. It is home to the International Museum and Research Center, a flying saucer-shaped McDonald’s, alien-themed streetlights, and is host to an annual UFO festival. People from all over the world curious about UFO sightings and the Roswell incident have flooded the city to try and discover for themselves what really happened in the summer of 1947.