Lemuria: The Mythical Lost Continent That (Almost) Turned Out to Be Real

Science in the 1800s was more like a shot in the dark than the precise research we see now. Today, we have scientific advancements in everything from DNA to geology, but back in the day, much “research” involved throwing wild theories around and seeing what stuck. One of the strangest theories by far was the existence of Lemuria, a hidden continent that sank deep beneath the Indian Ocean.

The long-lost continent was supposedly home to an extinct species of giant-sized humanoids with four arms. The craziest part of all? They could be our ancestors!

The ‘creation’ of Lemuria

The theory of Lemuria was first proposed in 1864 by British zoologist Philip Sclater in a paper titled “The Mammals of Madagascar,” which was published in the Quarterly Journal of Science. Sclater was looking to explain the phenomenon of biogeography, or the science of understanding the geographic distribution of different species throughout the globe over time. 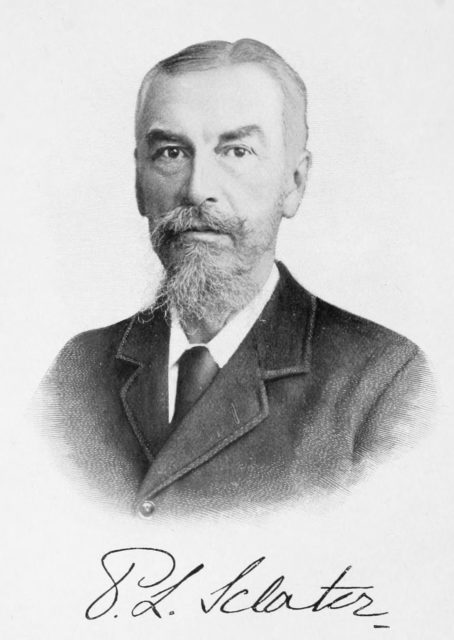 Lemuria, claimed Sclater, was an ancient land bridge that connected Madagascar, Australia, and the southern tip of India before it sank into the Indian Ocean. Sclater was puzzled by the presence of primate fossils found in Madagascar and India and why similar fossils were not found in Africa and the Middle East.

He proposed that Madagascar and India must have been connected as part of a larger continent – which was actually correct. Sclater had accurately guessed the existence of a proven sunken continent, Mauritia, which scientists didn’t discover until 2017. Mauritia was a microcontinent that once connected Madagascar and India until it separated and sank 70 million years ago. 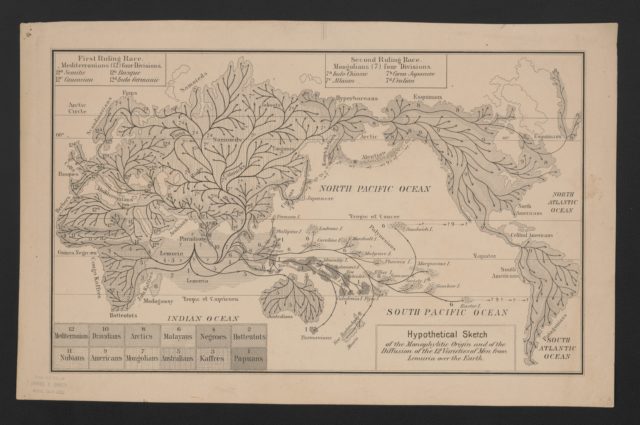 Hypothetical sketch of the monophyletic origin and of the diffusion of the 12 varieties of men from Lemuria over the earth, circa 1876. (Photo Credit: Library of Congress / Wikimedia Commons / Public Domain)

Sclater suggested his lost continent should be called Lemuria after its supposed connection to lemurs. In 1870, Sclater wrote why he believed Lemuria was the first home of humans: “The probable primeval home or ‘Paradise’ is here assumed to be Lemuria, a tropical continent at present lying below the level of the Indian Ocean, the former existence of which in the tertiary period seems very probable from numerous facts in animal and vegetable geography.”

The theory of Lemuria was actually very sophisticated for its time. Sclater had suggested the existence of ancient geological formations before anyone knew about continental drift and plate tectonics.

Sclater’s theory took off and was especially popular amongst Victorian occultists. One such occultist was Helena Blavatsky, the founder of the Theosophy movement, who made Lemuria part of her religious doctrine by teaching that the lost continent was the birthplace of humanity. Blavatsky called these human ancestors Lemurians, a mystical society of enlightened beings who lived in “heaven on Earth.” 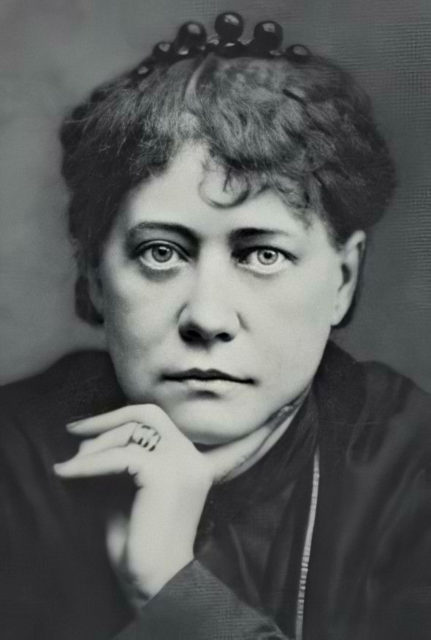 In her 1888 book The Secret Doctrine, Blavatsky proposed that the Lemurians were one of seven ancient “root races” of humanity. The Lemurians were 15-foot-tall hermaphrodites with four arms that ran wild alongside dinosaurs.

Some believers think that the Lemurians are still living today! One esoteric website claims that the Lemurians were a highly advanced society that lived underwater once the continent sank, similar to the lost civilization of Atlantis. Others believe the Lemurians now live on Mount Shasta in California. Still others think that a rare kind of quartz only found in Brazil, called Lemurian Seed Quartz, was used by the Lemurians to encode their secret knowledge for future generations.

Tamil writer Devaneya Pavanar has connected Lemuria to a legendary sunken land known in Tamil literature as Kumari Kandam. It is believed that Kumari Kandam was the cradle of civilization, home to 49 settlements of ancient Tamil nations.

Lemuria became an important variable for the Tamil people who were looking to legitimize the existence of Kumari Kandam and ultimately prove their sovereignty as a Sri Lankan nation separate from the influences of neighboring India.

While the scientific credibility of Lemuria faded long ago, it continues to capture our imaginations throughout popular culture. In the Marvel comics universe, the land-ruling Lemurians are part of the seven kingdoms in the Aquaman franchise. 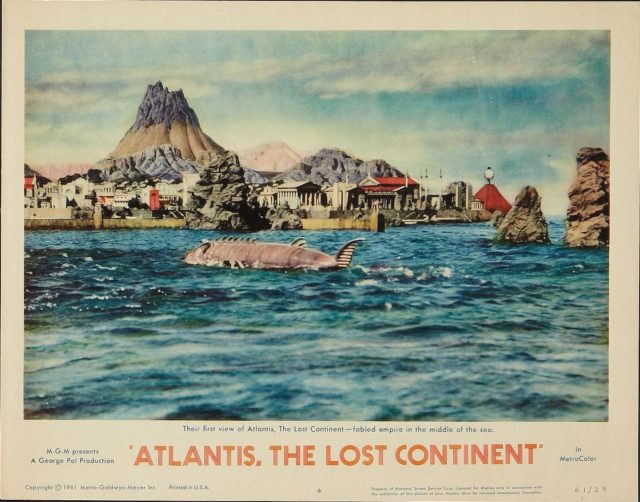 A still from Atlantis, The Lost Continent (1961). (Photo Credit: Metro-Goldwyn-Mayer / 1608kb via MovieStillsDB)

Chronicles of Narnia author C. S. Lewis published a poem called “The Last of the Wine” which also references Lemuria alongside Atlantis:

“A man to have come from Atlantis eastward sailing —

Lemuria has fallen in the fury of a tidal wave;

The cities are fallen; the pitiless, all prevailing.”

The biggest question surrounding Lemuria is: was Sclater’s theory right? Was Lemuria an actual continent that could explain the similar fossils scattered throughout the Indian Ocean? The answer is yes – well, almost. 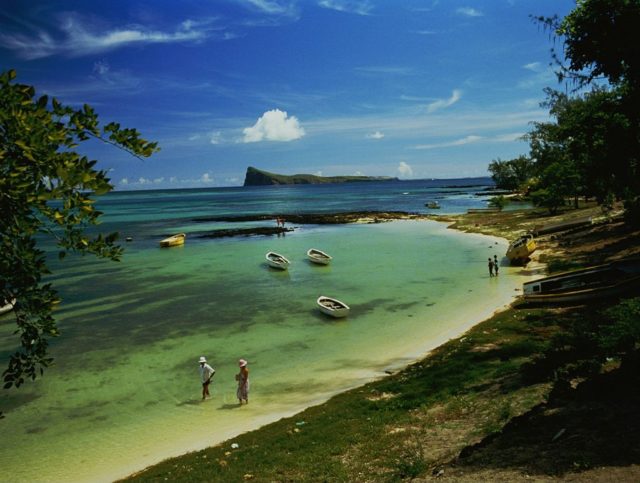 In 2013, scientists discovered fragments of granite in the ocean south of India toward the island country Mauritius. On Mauritius, geologists found the mineral zircon which matched the granite found in the ocean. But Mauritius formed only eight to 10 million years ago when it slowly rose from under the ocean thanks to plate tectonics and volcanic activity. The zircon found on the island was 3 billion years old, so how did it end up there?

More from us: The Fantastic Underwater Discovery of Heracleion – Egypt’s “Atlantis”

Scientists concluded that the zircon must have come from a much older landmass that sunk into the Indian Ocean – a landmass that was oddly similar to Lemuria. Geologists called this new landmass Mauritia. Sclater’s theory about a race of Lemurians that evolved into modern-day lemurs was proved false long ago, but he was onto something with his landbridge theory, which ultimately turned out to be true!