What 9+ Celebrity Icons Wore When They Met Queen Elizabeth II

It was rare for someone to earn an invitation to meet the late Queen Elizabeth II. Meeting with the Queen was a very formal affair, accompanied by all of the glitz and glamor of royal protocol. These photos show several celebrities who met the British Monarch and, most importantly, what they decided to wear for the occasion. 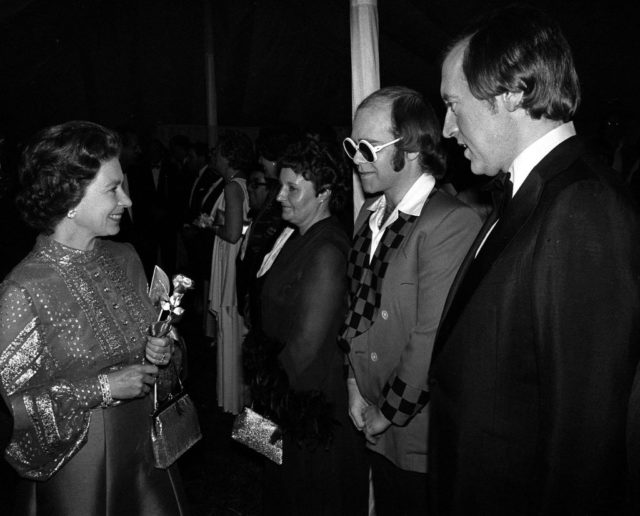 Elton John and David Frost being presented to Queen Elizabeth II at Windsor. They were among a host of stars appearing in a gala variety performance at the Big Top in Home Park, as part of the Silver Jubilee Appeal, 1977. (Photo Credit: PA Images / Getty Images)

Elton John, musical icon of the past and present, had the fortune of meeting Queen Elizabeth II on more than one occasion. One of these times was in 1977, after a variety performance during her Silver Jubilee. John’s outfit was relatively tame, considering the grandiosity of some of the costumes he wears while performing.

John chose a suit with checkers on the lapel and cuffs. Doesn’t the Queen look pleased to see him?

Elton and Queen Elizabeth II in 2012 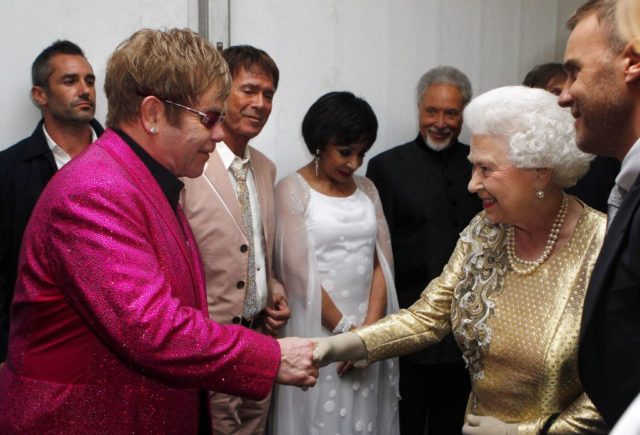 At another meeting between Elton John and Queen Elizabeth II in 2012, he chose something far more extravagant. This time, he opted for a suit jacket made entirely out of sparkly pink material. They certainly made for a shining pair, as the Queen wore a golden gown for the event.

Their later meeting was prompted by John performing at the Diamond Jubilee. During both of these meetings with Queen Elizabeth II, he kept on his famous glasses, although his choice of spectacles in 1977 was significantly bolder than during their later meeting. 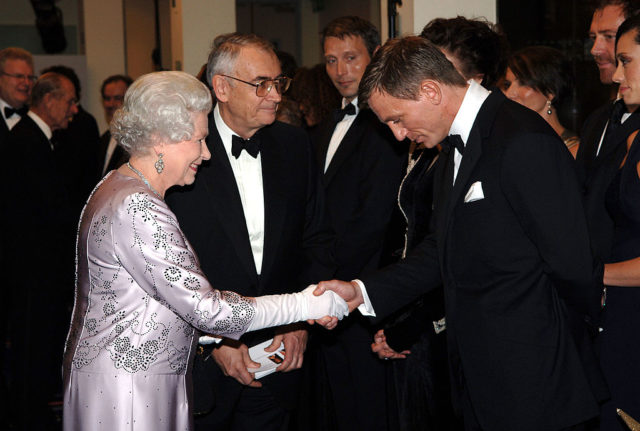 Daniel Craig, known for starring in the James Bond franchise, met Queen Elizabeth II at a showing of Casino Royale in 2006. Unlike Elton John, Craig went with a much more traditional clothing option for this meeting, donning a black tuxedo.

The 007 star met the Queen again in preparation for the London 2012 Olympics, although this time their interaction was much less formal. They prepared a stunt for the opening ceremonies, which involved “the Queen” jumping out of a helicopter to make her grand entrance. According to Craig, this was when she made a joke at his expense. 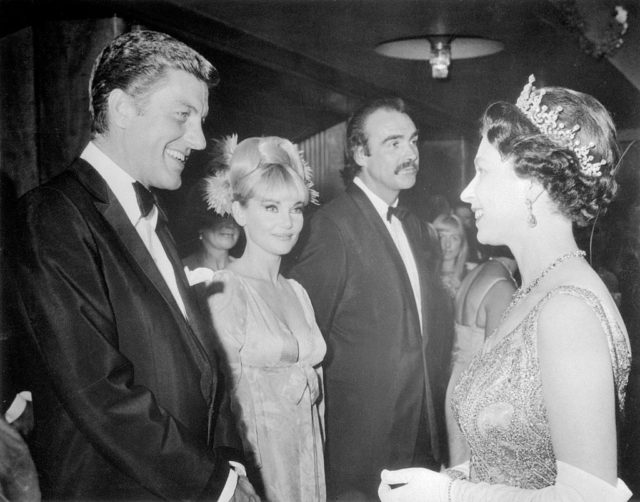 Daniel Craig wasn’t the only James Bond to meet Queen Elizabeth II. In fact, he wasn’t even the first! Sean Connery met her at the London premiere of You Only Live Twice in 1967. Alongside Connery was Dick Van Dyke, famous for movies like Mary Poppins (1964) and Chitty Chitty Bang Bang (1968). He also attended the premiere.

Both men wore traditional suits with black bow ties, while the Queen wore a sparkling ensemble topped off, of course, by a tiara. 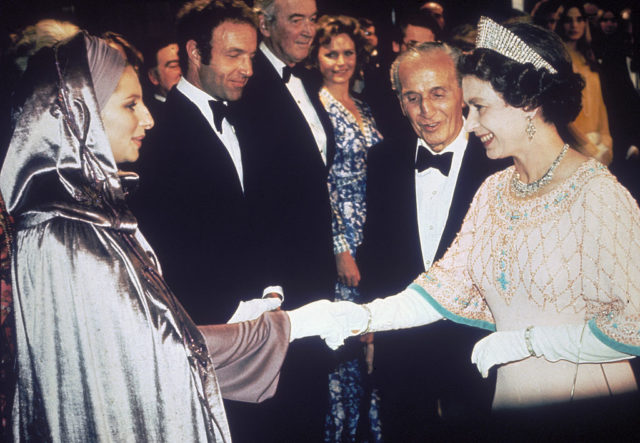 Actress and singer Barbra Streisand met Queen Elizabeth II at the Royal Film Performance of Funny Lady on March 17, 1975. She chose an extremely unique look, wearing a lavender cape designed by Ray Aghayan. Aghayan also designed the looks that appear in the film.

Along with the cape, she wore a matching turban, as well as a long gown and white gloves, much like those donned by the Queen herself. After the British Monarch initiated a conversation with her, Streisand asked a pressing fashion question, “Your Majesty, why is it that women wear white gloves to meet you and men don’t?”

The Queen’s response? “I’ll have to think about that one. I suppose it’s tradition.”

Paul McCartney and The Beatles 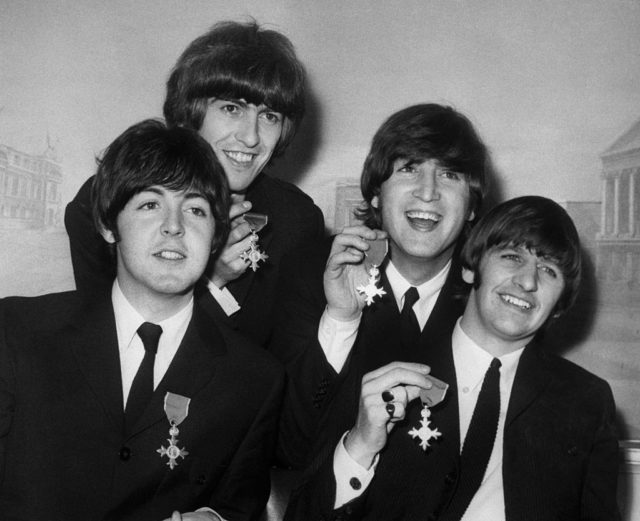 The Beatles display the medals they were awarded when Queen Elizabeth II granted them membership in the Most Excellent Order of the British Empire at Buckingham Palace. (Photo Credit: Bettmann / Getty Images)

The Beatles met Queen Elizabeth II a number of times throughout their career. They were one of the featured acts at the Royal Variety Performance in 1963, where John Lennon boldly told the Queen and the other dignitaries in the audience to “rattle their jewelry,” instead of clapping.

Their second meeting was far more important, however, as the group was awarded the Most Excellent Order of the British Empire. The four clearly coordinated their outfits, opting for black suits, slender ties and Chelsea boots.

Singer Paul McCartney would go on to meet Queen Elizabeth II many more times throughout her life, each time wearing some iteration of a black suit. His boldness never dissipated from their initial 1963 meeting, saying to the her at his Companion of Honour ceremony in 2018, “We have got to stop meeting like this.” 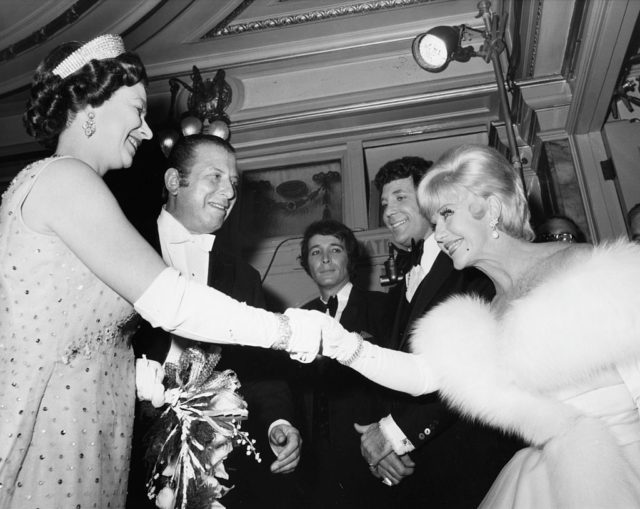 Ginger Rogers met Queen Elizabeth II in 1969 while wearing a truly glamorous ensemble. She decided to make the appearance in a white dress lined with fur, as well as white gloves to match. They met at the Royal Variety Performance in London. At the time, Rogers was well-known for her time dancing alongside Fred Astaire in 10 different films. 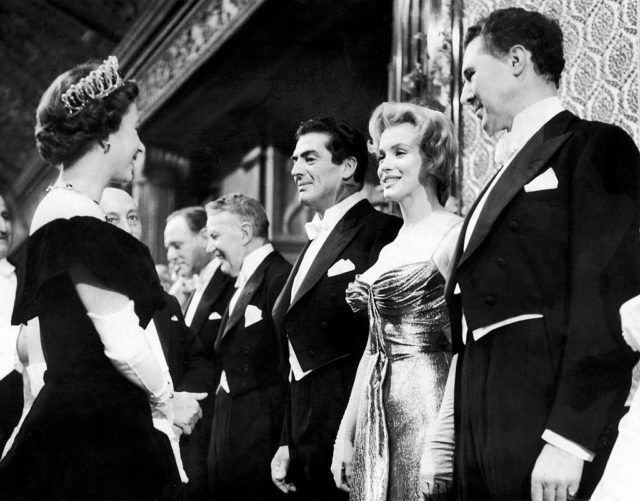 By 1953, Marilyn Monroe had become one of the most famous stars in Hollywood. Three years later, while filming The Prince and the Showgirl in the United Kingdom, she had the opportunity to meet Queen Elizabeth II. Apparently, Monroe had wanted to meet her from the moment she arrived in England and had dreamt of having tea with the British Monarch.

Monroe’s wish came true, minus the tea, when she was invited to attend the Royal Command Performance in London. Both women wore elegant dresses with the customary white gloves, and were equally thrilled to meet each other, with Monroe talking to reporters about it at the end of the night. The Queen called the Hollywood starlet “a very sweet person.” 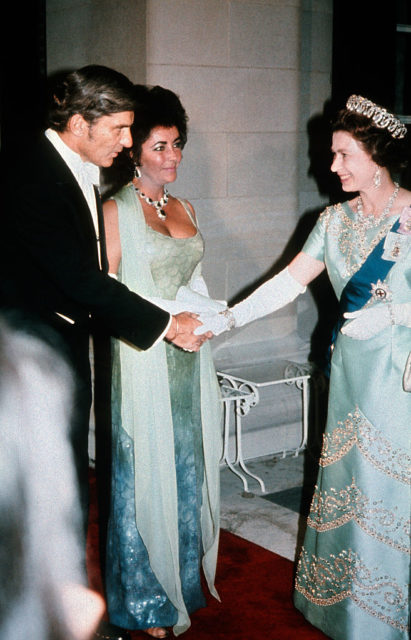 When Elizabeth Taylor met Queen Elizabeth II in 1976, it was unknowingly the start of the relationship with one of her eight husbands, John Warner. Warner was asked to escort Taylor to in Washington, DC, where an embassy party was being held in honor of the Queen’s visit. The pair got married later that same year.

As for what Taylor chose to wear, she settled on a turquoise down with a long shawl, in nearly the same color as Queen Elizabeth II’s dress. This wasn’t the last time that she would meet the Royal, either, as she was eventually made a dame in 2000. 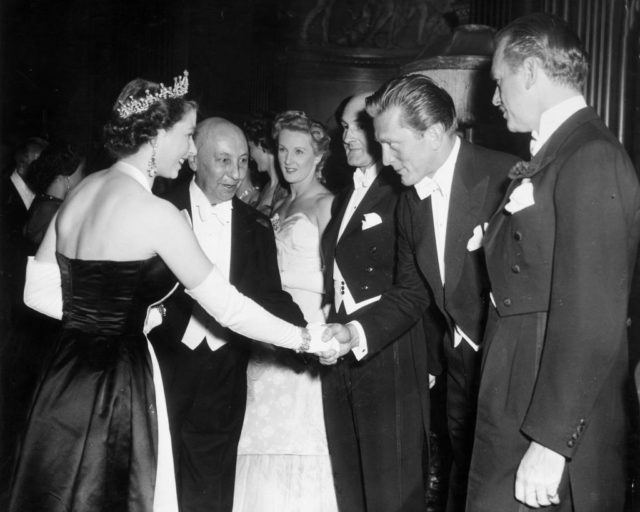 Kirk Douglas bows and shakes hands with Queen Elizabeth II, as Douglas Fairbanks Jr. looks on, at the Royal Command premiere of the film Because You’re Mine in London, England, 1952. (Photo Credit: Hulton Archive / Getty Images)

Kirk Douglas was known for acting in many popular Western and action films. As such, he’s regarded as an icon of old Hollywood.

He met Queen Elizabeth II in 1952, following the Royal Command premiere of the film Because You’re Mine. Ironically, he hadn’t actually had a role in the movie – he’d attended the premiere anyway. He decided to go with a classic black tuxedo for his meeting with the Queen, which was evidently a success. 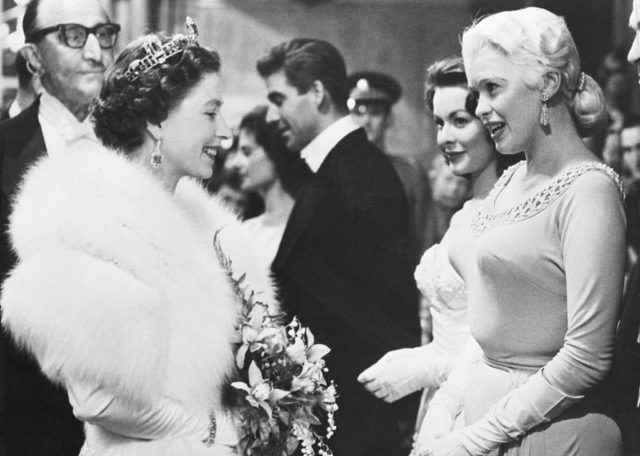 American actress Jayne Mansfield met Queen Elizabeth II in 1957 during the Royal Command Film performance. The two were photographed chatting in the reception line, with Mansfield in London to promote her film, Will Success Spoil Rock Hunter?.

Mansfield wore a demure style for the event, including gloves, although she still turned plenty of heads. The Queen wore a lavish fur wrap, a sparkling tiara and held a large bouquet of flowers. 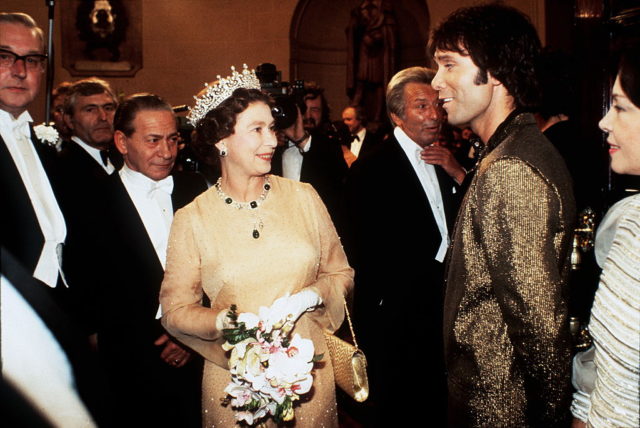 As with many celebrities, Cliff Richard met Queen Elizabeth II on more than one occasion. One of their earliest was following his performance at the Royal Variety Show in 1981. The British Monarch appeared quite shocked at his choice of outfit, perhaps because most men who met her opted to wear a black suit. Instead, Richard wore a sparkling gold suit jacket, which certainly stood out in the crowd.

The Queen clearly decided to return the favor in one of their subsequent meetings, during which she wore a golden gown almost as gilded as Richard’s jacket had been. They met many times afterward, most notably when he was knighted in 1995. 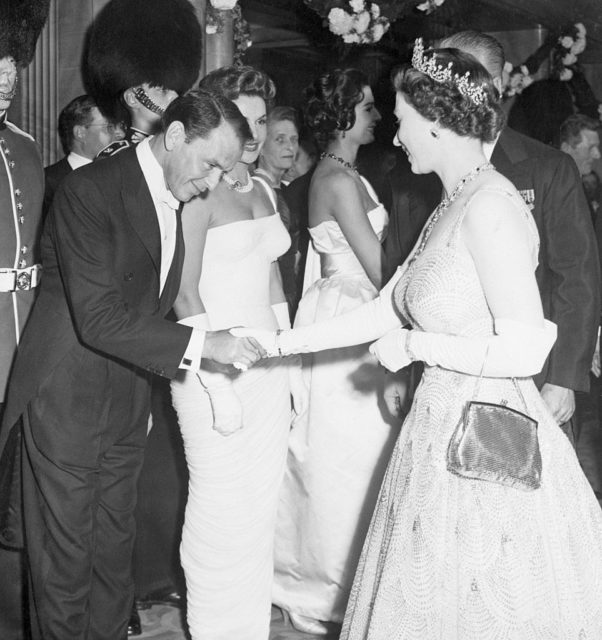 Frank Sinatra bows as he’s presented to Queen Elizabeth II at the movie premiere of Me and the Colonel. (Photo Credit: Bettmann / Getty Images)

Frank Sinatra, like many of the male celebrities who met the Queen, opted for a suit with tails and a crisp white shirt. He met the Royal at the 1958 premiere of Me and the Colonel. The crooner met the Queen again in 1983.

Sinatra and Queen Elizabeth II in 1983 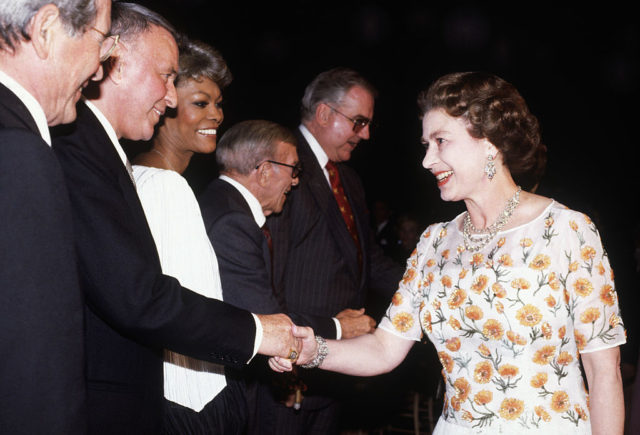 Queen Elizabeth II meeting Frank Sinatra at the studios of 20th Century Fox after a dinner given in her honor by the City of Los Angeles during her Royal Tour of the United States, 1983. (Photo Credit: David Levenson / Getty Images)

The pair’s meet up in 1983 was during an event hosted by 20th Century Fox. Queen Elizabeth II was visiting the United States during her Royal Tour and had attended a dinner earlier in the evening. While Sinatra’s outfit of choice remained largely the same for this visit, the British Monarch went for something much less formal. She wore a simple white dress with yellow flowers.

« Lemuria: The Mythical Lost Continent That (Almost) Turned Out to Be Real
Sylvester Stallone Had to Make a Devastating Choice Before Starring in ‘Rocky’ »