There is a mythology that surrounds Jayne Mansfield’s life and death. Did she have an IQ over 160 and the ability to speak five languages? Or was Mansfield an addict who was simply a “cheaper” version of Marilyn Monroe? Even her death is shrouded in mystery. For years, rumors circulated that Mansfield had been decapitated in the terrible car accident that killed her. Here, we try and tackle one of the strangest periods of Jayne Mansfield’s life – her connection to Anton LaVey and the Church of Satan. 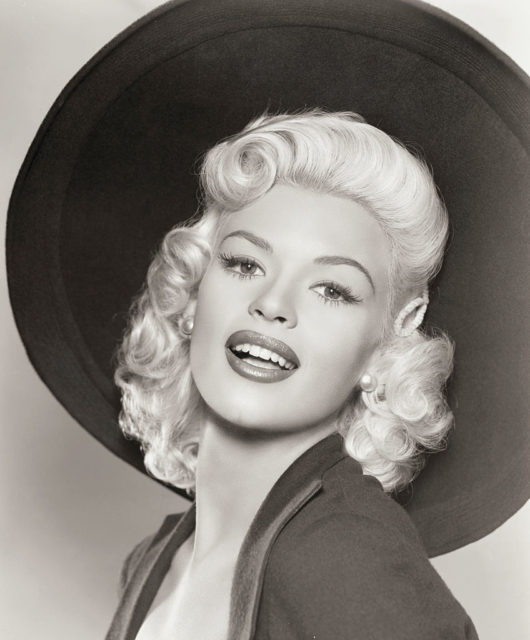 Born Vera Jayne Palmer, Mansfield was born on April 19, 1933, in Bryn Mawr, Pennsylvania. When she was 17 years old, she married Paul Mansfield. Six months later, their first daughter was born.

Jayne Mansfield arrived in Hollywood when she was 21. Initially, she struggled to find roles, but she was never one to back down from a challenge. Mansfield wasn’t afraid to use her assets to her benefit and became one of Hugh Hefner’s earliest Playboy bunnies. She was named Playboy of the Month in February 1955.

Mansfield utilized her initial pinup success, marketing herself as Hollywood’s newest blonde bombshell. She appeared in minor roles and as Rita Marlowe in the Broadway play Will Success Spoil Rock Hunter? In 1956, Mansfield signed a six-year contract with 20th Century Fox. That same year, she scored her first starring role in The Girl Can’t Help It. In 1957, Mansfield won a Golden Globe for New Star of the Year. 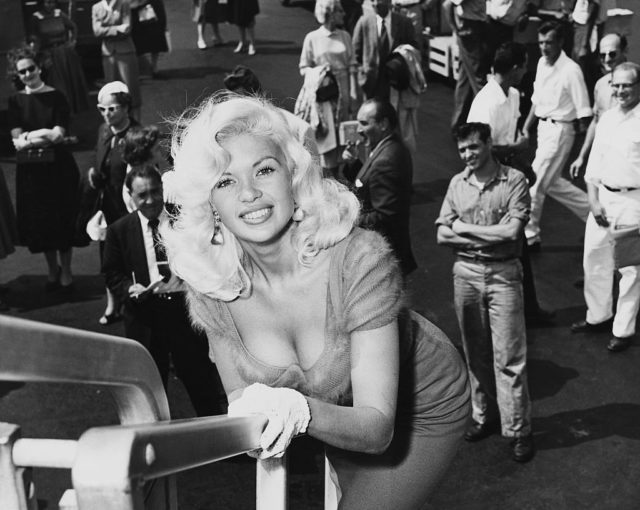 Jayne Mansfield leaning on a railing with a crowd of spectators behind her. Undated photograph. (Photo Credit: John Springer Collection/ Getty Images)

Mansfield’s Hollywood career was in decline by the early 1960s. By 1962, 20th Century Fox had dropped her contract. Jayne Mansfield would take roles in B-movies and low-budget films for the rest of her life.

She would do anything for publicity 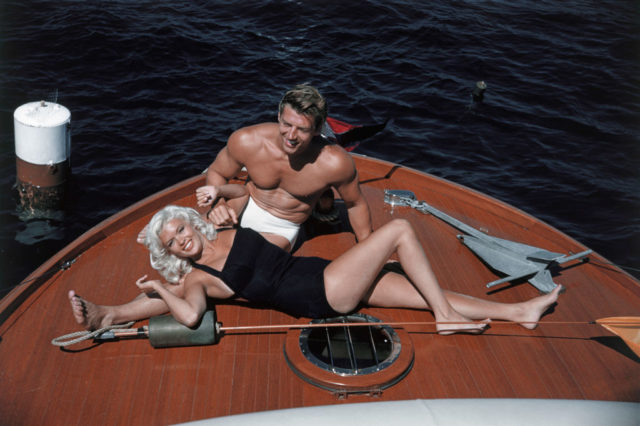 Jayne Mansfield poses for a photo with husband Mickey Hargitay on their way to Catalina on July 22, 1957 between Los Angeles and Catalina, California. (Photo Credit: Donaldson Collection/ Getty Images)

Jayne Mansfield continues to be one of the best-known celebrities of the 1950s and 1960s, despite the fact that many newer fans have never seen her films. This is because she was constantly doing things to gain attention in the international press.

Mansfield was known for her voluptuous figure. She would not only expose her breasts in the movies she acted in, but also to photographers on the street. She was also known for her love of the color pink. Her Los Angeles home was famously known as the “Pink Palace,” which had a floor-to-ceiling shag rug and a heart-shaped swimming pool in the backyard. 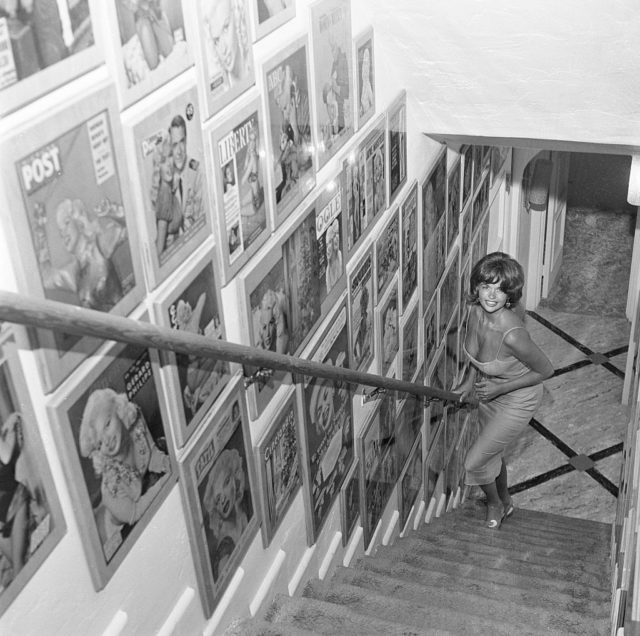 Jayne Mansfield at home with a wall full of framed magazine covers she appeared on, circa 1961. (Photo Credit: Bettmann/ Getty Images)

Jayne Mansfield also gained attention when she began hanging out with Church of Satan founder Anton LaVey. In 1963, Mansfield considered converting to Catholicism. Although she never officially converted, she attended Catholic services and followed Catholic practices when she was married to Mickey Hargitay.

Mansfield first met LaVey in 1966. She was invited to visit San Fransisco’s Church of Satan during the San Fransisco Film Festival. This press immediately got wind of this meeting and dubbed Mansfield “The High Priestess of LaVey.” Allegedly, Anton LaVey made Jayne Mansfield a high priestess of his church.

Was Mansfield a practicing Satanist? Truthfully, no one really knows. What is clear is that LaVey and Mansfield used each other for publicity. The pair were photographed together on numerous occasions. Their friendship might have been a publicity stunt, but Mansfield stuck up for LaVey and regarded him as “a genius” and “an interesting person.” 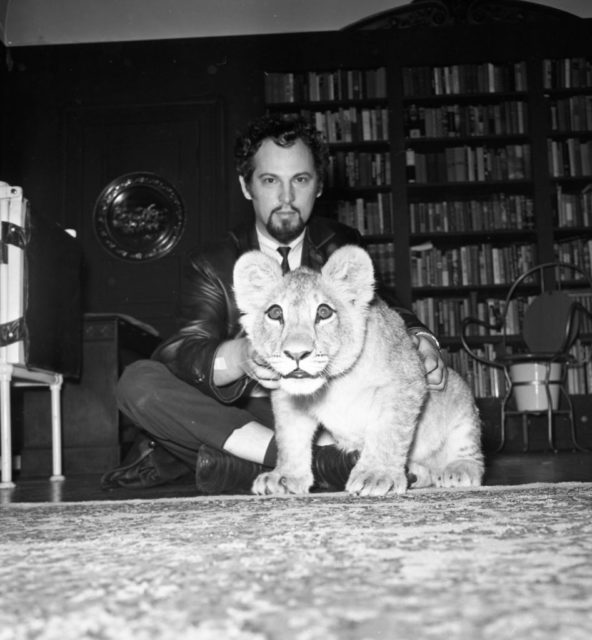 Anton LaVey, founder and self-proclaimed high priest of the Church of Satan, is photographed at home in San Francisco with his pet lion on June 26, 1964. (Photo Credit: The San Francisco Chronicle/ Hearst Newspapers via Getty Images)

Of course, when Mansfield and LaVey became friends, Mansfield was already dealing with a lot in her personal life and arguably didn’t need any more bad press. By 1966, Mansfield was romantically involved with her divorce lawyer, Sam Brody. It seems that Anton LaVey and Sam Brody butted heads. Allegedly, LaVey hexed Brody and warned Mansfield that he would die in a car crash.

Strangely enough, Jayne Mansfield faced a series of unfortunate events after LaVey supposedly put a curse on Sam Brody. Her six-year-old son was mauled by a lion and had to have brain surgery. Mansfield was also involved in six car crashes leading up to a seventh fatal car crash in June 1967.

More from us: Jayne Mansfield’s Death: The Car Crash That Changed Federal Laws

In the early morning hours of June 29, 1967, Jayne Mansfield was traveling from Biloxi, Mississippi to New Orleans when she was tragically killed, alongside Sam Brody and driver Ronald B. Harrison. Although Mansfield was only 34 when she died, history has remembered her and all the larger-than-life stories she amassed during her time on earth.

« Invaluable Artifacts That Went Down With the Titanic
Did This Murder-Suicide Lead to the Assassination of Franz Ferdinand and the Start of WWI? »