How British Royals Have Celebrated Their Jubilees Throughout History

Royal jubilees have been around for centuries. The term originated in Biblical times, and the British Royal Family has fully embraced hosting celebrations to mark monarchs reigning for 25, 50, 60 and 70 years. Not until Queen Elizabeth II did a monarch celebrate their platinum jubilee, and only a handful have marked their golden ones.

George was loved by the public, and his subjects fully embraced the spirit of the celebrations. Children born on this day were even christened “Jubilee George” or “Jubilee Charlotte,” in honor of George and his wife, Charlotte of Mecklenburg-Strelitz. 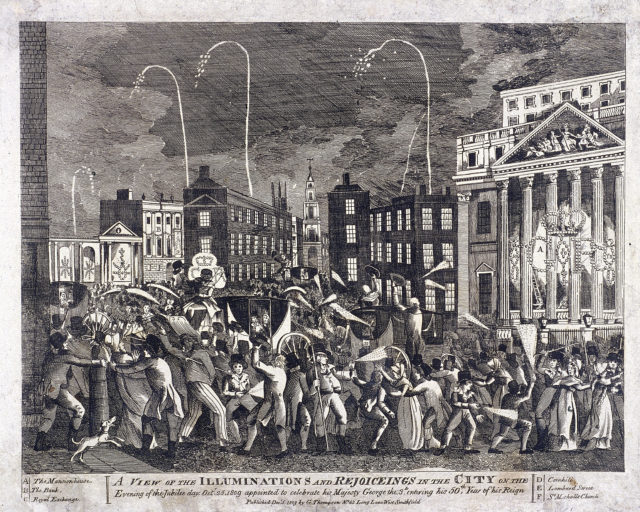 In an act of kindness and merriment, George also pardoned all military deserters and prisoners of war, and a statue was later erected at Weymouth in his honor. 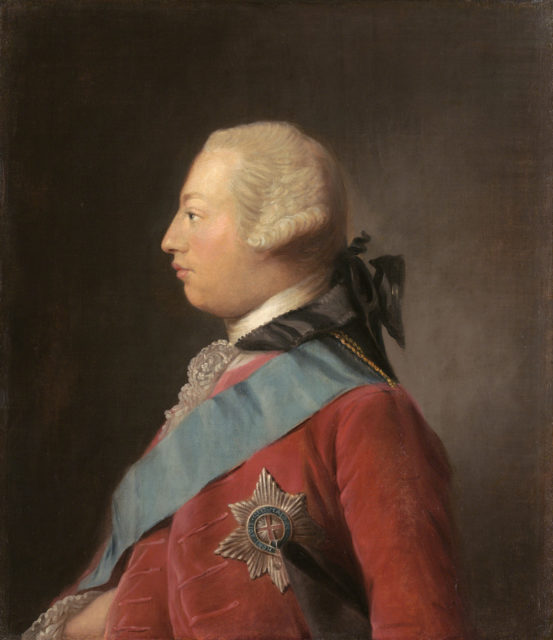 Unfortunately, George suffered mental instability later in life, which over the years became more serious. On October 25, 1810, he made his last public appearance, and it was not long until parliament passed the Regency Act 1811, which conferred his authority onto his eldest son and heir.

Granddaughter to George III, Queen Victoria ascended to the throne in 1837 and celebrated her golden jubilee 50 years later. After her husband’s passing in 1861, Victoria pretty much removed herself from the public eye, which made her participation in the celebrations a little more muted when compared to others. She actually had to be convinced to participate, as she continued to mourn Albert’s death. 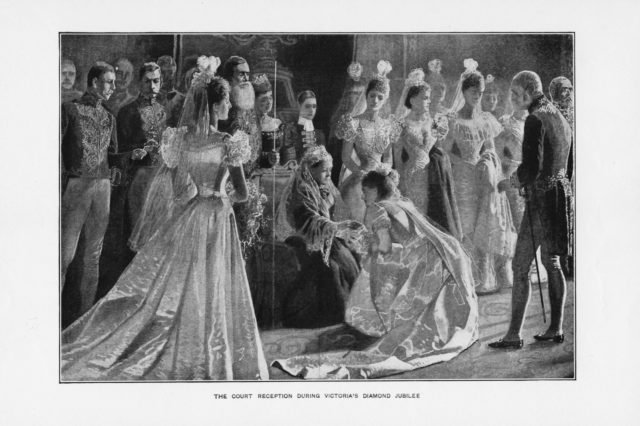 On June 20, 1887, to kick off the celebrations, Victoria enjoyed breakfast at Frogmore, near where her husband was buried. From there, she traveled by train to London to attend a large family dinner at Buckingham Palace. She recorded how much she enjoyed her meal, saying, “We dined in the Supper Room, which looked splendid with the Buffet covered with the gold plate.”

The next day, a thanksgiving service was held at Westminster Abbey, but Victoria refused to wear her crown and robes of state and, instead, substituted them for a diamond-laced bonnet. Additionally, she chose to travel in a simple landau carriage.

The rest of the festivities followed suit, in terms of simplicity – and good thing, too, as the economic hardships of the day would have brought widespread resentment. The general pageantry of the event was simple in presentation, and it was the number of people who flocked to the streets that made the celebrations impressive. 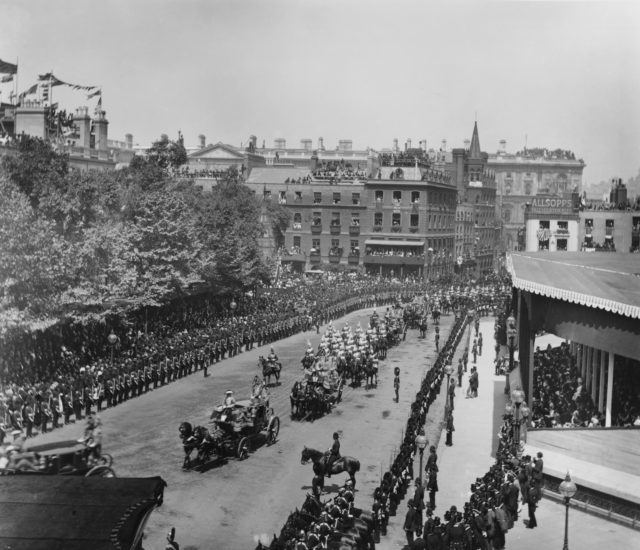 Ten years later, Queen Victoria celebrated her diamond jubilee. She was transported along a six-mile procession through London, where crowds of people watched her pass. The procession was actually broadcast to cinema audiences across the world, as 40 newly-developed camera operators were stationed along the route.

Due to her age and rheumatism, Victoria was unable to leave the carriage to climb the steps of St. Paul’s Cathedral at the end of the procession. Instead, her carriage was open-topped, so she could take part in the service while seated.

King George V was a popular monarch, thanks to his eagerness to respond to his subjects’ desires. He inherited the throne during a politically turbulent time and became an important figurehead of World War I. His early leadership and guidance earned him deep affection from his subjects and this admiration was clearly evident during the celebrations for his silver jubilee. 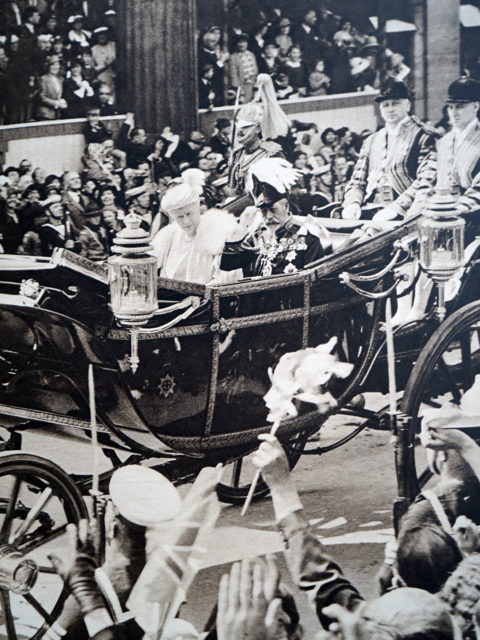 Celebrations began on May 6, 1935 with a procession through London to St. Paul’s Cathedral, where George and his family attended a thanksgiving service. On the way, he mentioned how it was “the greatest number of people in the streets that I have never seen in my life… The enthusiasm was indeed most touching.”

His subjects put on their own celebrations, including garden parties, pageants and sports events. As well, children born on this day were gifted a commemorative silver cup, in honor of the monarch’s achievement.

Queen Elizabeth II has hit every notable milestone during her reign, so we’ll focus on her most recent jubilee celebrations. Her diamond jubilee began with the Thames Diamond Jubilee Pageant on June 3, 2012. It featured a maritime flotilla of approximately 1,000 boats, led by the Gloriana, the Queen’s Royal Barge, which traveled from Chelsea to Tower Bridge.

The next day, there was a concert held outside Buckingham Palace to round out the celebrations. 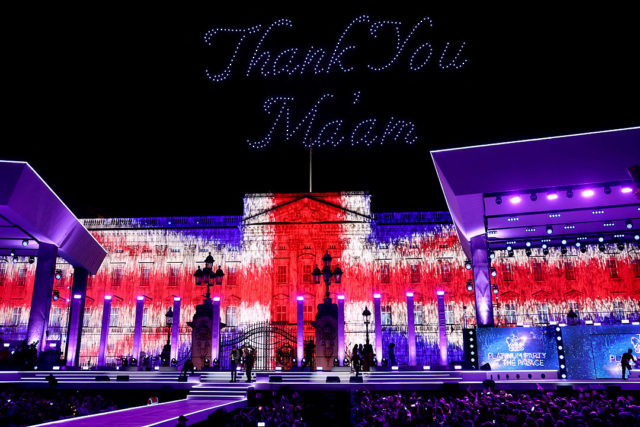 Spectators at Queen Elizabeth II’s platinum jubilee celebration in London were treated to a display of 400 drones used to create images in the sky, including a corgi, a stamp and a cup of tea. (Photo Credit: Amr Vignesh / Wikimedia Commons CC BY-SA 4.0)

Elizabeth made history in 2022 as the first monarch to celebrate 70 years of reign. In June, the celebrations for the first platinum jubilee were held, beginning with a thanksgiving service at St. Paul’s Cathedral, followed by the derby at Epsom Downs. Along with the Platinum Jubilee Pageant, the celebrations included a star-studded concert and the Platinum Jubilee Corgi Derby.

The public joined in on the celebrations as well, hosting and attending “Big Jubilee Lunches,” with over 10 million participating in celebrations on the streets and in homes and gardens.

« Did You Know the Supreme Court Has Its Own Basketball Court?
Ballroom Blitz: Meet the Burlesque Dancers Who Boosted British Morale During WWII »