Following the death of Queen Elizabeth II, plans were put in motion for her funeral, burial and a period of public mourning. They also included details about the type of coffin she’d be buried in. One specification was that it had to be lined with lead, something that is part of a historic Royal tradition dating back at least as far as the reign of Queen Elizabeth I.

The coffin was prepared 30 years in advance 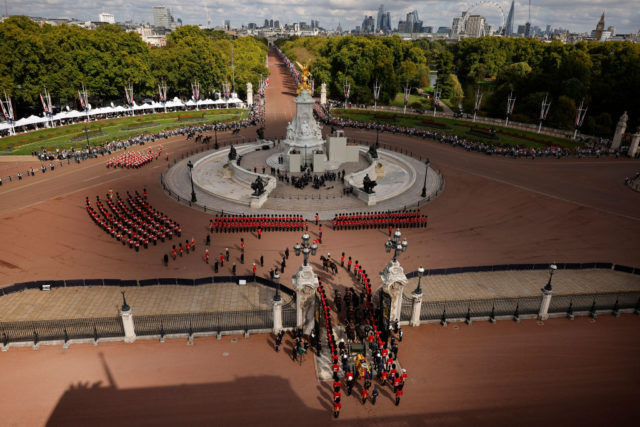 The preparations for Queen Elizabeth II’s death were extensive. So much, in fact, that her coffin had been prepared for over 30 years. It’s a mystery who made it, however, as it was inherited in 1991, when the role of the Royal Family‘s undertaker was passed on to Leverton & Sons. Having inspected the coffin years ago, Andrew Leverton believes it was made at the same time Prince Philip‘s was.

Part of the reason the coffin was made so far in advance of the Queen’s death is that the specifications are very particular. The lid has brass fittings that allow for various important objects, such as the Imperial State Crown, Orb and Scepter, to be attached to the top, so they don’t fall off. It’s also constructed from English oak, a very expensive and rare wood to use for modern coffins.

A coffin lined with lead 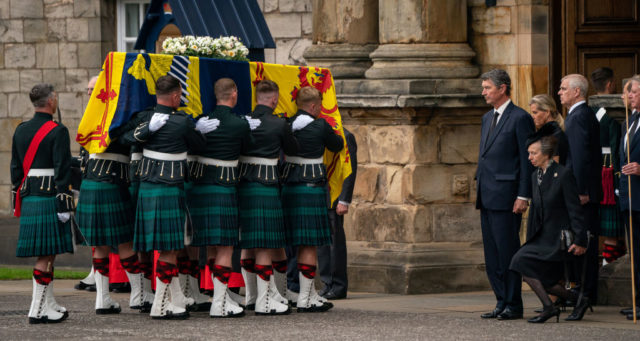 Queen Elizabeth II’s coffin being lined with lead is not unusual. In fact, it’s a Royal tradition that’s centuries old. It’s done out of practicality, as a casket lined with lead will slow down the decomposition process by sealing out moisture, thus preserving the a body for up to a year – much longer than traditional coffins.

This is important to the Royal Family for many reasons. First, it stops any odor from escaping, which is vital when there are many days of public mourning in place before the burial. Second, the Queen’s burial took place in an above-ground tomb. In order to do this, the coffin must be completely sealed.

Understandably, the lining also makes the casket very heavy, which is why it was carried by eight military bearers.

The Royal Family added hidden meaning to the coffin 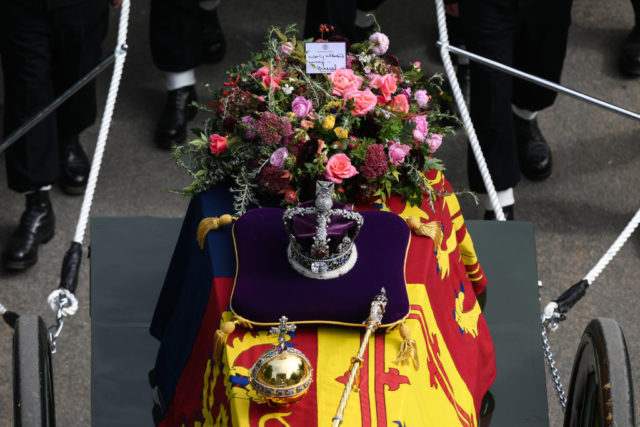 A note from King Charles III is seen with flowers on the coffin of Queen Elizabeth II, draped in the Royal Standard, on the State Gun Carriage of the Royal Navy at Wellington Arch, after the State Funeral at Westminster Abbey, September 19, 2022. (Photo Credit: Daniel Leal / WPA Pool / Getty Images)

The coffin is not only made up of oak and lead. The items placed on top also hold significance to Queen Elizabeth II’s legacy. At her funeral, which was held on September 19, 2022 at Westminster Abbey, the casket was draped in the Royal Standard, which represents both the sovereign and the United Kingdom.

On top of the coffin and flag lay the Royal Imperial Crown, encrusted with nearly 3,000 diamonds and an array of other precious gemstones. As aforementioned, the Sovereign’s Scepter and Orb were also placed on top, alongside a touching and meaningful wreath of flowers.

The flowers were cut from the gardens of Buckingham Palace and Clarence House. A small note was placed in the arrangement, which read, “In loving and devoted memory,” signed by the Queen’s eldest son and successor, “Charles R” – or King Charles III.

Leaving handwritten cards is a newer tradition in the Royal Family, beginning with the heartbreaking note penned by then-12-year-old Prince Harry in 1997. Simply reading “Mummy,” it was placed on top of Princess Diana‘s casket at her funeral. The Queen also penned a touching note left on the coffin of her late husband, Prince Philip, which read, “In loving memory, Lilibet” – the name Philip often used for his wife. 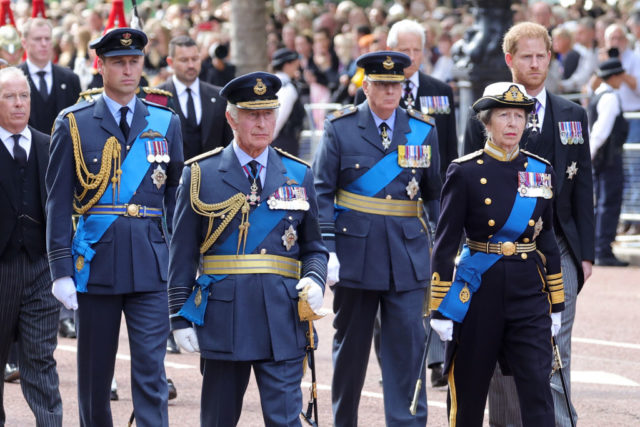 More from us: The History of Balmoral Castle, Scottish Home of the British Royal Family

Prince Philip’s coffin was moved to the King George VI Memorial Chapel in St George’s Chapel at Windsor Castle, where Queen Elizabeth II was buried. He was previously located in the Royal Vault, but has now been laid to rest with other members of Elizabeth’s family, such as Elizabeth the Queen Mother, Princess Margaret and King George VI.

« Who Wrote the Constitution? All Your Questions Answered
Michael Keaton Took A Hiatus From Hollywood, and Years Later Candidly Explained Why »