Who Wrote the Constitution? All Your Questions Answered

The American Constitution is arguably one of the most important documents ever created in the world, as it outlines the laws and form of governance in the United States and, subsequently, influenced similar documents in other countries. The document has grown and changed along with the county, with 27 amendments being made out of a proposed 33 since 1789. Only one of these has been repealed, the amendment creating Prohibition.

This document with such a long-lasting legacy has led many to wonder: who wrote the Constitution? Read on for the answer to this seemingly simple question that has a much more complicated answer.

Why create the Constitution?

The separation of Britain and what would become the United States occurred during the American Revolutionary War or the War of Independence, depending on who you ask. Fighting between the two countries began in 1775, but the Declaration of Independence, the document officially announcing the 13 colonies’ separation from Great Britain, wasn’t created until July 4, 1776. 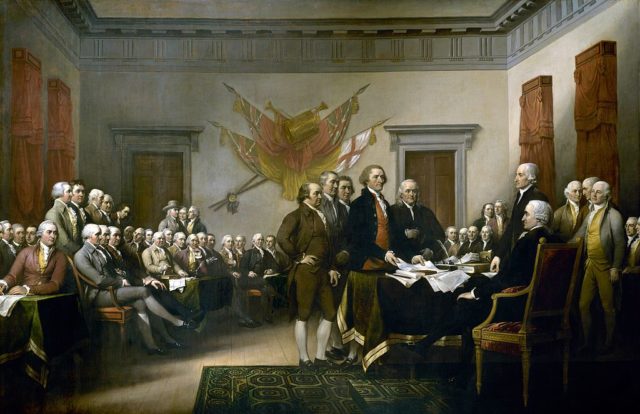 Although the document was created in the middle of the 1770s, the fighting between the two countries continued into 1783 when an official peace treaty was signed. During the war, the earliest constitution was created, called the Articles of Confederation and Perpetual Union, and ratified in 1781. Working under the confines of this document, the Confederation Congress quickly realized that it had many limitations, primarily surrounding money and troops. They called a convention in 1787 to draft a better version.

The Constitutional Convention, as it was called, saw the gathering of 55 delegates from the various states in Philadelphia on May 25, 1787. Only delegates from Rhode Island weren’t in attendance. A renowned hero of the war, George Washington, was elected to preside over the convention. The delegate’s discussions went on for a lengthy three months which ultimately led to the creation of a newly agreed upon federal system. 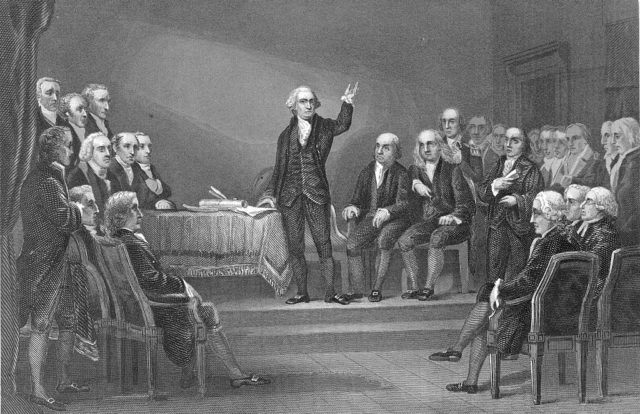 There were many topics discussed throughout the convention, one of which was the issue of how each state would be represented in the new Congress. Large states wanted a proportional legislature, and small states wanted equal representation. The solution was to use one form of representation in the House of Representatives, and the other in the Senate.

Who is the father of the Constitution?

James Madison represented Virginia at the Constitutional Convention, where he proposed what he called the “Virginia Plan.” It outlined a government composed of legislative, executive, and judicial branches. It also proposed that the legislature be composed of the Senate and the House of Representatives. It was these checks and balances that he hoped would help prevent one party from taking advantage of the system. 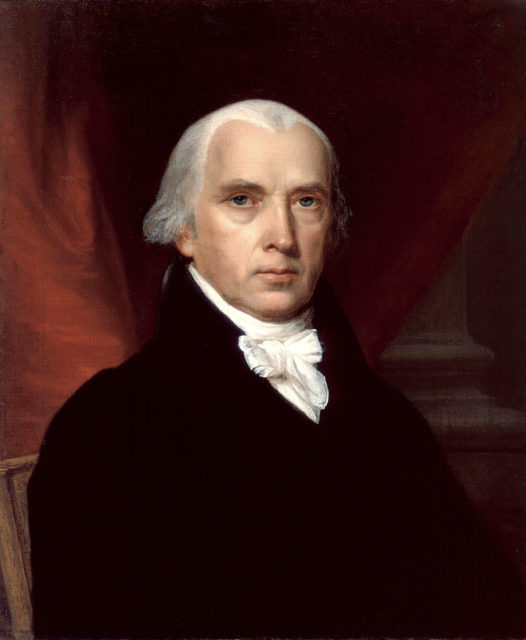 Oil painting of James Madison, the “Father of the Constitution,” by an unknown artist, 1816. (Photo Credit: GraphicaArtis/ Getty Images)

The real story of Hamilton’s involvement

Many of the colonies didn’t want to sign the document so the trio, Hamilton, Madison, and Jay, wrote a series of letters called The Federalist. Now more commonly known as The Federalist Papers, these were a series of 85 articles and essays collectively written, but published as “Publius,” all with the goal of promoting the Constitution’s ratification. Despite Madison’s nickname, “The Father of the Constitution,” it wasn’t his idea to write the papers. 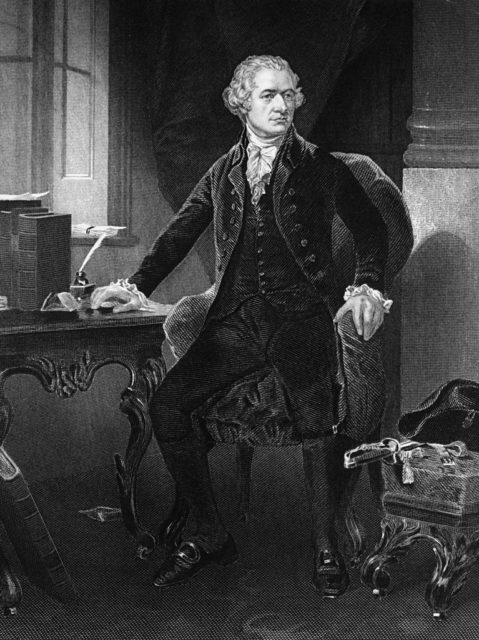 In fact, Hamilton approached Madison and Jay to help him write them as well as supervise the project and the publication. Out of the 85 essays, Madison wrote a respectable 29, Jay only five, and Hamilton the astonishing 51 remaining. The Federalist Papers, largely created by Hamilton’s guidance, along with Madison’s continued work persuading his opponents, helped get the Constitution ratified.

Although Hamilton was a staunch supporter of the Constitution, and his contribution to Constitutional history was getting it ratified, he played a very small role in drafting the actual document. At the Constitutional Convention, he was part of the committees that outlined stylistically how the document would be written and what the rules of the convention would be. There were others, however, who were much more involved.

Other than Madison, there are a few other men who are typically given credit for their involvement in the creation of the Constitution, both at the Convention or from overseas, including Thomas Jefferson, Thomas Paine, and John Adams. Although George Washington was heavily involved in the Constitutional Convention, he wasn’t so directly involved with the document’s creation. 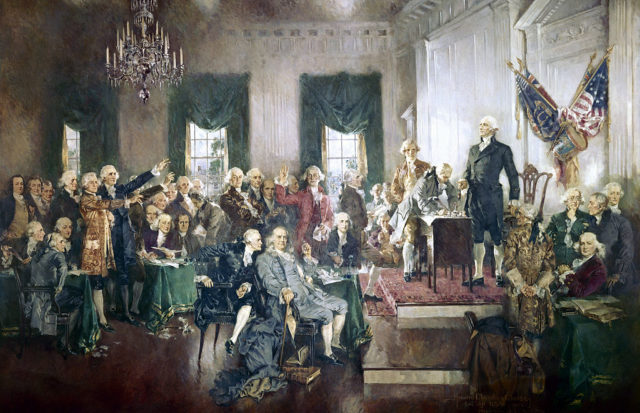 Modern oil painting showing the signing of the US Constitution with George Washington, Benjamin Franklin, and Thomas Jefferson at the Constitutional Convention of 1787, 1940. (Photo Credit: GraphicaArtis/ Getty Images)

While Madison was deeply involved in the Constitutional Convention, proposing his own plan for American governance, he wasn’t the only one. New Jersey representative William Paterson put forward what he called the “New Jersey Plan” which proposed equal representation for the states in the legislature. Neither his nor Madison’s plan were adopted, instead, the delegates agreed on the “Connecticut Compromise.”

This new plan included the forms of representation put forward by both Madison and Paterson. Ultimately, the new Constitution was created in coordination between all of the state delegates who attended the convention. Even the document itself was handwritten by someone other than Madison, as it turns out, an assistant clerk named Jacob Shallus.

The Bill of Rights

Although James Madison didn’t single-handedly create the Constitution, he did create the Bill of Rights, a set of amendments that outlines Americans’ rights as well as limitations on the government’s power. Ironically, he didn’t think that it was something they needed to include in the Constitution, but he quickly changed his mind. During the process of ratification, there were many states that refused to sign the document unless this addition was made. In particular, Massachusetts point-blank refused to ratify without it. 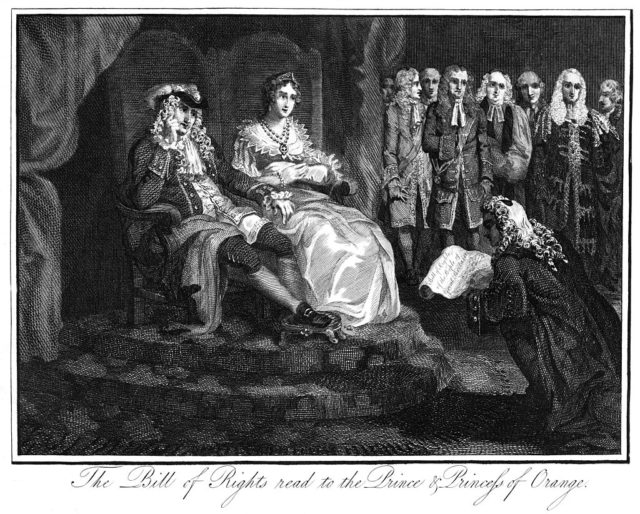 For the Bill of Rights, Madison created numerous amendments to the Constitution in 1789, 17 of which were passed by the House of Representatives, 12 of them were approved by the Senate, and 10 of them were ratified by the various states. These amendments are still a central part of the Constitution today, including those which grant freedom of speech and the right to bear arms.

More from us: Copies Of The Declaration Of Independence Found In Philadelphia And Edinburgh

On December 7, 1787, the first five states ratified the document, followed slowly by the rest. Rhode Island was the final state to ratify it on May 29, 1790. So did James Madison create the Constitution? No, he didn’t do it alone, but he certainly played an important role in the construction of the new government and the ratification of the document.

« He is the Third King Charles. Who Were the Other Two?
Queen Elizabeth’s Coffin Will Be Lined With Lead as Part of a Royal Tradition »