The Beatles are the most influential band in rock and roll. Despite only performing together for a decade, they left a legacy that continues to make an impact. We’re taking a trip down memory lane by looking at the band’s evolution over the years. 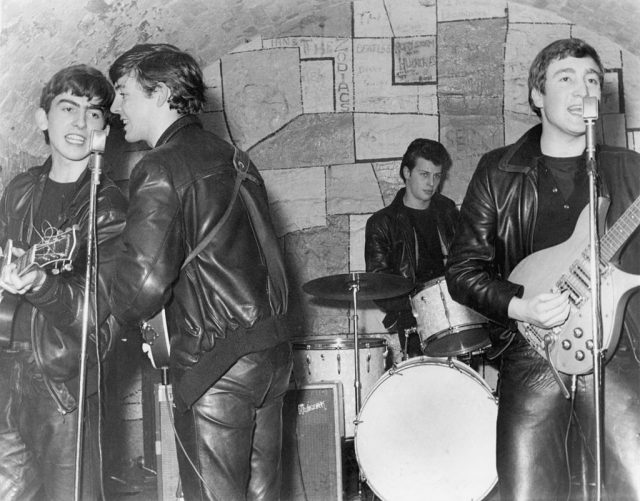 The Beatles got their start at The Cavern Club in Liverpool, and it’s where the band – George Harrison, Paul McCartney, John Lennon and Pete Best – were noticed by their soon-to-be manager, Brian Epstein.

Epstein saw the band perform on November 9, 1961, and recalled, “I was immediately struck by their music, their beat, and their sense of humor on stage – and, even afterwards, when I met them, I was struck again by their personal charm. And it was there that, really, it all started.” 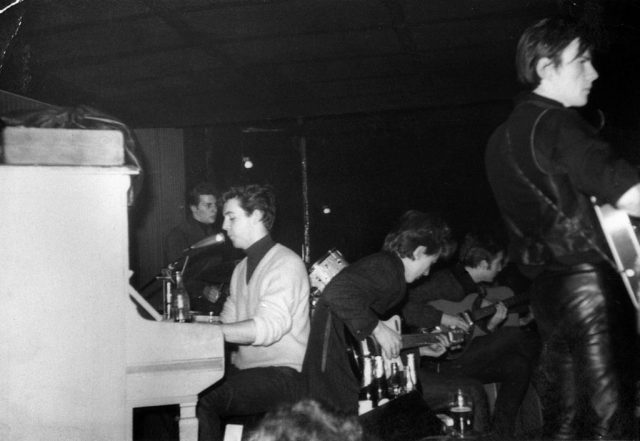 In need of a bassist during their early years, McCartney and Harrison approached Stuart Sutcliffe. Despite not being musically inclined, the duo and Lennon helped teach Sutcliffe basic musical structures. He soon became the “fifth” Beatle and performed during the band’s residencies in Hamburg, Germany.

After leaving the band in July 1961, Sutcliffe began experiencing headaches and a sensitivity to light. His symptoms continued to worsen until, on April 10, 1962, he died of a cerebral hemorrhage. 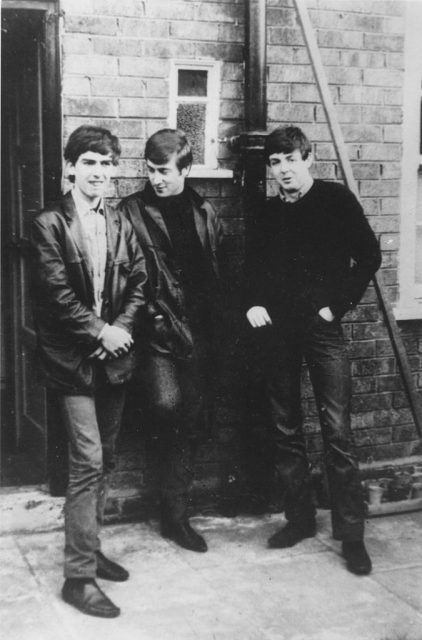 Pete Best was fired from the Beatles in August 1962. Two days later, Ringo Starr played his first show with the band. “We really started to think we needed ‘the greatest drummer in Liverpool,'” recalled McCartney. “And the greatest drummer in our eyes was a guy, Ringo Starr, who had changed his name before any of us, who had a beard and was grown up and was known to have a Zephyr Zodiac.”

The audience’s reception to Starr was cold, as many were angry over Best’s removal. In fact, during Starr’s first performance, Harrison was attacked and given a black eye. Thankfully, the anger died down, and he remained a member of the quartet.

Meeting with the Queen Mother 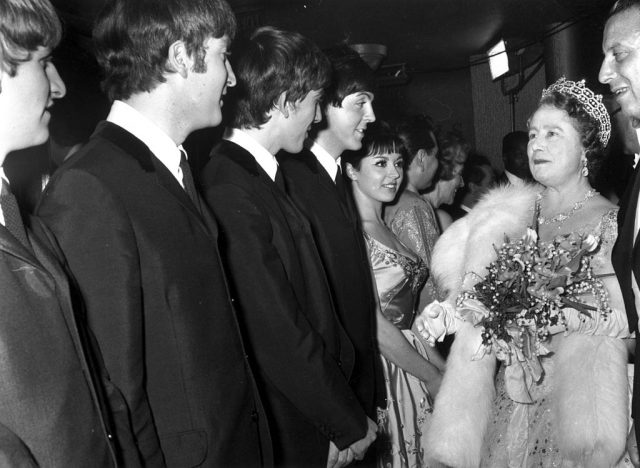 In November 1963, the Beatles were invited to play the annual Royal Variety Performance. While Queen Elizabeth II wasn’t able to attend, the Queen Mother and Princess Margaret enjoyed the show. The band’s appearance caused a buzz. Many suggested they clean up their Liverpool dialect, but they refused – and that wasn’t even the most notable aspect of the performance.

What many fans remember the most about that night is Lennon’s quip about the country’s higher class. “For our last number, I’d like to ask your help,” he said. “The people in the cheaper seats, clap your hands. And the rest of you, if you’d just rattle your jewelry.” Luckily for him, the audience took the joke with jest.

Performing on The Ed Sullivan Show 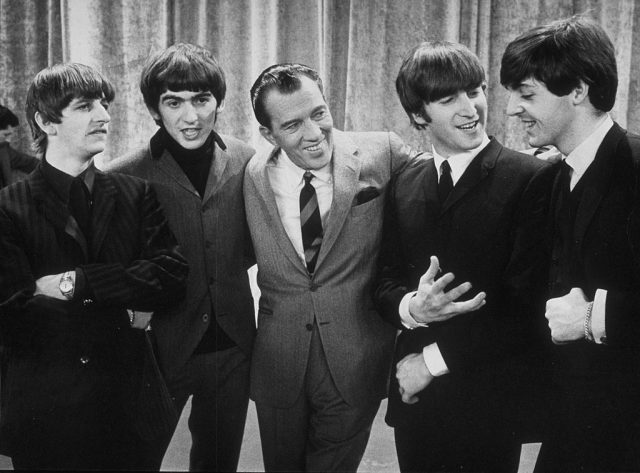 Back in the day, one of the biggest honors a band could receive was being invited to perform on The Ed Sullivan Show. The Beatles’ performance followed their unprecedented success in the US, and the anticipation surrounding it resulted in a record 73 million people tuning in.

Their debut appearance on February 9, 1964, was the first of many. After being formally introduced to Britain’s hottest rock band, American audiences (like everyone else in the world) couldn’t get enough. 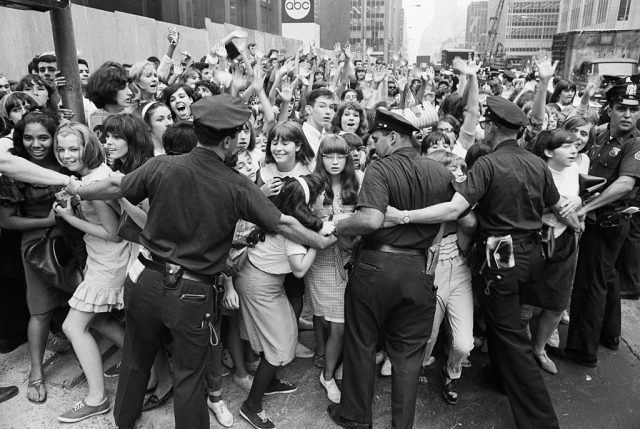 If there’s one word to best describe the 1960s, it’s “Beatlemania” – think of how today’s generation obsessed over Justin Bieber and One Direction. Back then, fans of the Beatles couldn’t get enough of the band’s image or their music, and simply yearned for a chance to meet them in person. We don’t think we can adequately explain how hysterical everyone was – you simply had to be there to experience it.

Their popularity eventually led Lennon to make a particularly controversial remark, which we’ll get into later… 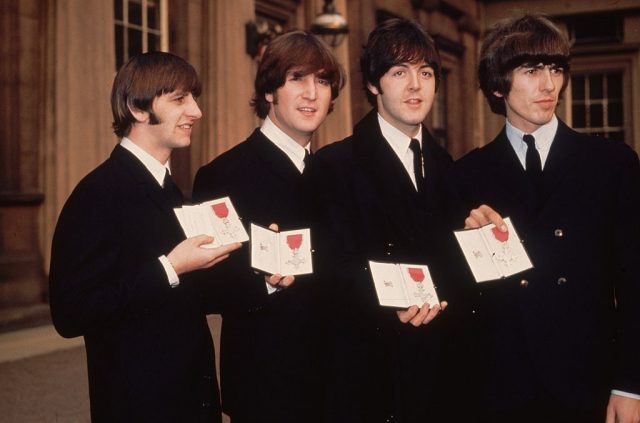 On October 26, 1965, the Beatles were invited to Buckingham Palace to receive their MBE’s – Member of the Most Excellent Order of the British Empire. This was the first time the honor was bestowed upon those within the music industry, as it was typically awarded to veterans.

The honor did not sit well with some of the British public, with Prime Minister Harold Wilson saying, “Decorating the Beatles has made a mockery of everything this country stands for. I’ve heard them sing and play, and I think they’re terrible.” Wilson needn’t have worried, as four years later, Lennon sent back his MBE, citing the country’sÂ involvement in the Nigerian Civil War and the country’s support of America’s involvement in Vietnam. 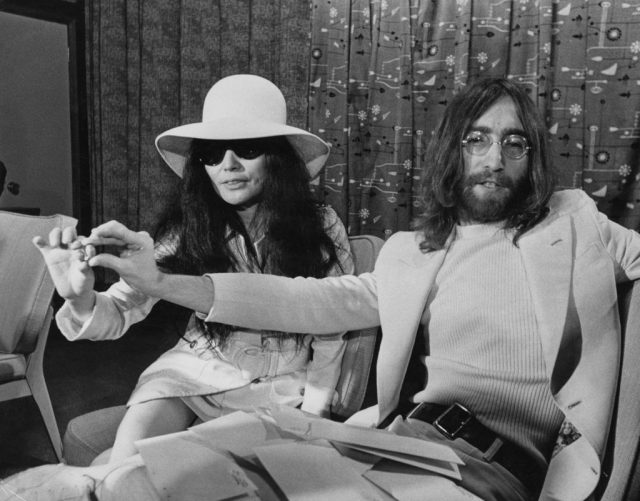 One thing that will start a debate amongst Beatles fans is whether Lennon’s relationship with Yoko Ono led to the band’s breakup. The pair met in 1966 and from then on were inseparable. Lennon brought Ono everywhere, including recording sessions, which was out of the norm for the band’s members.

Their relationship was controversial for a number of reasons. Firstly, both were married at the time they began their relationship. Second, many fans blame Ono for Lennon’s shift toward more experimental music. Pair that with her claims that Lennon was obsessed with her, and you’ve got the reason as to why fans think she’s the straw that broke the camel’s back, so to speak.

The Beatles are “more popular than Jesus” 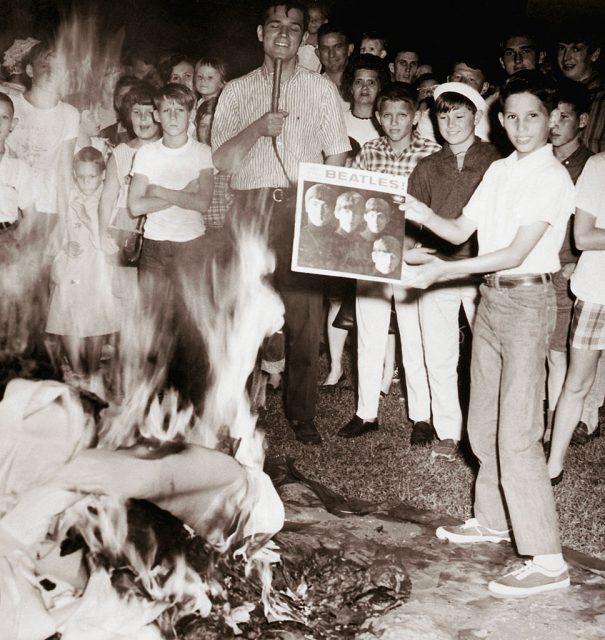 Remember Beatlemania? Well, things took a turn after Lennon said the band was “more popular than Jesus,” and that rock music would outlast Christianity. As the majority of Americans at the time were highly religious, this didn’t go over well. Protests erupted across the country, particularly in the Bible Belt. As well, radio stations refused to play the band’s music, their LPs were burned and the Ku Klux Klan picketed their concerts.

Lennon eventually apologized for his statement, explaining he was not, actually, comparing himself or the band to Jesus. However, the damage was already done, affecting the band on a personal level.Â The protests made them unhappy with touring, and they stopped performing live following their 1966 US tour. 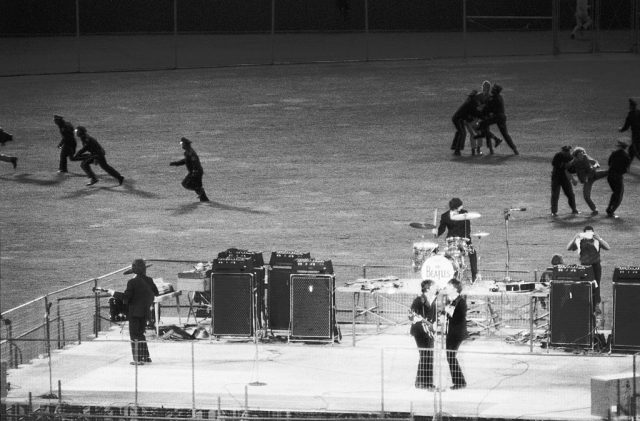 The Beatles’ final concert occurred on August 29, 1966, in San Francisco‘s Candlestick Park, with 25,000 fans in attendance. Knowing it would be their last performance, each member brought along a camera, while McCartney requested the show be recorded from the audience.

Speaking about the decision, Harrison said:

“We’d been through every race riot, and every city we went to there was some kind of jam going on and police control, and people threatening to do this and that… And [us] being confined to a little room or a plane or a car. We all had each other to dilute the stress, and the sense of humor was very important… But there was a point where enough was enough.” 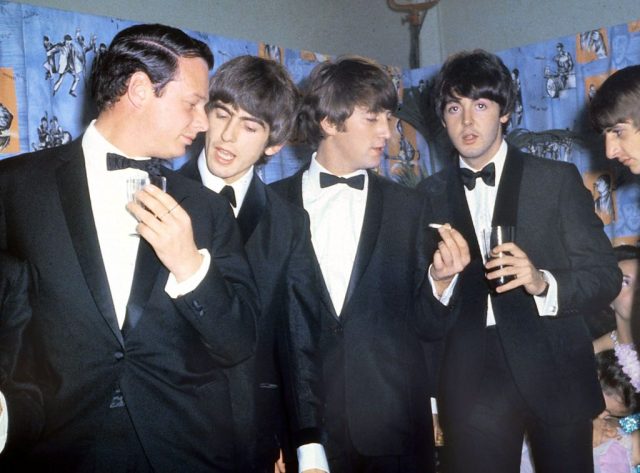 Epstein was the one to hold the Beatles together. Unfortunately, he was a rampant drug user, and his habit only got worse as his workload began to increase. He started with partaking in the use of stimulants, and later went on to take multiple pills a night. This led to him developing an addiction to the barbiturate-like sedative Carbromal, and he eventually moved on to Carbrital. The latter drug would result in his overdose death on August 27, 1967.

In footage shown in The Beatles: Get Back, McCartney comments on how Epstein was the one to keep them on track. No one could replace him, and his death is one of the reasons why the band fell apart. 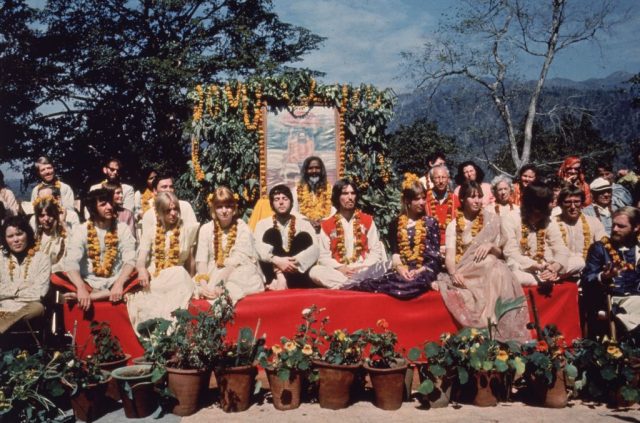 In February 1968, the Beatles traveled to India to take part in a Transcendental Meditation training course with Maharishi Mahesh Yogi.Â The trip was one of their most creative periods, with the band reportedly penning 48 songs, the majority of which ended up on the White Album. However, the trip was cut short following sexual misconduct allegations made against the Maharishi.

Speaking about the latter, Lennon said, “We made a mistake there. We believe in meditation, but not the Maharishi and his scene. We thought he was something other than he was.” 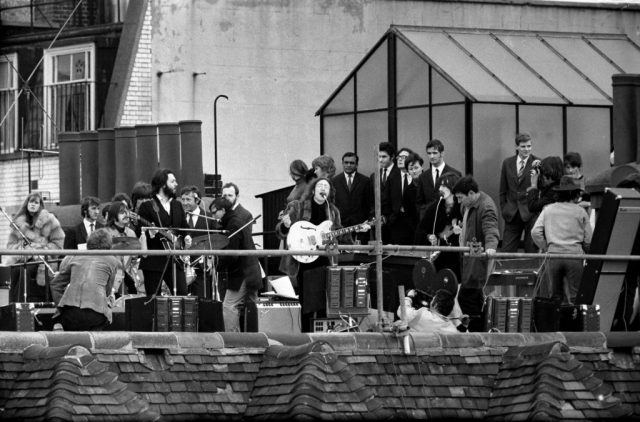 Let It Be is one of the most controversial rock albums, and the lead-up to its release was anything but stable. The plan was for the band to perform a concert at Twickenham Studios, which would be recorded and put on the record. However, their creative differences and tension led to Harrison temporarily leaving and the project being altered.

In the end, the live show was canceled, as per Harrison’s request. Despite this, the band decided to do one final impromptu performance atop the roof of Apple Corps headquarters, the company they’d created. 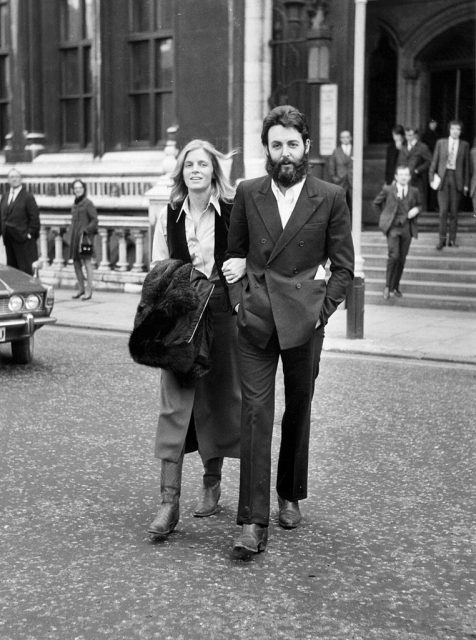 On April 10, 1970, McCartney announced he would no longer be working with the band. Internally, they had been dealing with a lot: Epstein’s death, fame, Lennon’s heroin use and his relationship with Ono, McCartney’s domineering personality, Harrison’s song output, and the failure of the Get Back (Let It Be) project.

McCartney wished to dissolve his partnership with the other members, leading him to bring a case before the High Court in January 1971. After much back and forth about the band’s finances, the partnership was officially dissolved on January 9, 1975. While there would be attempted reunions over the years, they never came together again. 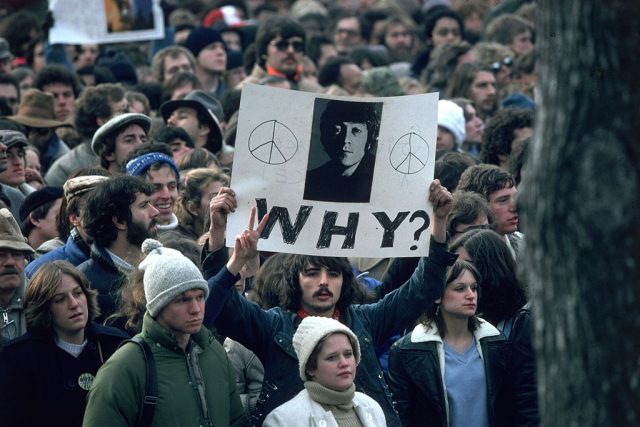 Lennon was fatally wounded after being shot outside his New York City apartment on December 8, 1980. The culprit, Mark David Chapman, was a former fan of the Beatles who claimed he’d committed the murder because of Lennon’s “more popular than Jesus” remark and the rock musician’s lavish lifestyle.

For his involvement, Chapman was charged with and convicted of second-degree murder and sentenced to 20-years-to-life, with the possibility of parole in 2000. Lennon’s death sparked mass mourning, with fans crowding outside his apartment for vigils, and his friends in the music industry dedicating performances to him.

Inducted into the Rock and Roll Hall of Fame 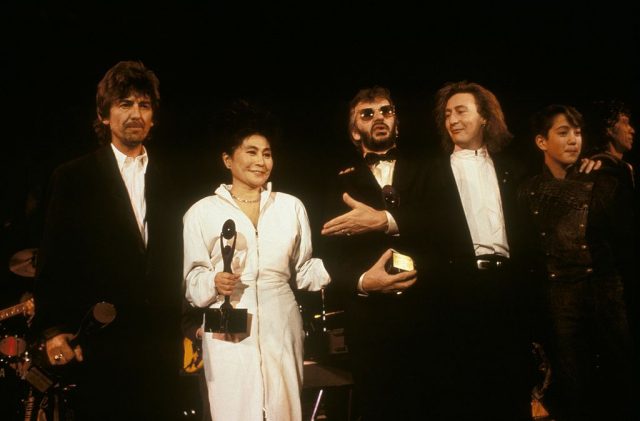 In 1988, the Beatles were officially inducted into the Rock and Roll Hall of Fame. Present at the ceremony were Harrison, Ono, and Starr, with McCartney opting not to attend due to “business differences,” saying he “would feel like a complete hypocrite waving and smiling with them at a fake reunion.”

Speaking at the ceremony, Harrison said:

“The reason we became a band is because of all the other people who are in the Hall of Fame already… We just wanted to get guitars and get in a band because we didn’t have proper jobs at the time. Anyway, it sort of turned out fine and got a bit bigger than any of us expected.” 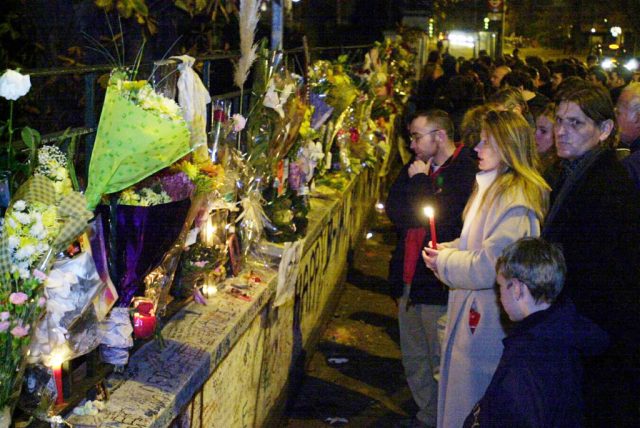 In May 2001, Harrison revealed he’d undergone an operation to remove a cancerous growth from within one of his lungs, and just two months later was treated for a brain tumor. Sadly, his short battle with cancer ended on November 29, 2001 and he died at a friend’s home in Los Angeles at the age of 58.

Harrison’s death sent shockwaves across the music community, with many Beatles fans coming together at public vigils to express their grief over the loss.

« 12 Pictures That Show Alternate Views of Iconic Moments in History
Alice Cooper’s Licence to Thrill Was Revoked: The Bond Themes That Weren’t »