The British countryside has been the inspiration for many artists and authors, with its green rolling hills, valleys, and rivers, all surrounded by quaint towns. One area, in particular, inspired both C.S. Lewis and J.R.R. Tolkien. The county of Herefordshire and the surrounding Malvern Hills provided the likeness for both Narnia and the White Mountains in The Lord of the Rings.

This area inspired another writer, Alfred Watkins, who would go on to author many books about a controversial system of energy lines in the area. These so-called ley lines are straight lines that connect a variety of different structures and landmarks, but have different meanings to different people.

The father of ley lines

Watkins, an amateur archaeologist, created the first popular ley line theory. The revelation came to him while he was in the hills surrounding Herefordshire in 1921. He noticed that many of the ancient buildings that he could see from the top of the hills were arranged along different straight lines. 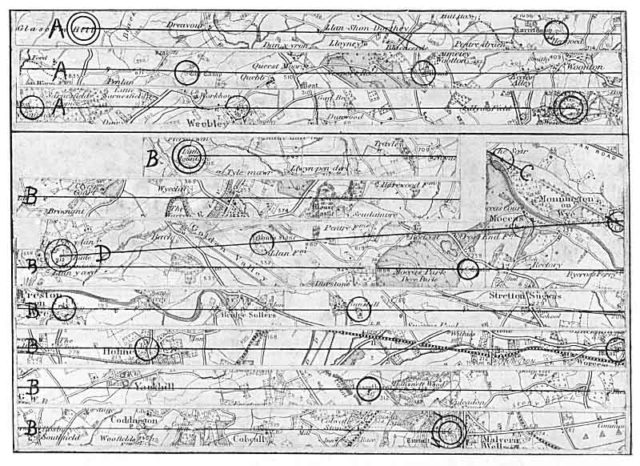 Watkin’s ley line theory was published in his first two books, Early British Trackways in 1922, and The Old Straight Track in 1925. The second of the two elaborated on the topics first proposed in the earlier book and is viewed as the first publication to write about, document, and map ley lines in Britain. Despite the extensive work he put into his theory, both publications were largely ignored by professional archaeologists.

Elaboration on the theory

It wasn’t until the 1960s that Watkin’s work really took off after his theories were elaborated on by John Michell in his books The Flying Saucer Vision and The View Over Atlantis. His later book argued that the knowledge needed to understand ancient ley lines and standing stones is lost. Tony Wedd, another author, put forward the idea that ley lines were created by prehistoric communities to guide alien ships. 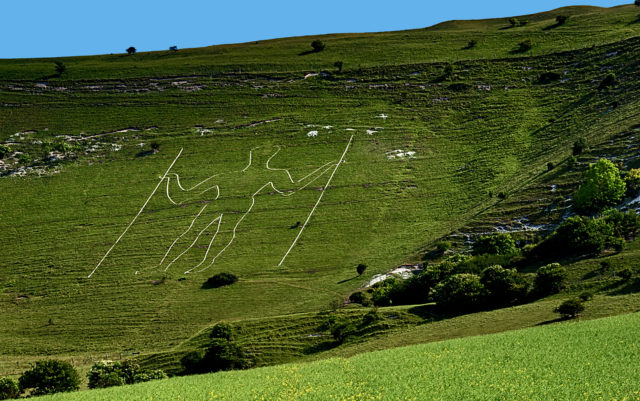 Long Man of Wilmington in Sussex, United Kingdom., which Watkins believed shows a prehistoric “dodman” with his equipment for determining a ley line. (Photo Credit: Steve Slater/ Flickr/ CC BY 2.0)

Along with the resurgence of Watkin’s ideas, even if they had evolved into something different, came the creation of a community of “ley hunters” who sought to find all of the different ley lines throughout Britain. These ufologists even had their own magazine, Ley Hunter. The entire movement wanted to welcome those with “a strong interest in the past but feel excluded from the narrow confines of orthodox academia.”

Although this group of ley hunters all agreed on the existence of the lines, they often disagreed on the specifics of these alleged ancient phenomena. Some thought that the ley lines simply acted as markers for energy currents on the earth, while others thought they directed and controlled energy. There is also disagreement among the broader community about which otherworldly phenomena could be connected to ley lines. 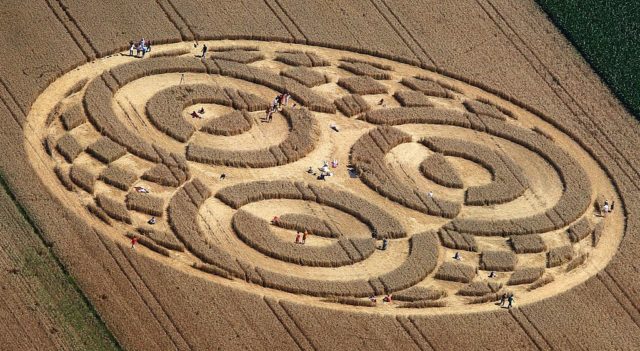 Although Watkin’s initial theory included no elements of spirituality or other intangible powers, in recent years some have associated the idea of ley lines with a number of mystic qualities. Some people claim that ley lines have magnetic fields, psychic powers, can heal, or that they are tied to UFOs, aliens, and crop circles around the world. Works like Michell’s contributed to these ideas.

Stonehenge and other ancient sites

These theories have extended to other historic sites around the world as well. Watkins mentioned the giant standing stones at Stonehenge and its surrounding structure, calling it “a very striking and convincing example of the connection between sun alignment, long-distance tracks and the use of the beacons.” 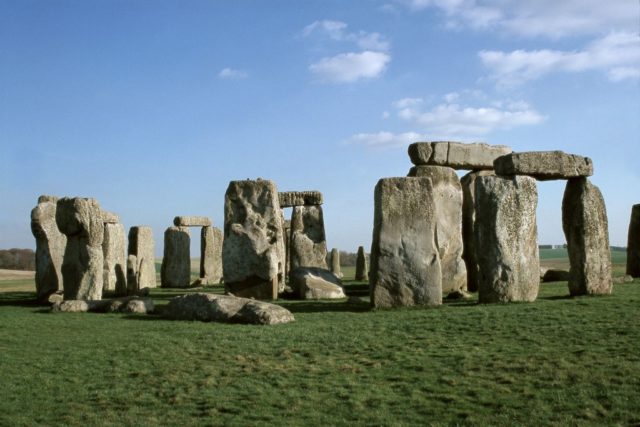 Many ancient, sacred sites of knowledge and religion happen to be along these lines. These adherents also cite references to the lines dating back centuries, although they are often called something other than ley lines, which is the modern term.

A scientific approach to ley lines

While there are many people who talk about ley lines and what they can do, one group is noticeably absent from the discussion. Ley lines aren’t discussed by scientists or written about in textbooks, primarily because they aren’t something that can be measured. Scientists literally have no way to detect them, and view the theory of ley lines as pseudoscience.

Scientists also believe that any connections between ancient structures can be explained by either practicality or coincidence. For example, smaller structures appearing in a line could be explained by access to building materials or roads. Connections on a larger scale, like with the many wonders of the world, are likely mere coincidences. 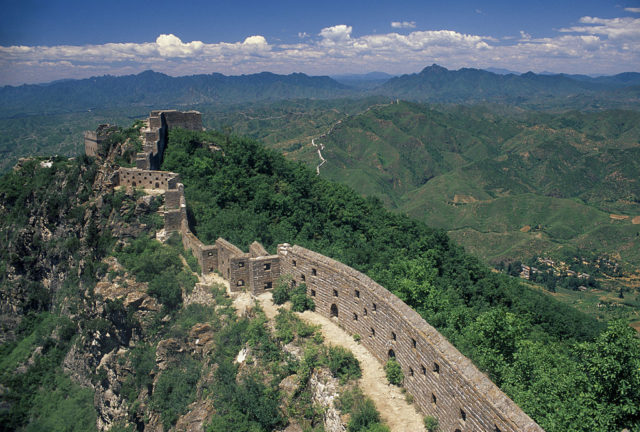 More from us: How ‘The Lord of the Rings’ was Forged in the Battle of the Somme

These scientists believe the location of the sites to be coincidental. It would be impossible for the builders of each large structure to know about the existence of the others, making any intersections unintentional. Modern scholars attribute the alignment of these structures to the practicality of building roads in a straight line, so it was more likely for important sites to appear in a line.

« Who Inherited the Fortunes of These Pop Stars When They Died?
How Steven Seagal Became Known as the Worst Host in ‘Saturday Night Live’ History »