They say a picture is worth a thousand words.

After 70 years on the throne, Queen Elizabeth II died on September 8, 2022. The Queen’s legacy can hardly be described in words, but these photographs detail her historic reign as the most prolific monarch in British history.

Life as a princess

Queen Elizabeth II was born Elizabeth Alexandra Mary on April 21, 1926, to Prince Albert the Duke of York and his wife Elizabeth during the reign of her grandfather King George V. As a little girl, Elizabeth was affectionately called “Lilibet,” and she spent most of her childhood growing up alongside her little sister Margaret in London.

When King George V died in 1937, Elizabeth’s uncle became Edward VIII. However, he abdicated in 1936 and Elizabeth’s father took the title of King George VI – making his firstborn daughter the direct heir to the throne. As Princess Royal, Elizabeth was taught by a governess all the essential subjects and preparation to one day be Queen. Even as a little girl, Elizabeth knew the responsibility that would one day be thrust upon her. Her cousin Margaret Rhodes once described the young princess as “A jolly little girl, but fundamentally sensible and well-behaved.” 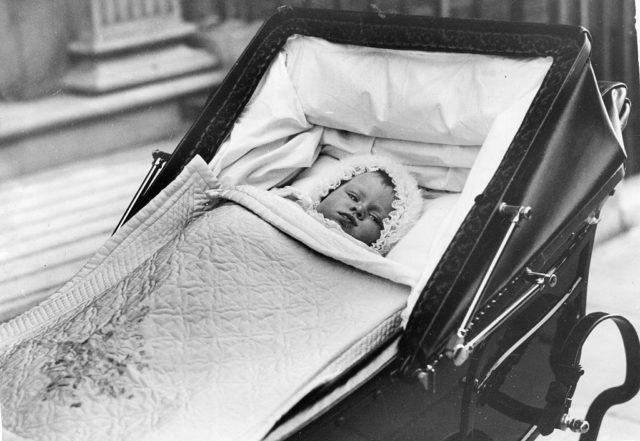 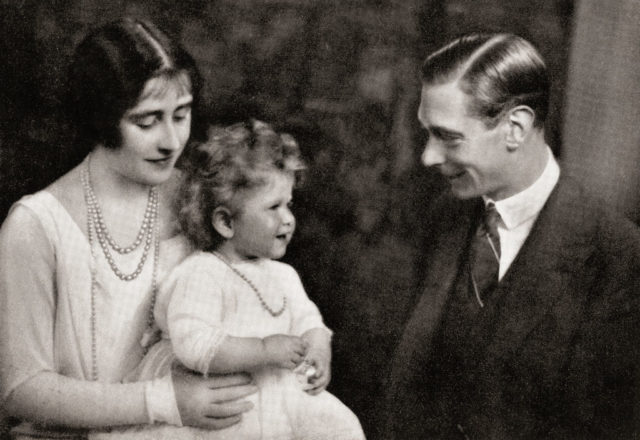 The Duke and Duchess of York with their daughter Princess Elizabeth, circa 1927. (Photo Credit: Universal History Archive / Universal Images Group via Getty Images) 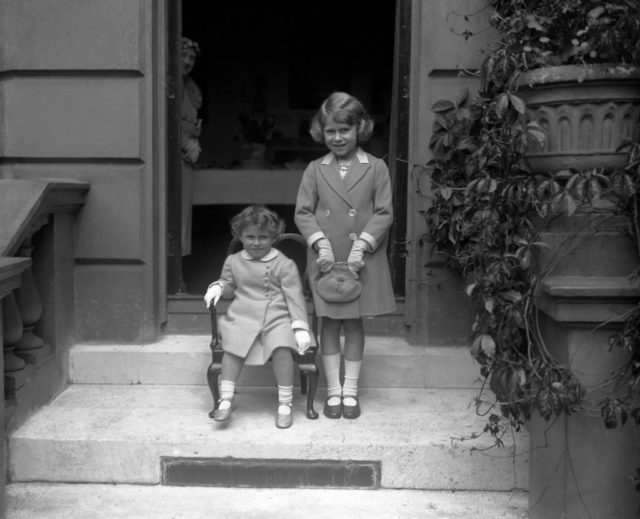 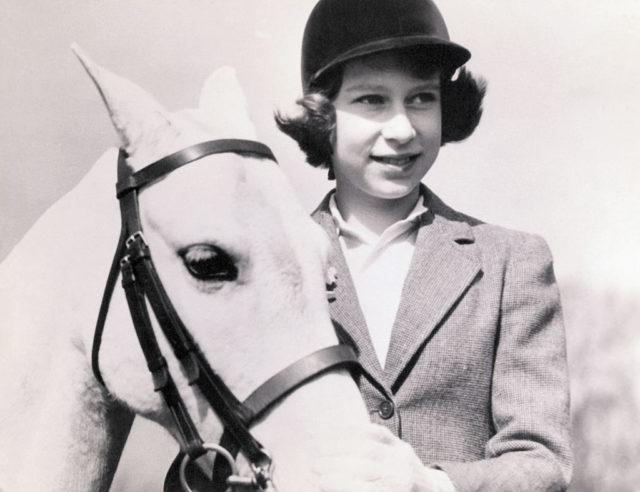 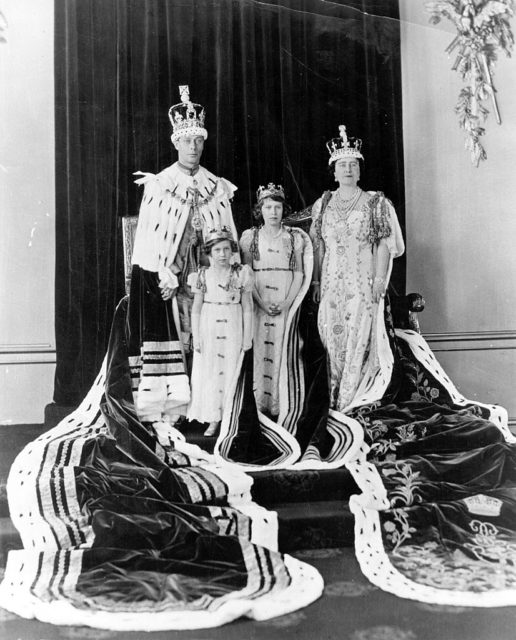 When war broke out across Europe, it was suggested that Princess Elizabeth and Princess Margaret should be evacuated to Canada to avoid the deadly bombings in London, but their strong-willed mother insisted that as long as the King remained at Buckingham Palace then so would herself and their children.

When she was just 14 years old, In 1940, the future Queen made her first radio broadcast during BBC’s Children’s Hour, stating: “We are trying to do all we can to help our gallant sailors, soldiers, and airmen, and we are trying, too, to bear our own share of the danger and sadness of war. We know, every one of us, that in the end, all will be well.”

By the time she was 18, Elizabeth was enlisted in the war and served as an ambulance driver. She is the first female member of the Royal Family to serve in the Armed Forces as a full-time member. 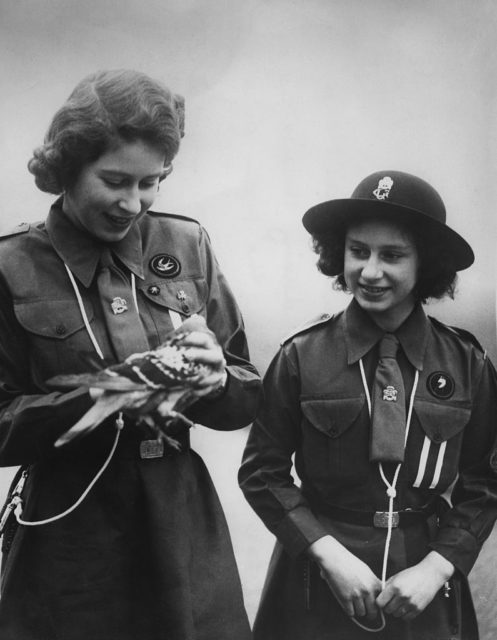 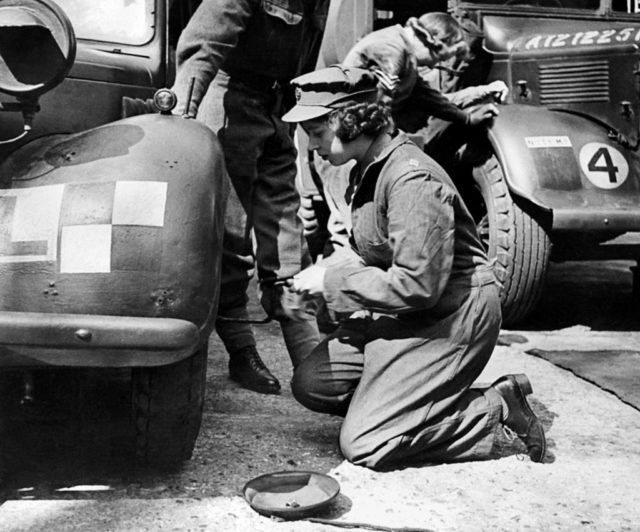 Then-Princess Elizabeth met Prince Philip Mountbatten in 1934. The second cousins once removed met again in 1939 at the Royal Naval College in Dartmouth, where 13-year old Elizabeth fell in love with 18-year old Philip. They exchanged letters while Philip served in the Royal Navy during the Second World War and the pair became secretly engaged in 1946.

King George VI, Elizabeth’s father, did approve of their coupling but insisted that a formal engagement wouldn’t be made public until Elizabeth turned 21 the following year. Princess Elizabeth’s engagement ring was designed by Philip himself using a three-carat center diamond and 10 smaller stones selected from a tiara belonging to Philip’s mother, Princess Alice of Battenberg.

Philip and Elizabeth were married on November 20, 1947, at Westminster Abbey. The ceremony was attended by 2,000 people – but in case that wasn’t enough, it was also broadcast over BBC radio to 200 million listeners worldwide!

On November 14, 1948 – just six days shy of their first wedding anniversary – Philip the Duke of Edinburgh and Princess Elizabeth welcomed their first child, Charles, the Prince of Wales. Two years later they welcomed their second child and only daughter Anne, Princess Royal. 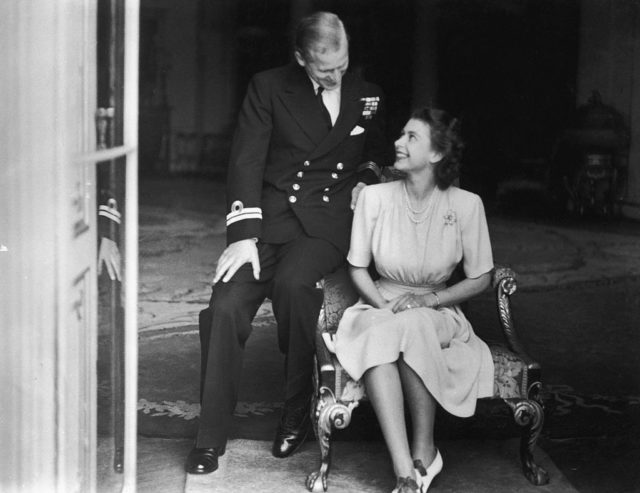 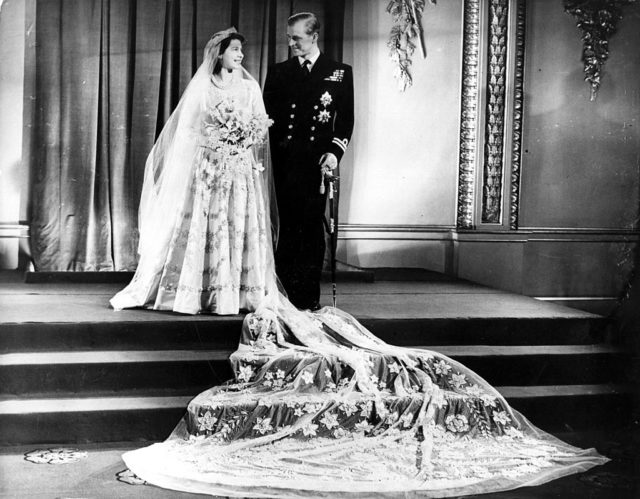 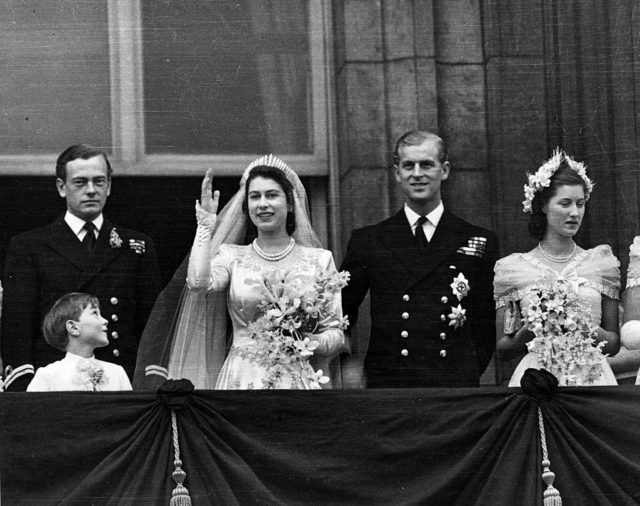 Princess Elizabeth and the Duke of Edinburgh on the balcony of Buckingham Palace, waving to the crowd shortly after their wedding at Westminster Abbey. (Photo Credit: Central Press / Getty Images) 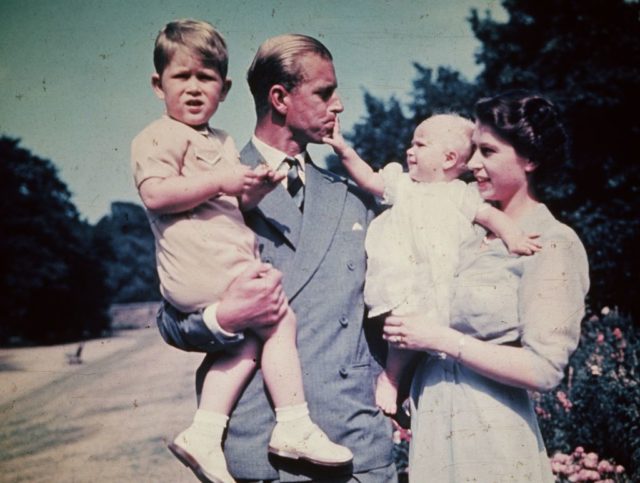 By 1951, George VI’s health was in rapid decline. This often meant that Princess Elizabeth would take his place during royal tours. In early 1952, Elizabeth and Philip jetted off to tour Australia and New Zealand, stopping in Kenya for a layover. On February 6, 1952, while at the Sagana Lodge in Kenya Elizabeth was informed of her father’s death and her accession to the British Throne.

Twenty-six-year-old Elizabeth was coronated at Westminster Abbey on June 2, 1953, for all the world to see, for the first time in history, on television. Following her coronation, the Queen set off on a Royal Tour around several Commonwealth countries where she was the head of state. 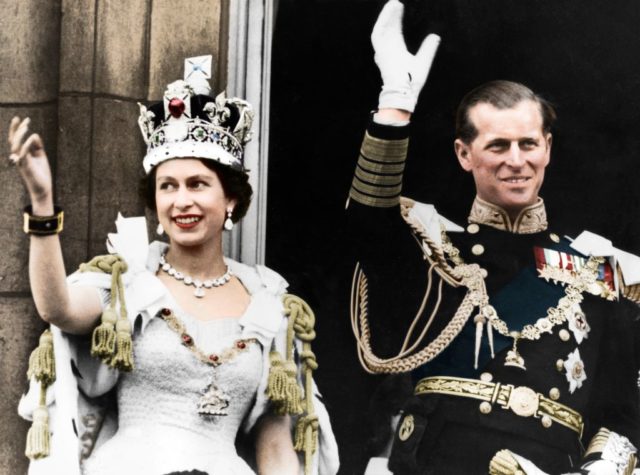 Queen Elizabeth II and the Duke of Edinburgh on the day of her coronation, 1953. (Photo Credit: The Print Collector / Getty Images) 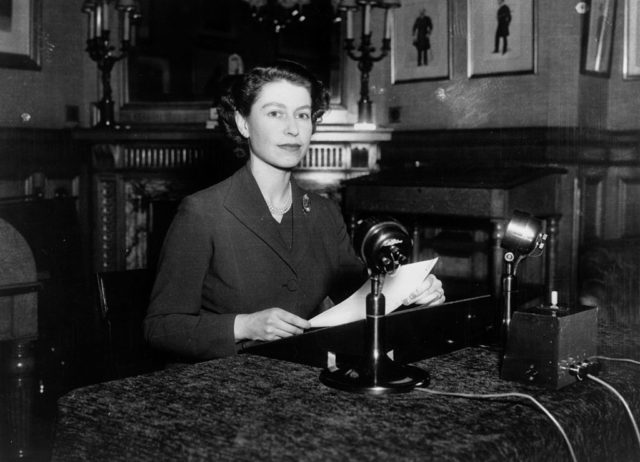 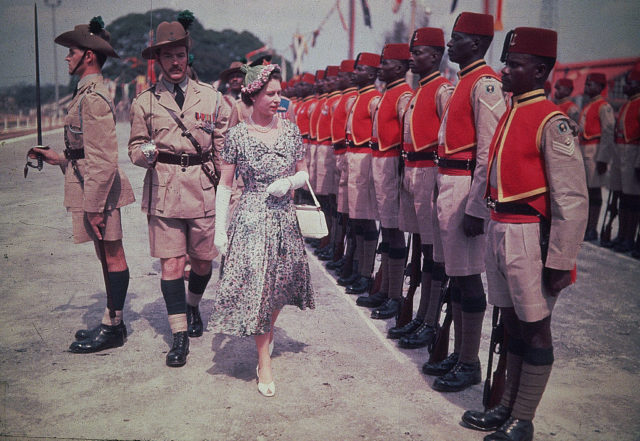 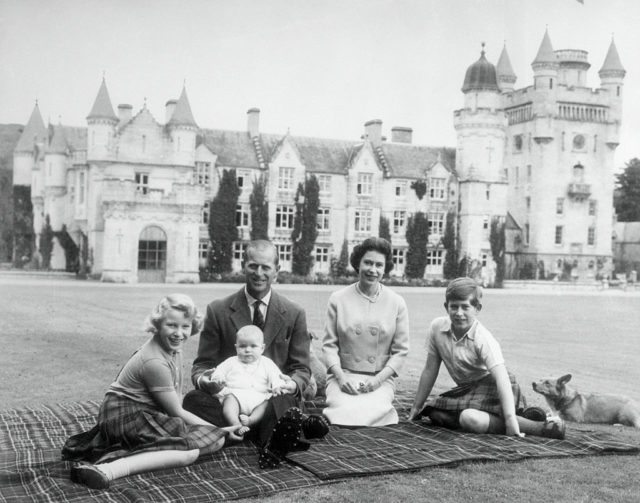 In 1960, the Queen and Duke of Edinburgh welcomed their third child Prince Andrew, and their fourth child Prince Edward in 1964. Andrew and Edward are the 8th and 13th in line to the throne respectively. Throughout the 1960s, ’70s, and ’80s the Queen continued to be a popular figure with admirers around the world.

In 1977, the Queen celebrated her Silver Jubilee, marking 25 years on the throne. 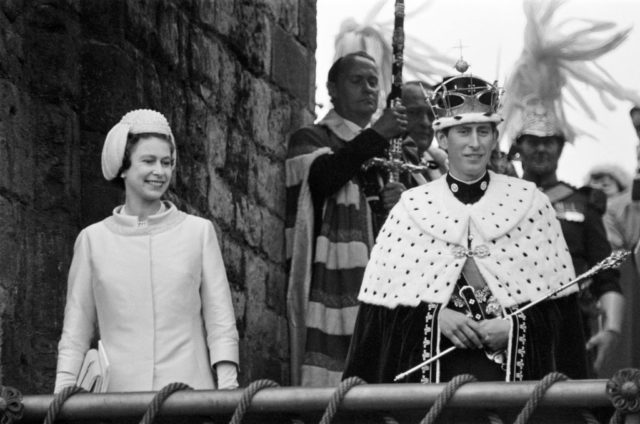 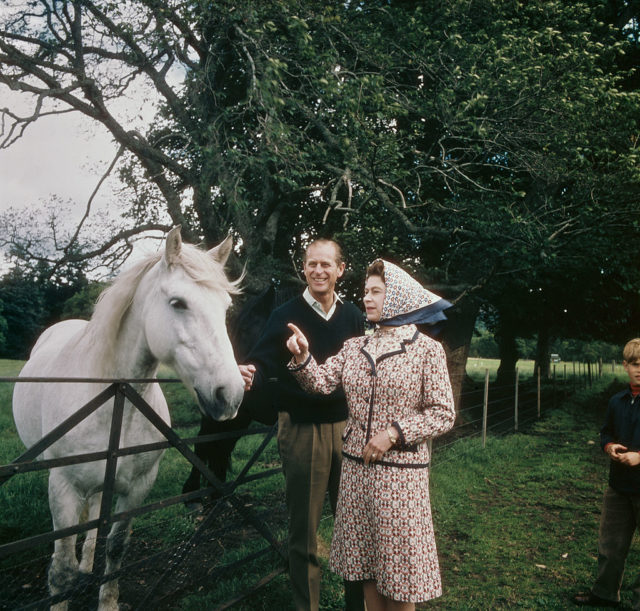 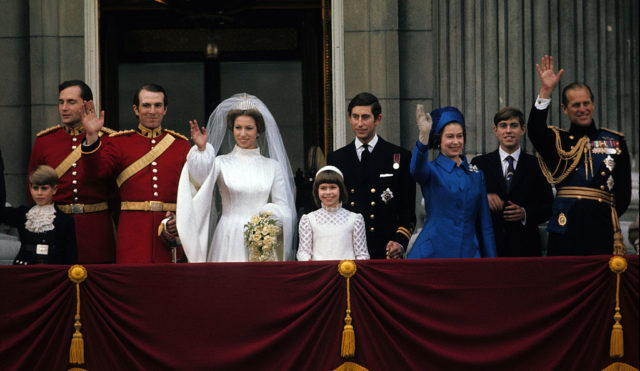 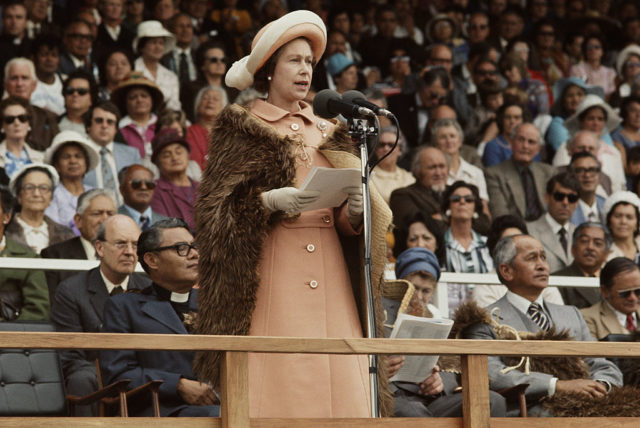 The ’80s and ’90s were an especially turbulent time for the Royal Family. In 1982, the Queen awoke to find an intruder – Micheal Fagan – in her bedroom. The Queen calmly negotiated with Fagan until security came to arrest him, but this wasn’t the only time the Queen handled a dangerous situation bravely.

In 1981, six shots rang out from the crowd while the Queen was riding on horseback during a Trooping of the Colour ceremony. The Queen didn’t panic as the shots – which were later proved to be blanks – were fired at her, wowing the public with her composure.

The year 1992 was one of the worst of the Queen’s reign, which she admitted at a speech commemorating her Ruby Jubilee. Calling it “annus horribilis” or “the horrible year,” several horrible incidents rocked the Royal Family including the divorce of the Queen’s daughter Anne from her husband Captain Mark Phillips, publications of photos surrounding an affair between Sarah the Duchess of York and a Texan oil tycoon, the revelation of intimate conversations with Princess Diana, and a fire in Windsor Castle which left countless rooms ruined.

By 1997, the public spectacle that was the crumbling relationship of the Queen’s eldest son Prince Charles and his former wife Diana Spencer was one of the biggest topics in the tabloids. In 1995, the Queen wrote to the couple advising them to divorce, which was finalized the following year. In August of 1997, the unthinkable happened: Diana was killed in a car crash in Paris, leaving her two sons William and Harry without a mother. Her death remains one of the most tragic moments for the Royal Family in recent history. 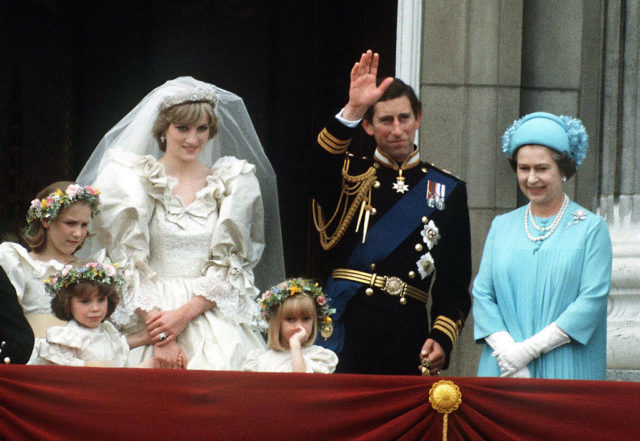 The Prince and Princess of Wales pose on the balcony of Buckingham Palace with the Queen on their wedding day, 1981. (Photo Credit: Terry Fincher / Princess Diana Archive / Getty Images) 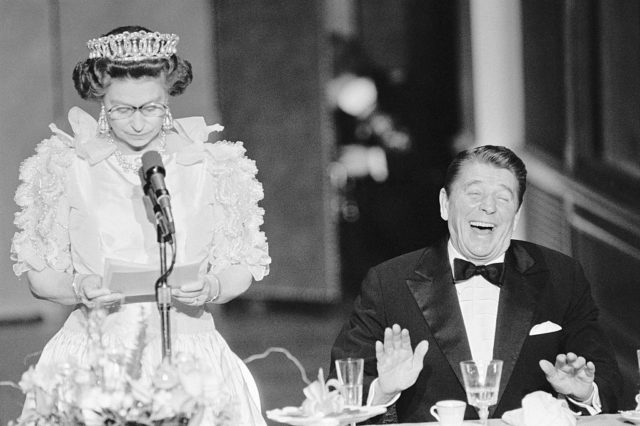 President Reagan laughs following a joke by Queen Elizabeth II, who commented on the lousy California weather she has experienced since her arrival to the States, 1983. (Photo Credit: Bettmann / Getty Images) 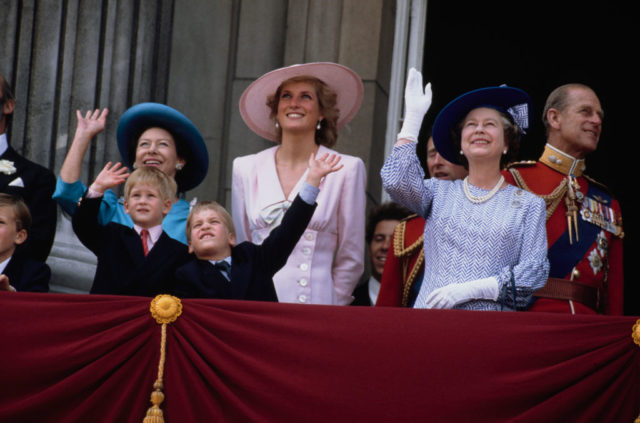 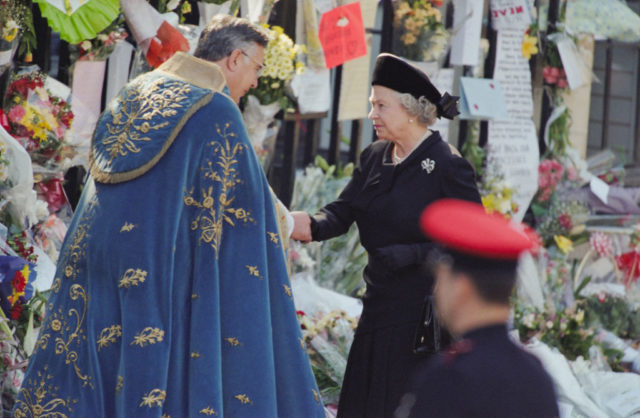 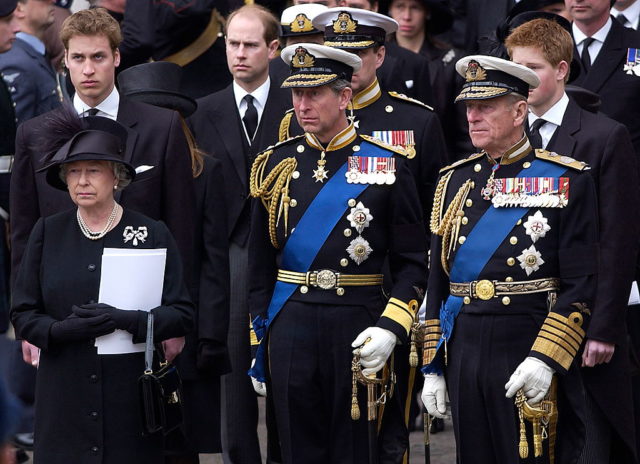 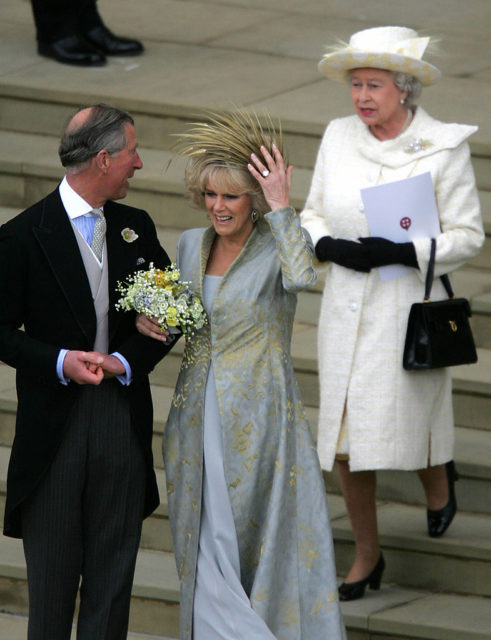 The Prince of Wales and The Duchess of Cornwall on their wedding day with Queen Elizabeth II. (Photo Credit: Anwar Hussein Collection / ROTA / WireImage / Getty Images) 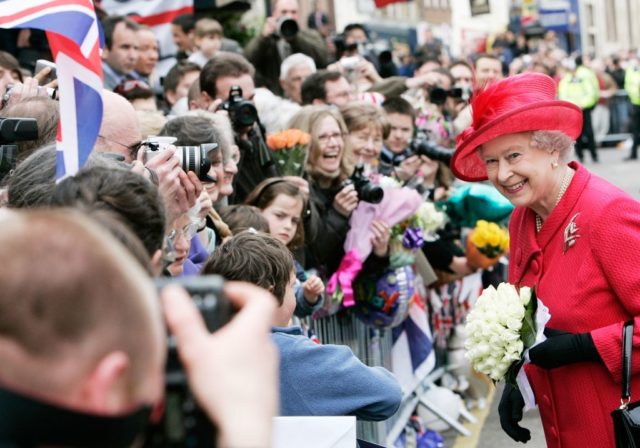 The last decade of Queen Elizabeth’s life was filled with joyous moments, including the weddings of several grandchildren and the welcoming of her first great-grandchildren.

In 2021, her husband of 72 years Prince Philip died at age 99. Following the loss of her husband, the Queen’s health began to decline – especially after being infected with COVID-19 in April. On September 6, 2022, she met with the 15th and final British Prime Minister to be elected during her reign, Liz Truss.

On September 8, 2022, the media warned the public that the Queen’s health was declining. While at her favorite home, Balmoral Castle in the Scottish highlands, the Queen passed peacefully surrounded by her family members. Her oldest son Charles was pronounced King Charles III following her death. 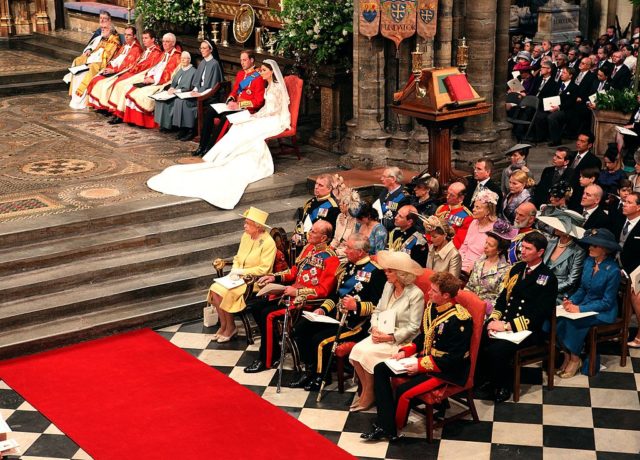 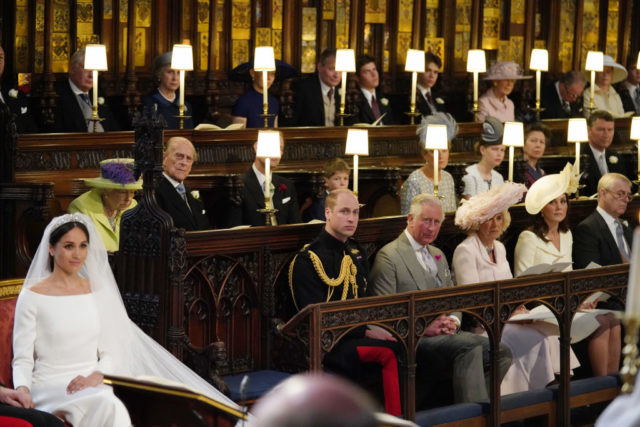 Meghan Markle in St George’s Chapel, Windsor Castle for her wedding to Prince Harry watched by The Queen and other members of the royal family in 2018. (Photo Credit: Jonathan Brady – WPA Pool / Getty Images) 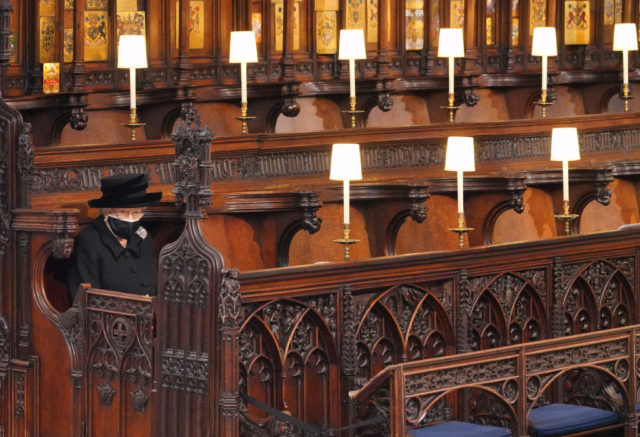 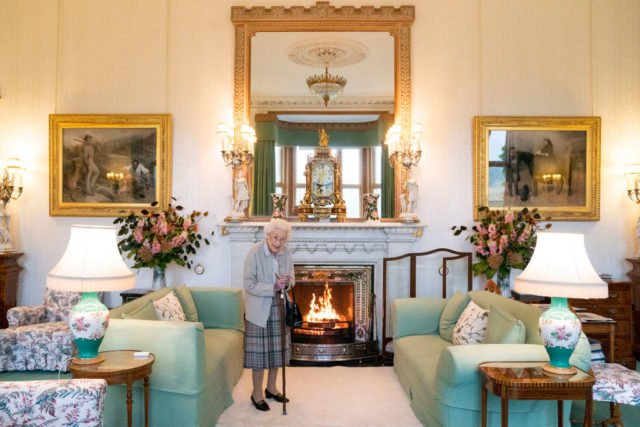