The Mütter Museum is located in Philadelphia and boasts an incredible collection of medical oddities and curiosities that will have visitors saying “ewwww” while also thinking “wow.” There are oddities like conjoined twins, human skeletons, and abnormal organs, along with a plethora of medical tools and literature to keep visitors well-informed, just as the museum’s founder wanted.

Thomas Mütter, the founder of the Mütter Museum 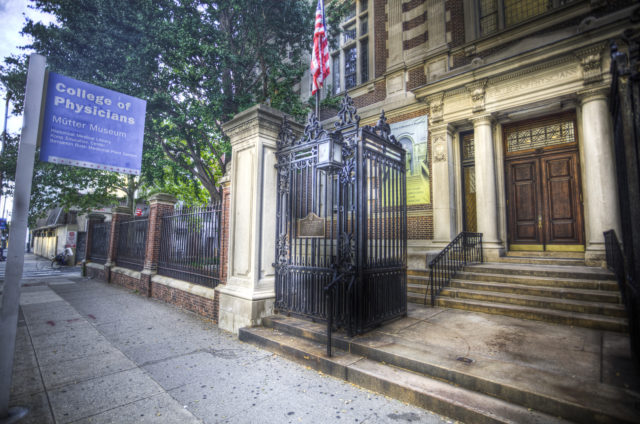 The roots of the Mütter Museum trace back to Thomas Dent Mütter, who was born in Virginia in 1811. At the young age of eight he was orphaned, but as he grew up he managed to find a way to attend the University of Pennsylvania. He graduated from this institution in 1831, studied in Paris and London, and returned to the United States where he opened his practice in Philadelphia.

Mütter was an exceptional medical practitioner and surgeon and became well-known for his unique empathy for his patients. For this, Mütter grew a large and loyal clientele.

Mütter’s empathy caused him to want to help even the most hopeless of cases, including people with severe disfigurements. Over time he grew a reputation for being extremely knowledgeable and capable of treating rare conditions, and this is how he amassed his collection of research material and medical oddities.

A sizeable donation to the College of Physicians of Philadelphia 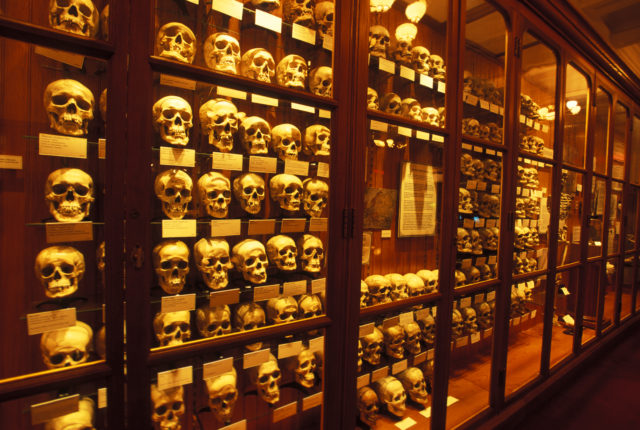 The collection of human skulls on display at the Mütter Museum in Philadelphia. (Photo Credit: W. Metzen / Classicstock / Getty Images)

As Mütter grew older, he became more and more determined to reform medical education. Having previously used his medical collection to teach his students, Mütter eventually approached the College of Physicians of Philadelphia. He made a sizeable donation of all of his medical specimens and research.

Mütter died in 1859 at the young age of 48 due to gout and lung disease, and his collection was officially donated to the College. It included 1,700 objects and an additional $30,000. The College fulfilled his wishes and erected the first Mütter Museum in 1863.

The Mütter museum continues to grow 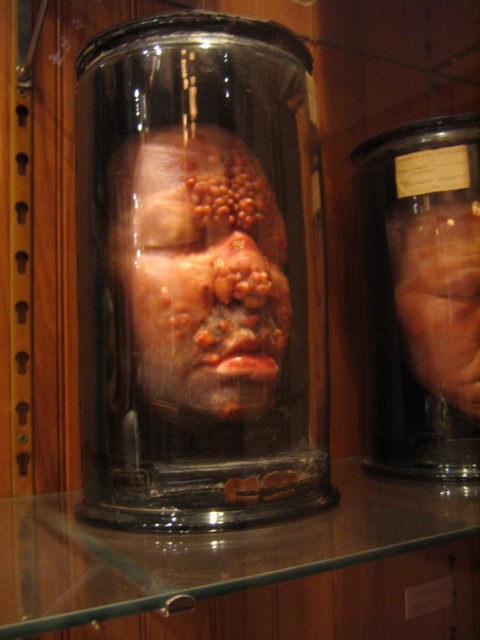 A human head sits preserved in a jar, eyes closed and covered in blemishes. (Photo Credit: istolethetv / Flickr CC BY 2.0)

Over the years, the Mütter Museum continued to grow, far beyond the scale of the walls of the original building erected by the College in 1863.

Over the years, the museum has acquired over 20,000 specimens and objects and has amassed a remarkable literary and research collection. The creepy curiosities of the Mütter Museum have brought people from around the world to their doors, and annual attendance surpasses 130,000 visitors.

Medical oddities at the Mütter Museum 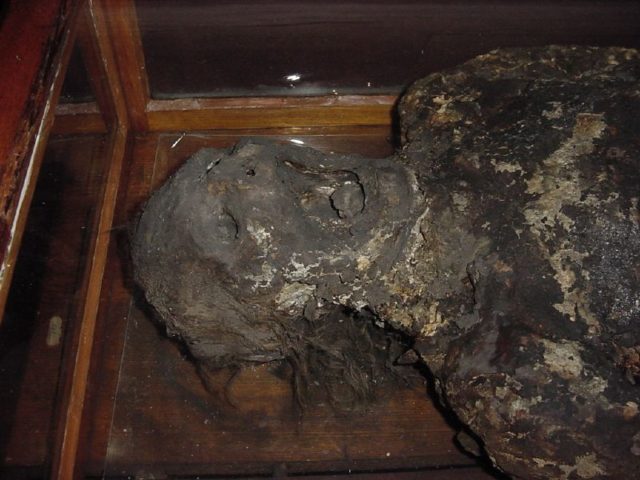 The Soap Woman sits on display at the Mütter Museum, her mouth agape and her body the texture of soap. (Photo Credit: John Donges / Flickr CC BY-NC-ND 2.0)

Included in the collection are a number of strange and disturbing oddities that include the tumor that was removed from former president Grover Cleveland’s jaw and former president Abraham Lincoln’s thorax. A giant colon sits on display at the Mütter Museum, as well as a plaster of Chang and Eng Bunker, conjoined brothers whose fame gave rise to the term “Siamese twins.”

Another oddity on display is the Soap Woman, who died from yellow fever in the 19th century. She was buried in soil with a certain chemical composition that turned her body into soap. There’s also a collection of objects that have been swallowed and removed, including over 2,000 small items like bones, coins, and dental material. 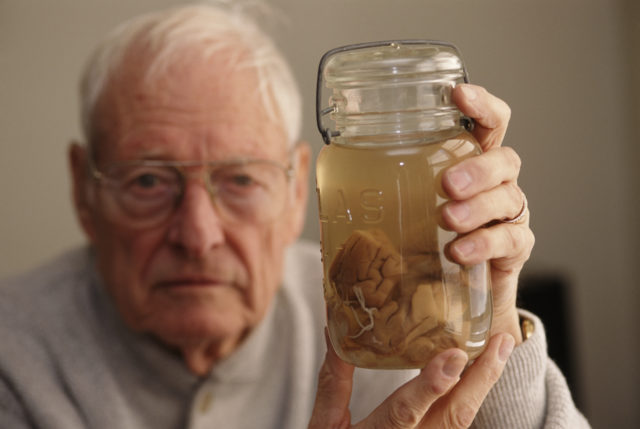 Some of the most interesting curiosities on display are a number of brains, including the brains of people who suffered from epilepsy and the brain of a murderer. Most remarkably, the Mütter Museum boasts a collection of 46 microscopic slides, each containing a sliver cut from Albert Einstein’s brain.

Although Einstein’s body was cremated, his brain was removed by pathologist Thomas Harvey, who used it for scientific purposes. Eventually, the slivers of Einstein’s brain found their way to the Mütter Museum, which is the only museum to permanently house part of the most brilliant mind of the 20th century. 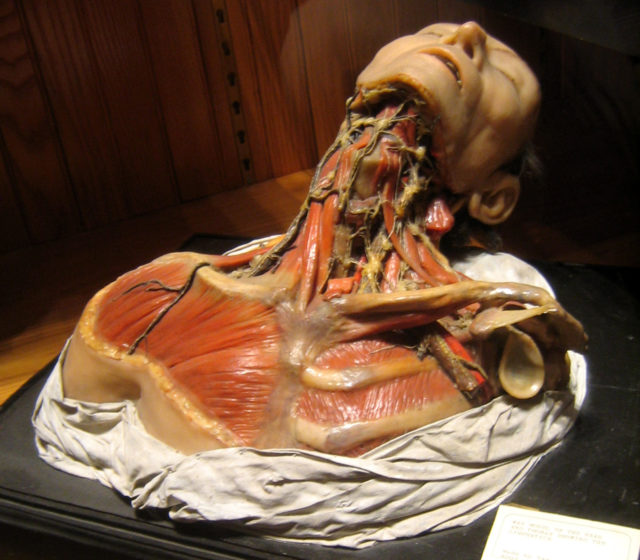 On display at the Mütter Museum sits a diorama of the human chest and neck. (Photo Credit: istolethetv / Flickr CC BY 2.0)

One of the exhibits previously featured at the Mütter Museum was “Broken Bodies, Suffering Spirits: Injury, Death, and Healing in Civil War Philadelphia.” The exhibit explores the injuries of war, how they were treated using the medical understanding of the time, and what the experience was like for the victims.

Surgical tools and samples of weapons designed to destroy the human body are also put on display at the museum. One of the most unique components of the exhibit is the interactive opportunity that allows visitors to see what it would be like to have an arm amputated. 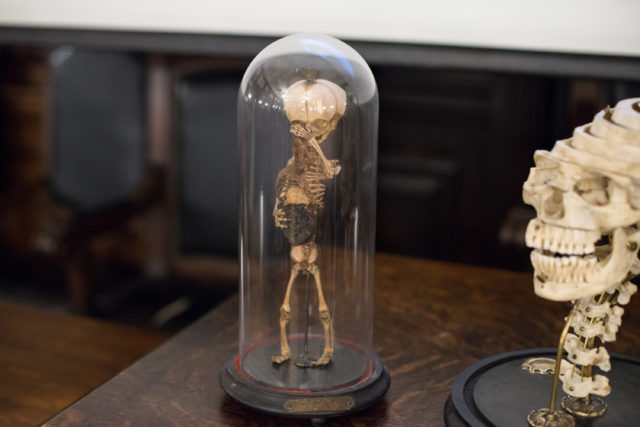 A tiny skeleton sits on display at a lecture event held at the Mütter Museum, circa 2015. (Photo Credit: Megan Rosenbloom / Flickr CC BY-NC 2.0)

Another exhibit of the Mütter Museum is “Grimm’s Anatomy: Magic and Medicine.” The iconic Grimm fairytales are known by many, but some people tend to forget the more disturbing side of the stories. This exhibit delves into the gruesome details of the tales and shows real-world examples of the grotesque bodies of fairytale characters, as well as medical instruments.

“So many of the Grimms’ fairy tales deal with the corporeal human body, whether dealing with sicknesses or a magical transformation or the various unpleasant things that can happen to the body,” said Anna Dhody, curator of the exhibit. “Quite often, there is no happily ever after.”

More from us: 6 Body Parts You Can Actually Visit and Who They Belonged To

The Mütter Museum is open to the public six days a week, and is definitely worth a visit for anyone who is ready to be “disturbingly informed.”

« The Most Unexpected Things That Have Been Revealed in the Extreme Heat
A ‘Heartless Move’: King Charles’ Staff at Clarence House Told They Could Lose Their Jobs »