Dale Dye is a career military man. Enlisting in the US Marine Corps just two years into adulthood, he served three tours in South Vietnam before retiring and starting his own cinematic military consultation company. He’s dedicated his post-retirement life to ensuring that film and television productions properly portray the realities of combat, and it’s a passion that’s afforded him much-deserved recognition.

Dale Dye’s early interest in the US Marine Corps

Dale Dye was born on October 8, 1944 in Cape Girardeau, Missouri. His father was a liquor salesman, and while he was young Dye would accompany him to various working-class taverns in the St. Louis area.

It was during these trips that he heard war stories from veterans who’d served during World War II. One account that stuck with him was from a Marine who’d fought in the Pacific Theater. After looking up the Battle of Iwo Jima, Dye decided to join the US Marine Corps once he was old enough. 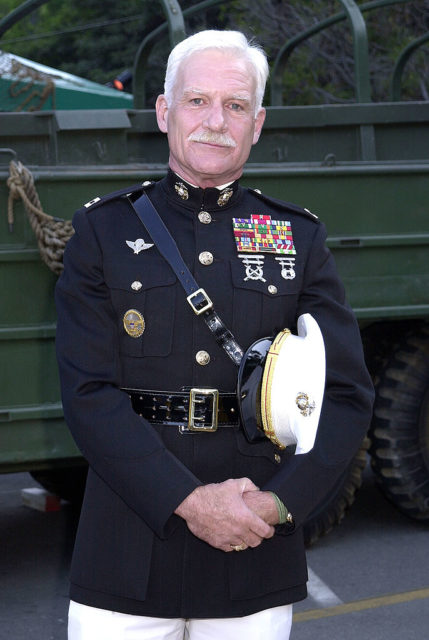 Dye received his education from both the Missouri Military Academy and St. Joseph’s Military Academy. He’d hoped to attend the US Naval Academy, but his poor math and sciences skills led to his failing the entrance exam three times. Having exhausted his family’s funds during his education at the military academies, he decided to follow his original aspirations of becoming a Marine.

Service during the Vietnam War

In 1965, Dale Dye’s Marine unit was one of the first deployed to Vietnam. While there, his superiors noticed he had an interest in literary works and impeccable observational skills, and suggested he reclassify as a combat correspondent. He took their advice and became one of the few correspondents in the Marine Corps.

In this position, Dye witnessed firsthand the battles many of the low-ranking infantrymen had to fight. This helped him develop a respect for them and others who took on the brunt of the action. He ensured he shared their stories in military publications and the hometown newspapers of his fellow Marines. 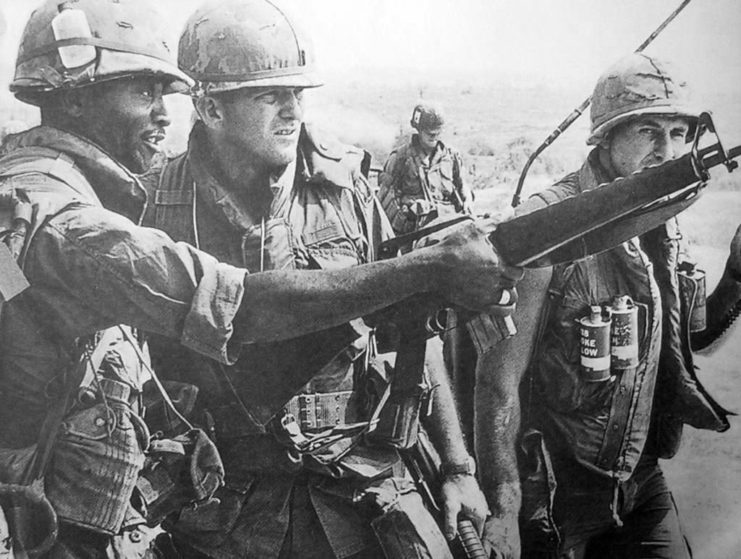 In 1968, Dye was wounded during the Tet Offensive. While recuperating, the unit he was traveling with – 2nd Battalion, 3rd Marines – was preparing for Operation Ford. He persuaded the battalion commander to let him accompany them, and during the next week witnessed a number of firefights between the battalion and soldiers with the North Vietnamese People’s Army of Vietnam (PAVN).

On March 18, 1968, Dye took the position of an assistant machine gunner who’d been killed in combat. Despite the position being isolated and the fact that he was injured, he exposed himself to enemy fire to retrieve the ammunition needed to hold off PAVN soldiers during an all-night firefight.

This wasn’t the first time he exposed himself to enemy fire. He did so on a number of occasions in order to rescue his fellow Marines and a wounded Navy corpsman. As a result, he was awarded the Bronze Star Medal with Combat “V” for heroism. 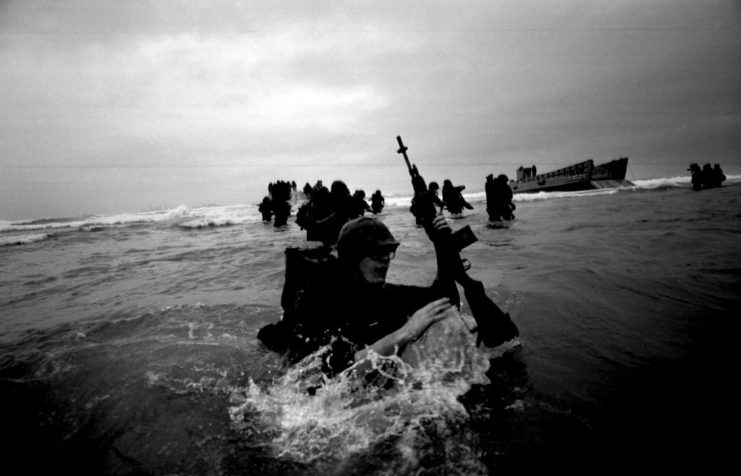 Dye served three tours in South Vietnam and participated in 31 combat operations. For his efforts, he received a number of decorations, including the Meritorious Service Medal, two Combat Action Ribbons, the Joint Service Commendation Medal, and the Navy and Marine Corps Achievement Medal with Combat “V.”

Dale Dye spent 13 years as an enlisted Marine. Prior to being commissioned as a warrant officer in 1976, he’d risen to the rank of master sergeant. Upon becoming a warrant officer, he joined the Limited Duty Program and became a captain. He is considered a “mustang” – an enlisted man who receives a commission as an officer. 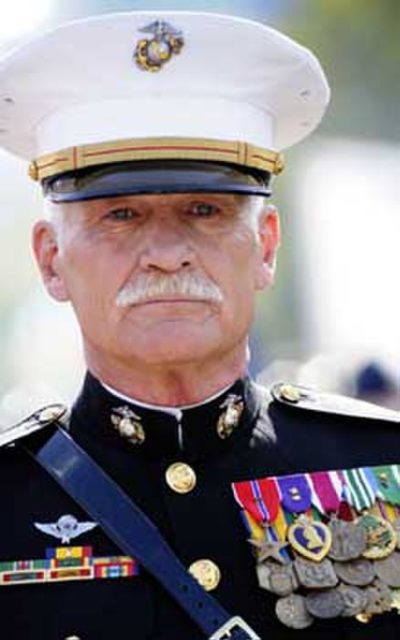 While a captain in the Marine Corps, Dye was deployed to Beirut as part of the Multinational Force in Lebanon in 1982-83. It appeared luck was on his side, as shortly after he returned to the US the Marine barracks were attacked, resulting in the deaths of 241 American servicemen.

In 1984, Dye officially retired from the Marines.

Work in the entertainment industry

After leaving the Marine Corps, Dale Dye became a correspondent for Soldier of Fortune, a military magazine. He worked with the publication for one year, during which he was stationed in Central America. He provided guerrilla warfare training to El Salvadorian and Nicaraguan troops, in addition to his reporting duties.

Dye also served as a military commentator for KFI AM 640 in Los Angeles during the Iraq War. 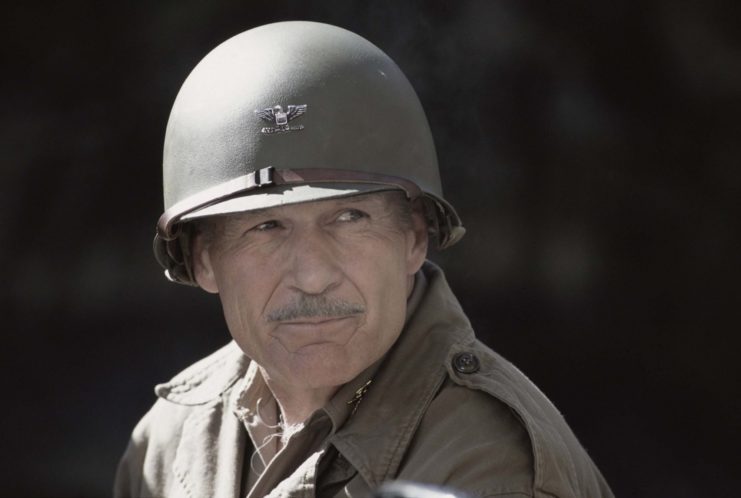 Dye is the founder of Warriors, Inc., a technical advisory company dedicated to the realistic portrayal of military combat and personnel in Hollywood productions. It’s the top military consultant in the entertainment industry, and provides research, planning, staging and on-set consultation for film and television.

After unsuccessfully offering his services to a number of prominent directors, Dye pitched his work to Oliver Stone, a fellow Vietnam War veteran who was in the midst of filming his 1986 box office hit, Platoon. He put the lead actors through a 30-day mock bootcamp, during which he limited their food and water. When they slept, he fired blanks to keep them awake.

Along with working with Warriors, Inc., Dye has also appeared in a number of popular films and television shows, including The Pacific (2010), Band of Brothers (2001), Saving Private Ryan (1998), Casualties of War (1989), Mission: Impossible (1996) and Born on the Fourth of July (1989). He also lent his voice to the Medal of Honor video game franchise. 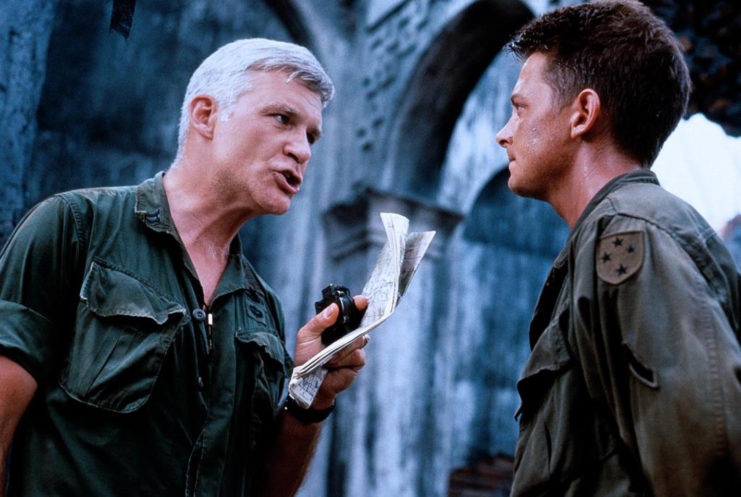 More from us: Popular Movies That Were Written By Military Veterans

In 2017, Dye was named an honorary member of the 506th Infantry Regiment for his work in increasing the realism and quality of combat portrayals in cinematic productions.