The lightweight and portable Panzerfaust 3 has been in the news as of late due to its use in the ongoing conflict between Russia and Ukraine. A newer version of the World War II-era Panzerfaust, it allows soldiers to penetrate all forms of tank armor, thanks to its use of shape-charged warheads.

The use of Panzerfausts during World War II

During WWII, the German Army used the Panzerfaust, a disposable, preloaded launcher that fired High Explosive Anti-Tank (HEAT) warheads. Its small size and recoilless nature meant it could be used by a single infantryman. 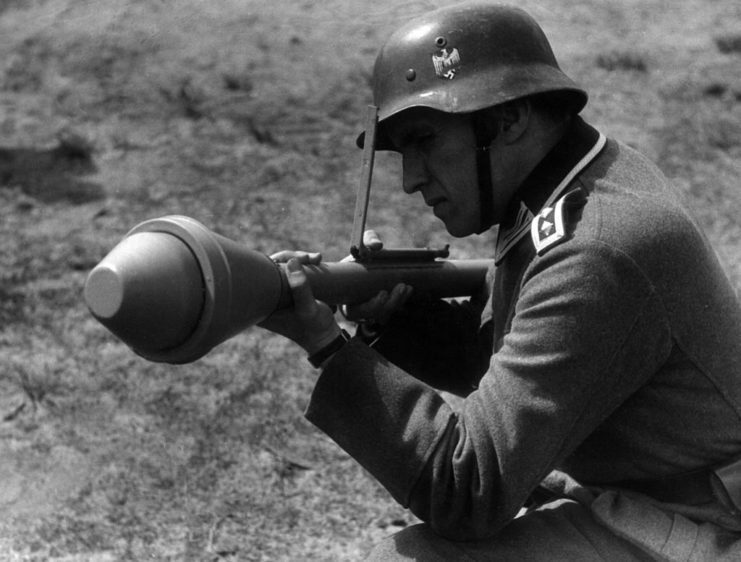 The Panzerfaust was introduced in 1943. It cost relatively little to produce and was decently effective, with the ability to penetrate armor up to eight inches thick. It did, however, lack range, meaning it was more useful in urban combat, as opposed to fighting on the front.

By the end of the war, around 6.7 million had been produced.

The development of a new weapon in West Germany

Following the formation of the Bundeswehr (the armed forces of the Federal Republic of Germany) in 1956, all troops were tasked with “fighting armored vehicles and tanks.” To do this, they were equipped with the Leichte Panzerfaust (PzF) 44 mm Lanze launcher and the Carl Gustaf 84 mm recoilless rifle.

Calls for a more effective weapon first came in 1973, with the advent of reactive and active armors on combat vehicles. Warsaw Pact member countries knew they needed to develop more effective technologies that could not only pierce through these new types of armor but were also effective at long ranges. 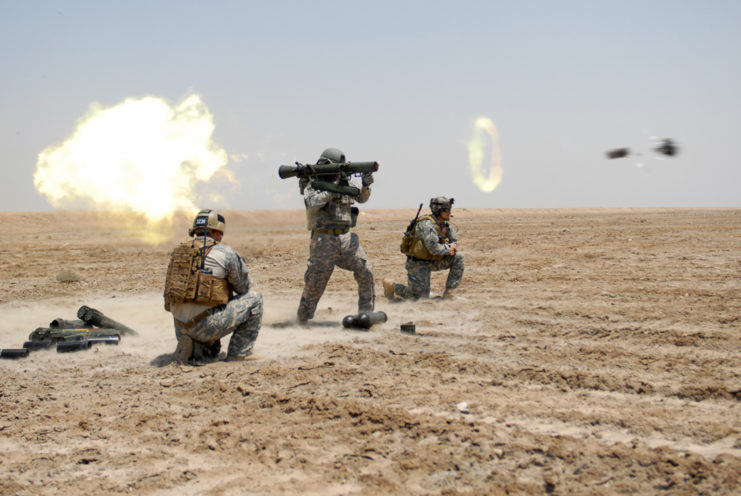 In 1978, Dynamit Nobel AG began to design and develop what later became known as the Panzerfaust (PzF) 3. It underwent its first test in 1986.

The Panzerfaust 3 is known for its compact, lightweight design, which allows it to be fired by a single infantryman. Its ergonomics follow a pre-defined standard, and the controls, including its pistol grip, were designed to be easily handled from all positions.

The PzF 3 features a disposable canister with a 110 mm HEAT warhead – the DM12 or DM12A1. It follows the shaped-charge principle and quick response of the percussion fuse, meaning its impact velocity doesn’t minimize the effect on the target. The warhead also features a safety mechanism, arming after flying five meters and detonating on impact or when its propellant is exhausted.

The original PzF 3 had a combat range of 15-to-300 meters against moving targets and between 400 and 600 meters against stationary ones. As it didn’t have significant backblast, it could be fired from tight places. This was due to the plastic granulate that filled its rear, minimizing the blast effect with what’s known as the recoilless countermass principle. 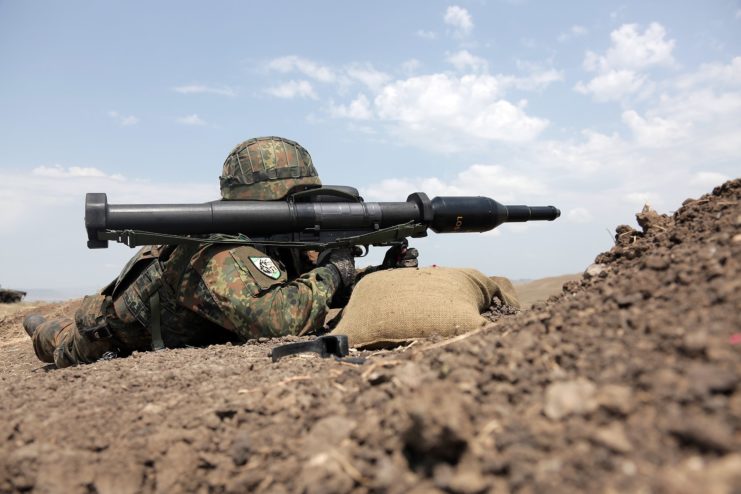 Despite being an upgrade from the PzF 44 and the Carl Gustaf 84 mm, the PzF 3 had its issues. Infantrymen complained it was excessively cumbersome, and the firing mechanism was prone to jamming. It could also only fire one shot at a time and was ineffective against heavy and new armor variants.

Many Panzerfaust 3 variants have been produced over the decades, the first being the PzF 3-T. Developed during the late 1990s, it was a vast improvement on the original. It introduced the dual hollow charge 3-T tandem HEAT warhead, which included an explosive charge in its spike. This pierced explosive reactive armor (ERA), allowing a second warhead to damage a tank’s primary armor. 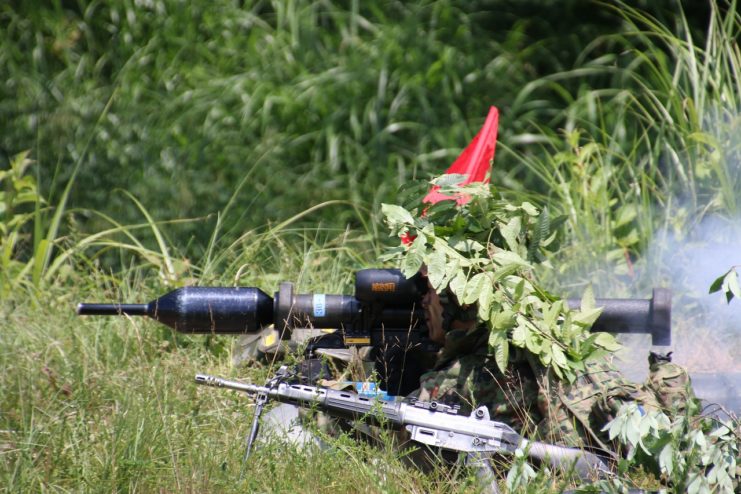 The PzF 3-T was followed by other variants. Of the most effective were the PzF 3-T600 and the PzF 3-IT, the latter of which could defeat heavily-armored tanks with ERA. Its newest variant, the PzF 3-IT600, can travel up to 600 meters thanks to its Dynarange fire control unit, which assists with sighting and targeting.

Other notable variants are the PzF 3LR, with a range of 800 meters and the ability to penetrate 700 mm of armor, and the Bunkerfaust, an anti-structure version designed for urban combat. It uses a 106 mm tandem High Explosive Dual Purpose (HEDP) rocket that can break through buildings, field fortifications, bunkers and pillboxes.

The Panzerfaust 3 in service

The Panzerfaust 3 entered service in 1987 with the Bundeswehr. However, the Germans didn’t officially adopt the weapon until 1992. In 1989, Japan became its first international customer, followed by Switzerland two years later.

Today, the PzF 3 is operated by at least 11 countries, including South Korea, Peru, Austria, Iraq, the Netherlands, Germany, Belgium, Italy, and Mauritius. US Special Forces tested the weapon, but the decision was made to not pursue it. 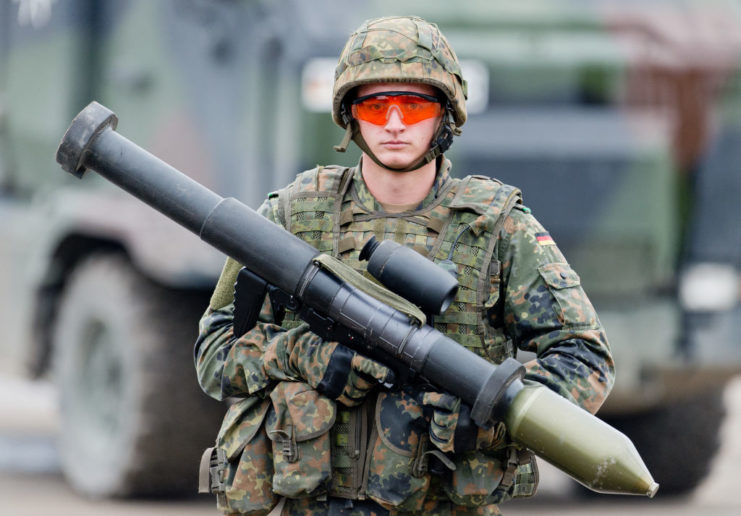 After its development during the Cold War, the PzF 3 continued to see service, with armies using it during the Iraqi Civil War, the War in Afghanistan, the Syrian Civil War, and, most recently, the Russo-Ukrainian War. As of 2022, the German government had authorized the Netherlands to supply the Ukrainian military with the weapon.