James Brown’s Death: Was the ‘Godfather of Soul’ Murdered?

On Christmas Day, 2006, the 73-year-old “Godfather of Soul” James Brown – suffering from heart failure – quietly stuttered “I’m going away tonight” and then took three long breaths before his heart stopped. Only Brown’s manager Charles Bobbit was in the room when Brown died. While an outpouring of fans gathered to mourn the loss of one of music’s biggest icons, others began to speculate what really went down in that hospital room the night of James Brown’s death.

The Godfather of Soul

James Joseph Brown was born on May 3, 1933, in a tiny shack in the woods of Barnwell, South Carolina. When Brown was only four years old, he was sent to live in Georgia with his Aunt Honey, the madam of a brothel. 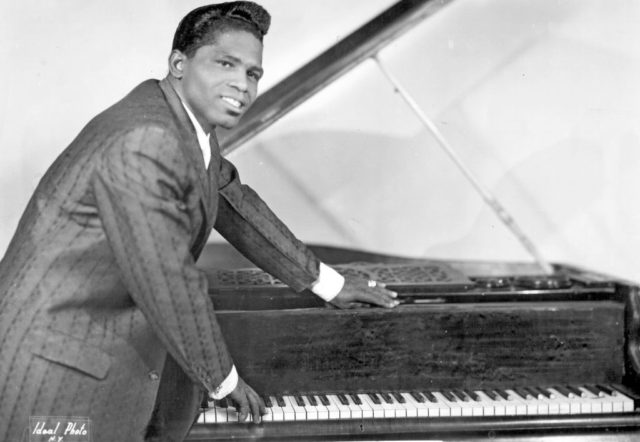 “Godfather of Soul” James Brown poses for a portrait at a piano, circa 1956. (Photo Credit: Michael Ochs Archives / Getty Images)

Growing up during the Great Depression, Brown learned to be resourceful and found odd jobs wherever he could. He picked cotton, washed cars, shined shoes, and even danced for soldiers at a nearby military base. Between his various odd jobs, Brown found his passion in religion and music. Singing in a local church choir helped Brown to develop his signature, soulful sound. Brown once shared how his childhood pushed him to pursue his dream:

“I was nine years old before I got a pair of underwear from a real store; all my clothes were made from sacks and things like that. But I knew I had to make it. I had the determination to go on, and my determination was to be somebody.”

Unfortunately, Brown also dabbled in crime as a teen. He was arrested for stealing a car and sentenced to three years in prison at only 16 years old. While in prison, he started a gospel choir and formed a lifelong friendship with aspiring R&B singer and fellow inmate Bobby Byrd.

In 1955, Byrd invited Brown to join his R&B group The Gospel Starlighters. Brown quickly grew to be the group’s lead singer, and they eventually renamed the band the Famous Flames and began performing in local nightclubs throughout Georgia. Their first major hit, “Please, Please, Please” launched Brown’s career and caught the attention of talent scout Ralph Bass. Within months, “Please, Please, Please” reached number six on the R&B charts and the Flames went on tour opening for huge acts like B.B. King and Ray Charles. 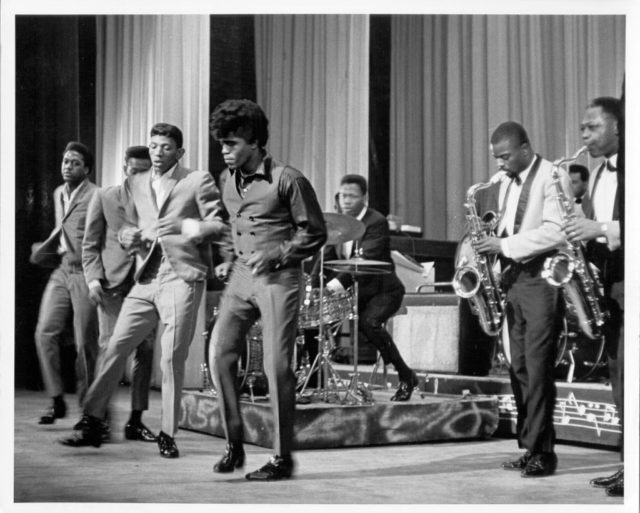 When the success of their first single dwindled, Brown moved to New York and recorded new songs including “Try Me.” The song skyrocketed Brown into the spotlight, reaching number one on the R&B charts and earning a spot on the Hot 100 Singles chart. Brown began touring around the country and rarely took breaks, earning the title of “The Hardest-Working Man in Show Business.” His saxophonist, Pee Wee Ellis, once said, “When you heard James Brown was coming to town, you stopped what you were doing and started saving your money.”

By the 1980s, Brown’s success had taken its toll on his personal life. He continued to perform and appear in films, but he also slid into a spiral of depression and drug addiction. Brown heavily abused cocaine and PCP for most of his career, which partly contributed to his fatal heart condition.

Did someone murder James Brown?

On December 23, 2006, Brown arrived at his dentist’s office in Georgia several hours late for a dental implant appointment. His dentist noticed Brown looked very ill, “weak and dazed.” The next day, Brown went to the hospital and was admitted for treatment. His condition worsened throughout the day until he was pronounced dead in the early hours of December 25. His official cause of death was listed as congestive heart failure related to pneumonia, but some close to the soul singer think foul play could be involved. 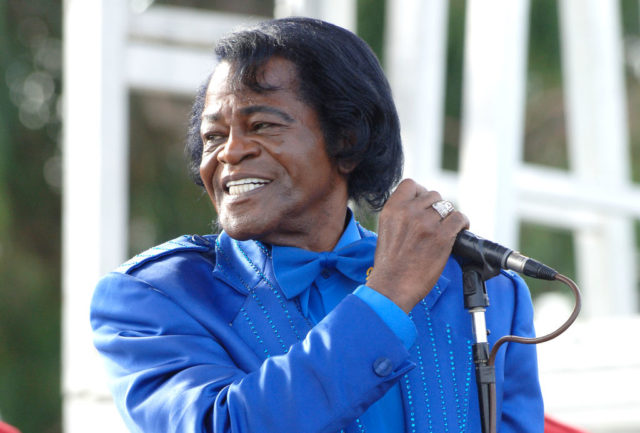 “He was a patient I would never have predicted would have coded. … But he died that night, and I did raise that question: What went wrong in that room?” said Dr. Crawford, the physician who signed Brown’s death certificate.

According to Crawford, Brown was given oxygen, IV diuretics, and ACE inhibitors when he arrived at the hospital. The doctor said Brown improved quickly and “probably could have walked out of the hospital if he wanted.” The doctor left the hospital to spend the holiday with his family when he got the call that Brown’s heart had stopped. 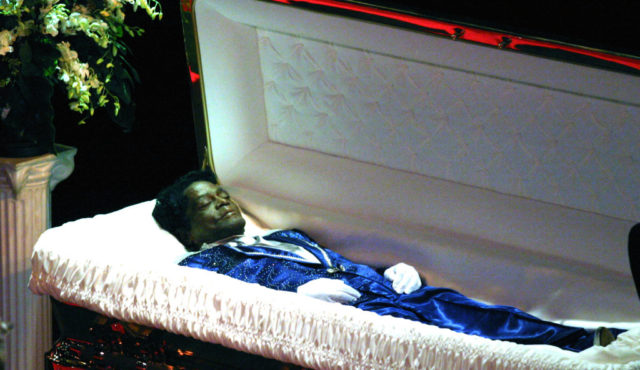 Thomas Lake, an investigative reporter with CNN, spent two years interviewing numerous people who believe that James Brown was murdered. Brown’s friend Andre Moses White claimed that Brown was left alone in the hospital room for a period, during which time a nurse recounted the singer was visited by a male stranger. White recalled that after the visit from the stranger, Brown’s vital signs began to plummet.

White also claimed that the same nurse pointed out what looked like drug residue in Brown’s endotracheal tube. The nurse drew a vial of blood for White to have tested, but Dr. Crawford believes that Brown willingly took illegal drugs (cocaine was already present in his urine when he arrived at the hospital) which caused an accidental overdose.

Brown’s death seemed to follow a familiar pattern, in that it was similar to the death of his ex-wife Adrienne in 1996. Adrienne had accused the singer of domestic abuse, even contacting her attorney saying she was scared for her life just days before her death. The Brown family explained the death occurred due to complications from cosmetic surgery, but a retired police detective claimed to have discovered a notebook written by a doctor who confessed to murdering Brown’s ex using a drug overdose to make it look like an accident. 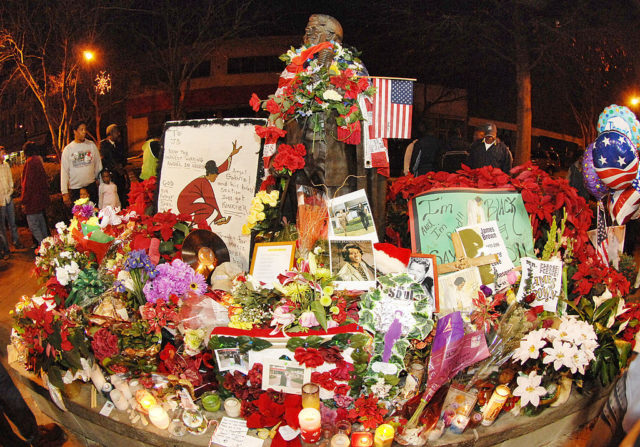 Controversy still swirls around Brown’s death – even the location of his body is uncertain. Buried 66 days after his death while his coffin sat in cold storage in a funeral home, James Brown’s final resting place is said to be in a crypt in his daughter Deanna Brown Thomas’ yard in South Carolina. However, Brown’s other daughter LaRhonda claims he isn’t there. The family was embroiled in a 15-year battle over the late singer’s estate, which was just settled in July of 2021.

More from us: Sam Cooke’s Death: Was it Really a Justifiable Homicide?

It appears that the police have yet to test the vial of Brown’s blood collected by White, and with no autopsy report it is likely the mystery surrounding the death of the Godfather of Soul will remain unsolved. His soulful legacy lives on in his celebrated music.

« Here’s What 7 People From the Original ‘Hocus Pocus’ Look Like Today
Blue Lobster: A One-In-Two-Million Catch »