Mister Rogers’ Neighborhood is one of the best-known North American children’s shows of all time, with an impressive 31 seasons produced. It’s praised for its handling of difficult or complex topics throughout its run, such as death, divorce, and racism. The show’s star, of course, is Mr. Rogers himself, with his kind face, calm demeanor, and colorful cardigans. It is because of these same traits that Fred Rogers’ military career is a source of great speculation.

Did he serve, or didn’t he? Rumors have flown for years that his past is not reflective of the man who dedicated his life to children’s education and entertainment. Here is the truth about Rogers’  supposed service as either a US Navy SEAL or a sniper.

Fred McFeely Rogers was born in Latrobe, Pennsylvania on March 20, 1928. He earned his bachelor’s degree in music from Rollins College in 1951 and soon began working in children’s programming with WQED in Pittsburgh. In 1962, Rogers earned a second bachelor’s degree, this time in divinity, from Pittsburgh Theological Seminary. 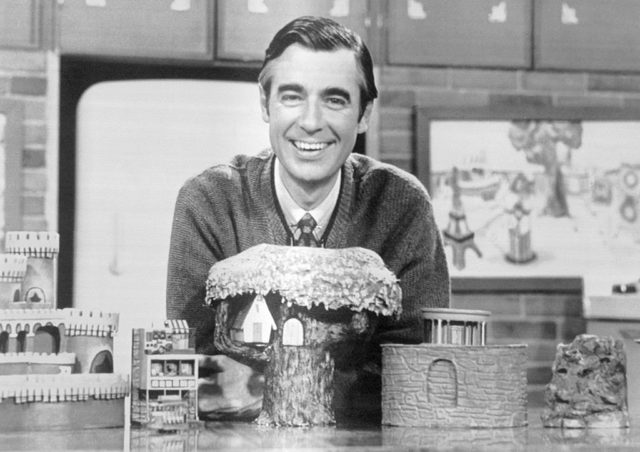 He began working as a Presbyterian minister in 1963, before attending the University of Pittsburgh’s Graduate School of Child Development. This was the part of his education that would set the tone for the rest of his career, and it was during this time that he established a long-lasting relationship with Margaret McFarland, a well-known child psychologist. Because of his degrees, he was asked by the Canadian Broadcasting Corporation to develop a children’s show.

In Canada, he created the black-and-white program Misterogers which first aired in 1963. The head of CBC’s children’s programming was impressed with Rogers’ ability to interact with children and insisted that he appear on camera for the show. In 1967, Rogers acquired the rights to the show and moved back to Pittsburgh with his wife Joanne and their two young sons.

He reformatted the program and it became Mister Rogers’ Neighborhood, which debuted in the US in 1968 and ran until 2001. Rogers’ work on the show was highly acclaimed, largely because of the heavy emphasis that he put on children’s emotional concerns. 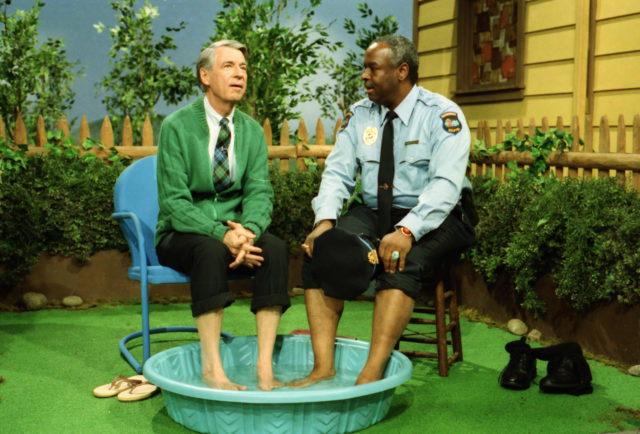 Rogers was given the Presidential Medal of Freedom in 2002, just one year before he died of stomach cancer. He also received a Lifetime Achievement Emmy in 1997 for his work. Throughout his life, he was bestowed with more than 40 honorary degrees and awards, a truly impressive feat. Apart from his work on Mister Rogers’ Neighborhood, however, there are some who praise him for his military service.

There was something else going on in the world when Mister Rogers’ Neighborhood debuted in 1968: the Vietnam War, which officially occurred between 1955 and 1975. Somewhere over the years, Rogers became the source of many rumors about his time served during this conflict, many of which seem quite far-fetched. Some of these stories insinuate that Rogers served as a sniper in Vietnam, while others say he was a Navy SEAL. 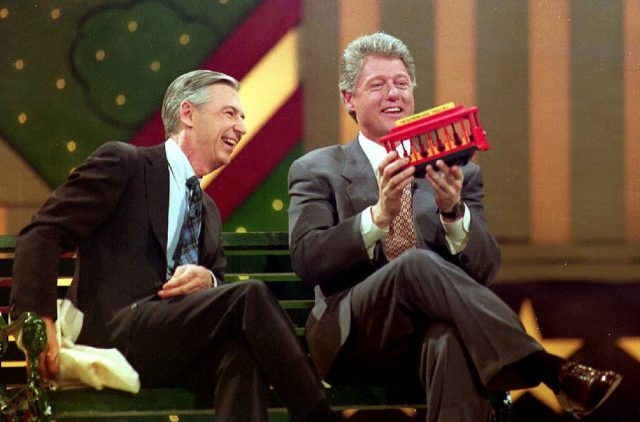 To make the rumors even more dramatic, the man who was a vegetarian because he didn’t “want to eat anything that has a mother” allegedly had his arms covered with tattoos, one to commemorate each of his kills overseas. Some believe this is the reason he wore all those classic cardigan sweaters on Mister Rogers’ Neighborhood – to cover up full tattoo sleeves commemorating all of his supposed kills.

On the other side of the debate are those that don’t believe that Rogers ever served in the military. According to the American National Archives and Records Administration, which holds Rogers’ draft cards and his selective service records, he never served in any form of armed service. 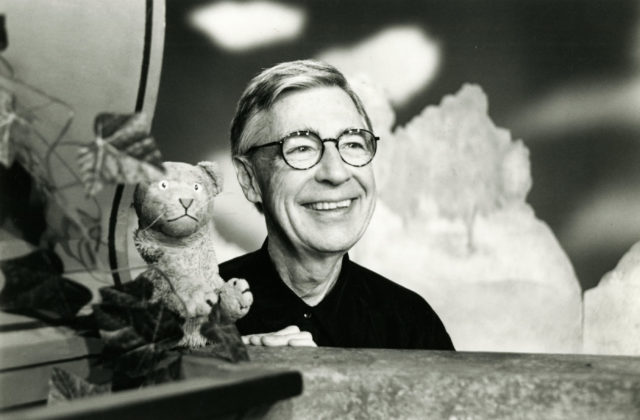 The National Archives has the draft card that Rogers filled out in 1948 when he was 20. Initially, he was given the classification of “1A,” meaning that he could serve in the military. However, after completing a physical examination for the Armed Forces on October 12, 1950, this status was changed to reflect that he was unqualified for military service. He therefore couldn’t, and wouldn’t, have been called for service in Vietnam.

Why are there rumors?

While it adds a layer of mystique to think about this calm kid’s show host as having a secret early life as a sniper, it’s very unlikely based on the information available that he really did serve overseas and that it was then covered up. In fact, rumors about Fred Rogers’ military career are almost entirely founded on the fact that he could be hiding something unexpected, like tattoos, under his cardigan sweaters. 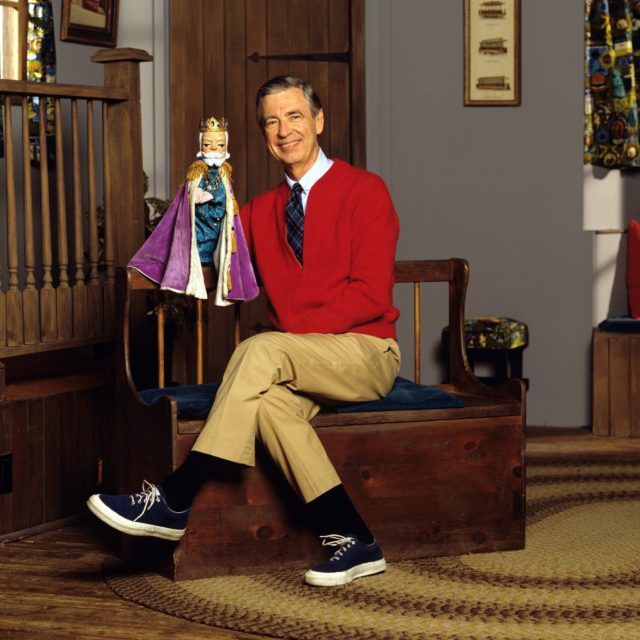 According to Trevor J. Blank, an assistant professor at the State University of New York at Potsdam who studies urban legends, “[Rogers] having a very macho back story or being a ruthless killer is kind of titillating; it runs counter to what you’re presented as true in your day-to-day experience.” Despite what many people want to believe, Fred Rogers never served with any branch of the Armed Forces.

The rumors about this supposed killer fall apart during a review of his show’s timeline. Rogers never took breaks from filming the show that would have allowed him to go overseas to Vietnam. His Between school, work, and working as a minister, his time is accounted for during earlier conflicts as well. As for being a Navy SEAL, the force wasn’t founded until 1962, while Rogers was already working these jobs. If that fact isn’t convincing enough, Rogers’ colorblindness would have prevented him from becoming a SEAL. 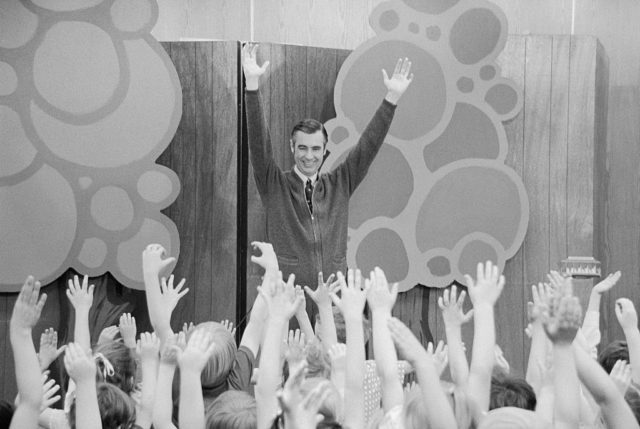 Despite our confirmation that Mr. Rogers didn’t serve in the military, there was actually a US Marine named Fred Rogers who served as a sharpshooter in the Vietnam War, but it certainly wasn’t our beloved television star. The more famous Fred Rogers would have been too old to fight by the time the US sent ground troops into Vietnam in 1965.

More from us: Won’t You Be My Soviet Neighbor? Mr. Rogers’ Bizarre Appearance on Russian Television

Throughout his time on Mister Rogers’ Neighborhood, Fred Rogers emphasized to his viewers that he was a strong believer in pacifism. He even went so far as to bring his opposition to Vietnam onto the show via a puppet show about resisting fighting. “Isn’t peace wonderful?,” he asked to those watching from home.