There is no image that screams ‘Halloween’ so clearly as a green-faced witch and her familiar, riding a flying broom through the night sky. Most witches in popular media are depicted this way, but why? The association between witches and broomsticks is an old one dating back as early as 1451. The reason witches have become associated with brooms is quite unexpected.

The first images of women riding brooms came from a French manuscript called Le Champion des Dames, written by poet Martin Le Franc. The images are associated with a poem about virtuous womanhood that features a passage on dealing with witchcraft. In the images, one of the women flies on a white stick while the other rides on a broom, and they both wear headscarves. 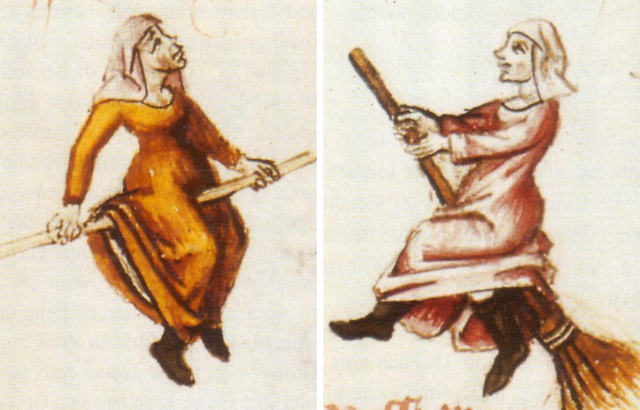 The head coverings indicate that the women were from a Christian sect called Waldensians that allowed women to become priests and even perform the sacrament. This concept was horrifying to the Catholic Church, which in turn labeled Waldensian women as “witches.”

This early image clearly shows a close association between witches and brooms, but what’s the reason for the connection? There are two predominant theories: the brooms were part of a pagan ritual or were used to apply special ointments to their bodies.

Why do they ride brooms?

The first theory was put forward by Robin Skelton, an anthropologist, in her book The Practice of Witchcraft Today: An Introduction to Beliefs and Rituals. She proposed that the association between witches and brooms may be rooted in a pagan fertility ritual. To encourage good crop growth, farmers would leap and dance while straddling brooms (or other tools) under the light of the full moon. 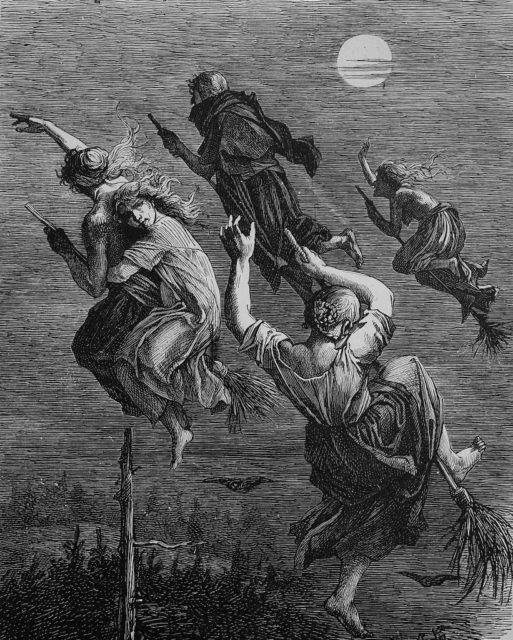 Witches ride on their brooms through the night, drawn in the 1890s. (Photo Credit: Bildagentur-online/ Universal Images Group/ Getty Images)

Part of the ritual required those participating to jump in the air, as high as they possibly could, as an indicator of how high they wanted their crops to grow that coming season. Skelton concludes that perhaps it was this ritual that became associated with witches flying through the night on their brooms.

An alternate theory arose from the many historical reports of “witches” creating ointments that they would rub on their bodies to give themselves special powers, such as the ability to fly. It’s believed that these concoctions were made from plants such as deadly nightshade, henbane, and mandrake – which were all hallucinogens that could cause unpleasant side effects. To avoid unwanted reactions but still experience hallucinations, the women applied their ointments topically. 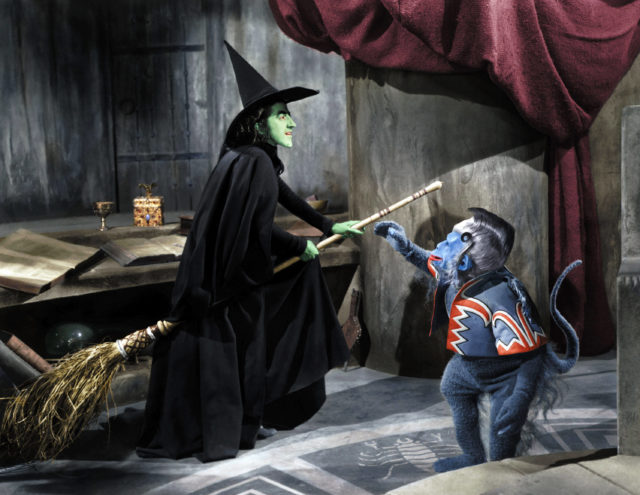 Publicity still of Margaret Hamilton as the Wicked Witch of the West from The Wizard of Oz, one of the witches associated with flying on a broom. (Photo Credit: Timothy2/ Warner Brothers, and Metro-Goldwyn-Mayer/ MovieStillsDB)

This is where the broom comes into the picture. It’s believed that the women would put their creams on a broom or staff and then straddle it naked to reach certain mucus membranes. This theory accounts for the legend of witches riding brooms. The hallucinogenic experiences might also explain the flying part of the legend, since the dreams witches had once they were under the influence often included flying.

More from us: Historical (And Hysterical) Ways To Spot A Witch

Of course, it’s impossible to pinpoint exactly where the legend of witches and broomsticks came from, but these are the most popular theories. Regardless, the idea has been perpetuated in pop culture, where witches are often seen riding broomsticks in everything from The Wizard of Oz to Hocus Pocus.