Wonders of God: The Bizarre History of Victorian Fasting Girls

In the mid-19th century Welsh countryside, a ten-year-old girl became the center of a national phenomenon that would divide families, communities, and even science itself. Her story is one of many known as “fasting girls,” young women who could survive eating no food at all and seemed to live on nothing but air.

Who were the fasting girls?

Sarah Jacob fell mysteriously ill in February 1867, several months before her tenth birthday. After suffering from seizures and laying unconscious for a month, Jacob was confined to her bed. By October, she had recovered but did not eat or drink, and her parents vowed not to force her to eat. 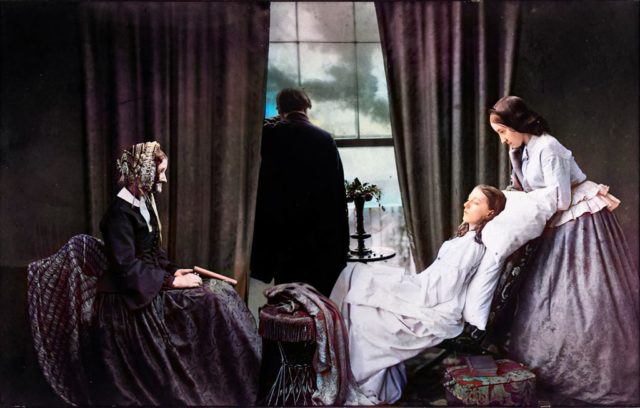 Jacob was one of several “fasting girls” who captivated the public during the Victorian period with their strange ability to live with no food for prolonged periods of time. The girls were often called “wonders of God” and were considered to be incredibly pious and devout in their faith. They were seen as so miraculous that people came from all over to visit them and shower them with gifts in the hopes that they would also be blessed by the girls’ religious power.

The fasting girls of the Victorian period are not the first “wonders of God” to survive without food for months on end. The first miraculous fasters date back to the 1600s when nuns and religious women practiced self-starvation as a way to imitate the suffering Jesus Christ endured prior to his crucifixion. The condition became known as anorexia mirabilis, something several female saints endured during the Middle Ages. 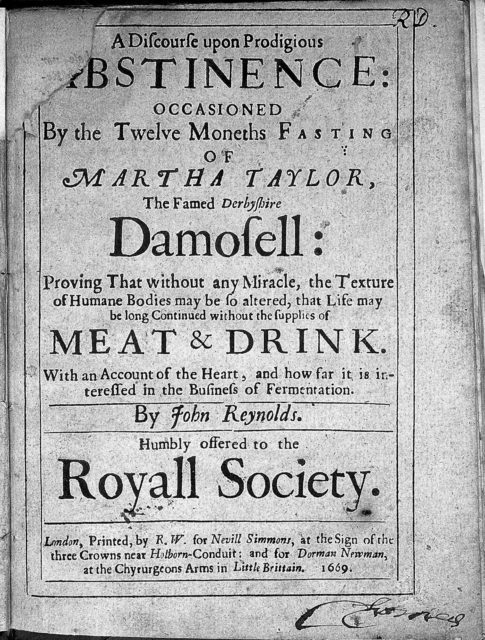 In 1600, King Henry IV of France sent his best physician to watch Jane Balan, who had fasted for three years. In 1668, the Earl of Devonshire also arranged a watch over Martha Taylor, the “Famed Derbyshire Damosell” who claimed to have fasted for 12 months with only the occasional feather dipped in water to wet her lips.

Several hundred years passed between the self-starving women of the Middle Ages and the Victorian fasting girls, so what happened to resurrect the practice decades later?

Sarah Jacob’s family kept her strange condition to themselves, but soon locals who had heard of Sarah’s story flocked to the Jacob family farm with donations and presents to give the miraculous girl. Sarah Jacob became a national story when a local vicar named Evan Jones published a letter in the Welshman in February 1869 about the young girl who had not eaten a speck of food since October 1867. 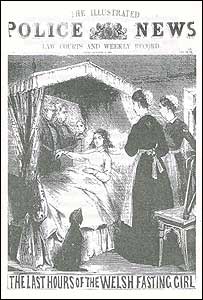 Strangers traveled to the Jacobs farm to bear witness to the remarkable girl. They hoped to have their prayers answered by exposing themselves to the mysterious holy power behind Sarah’s survival. Jones, on the other hand, was skeptical and called four doctors to come to Wales and investigate the phenomenon.

In March 1869, with the permission of the Jacobs family, four “watchers” were hired to watch the fasting girl day and night for two weeks. What they witnessed as the days went on was the slowly deteriorating condition of Sarah Jacob as she starved to death. Around this time, the experience of starving to death was sadly not uncommon as famine gripped the United Kingdom.

The Irish Potato Famine killed one million people between 1845 to 1852 and its effects were felt for years afterward, and many people – including those who made their pilgrimage to Sarah’s bedside – were no strangers to the horrific death that comes from starvation. For many who saw the fasting girl, it was the first time they had ever seen someone not only survive with no food but seemingly lead a normal life – all while subsisting on air and God’s mercy.

The Great Potato Famine: A family at the ruins of their house in Killarney, 1888. (Photo Credit: Fine Art Images / Heritage Images / Getty Images)

After two years without food, Sarah’s health began to decline. Even as physicians and watchers begged Sarah’s parents to force her to eat something, they refused. Sarah Jacob died from starvation a few days later. Her parents were both convicted of manslaughter. Only after her death did the watchers realize that Jacob was surviving by eating a small amount of food in secret, but once the 24-hour-a-day watch began she could no longer feed herself.

Sarah Jacob wasn’t the only fasting girl to gain national attention in the Victorian period, but she was one of the most famous and most convincing. Ann Moore came to be known as the “pretended fasting woman of Tutbury” when it was discovered that she had been lying about her six years of fasting. 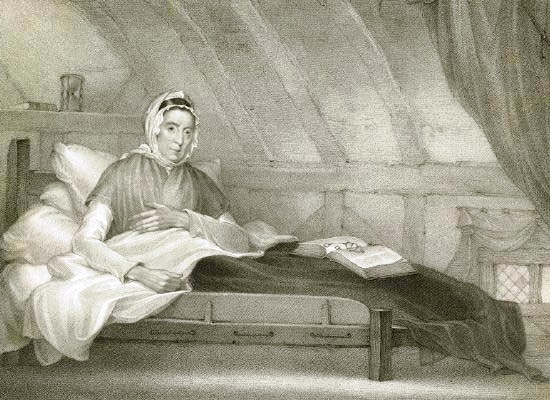 After a watch in 1813, it was discovered that Ann’s fasting – which had made upwards of £400 by charging the visitors who stopped to see her – was a hoax. She had her daughter secretly feed her by washing her face with towels dampened with gravy, milk, or arrowroot, and by passing food into her mother’s mouth when they kissed. Moore was dubbed a “vile imposter” and the scandal only furthered the popularity of the dangerous trend of fasting girls.

Fasting girls also appeared outside of the United Kingdom. Sixteen-year-old Mollie Fancher became known as the “Brooklyn Enigma” and made national news when she marked seven weeks without food in 1866. Two years prior, Mollie suffered a life-changing injury when she was thrown off a horse and hit her head on the pavement. Only a year later, her dress was caught on a trolley car which dragged the girl for a block. After the two horrific accidents, Mollie began to suffer from fainting spells, headaches, and even the loss of her sense of touch, taste, sight, and smell.

By the 1870s, Fancher and her parents claimed she had extrasensory abilities and was subsisting on a very small amount of food every six months, but she consistently refused to take part in a watch.

Mollie became somewhat of a celebrity, receiving endorsement deals and letters from President Woodrow Wilson. She was even offered a chance to join PT Barnum’s circus! Soon, other fasting girls appeared throughout the United States, especially in areas where religion still played a large role in daily life.

Is society to blame?

Netflix recently explored the fascinating history of fasting girls with The Wonder, a 2022 film adaptation of the 2016 book of the same name by Emma Donoghue. The story follows English nurse Lib Wright (Florence Pugh) as she is asked to perform a watch over an Irish girl who hasn’t eaten for months. As the girl’s condition worsens, Wright is forced to uncover why she refuses to eat. In the process, she discovers a dark family secret. 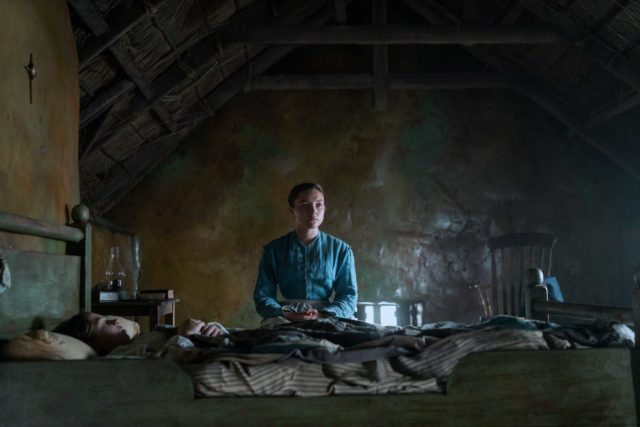 After over 100 years, no one is exactly sure how the 19th-century fasting girls phenomenon came to spread as far as it did, nor do we know why Sarah Jacob, Mollie Fancher, and others suddenly started to refuse food. Some physicians insisted the fasting was brought on by hysteria, while others like Dr. Fowler thought that the fasting was inadvertently encouraged by the girl’s parents’ “oft expressed wonderment” reactions to how little food Jacob and Fancher ate while recovering from illness. As the fasting continued and their fame grew, the need to feed into the “simulation and deception” of fasting only increased.

More from us: Fooled You: 6 Of History’s Greatest Hoaxes

Emerging ideals about femininity, eating, and appearance were also becoming more prominent in the Victorian era, potentially explaining the start of disordered eating habits like those of the fasting girls.

« Inside Skull and Bones, One of America’s Most Mysterious Secret Societies
These Celebrities Died in 2022 and No One Noticed »