Judas Cradle: One of the Most Painful Torture Devices in History

The Judas Cradle, also known as the Judas Chair or the Guided Cradle, was a torture device that was most commonly used during the Medieval period. It took advantage of the forces of gravity to torture its victims in the most delicate of places and was an effective and popular method for acquiring confessions and other information. The device got its name by providing the kind of punishment that would suit only the world’s most famous traitor – Judas.

Structure and operation of the Judas Cradle 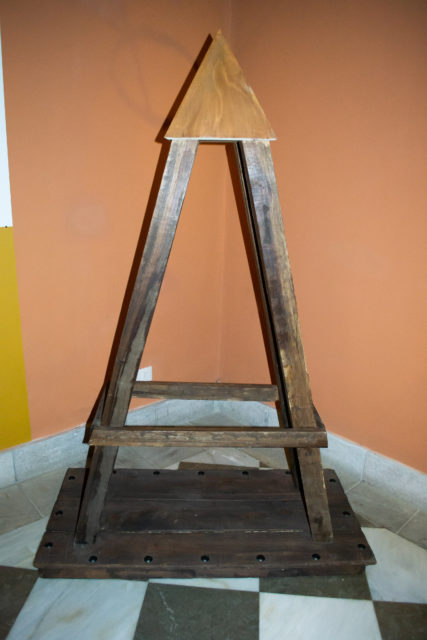 The Judas Cradle was made several ways but was always in the shape of a pyramid with a pointed spike at its tip. (Photo Credit: Jerónimo Roure Pérez / Wikimedia Commons CC BY-SA 4.0)

The Judas Cradle was a heavy, pyramid-shaped device made of wood. The main part consisted of a wooden stake that pointed upward, capped with a sharp pointed tip. This was supported, typically on four sides, by wooden beams to help keep the main stake in its upright position even with the added weight of the victim when the device was in use.

Before being tortured, the victim would have their hands and feet tied together so that they were unable to shift their weight easily. Then, using a series of ropes and pulleys, the torturers would lower the victim down onto the Judas Cradle. The victim was strategically placed over the device so that when they were lowered, their most delicate parts would be in direct contact with the pointed tip of the stake.

With the force of gravity, the pointed tip would apply consistent pressure to the victim’s private area, and they would only make the pain worse by trying to move their rope-bound feet. The victim would be forced to sit upon the Judas Cradle for anywhere between a couple of hours to a couple of days, depending on their pain tolerance. Unless they confessed to whatever they were being tortured for early on, they would endure great suffering.

The Judas Cradle was popular during the Spanish Inquisition

Despite there being evidence that the Judas Cradle existed and was used in carnival sideshows before the 16th century, the torture device is most often associated with the Spanish Inquisition. It was an Italian invention created by Ippolito Marsilli, a lawyer who also documented various torture methods. It was in Spain that it gained widespread popularity and use.

During the Inquisition, the Judas Cradle was mainly used for religious purposes as a means to deal with heretics. It was one of many methods employed to gain a confession from the victim, but people found a use for it beyond the realm of religion. As religion and politics were heavily intertwined during the Medieval Period, the methods used to consolidate the power of the monarchy heavily overlapped with religious methods of torture. The Judas Cradle was not just used on heretics – it was also used on political opponents.

The Judas Cradle was operated by torturers who were hired by the church or private employer to source a confession or other information from their victim. These people were provided a hefty sum of money for their services. Most often, multiple people operated a Judas Cradle. One would be in charge of the torture while the other would be there to assist.

Different methods were used to make the torture even worse 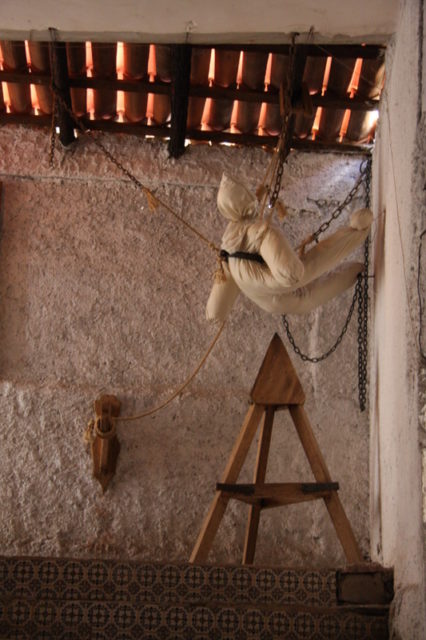 A series of ropes and pulleys would dangle a victim over the Judas Cradle until they were eventually lowered onto it, beginning the torture process. (Photo Credit: Scott Clark / Wikimedia Commons CC BY 2.0)

As if having a pointed stake shoved through one’s privates wasn’t bad enough, victims who refused to confess or provide information were subject to even more pain through additional measures. Adding more torture to an already painful device was not difficult, and the Judas Cradle allowed for multiple methods to increase pain.

One of the easiest, most efficient, and most popular ways for torturers to increase the pain inflicted on their victims was to add weights to the victim’s legs. By doing so, they increased the effects of gravity, shoving the tip of the stake further into the victim’s private area. However, with this method came a downside for torturers – by weighing the victim down, they also increased the chances of a quicker death. If they were not careful, they would kill the victim before they were able to acquire the confession they’d been paid to retrieve.

Another method of increasing pain was to oil the sharp pointed tip before lowering the victim down onto Judas Cradle. This made it easier for the tip to enter the victim with less resistance. Torturers would also push down on the victim when the tip was oiled to cause intense bursts of pain. Again, torturers had to be careful not to employ this method too liberally, as they could kill the victim too soon.

The most effective method torturers used to prolong a victim’s time with the Judas Cradle was to temporarily raise them off of the main stake. They would pull at the ropes in order to provide the victim with a short break from the pain. This is not to be mistaken for an act of mercy. In fact, it was quite the opposite. Raising the victim made them question whether they could handle more time on the Judas Cradle and reminded them what it was like to be free of excruciating pain. It also granted the torturers more time to force a confession out of the victim.

In some cases, it wasn’t the Judas Cradle that killed the victim 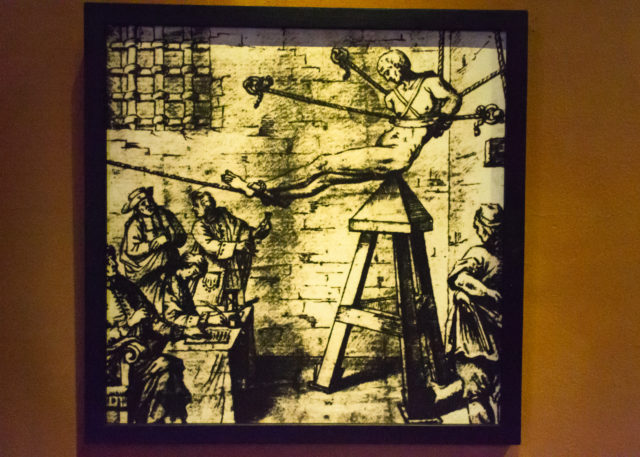 The Judas Cradle was dangerous in more ways than one, causing death through penetration or through infection. (Photo Credit: Jerónimo Roure Pérez / Wikimedia Commons CC BY-SA 4.0)

As you can imagine, the Judas Cradle was the cause of many victims’ deaths. Those who did survive the initial torture phase were at risk of dying later.

Sanitary conditions were poor during the Medieval Period, so it should come as no surprise that the tip of the Judas Cradle was not washed between victims. Whatever bodily fluids dripped onto the tip from the previous victim were left there for the next. As a result, victims who were subject to the Judas Cradle were likely to face infection even if they somehow managed to survive the torture.

More from us: The Gibbet Punished Criminals Even After Death

One way or another, the Judas Cradle would eventually kill its victims.