The feathered serpent god of the ancient Maya world known as Kukulkan was once a revered presence in Mesoamerica until Spanish conquistadors arrived. They left the Maya people and all their deities in ruins. Kukulkan is said to guard the historic city of Chichen Itza, where a large temple was built in his honor. Today, the fearsome creator god continues to be an important symbol of Mexican indigenous culture and heritage.

The ancient world of the Maya

The Yucatec Maya were one of the most advanced societies of the ancient world. The first Maya people were hunter-gatherers who arrived in the Yucatán area of Mexico around 2500 BCE. The early Maya cultivated maize, or corn, which would become an essential part of their diet and daily life. Soon settlements could be seen scattered around the expansive cornfields and dense rainforests. Throughout their history, the Maya were known for their creative problem-solving and ingenuity. 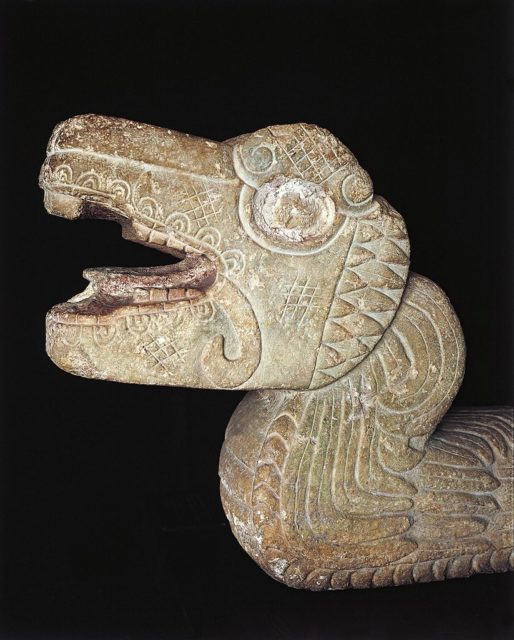 Between 300 and 900 CE the Maya built several grand cities, including what are now the iconic ruins of Chichen Itza and Uxmal which are still standing today. The Maya were skilled farmers and builders who designed entire aqueducts in the middle of the rainforest. In 300 BCE the Maya adopted a hierarchical system that was ruled by kings and nobles, allowing the Maya civilization to expand into highly structured kingdoms and societies that subsisted on farming.

Spirituality was one of the building blocks of Maya life, as proven by the overwhelming number of ceremonial sites built throughout the Maya world. In the city of Tikal, for example, over 10,000 individual structures were jammed into a six-square-mile area. These ranged from opulent temples to small huts. At one time Tikal boasted a population of 60,000, giving it an impressive population density much higher than cities in other parts of the globe during the same period. 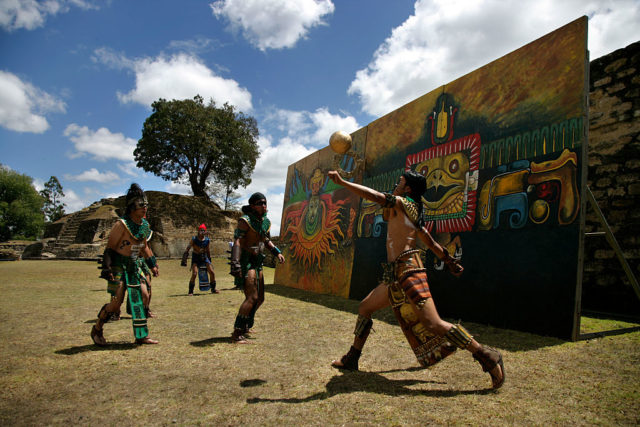 The Maya were also perfectionists when it came to building holy sites. Temples and palaces were torn down and rebuilt multiple times in a span of several centuries, and each temple was built in an intricate pyramid style from hand-cut limestone blocks.

While the Maya were an advanced civilization, they were not immune to disasters like drought and famine. As the population grew over time food shortages and malnutrition became major issues, forcing families and whole communities to pack up and move elsewhere. Maya life changed drastically in 987 CE when the Toltec people arrived from the north, claiming they had followed the god Quetzalcóatl. It was then that Quetzalcóatl – also known as Kukulkan – became a dominating presence in the lives of the Maya.

Kukulkan: the feathered snake god of life, rain, and storms

Kukulkan was the chief god of the Yucatán Maya. His name translates to feathered (k’uk’ul) and serpent (kan) which perfectly describes the diety. Kukulkan was known as the god of life, rain, wind, and storms and his serpent-like appearance signifies his connection to life both below and above earth. Because of Kukulkan’s serpent-like ability to move between worlds, historians believe he represented the connection between the gods and humanity. He is also credited with inventing some of the most fundamental fixtures of Maya society like the Maya calendar and maize. 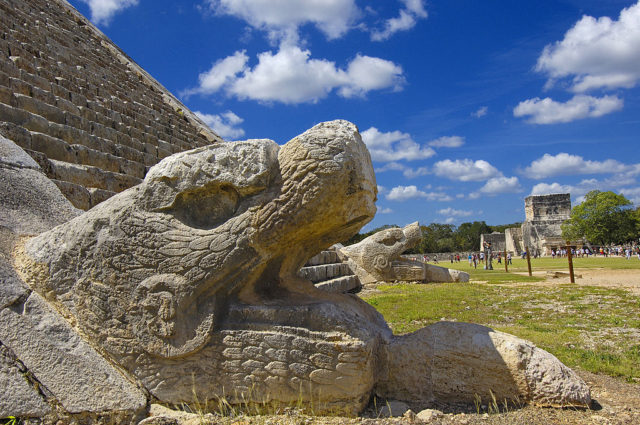 According to Toltec mythology, Kukulkan required the sacrifice of human hearts, which the Toltecs provided through mass human sacrifices. The influence of the Toltecs is most prominent in the ancient city of Chichen Itza, which is believed to be conquered by the Toltecs as they invaded neighboring civilizations. A massive temple dedicated to Kukulkan was erected in Chichen Itza, dubbed “El Castillo” or the Temple of Kukulkan, it is one of the most famous surviving temples of the Maya world. Carvings depicting the dragon-like face and feathered body of Kukulan can be seen throughout Maya architecture

Chichen Itza and the Temple of Kukulkan

The city of Chichen Itza is one most famous surviving Maya cities, drawing in two million visitors a year today. The affluent city thrived between 750 and 1200 CE and was likely the capital of the Maya world. The crown jewel of Chichen Itza El Castillo or the Temple of Kukulkan, a breathtaking step pyramid built from hand-carved limestone blocks over 1,000 years ago. The temple towers 78 feet over the ground and features architecture far more sophisticated than other cultures during the same period.

The four-sided pyramid includes a staircase on each side, the first three with 91 steps and the fourth with 92 steps – adding up to 365, or one step for each day of the year. At certain times of the year the temple comes to life with the spirit of the serpent god it is dedicated to. During the autumnal equinox, for example, a series of shadows are cast onto the sides of the north-facing staircase that gives the illusion of a giant snake climbing down from the temple. The platform at the very top of the pyramid was used for ceremonies dedicated to Kukulkan. These included human sacrifices which were necessary to ensure the continued prosperity of the Maya culture.

Even though effigies and carvings of Kukulkan have been preserved at Chichen Itza, not much is known about the serpent god and those who followed him. Once Spanish conquistadors and Catholic priests arrived in Mexico in the early 16th century, cultural items used in ceremonies were destroyed while immaterial items like mythologies, stories, and rituals died with the Maya who were forcibly assimilated into European culture or died as a result of colonialism. 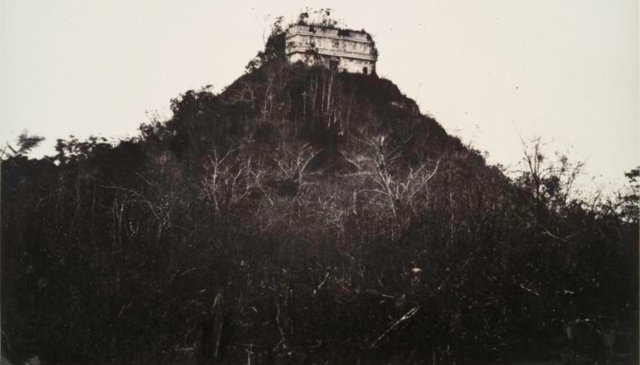 More from us: 10 Incredible Ancient World Discoveries That Have Us Rethinking History

Historians have been able to uncover more about Kukulkan by comparing the god to a similar Aztec deity Quetzalcoatl, who is also portrayed as a feathered serpent and mythical hero of the Aztec people. Like Kukulkan, Quetzalcoatl is a creator god with connections to rain, storms, and wind as well as learning and agriculture. Minor differences aside, many consider Quetzalcoatl and Kukulkan to be the same.