It might seem like the craziest idea in the world, but these five men really did volunteer to stand right beneath the explosion of an actual nuclear bomb. The sixth man, who filmed the whole thing, was not a volunteer, but the others all willingly signed up for the seemingly deadly escapade.

The incident occurred on July 19, 1957. Five Air Force officers and the photographer stood together on a little patch of desert some 65 miles outside of Las Vegas, Nevada.

They even had a little sign made up that simply read “Ground Zero – Population 5” and placed it in the ground beside them.

Up above, a pair of F-89 jets zoom past. One of them drops a nuclear missile, fully equipped with an atomic warhead capable of incredible destruction and devastation. 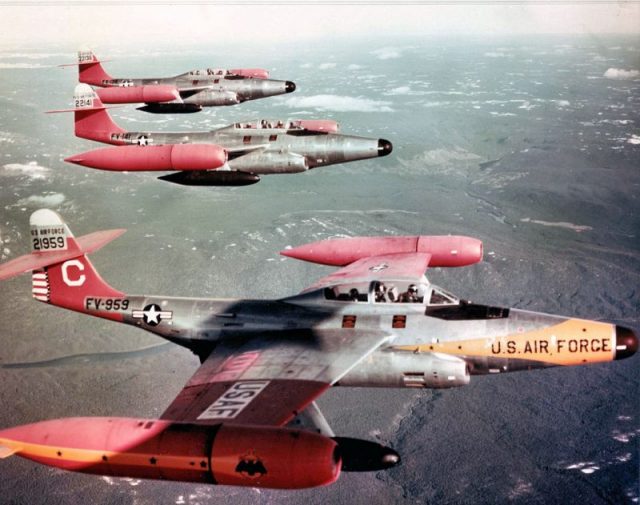 But the men below don’t seem phased. They simply wait and watch, while a countdown begins. Then, around 18,000 feet above them, the bomb explodes.

One of the men, wearing sunglasses to shield his eyes, stares up at the resulting explosion, marveling at the view. Meanwhile, a narrator describes the scene, excitedly reporting “The mounds are vibrating! It is tremendous!

Directly above our heads” and eventually stating “Wasn’t that a perfect, perfect shot?” as another of the men shares his regret that other people weren’t around to enjoy the experience for themselves.

The footage was taken for governmental archives and was recorded by the United States Air Force. The concept of the exercise was to try and show that when detonated very high in the air, low-grade nuclear explosions were not as dangerous or deadly as people may have feared.

This is partly why the men volunteered. They believed in the theory and wanted to be a part of the unique experiment for themselves. Two of them were colonels and two were majors. All five volunteered willingly. The camerman, named George Yoshitake, was not a volunteer but was simply doing his job.

The film gives us some interesting aspects to consider and analyze. For example, we can see the explosion of the bomb a long time before we actually hear the sound. This is because light travels far faster than sound. 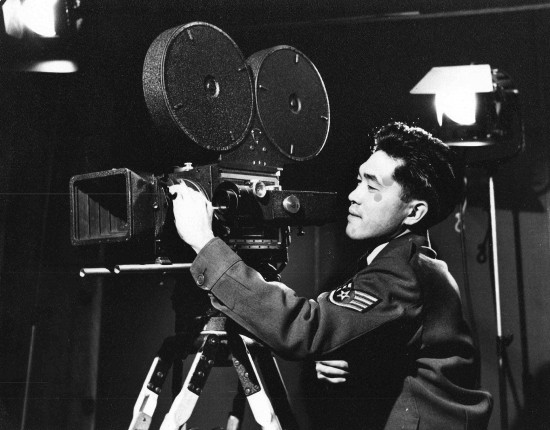 George Yoshitake belonged to a secret filmmaking unit that recorded atomic bomb and hydrogen bomb tests in Nevada and the Pacific.

However, the actual sound we hear may have been altered, at least according to one science historian named Alex Wellerstein.

Wellerstein allegedly found an unaltered bomb test recording, which he shared on Restricted Data: The Nuclear Secrecy Blog. He claimed that the footage had been sourced from a Russian correspondent who located it in the US National Archives. The footage was from 1953 and depicts a “long, thundering growl” rather than a simple bang. 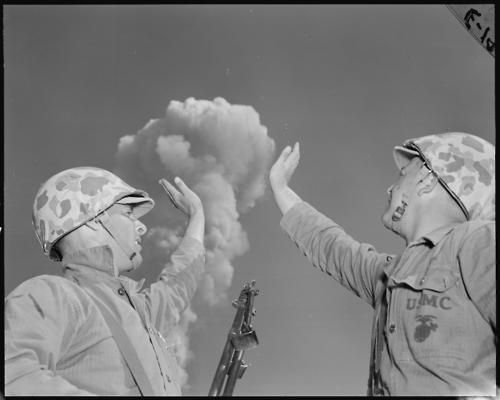 “U.S. soldiers pretending to touch a mushroom cloud created by a nuclear explosion in the Nevada desert, May 1952”

So what actually happened to the men involved in the video? Well, the individuals were named as Col. Sidney Bruce, Lt. Col. Frank P. Ball, Major Norman “Bodie” Bodinger, Major John Hughes, Don Lutrel and George Yoshitake. We see all of the men, aside from Yoshitake, in the clip.

No information can be found regarding Yoshitake and Major Norman Bodinger, but the recording is very old so these two men are either extremely elderly or similarly deceased.

As previously stated, the idea behind this bomb test, and several other bomb tests that occurred back then, was to show to the American public that atomic bombs could be relatively safe when handled responsibly. However, in the ensuing years, the government has had to pay over $800 million in compensation for illnesses linked to bomb tests, proving that these tests weren’t anywhere near as safe as originally believed.