For some, Geronimo was a fearsome and legendary warrior. To others a sad symbol of Native American oppression. As ever with iconic figures like Geronimo, the truth is more complex. He came from a tribe yet stood out as a celebrity. However throughout his singular life, he never lost sight of where he belonged and fought in various ways to return to the land he loved.

This land includes No-Doyohn Canyon, by the Gila River. It was here Geronimo was born in 1829, though his given name was Goyathlay. This translates as “the one who yawns”! He was an Apache – of the Chiricahua band – and while the area was their spiritual home, it was also part of Mexico. Today it represents the line between New Mexico and Arizona.

When the Apache raided villages, it brought them into conflict with the Mexican government. This in turn led to a devastation for the young warrior. With a $200 bounty on tribal scalps, the feud intensified. One day Geronimo returned to camp and found his family done away with by Mexican troops – his wife Alope, his children and his mother had perished in an all-out assault on the community. 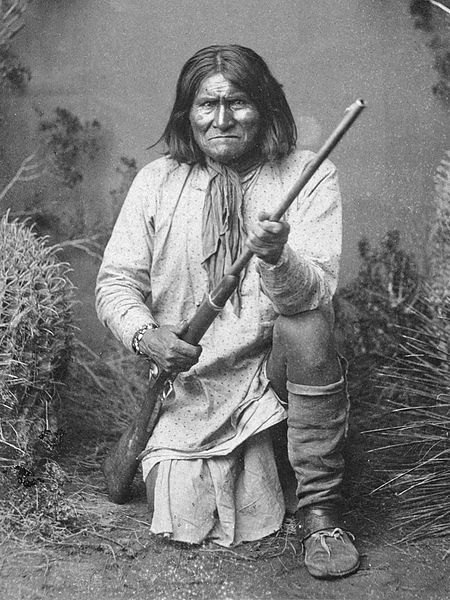 Geronimo hadn’t been stealing supplies – he’d been away trading with locals in the town of Kaskiyeh. Quoted in a Smithsonian Magazine article from 2012, he said about the aftermath, “I had no weapon, nor did I hardly wish to fight, neither did I contemplate recovering the bodies of my loved ones, for that was forbidden. I did not pray, nor did I resolve to do anything in particular, for I had no purpose left.” 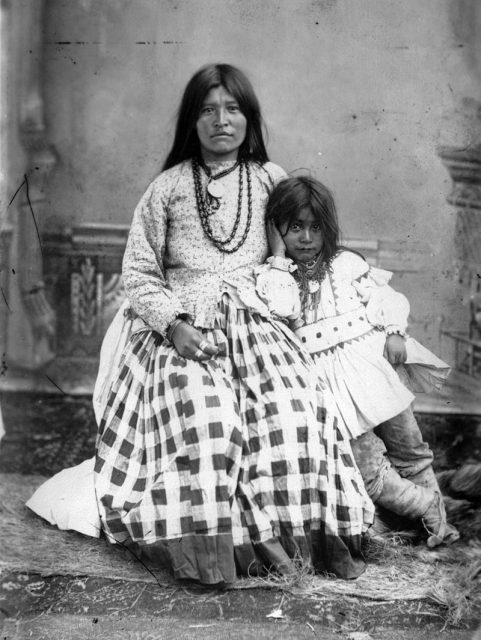 Ta-ayz-slath, wife of Geronimo, and child

His purpose was arguably ingrained in him. Then aged around 30, he’d been a warrior since he was 17. Geronimo soon pursued a vengeful reckoning against Mexican forces. Though he was born Goyathlay, he was to become known as the name he is remembered by, Geronimo. 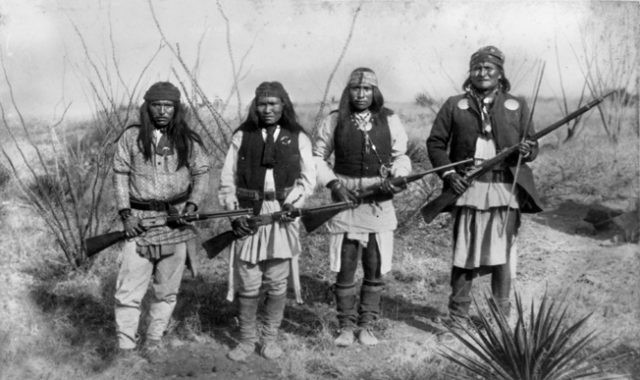 Apache warrior Geronimo (right) and his warriors from left to right: Yanozha (Geronimos´s brother-in-law), Chappo (Geronimo´s son of 2nd wife) and Fun (Yanozha´s half brother) in 1886

But where did the name come from? One particular explanation lies in the Spanish “Jeronimo”, meaning Saint Jerome. His enemies may have cried out for the Saint as the Native American legend swooped down upon them. Ultimately the origin isn’t known.

Geronimo’s fury at Mexico was soon to be interrupted by a new opponent. America as it’s recognized today was taking shape against a backdrop of cultural division. Land was being claimed and divided up, with no regard for indigenous peoples. Arrangements such as the Treaty of Guadalupe Hidalgo and the Gadsden Purchase, not to mention the Gold Rush, ushered modern America’s ancestors into the mix. 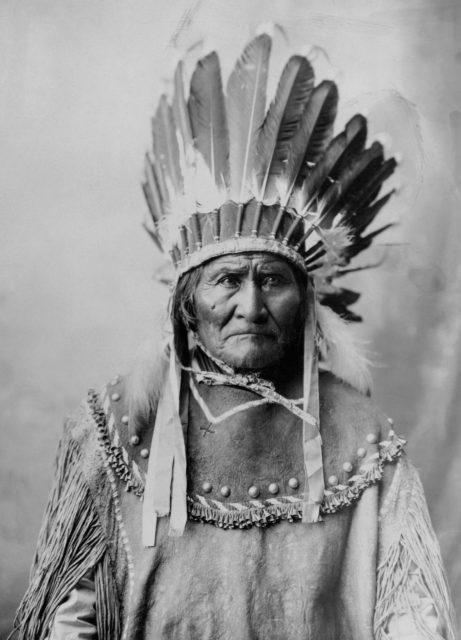 Geronimo (1829-1909), Apache chief who led opposition to the U.S. policy to relocate his people on reservations.

“The Anglo-American mines, ranches, and communities disrupted established Apache lifeways,” wrote History.com in 2009. “The intruders set limits on where the Apaches could live and how. The Apaches, of course, had other ideas.”

But in a relatively short space of time, settler authorities got the upper hand. Reservations were seen as a perfect solution for all but the Native Americans themselves. The Chiricahuas were originally going to live on a reservation which incorporated some of their land in 1872. They were unceremoniously marched off to the notorious San Carlos Reservation in Arizona just a few years later. The location had the nickname “Hell’s 40 Acres”. 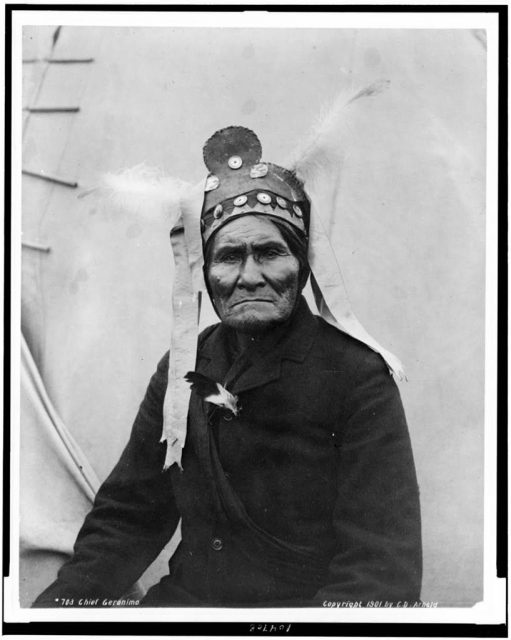 Geronimo wasn’t going to let the reservation hold him, leading no less than 3 escape attempts. “By the time of his final breakout in 1884,” History.com writes, “Geronimo had earned an unparalleled reputation for cunning, and stories of his ruthlessness—both real and imagined—were front-page news across the United States.”

If he was ruthless, then it wasn’t surprising. Geronimo had suffered heart-breaking betrayals on the path to freedom, both from his own people and those who wanted to capture him. His national status as one to be feared certainly endured. Things got so bad that, as written by Smithsonian, “tormented white settlers in the American West were known to frighten their misbehaving children with the threat that Geronimo would come for them.”

In 1886 he finally laid down his arms and surrendered, with a reported quarter of the American military might on his tail. This gave him the dubious distinction of being the last Native American leader taken by the US. From here, his life went in an unexpected direction. After many years as a thorn in the side of the establishment, he became part of it. 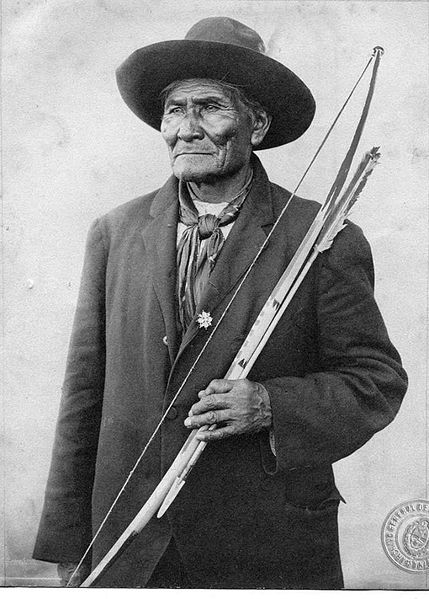 He was imprisoned at Fort Pickens in Florida, though his fame as a warrior resulted in a business proposition. Enterprising folk saw him as a money spinner, and so Geronimo entered a new phase as a tourist attraction.
History.com notes that “His captors also granted him permission to appear in occasional World Fairs and Wild West Shows, where he was often billed as the ‘Apache Terror’ and the ‘Tiger of the Human Race.’” 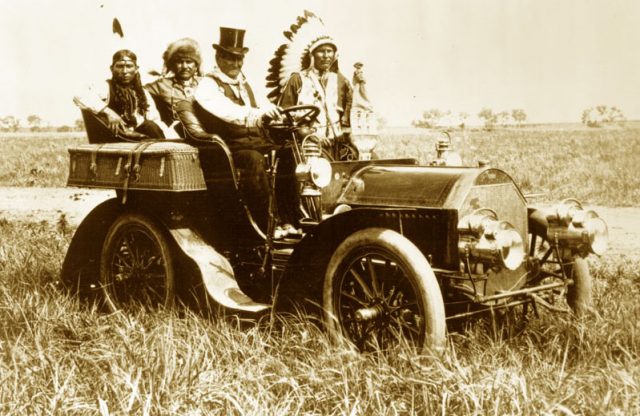 Geronimo in a 1905 Locomobile Model C

It was at the St Louis World’s Fair in 1904 that Geronimo stated he felt welcome among white people. He went so far as to call them “kind and peaceful” in his memoirs. As one of the earliest celebrities, he’d routinely write his signature in exchange for a fee. He was a gambler who donated his winnings to educating young Apaches. And his notoriety had him rubbing shoulders with those of high office. 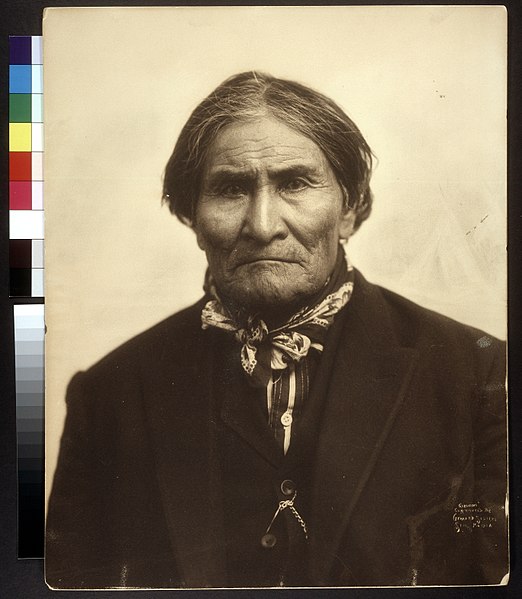 He was keen to persuade President Theodore Roosevelt to let the Apache return to their home territory. Geronimo famously attended Roosevelt’s second inauguration on horseback in 1905. Roosevelt refused, reportedly under guidance that Geronimo would be in danger from his enemies if he went back.

Even the Native American’s conversion to the President’s Protestant faith didn’t sway matters. It took until 1913 for the Chiricahuas to be released. By that stage Geronimo had been dead 4 years, passing away having fallen off his horse into a creek. He had reportedly been drinking and wound up contracting pneumonia from which he didn’t survive. 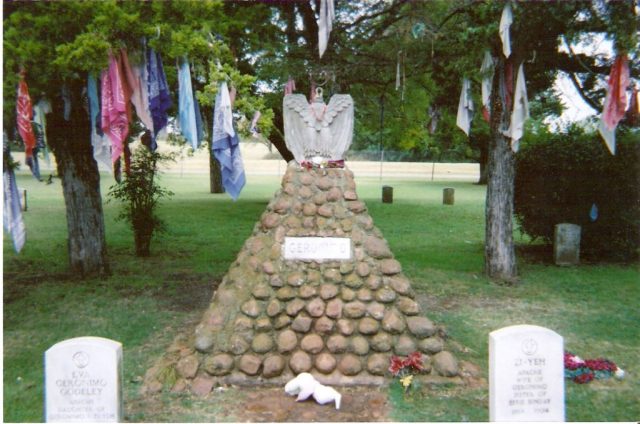 The epitaths from the American press were scathing. “Old Apache Chief Geronimo Is Dead” declared the New York Times. Geronimo was never a chief. The obituary described him as the offspring “of Chal-o-Row of Mangus-Colorado, the war chief of the Warm Spring Apaches, whose career of devastation through Arizona, New Mexico, and Northern Mexico in his day almost equaled that of his terrible son.”

As for President Roosevelt, he continued to harbor a rather low opinion of the tribes and never became the friend to the Native Americans Geronimo had hoped for. Despite the indignities of incarceration and being separated from his land and culture, Geronimo encapsulated the Native American spirit for many.

Check out 25 Beautiful Pictures of the Apache Tribe

He also made an unusual contribution to US history in the form of the iconic cry bearing his name. Paratroopers were inspired by the 1939 movie of his life, where he yelled “Geronimo!” while jumping off a cliff to evade capture. They and others now shout it out when plunging through the air.

He may have been a controversial figure, but Geronimo left a lasting mark on the American psyche.