An Iron Age Celtic warrior burial has revealed stunning remains of a chariot, shield, and even horses in a leaping pose has been hailed as the most important find of its kind ever in the UK. The surprising secrets about England’s ancient past were uncovered by archaeologists in the Yorkshire town of Pocklington. The eye-popping treasure trove dates back some 2,200 years.

The finds were made in 2018 but details are only just coming to light under conservation efforts and analysis. And the results are staggering for experts. As Paula Ware of MAP Archaeological Practice Ltd explained to the York Press, “The magnitude and preservation of the Pocklington chariot burial has no British parallel, providing a greater insight into the Iron Age epoch”.

Why is it so significant? The presence of an elaborate shield measuring 30 inches across has played a major role in this historic narrative. It was placed face down in the chariot with the middle-aged, battle-scarred occupant on top of the shield. 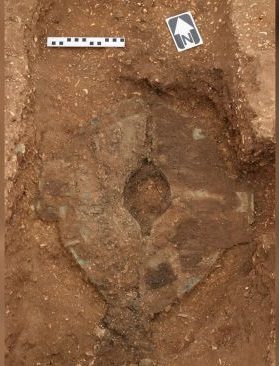 The shield was discovered near a chariot with the remains of two ponies buried in a leaping pose. (Image credit: Map Archaeological Practice )

Smithsonian describes the round defensive object, writing it “was made in the La Tène style typical of early Celtic art. It depicts organic forms like mollusk shells, as well as triskele, or triple spiral designs that draw the eye to the shield’s raised center.”

Of particular interest is the shield’s “scalloped” edge. The scallop effect is created by a series of semi-circles. It’s a “previously unknown design feature” and “is not comparable to any other Iron Age finds across Europe” says Ware, quoted by York Press. 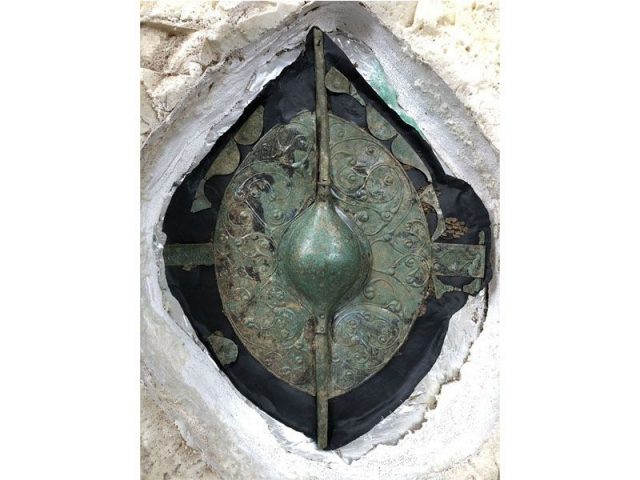 The amazing decorations and details of the shield have only recently come to light. Photo: Map Archaeological Practice

The shield is also punctured, which has altered perspectives on why such items were included during burial. Previously it was believed these were ceremonial items. This example shows evidence of having been used in battle and repaired afterwards. 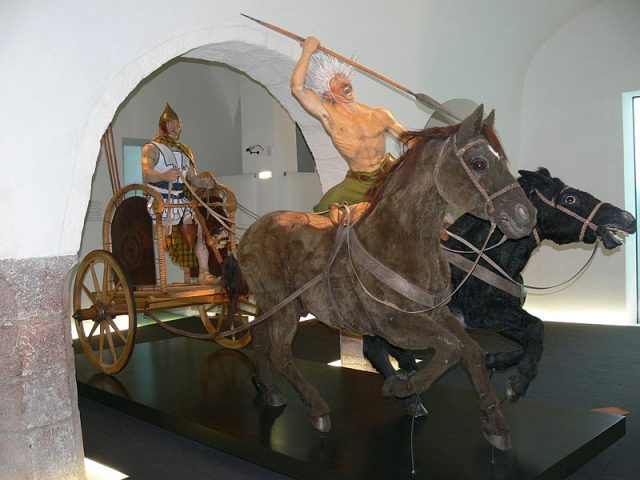 Celtic museum in Hallein ( Salzburg ). Reconstruction of a Celtic chariot. Photo by Wolfgang Sauber CC by 3.0

Who was the warrior in question? Someone important, according to the team. York Press writes the site is “a final resting place for a highly regarded member of the community due to being surrounded by the remains of six pigs, believed to act as an offering”.

Intriguingly, shield fragments appear to have been scattered across this part of the site. 2 brooches – one bronze and another with a red dragonfly design – were found with the “important” warrior. 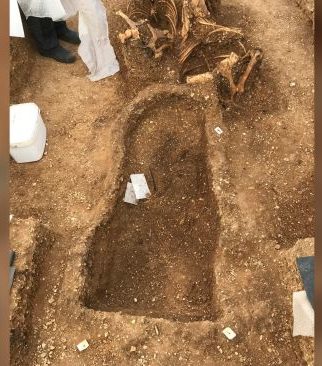 The excavation of the chariot and horses where the shield was also found. Photo: Map Archaeological Practice

The horses, or ponies, have been laid out in a leaping position. It’s presumed they were there to pull the upright chariot and its rider to the afterlife. Chariots in a grave are certainly dramatic but not unusual. Approx. 20 of them have been dug up in the UK in the past century. Having said that, none up to now have had equines attached! 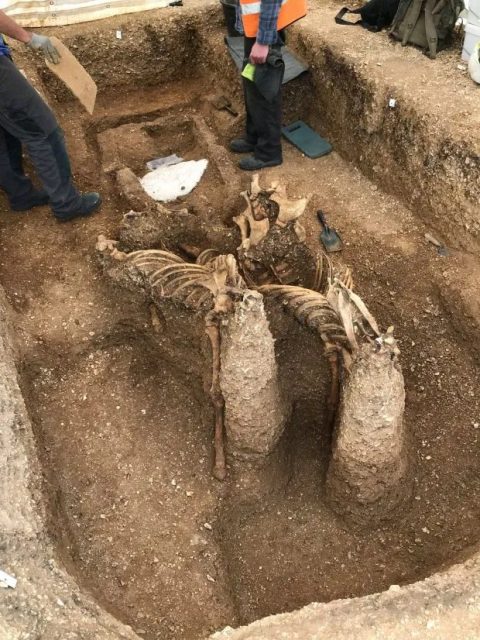 The horses were put in a leaping pose to guide the main into the afterlife. Photo: Map Archaeological Practice

This isn’t a strictly British phenomenon either. Live Science mentions “a Celtic prince in what is today France” from around 2,500 years ago. He was buried “in a lavish tomb complete with gorgeous pottery, a gold-tipped drinking vessel and … a chariot”.

Meanwhile, over in the South Caucasus a 4,000 year old discovery was made of a “burial chamber holding two four-wheeled chariots and plenty of treasures in the country of Georgia.” The Roman Empire saw many noblemen and their chariots laid to rest in Bulgaria.

The Independent talks to Dr Melanie Giles of the University of Manchester. She thinks the significance of the find cannot be understated. She’s called it “the most important British Celtic art object of the millennium”. She might want to hold her horses on that front… quite literally.

The excavation site of the Iron Age shield and chariot is owned by a housebuilding company, whose efforts helped uncover the ancient secrets. They’re going to give the man’s remains, plus chariot, to a museum. Work on their development continues apace, with new generations settling on the site of Britain’s vibrant and ancient history.