David Ostrom of Kansas, inspired by his love of Game of Thrones, has requested a trial by combat.  That’s right he has made an extremely unusual request of the legal system. Which is putting it mildly. Driven to distraction by jumping through admin-based hoops, he’s now challenging his ex-wife Bridgette and her attorney to old-fashioned trial by combat!

The extreme move relates to what the Washington Post describes as “litigating property tax and custody disputes”. It was inspired by Ostrom’s love of Game of Thrones, plus a more down to earth assessment by a human judge. As reported by the Des Moines Register, Ostrom “got the idea after learning about a 2016 case in which New York Supreme Court Justice Philip Minardo acknowledged that duels had not been abolished.”

This sword-wielder-in-waiting has chosen to include attorney Matthew Hudson on “the field of battle”, via a motion to the court. What exactly took place between the men isn’t clear. Ostrom has mentioned being “destroyed legally” by the process. However things happened, this action undoubtedly seems to go beyond legal norms.

“I think I’ve met Mr. Hudson’s absurdity with my own absurdity,” Ostrom told the Register, begging the question: how much more absurd can things get? One indication could be Ostrom’s idea of a 12 week preparation period before the big showdown. This is so he can get hold (quite literally) of 2 Japanese swords, a Katana and a Wakizashi!

Man requests “trial by combat” using Japanese swords to resolve a dispute with his ex-wife https://t.co/eDCn8drcR1

What could soon be a meeting of swords is currently a war of words. Hudson chose to respond to Ostrom’s legal blow in the strongest possible terms… on paper. Referring to the aspiring duellist’s desire to “rend their souls from their corporal bodies”, according to court documents, he began by highlighting an error.

“Surely (Ostrom) meant ‘corporeal’ bodies which Merriam Webster defines as having, consisting of, or relating to, a physical material body,” he wrote, in a communication known as filing a resistance. Recommending suspension of Ostrom’s visitation rights and also that he undergo a psychological evaluation, Hudson added “Although (Ostrom) and potential combatant do have souls to be rended, they respectfully request that the court not order this done.” 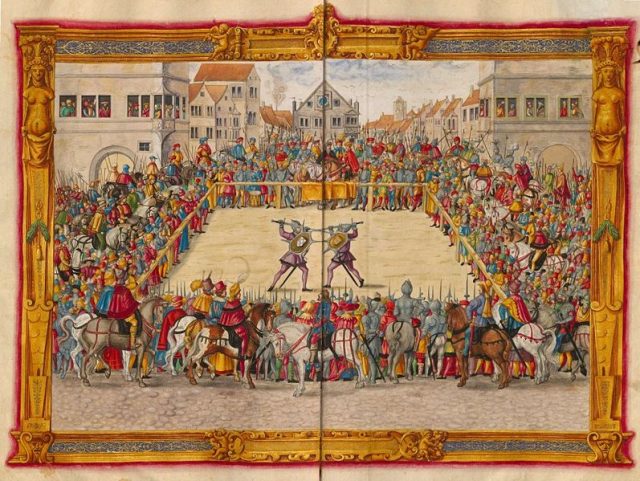 Trial by combat between Marshal Wilhelm von Dornsberg and Theodor Haschenacker in the Augsburg wine market (1409).

That doesn’t seem to have deterred Ostrom, who replied, “Respondent and counsel have proven themselves to be cravens by refusing to answer the call to battle, thus they should lose this motion by default”. Ostrom has also speculated that Hudson doesn’t have “the guts” to agree to the measure. Perhaps reassuringly, Ostrom has no experience of sword fighting. 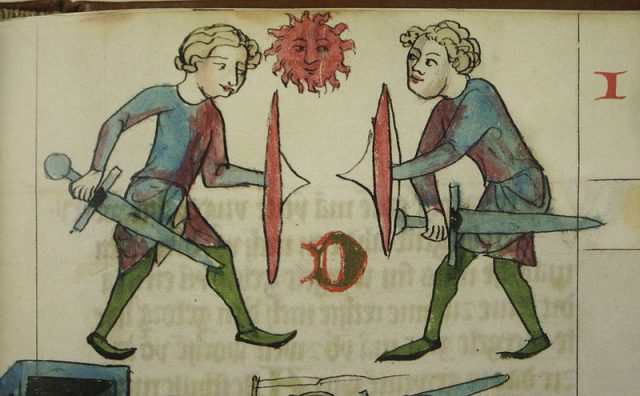 The slighted ex-husband might want to study Game of Thrones’ history of trial by combat. Washington Post notes that “even in the notoriously harsh world of Westeros, the practice was eventually outlawed because of its brutality.” Ostrom has pointed out an 1818 case where trial by combat was used in a British court.

In terms of US law the court Ostrom approached is in Iowa, where until the 1990s duelists were barred by the Constitution from running for office. The Iowa Repeal of Dueling Ban, Amendment 2 dated 1992, states “The measure repealed a ban on dueling from qualifications for elected office, making it possible for persons who had participated in a duel to be eligible for elected office.”

Meanwhile in England, where Ostrom cites his example, the last such duel was fought at a location called Priest Hill in 1852, where an Emmanuel Barthélemy killed a Frederic Cournet. The pair were political exiles from France.

While things hopefully won’t get as far as a physical confrontation, Ostrom’s motion is an arresting chapter of American legal history, and certainly a unique way of protesting against the wranglings of the legal system. However, in the end, his request for trial by combat was denied.