The Ancient Romans had jokes, just like everyone else. And at least one ancient Roman loved a good “Dad” joke. A gag inscribed along a stylus from AD 70 is proving of great interest to archaeologists. But it won’t be giving modern comics any sleepless nights.

So what’s the joke from this ancient Roman wannabe comedian? Classicist Dr Roger Tomlin of the University of Oxford was on hand to show people the historical funny. Translating from the original Latin, he delivered the following:

“I have come from the City. I bring you a welcome gift with a sharp point that you may remember me. I ask, if fortune allowed, that I might be able [to give] as generously as the way is long [and] as my purse is empty.”

Okay, far from a laugh riot. But dig a little deeper and there’s a joke not dissimilar to something you’d find today. The “City” mentioned is the majestic Rome while, as the sender acknowledges, the offering is modest. In other words: “I went to Rome and all I got you was this stylus.”

So the 132 mm long “Roman biro” (as the Guardian calls it) is the ancient equivalent of a holiday souvenir! Made of iron, the item was discovered at the site of what is now Bloomberg European HQ in London. The area used to feature the River Walbrook, a tributary of the Thames lost to history. Excavated between 2010 and 2014, it’s one of a range of discoveries – some 14,000 artifacts – casting new light on ancient trade.

The ancient souvenirs (stylus) with the inscriptions (Museum of London Archaeology)

The Museum of London Archaeology (MOLA), who found the treasures, describe the stylus as “unique” and “the most elaborate and expressive inscription of its kind”. How so? For starters it’s extremely rare. 200 other styluses were recovered, but this is the only one with an inscription. Perhaps appropriately for a pen, only a handful of such objects have been unearthed over the years. MOLA refers to the “Bloomberg inscription” as “the finest” and “unparalleled in the length, poetry and humour of its inscription.”

Wooden tablets filled with wax were used to inscribe upon. Over 400 of the tablets were found, representing a chunk of historic Roman admin relating to their sizeable UK presence. “These fragile documents rarely survive in the archaeological record, but the waterlogged site helped preserve the wax surfaces and their inscriptions” reports Live Science. 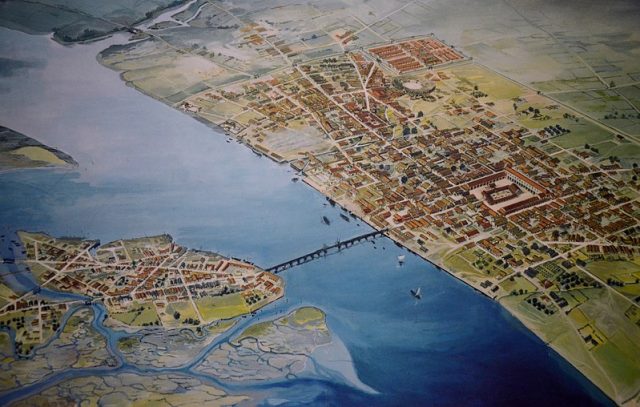 Reconstruction drawing of Londinium in 120 AD, Museum of London. Photo by Carole Raddato CC by 2.0

The site also mentions “one document dated January 8 of 57, in which one man acknowledges that he owes another man 105 denarii for merchandise that was sold and delivered.” This isn’t a typical I.O.U and is thought to be of major significance as “Britain’s earliest piece of handwriting and London’s earliest financial document.”

Londinium was the Roman settlement and go-to commercial center in what’s now the British capital. The earliest reference to London on a tablet has also been identified through the excavations. It wasn’t all business – a lid from a barrel indicates a supply of Amineum wine. Pliny the Elder rated it as “the finest grape variety” according to Live Science.

From the sublime to the plain slimy, MOLA found more than Roman stationery at the Bloomberg site. It also pinpointed early evidence of cockroaches making themselves at home in the British Isles. Eggs were found in the tiles of what appeared to be a communal bread oven. Delicious!

Painstaking restoration took place so the Bloomberg stylus inscription could be made out. Even then it was a struggle to read. For experts like senior Roman finds specialist Michael Marshall, the effort was worth it. Quoted by the Guardian, he calls it “one of the most human objects” and a “very unpretentious and witty” message. Spelling mistakes call to doodles and scribblings on modern day postcards.

Comedy aside, the inscribed pen with the ancient Roman joke “highlights the crucial role that writing and literacy played in allowing traders, soldiers and officials to keep in contact with peers, friends and family,” MOLA writes, “some of whom lived over a thousand miles away.”

« Inside the Tragic Text and Conspiracies Surrounding Kurt Cobain’s Suicide Note
The Librarian did It! Case Closed in Huge $8 Million Theft of Rare Texts »