Archaeologist on Trial for Forging Earliest Depiction of Christ’s Crucifixion

A famed archaeologist is on trial for allegedly forging what is perhaps the earliest image of the crucifixion. Basque archaeologist Eliseo Gil is in court for allegedly defrauding his profession and a museum by faking artifacts he claimed, in 2006, came from a Roman settlement he had uncovered at Vitoria, in the Basque Country.

The more than 450 artifacts were inscribed with graffiti, and with words Gil said were the earliest known examples of the Basque language, as well as Latin and Roman phrases.  Most controversially, they also contained a 3rd century depiction of the crucifixion of Christ — a discovery that wowed the world and brought Gil much acclaim as it was believed this could be the earliest known depiction of the crucifixion. Now, however, Gil and two colleagues are on trial in Spain for defrauding the world, and lying about the antiquities.

When the men first announced their findings, the archaeological world was stunned, and Gil, in particular, became instantly famous in his field. Gradually, however, some of his colleagues began to look askance at the artifacts, largely because the languages inscribed on the shards of brick, bone and glass did not jibe with what the experts knew about linguistics of the time period. Gil said they were from the 3rd century, A.D.

Joaquin Gorrochategui, a professor of Indo-European language at Basque Country University, was one of the experts who did not immediately suspect anything was wrong, he told the Telegraph in an early February interview. He explained, “At first, I was very surprised. The Basque inscriptions were 600 years older than any others, so that was startling, but I didn’t think they were false.” 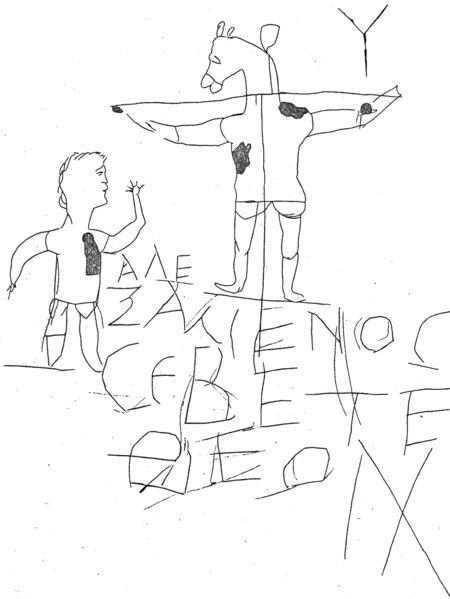 Contender for the earliest known depiction of the crucifixion, although this was made as a sort of joke. Second century AD pagan graffiti depicting a someone worshiping a crucified man with a donkey head. The Greek inscription reads “Alexamenos respects God”. It is presumed to be making fun of a Christian soldier.

Doubts began to creep in shortly thereafter, however, Gorrochategui continued. “The Latin was vulgar; I could not believe my eyes,” he stated, pointing out that names were spelled incorrectly, as were other words and phrases. Furthermore, he said, they found modern punctuation — like commas and upper and lower case letters — that did not even exist in writing and language at the time.

He told associates at the Vitoria Archaeology Museum of his doubts, and ultimately the government launched a commission to investigate the matter. Experts were called in from a wide range of archaeological disciplines, who eventually agreed, in 2008,  that the entire discovery was a complicated, detailed scam.

Display inside the Vitoria Archaeology Museum

It isn’t just Gil who faces charges; so does Oscar Escribano, a geologist with whom Gil is said to have perpetrated the hoax, and Reuben Cerdan, a materials analyst who confirmed, all those years ago, that the artifacts were genuine. If convicted, Gil and Escribano face up to five years in prison, the term argued is fair by the prosecution. Cerdan faces two and a half years.  They also face substantial fines, for what officials declared was extreme damage to the artifacts of the Iruna-Veleia archaeological site.

All three have not wavered in their insistence that they did nothing wrong. In 2015 at a press conference, when asked about the professional unraveling that has occurred since the commission released its report, Gil said, it was “like going through torture.”

Related Article: 2 Men who found Viking Treasure Hoard are now going to Jail because of It

But few remain unconvinced about the scam. Recently live science asked archaeologist Ignacio Rodriguez-Temino his opinion on the scandal. He said, “I have no doubt about their falsity,” referring to the artifacts and inscriptions. His attitude seems to sum up what most in the field believe, though whether the prosecution will get the stiff prison sentences it seeks is, as of yet, unknown.