How the World’s Last Blockbuster Video Store Manages to Survive

Want to rent a DVD from the last Blockbuster store? It takes a trip to Oregon, location of the chain’s final remaining store – indeed, the last such outlet on the planet! There you’ll find the latest releases sitting on shelves ready to take home. In this case “Be Kind Rewind” means a nostalgic trip back in time, rather than anything tape-related.

The small city of Bend is where the outpost of old school entertainment can be found. Owned by the Tishers (Ken and Debbie) and managed by Sandi Harding and her dedicated team, it’s been open for 20 years.

“After successfully operating their locally owned video stores for 10 years, the Tisher’s, along with their partners, Debbie’s parents, Larry and Berniece Doan made the decision to become a Blockbuster Franchise in June of 2000” writes the Bend website. “This was the beginning of our Blockbuster Story. How a small business, thru stubborn determination and a bit of pure luck, has been able to operate in the chaos of an ever changing home video world.”

Exterior of the last Blockbuster video store. Photo by Coasterlover1994 CC by 4.0

When Blockbuster went bust a decade ago, the team decided to keep the show on the road. So far their efforts have kept the archaic flame alive. Things are certainly very different today, Harding was having to act as both manager and disc harvester. When their trusty distributor went out of business, she had no option but to hit the streets for some hands on shopping.

“I usually start out with 30 [copies] on DVD, and 12 to 14 Blu-Ray” she tells Vice. “I’ll go to Walmart, Target, Fred Meyer, every retailer we have here in town”. Don’t these sizeable purchases draw attention? Absolutely, which is why Harding keeps it as amicable as possible. “I’ll only get five or 10 from each one. They don’t like me very much if I come in and just wipe out their shelves”.

Interior of the last Blockbuster video store. Photo by Coasterlover1994 CC by 4.0

How did lockdown affect the good folks at Bend? It meant shutting down the place a couple of times. However, Harding and co found a way to keep that Block busting during the isolation period – moving their operation curbside. “Those who were jonesing for a particular Blu-Ray would call the store, pay for their rental over the phone,” Vice reports, “and when they rolled up, a masked-and-gloved Blockbuster worker would clean the DVD case with Clorox wipes, put it in a Ziplock bag, and take it to their car.”

Social media helps Bend Blockbuster spread its message rather than the virus! “We’ve been crazy busy with all the online orders made recently” their Instagram account account said, “and that’s been a tremendous help bringing income into the store assuring us that we can stay open during these tough times!” 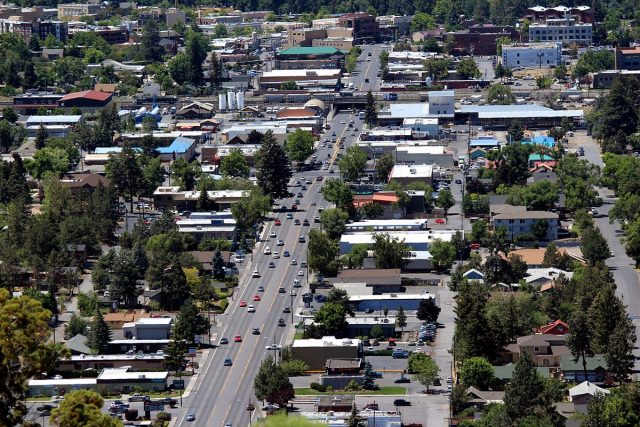 View of Bend, Oregon from Pilot Butte. Photo by Andy Melton CC by 2.0

Harding was conflicted about keeping business going and looking after her beloved staff and customers. “I’m like the Blockbuster Mom” she says to Vice. “These are my kids that work here, the customers are my family and, my gosh, I can’t put them at risk either. Your heart is just torn in two different directions”.

With the store up and running again, social distancing has proved tricky. Especially thanks to Russell Crowe’s jockstrap. Come again? This priceless piece of onscreen intimacy and visitor attraction was a gift from comedian and TV host John Oliver. Bend used to be part of a group of surviving stores – Anchorage in Alaska being one of those. Oliver originally bought Crowe’s ‘Cinderella Man’ jockstrap for the Alaskan hold-outs, hoping to generate heat in that chilly climate. He paid $7,000 for the item. When Alaska yanked the shutters, it then traveled to Oregon, where crowds come to gawp at it in uncomfortably close quarters.

Australia was the second last country to have a Blockbuster. When things went down Down Under, only Bend and its selection of 22,000 discs were left. It was a sad end to a mighty entertainment empire. “At its peak in 2004, it boasted 60,000 employees and 9,000 stores worldwide” writes All That’s Interesting about Blockbuster. “Within a decade of streaming services encroaching, however, its $5.9 billion revenue dramatically dropped to $120 million.” Revenue is now found in Bend Blockbuster merchandise. Interested parties can buy stuff like caps, t-shirts and replica membership cards.

Related Article: Drive-In Theaters are Coming Back in Style for a Socially Distanced World

So what are 2020 audiences renting from the store? All That’s Interesting writes, “the selection runs the gamut — though a definite arc in their choices can be observed. Ultimately, it’s the selection of films that are available — one not dictated by algorithms — that seems to be drawing people in the most.” Movies such as Outbreak and Contagion have definitely had a play or two. But Harding has also mentioned relatively obscure classics like time travel romance Somewhere In Time (1980).