When Was Man in Arabia? 120,000-Year-Old Footprints Discovered

Scientists, archaeologists and historians know that man existed on the African continent hundreds of thousands of years ago – about 300,000, to be precise.

But when man travelled from Africa to Arabia has been less fully understood, in part because fossil records in the latter region are sketchy, at best.

Now, however, recent discoveries made in a lake bed in the Arabian Peninsula may offer fresh clues about his arrival, and how man crossed into the Middle East and Eurasia.

A team of researchers has been investigating this migration for more than a decade, and now team leader Michael Petraglia, an archaeologist with the Max Planck Institute for the Science of Human History, says new developments show the presence of man earlier than previously believed. 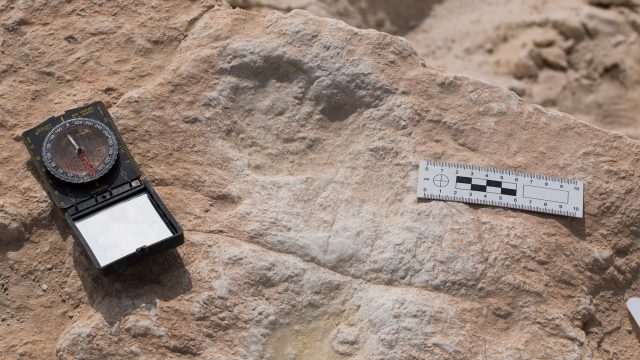 This is the first human footprint discovered at Alathar. Credit: Stewart et al., 2020)

These are, Petraglia said recently, “the first genuine footprints of Arabia,” a momentous discovery if the prints are an accurate reflection of who, and what, lived in the area thousands of years ago, much sooner than experts previously thought.

A colleague of Petraglia’s, paleo-anthropologist Kevin Hatala of Chatham University in Pittsburgh, noted that, “these footprints give us a unique snapshot of the humans living in this area at the same time as the animals. That tight association is what’s so exciting to me.”

Hundreds of prints were found in the lake bed. Most were animals – wild asses, camels, elephants and others prevalent in the region at the time – but seven belonged to humans, likely Homo sapiens, not Neanderthals.

Experts have long known that man left Africa and headed to southern Greece and an area we now know as Israel. From there, man probably travelled through the Sinai Peninsula, the single land ‘bridge’ that linked Africa to other parts of the globe. Man then travelled north into the regions of the Mediterranean.

What has thus far been less clear is when man crossed the Sinai and headed south, arriving in what we know today as Saudi Arabia.

Earlier fossil records showed that man came to this region about 85,000 years ago. But this recent discovery of footprints indicate it was much earlier; experts say about 120,000 years ago is a more precise estimation.

The Nefud Desert is approximately 500 kilometres southeast of the Sinai Peninsula. And while the desert would prove an insurmountable problem for anyone trying to cross it, once it was not merely a blanket of sand. Once, thousands of years ago, the area was grassy, and had sources of fresh water – rivers and lakes. 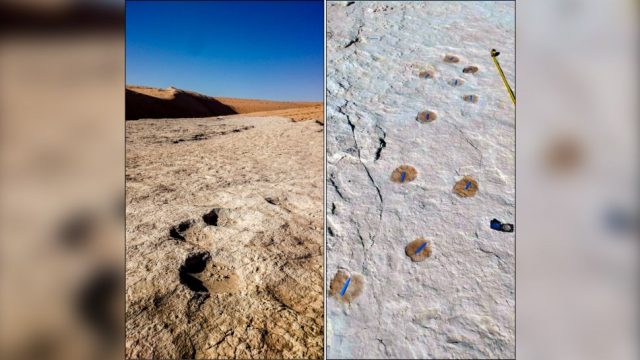 Other fascinating footprints have been found in the lake bed of Arabia. Elephant (left) and camel (right). Credit: Stewart et al., 2020)

Early man could have crossed this terrain more easily, and readily, back then. The area even had a significant amount of rainfall, many more millimetres than it gets today.

The scientists, archaeologists and other experts concede that pinpointing the species of humans that made these footprints is difficult to ascertain with absolute certainty. But they insist it was almost surely Homo sapiens, because they existed elsewhere in the area.

The team also believes that the animal prints indicate human presence in the lake bed. However, they readily admit they can only speculate about why man vanished from the region. Did man simply die out?

Did he move on to more hospitable climes once the weather began to change and evolve? No one can answer these questions absolutely – yet.

But continuing research in the region, and assuming there are still more fossil records to be uncovered, sooner or later all these questions about where – and exactly when – man appeared in this area of the Middle East will one day be solved.

« Germany’s Nebra Sky Disk Reevaluated, Turns Out to be Not so Old
Lady Diagnosed With Medieval ‘Holy Fire’ Disease After Experiencing Burning Pains in her Legs »