The late Queen Elizabeth II wasn’t known for being a traditional queen. She showed this during a 2021 volunteer luncheon organized by educational charity the Eden Project. Instead of cutting dessert with a knife, she opted for something more befitting of a royal: a ceremonial sword.

The royals sure do love their dessert

The Queen attended the lunch with Camilla, then Duchess of Cornwall, and Kate, then Duchess of Cambridge. The three acknowledged the support of volunteers working to organize the Queen’s 2022 Platinum Jubilee, in spite of the COVID-19 pandemic. The event celebrated the 70 years she was been in power, the longest of any monarch.

The event’s dessert consisted of a large cake, which the Queen cut using a ceremonial sword. Approaching the cake, she showed some uncertainty, saying, “I don’t think this is going to work.” When told there was a knife to use, she humorously replied, “I know there is. This is something that is more unusual.” 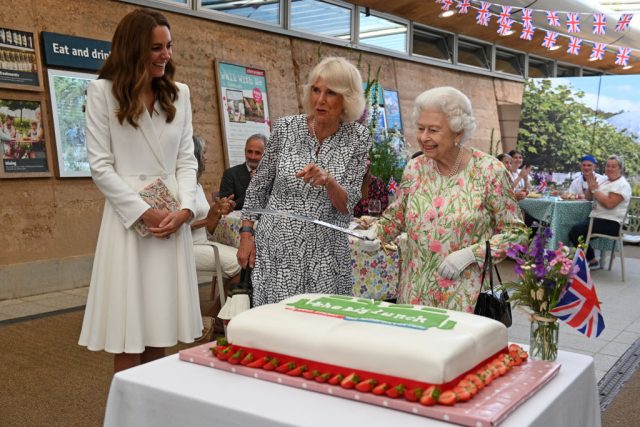 The room erupted in laughter at the response. Camilla helped her mother-in-law slice through the remaining portion of cake, after which she said, “That looks very good.” She later agreed to use a knife to cut additional pieces.

The lunch, aptly titled The Big Lunch, started in 2009 as a way to encourage volunteers to spend time together. Camilla is a patron of the event.

Queen Elizabeth II celebrated her 95th birthday at Windsor Castle on June 12. While her birthday was April 21, it is customary to mark the occasion on the second Saturday of June.

With pandemic restrictions still in place, the parade was scaled down. Typically held in central London amidst a large crowd, it was moved to Windsor Castle, where spectators were encouraged to stay away. It was attended by the Queen and her cousin, the Duke of Kent, who was present as the Colonel of the Scots Guard. 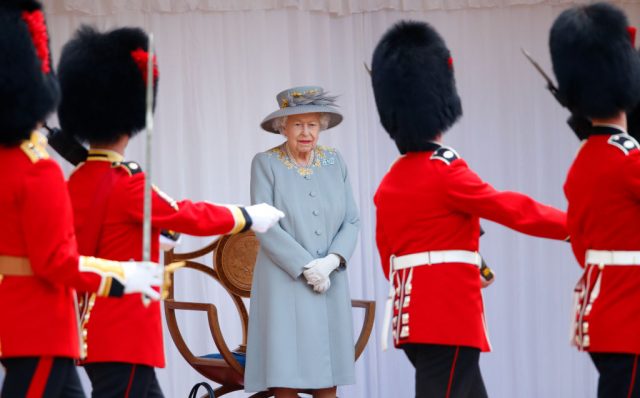 There was a smaller version of the Trooping the Colour ceremony, featuring the F Company Scots Guard trooping the color of the 2nd Battalion Scots Guard. The maneuvers were followed by mounted regiments, gun salutes, and a display from the Red Arrows.

The parade is a birthday gift from the Household Division, known for being the British Army’s most prestigious regiments. They are closely affiliated with the royal family.

Not all fun and games

The weekend wasn’t all fun and games for the Queen, as the U.K. hosted the G7 summit. Leaders from Canada, the U.S., Italy, Japan, France, and Germany met with then-British Prime Minister Boris Johnson to discuss politics and the pandemic.

More from us: Oxford University Students Vote To Remove Portrait Of The Queen

The Queen showed her humorous side during a group photo with the G7 leaders. With everyone socially distanced for the photo op, she asked, “Are you supposed to be looking as if you’re enjoying yourself?” to which Johnson replied: “Yes, definitely… We have been enjoying ourselves, in spite of appearances.”