Feel How The Gladiators Felt: Tourists Go Below Rome’s Colosseum For The First Time

The underground zone of the Roman Colosseum, where warriors waited to face each other for the Emperor’s entertainment, is now fully open to the public. This follows a lengthy restoration project, costing tens of millions of dollars.

Death matches — typically accompanied by tigers and even theatrical props — are a familiar sight from movies such as Gladiator. What’s less known is that there was a behind-the-scenes area, just like any other spectacle. Blood-spattered or not.

What went on below the infamous Roman Colosseum?

Compared by some to a beehive, the hypogea — or underground vault — was comprised of passages linking various rooms where unfortunate combatants would receive their call to perform.

Their entrances were dramatic, rivaling any pop concert. Gladiators would move through the network before, as CNN puts it, “entering the elevators which would catapult them onto the arena.”

The New York Times notes that hydraulic yet horrific machinery was used to transport both man and beast to an often gruesome fate. Once up top, the uncaged participants would face “gladiatorial contests, bloody tussles between wild animals, staged sea battles and theatrical performances with condemned criminals acting out myths that usually ended badly.” 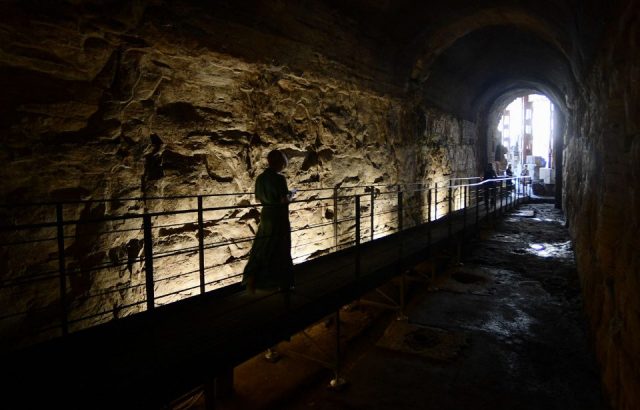 What can visitors expect when they take a trip to the iconic yet infamous landmark? For starters, they’ll walk in the footsteps of doomed fighters but slightly higher up, care of wooden platforms.

As CNN reports, the dimly-lit passageways — made all the creepier by a supply of candles — are exposed to the sunlight, due to the absence of an upper floor. The Times writes that a competition was held to design a replacement level in order to shut in the hypogea once more.

Any claustrophobes might want to take advantage of the current situation now! Though according to the Colosseum Rome website, a guide will always be on hand to look after the public.

The Colosseum restoration was a surprisingly fashionable enterprise

The Archaeological Heritage Department worked on the restoration. But financial backing came from a perhaps surprising source…fashion house Tod’s, the CEO of which is Diego Della Valle.

CNN covers his view that the project shows the business world and art heritage industry working together in perfect harmony. 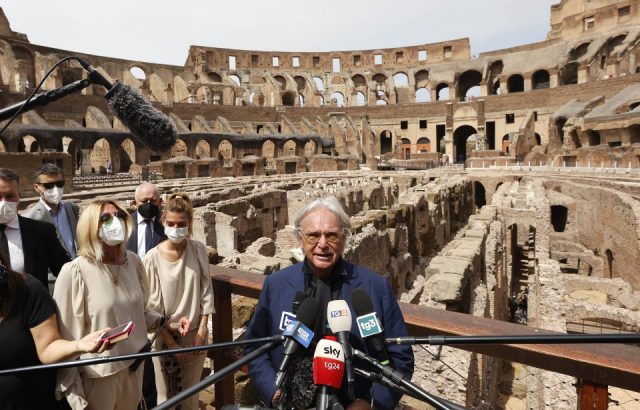 The best part of a decade has been spent restoring the Colosseum to its former, and somewhat gory, glory

Work has been underway to restore the Colosseum since 2011. Covid threw a net over proceedings, resulting in a slight delay. However, the momentum behind the project was strong, thanks to a team of archaeologists, engineers, architects, and other experts.

CNN reports that a small section of the underground was revealed to the public in 2016. But this is the debut for the whole operation, that people will be able to experience in a unique and unprecedented way.

The hypogea was out of sight for almost 2,000 years. It spent 450 years in service, where it satisfied the (by today’s standards) warped sensibilities of baying crowds and decadent rulers. 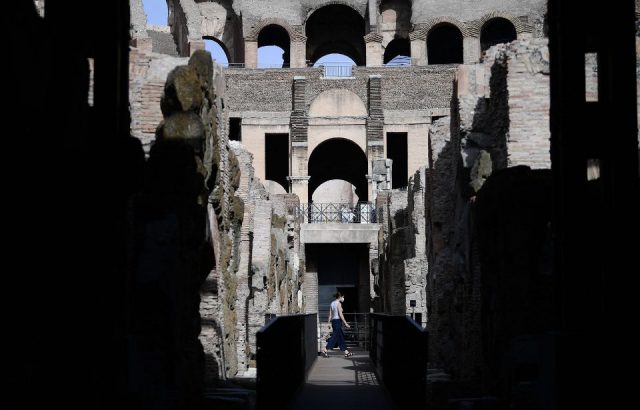 It opened its doors in AD 80. The brainchild of Emperor Vespasian, it was named the Flavian Amphitheater after the dynasty he represented. In the 6th century, the Colosseum had fallen out of favor and much of it deteriorated. History notes that “up until the 18th century it was used as a source of building materials.”

When it was open, however, it was a magnificent if morbid testament to a crazy, almost showbusiness-like enterprise. The Colosseum website states it “was restructured and constructed at least twelve different times; it also boasted a considerable number of machines, including elevators and hydraulic mechanisms.”

More from us: Netflix Hit ‘The Dig’ Is Boosting Visitor Numbers At Sutton Hoo Post-Lockdown

The restoration has enabled archaeologists to find out more about Rome’s ancient past, brushing aside the earth to unveil a combination of artistry and savagery.

Dare you put yourself in the position of a gladiator, on their way to certain death at the behest of an all-powerful empire?