Before The Kardashians, There Were The Gabor Sisters — The Original Hollywood Socialite Family

The Kardashian sisters have built an empire over the past decade with their own television show, clothing lines, makeup lines, and enough scandals to keep people interested in them. However, before the Kardashians, there was another trio of sisters that ruled Hollywood. The glamorous Gabor sisters — Magda, Zsa Zsa, and Eva — made head turns wherever they went.

Between the three of them, they accumulated a total of 19 husbands. Here we dive into the glamorous, and oftentimes tragic, lives of the Gabor sisters.

The Gabor sisters spent their early years in Hungary 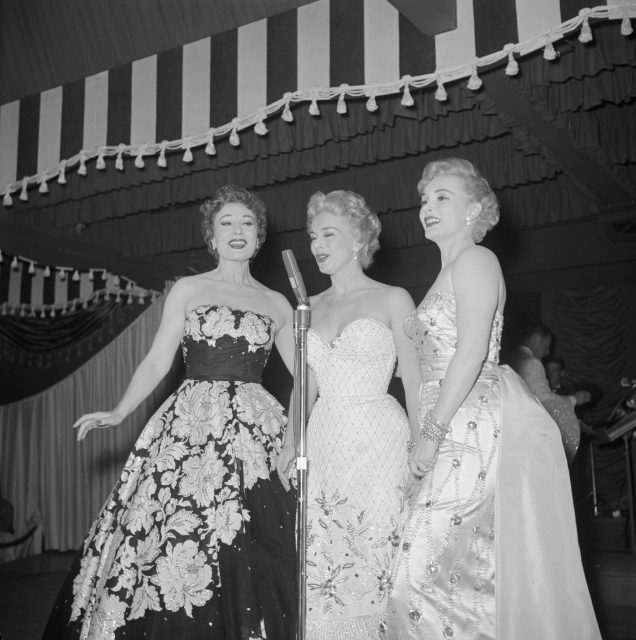 The Gabor sisters in a hotel in Las Vegas, circa 1953. From left to right Magda, Eva, and Zsa Zsa. (Photo Credit: Bettman/ Getty Images)

The Gabor sisters were born in Budapest, Hungary, in the years following the First World War. Magda was the eldest, born on June 11, 1915. Two years later, her sister Zsa Zsa was born on February 6, 1917. The trio was completed on February 11, 1919, when the youngest sister Eva was born.

Their parents were Vilmos and Jolie Gabor. Vilmos Grün was a Hungarian Jew who changed his last name to Gabor to advance both financially and socially in Hungary, a country that was becoming increasingly anti-Semitic. Jolie Gabor was a social climber who used to charge her daughters two cents for affection.

As the sisters were growing up, it appeared that Jolie’s goal was to assure that her daughters turned out as extraordinary and as successful as possible. Jolie would encourage her daughters to compete with one another, the prize being their mother’s devotion for a small period of time. Rather than her daughters seeking distance from Jolie, the Gabor sisters remained devoted to their mother for their entire lives.

Jolie had her daughters trained in ballet, tennis, riding, ice skating, and fencing. Although the Gabor sisters were tutored in all subjects, none of them had a passion for academic learning. This could be because their mother Jolie didn’t think such skills were necessary. Jolie thought a woman’s goal should be to find a man, above all else. She preached to her daughters that they needed “poise, makeup, hair, jewelry, clothes and furs” to achieve ultimate success. 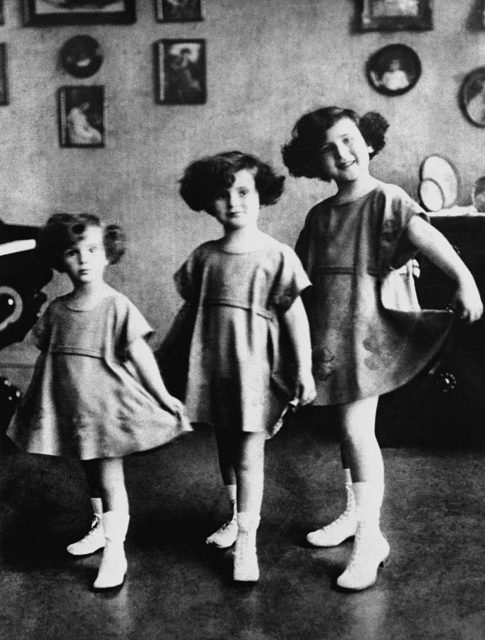 Hitler invaded Hungary in 1944. By the time of the invasion, Eva Gabor had been in the United States since 1939 and Zsa Zsa had been there since 1940. However, Magda and her parents were still living in Budapest and were all arrested, even though the family had converted from Judaism to Catholicism in 1928. Furthermore, Magda had become involved in the anti-Nazi underground several years prior to the German invasion of Hungary.

Carlos Sampaio Garrido has been honored by Yad Vashem as one of the Righteous Among the Nations for his actions in Hungary in 1944, which ended up saving Magda, Jolie, and Vilmos, as well as nearly 1,000 other Jewish Hungarian citizens. Because of Ambassador Garrido’s bravery, the Gabor family would be able to be reunited in America.

Eva and Zsa Zsa in America 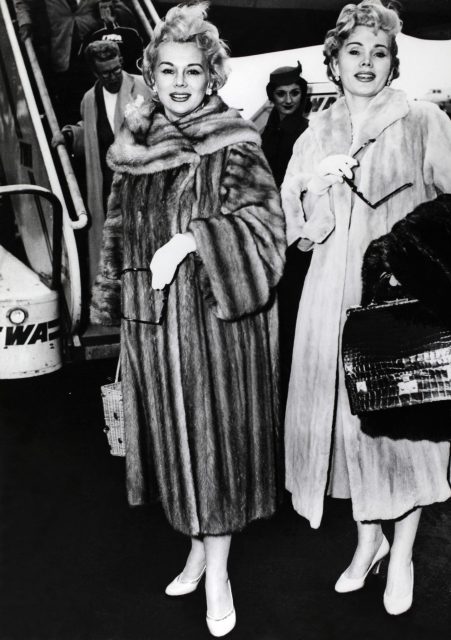 While Magda and her parents were in Europe during the Second World War, Eva and Zsa Zsa were living it up in the United States. Eva married her first husband, osteopath Dr. Eric Drimmer in 1937 when she was 18 years old, and shortly afterward,  the pair immigrated to the States. Eva found fame relatively soon after her move, signing a contract with Paramount Pictures.

The studio gave her acting lessons, and she made her first leading-lady debut in the 1941 film Forced Landing. Eva appeared in minor roles for films including The Last Time I Saw Paris (starring Elizabeth Taylor) and Artists and Models (starring Dean Martin and Jerry Lewis).

In 1945, Eva met famed German director Ernst Lubitsch on the set of Scandal (1945). The two began a four-year affair despite the 27-year age gap between them. 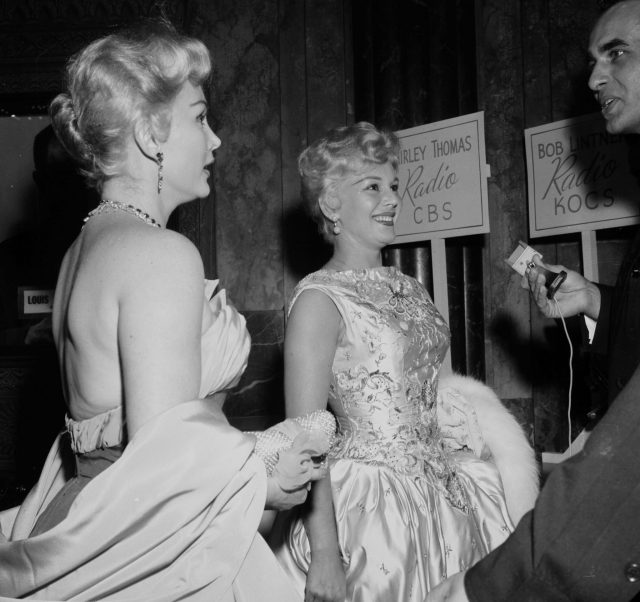 Like Eva, Zsa Zsa married her first husband, Burhan Asaf Belge (a Turkish government official), in 1937. By the time the pair arrived in America in 1941, the marriage had deteriorated and Zsa Zsa applied for a divorce shortly after arriving in the States.

Not long after her arrival in the States, Zsa Zsa met the founder of the Hilton hotel chain, Conrad Hilton Sr. The two were married four months after they met on April 10, 1946. Zsa Zsa was 30 years Hilton’s junior, and their marriage was not necessarily a happy one, and Zsa Zsa was kept on a strict budget throughout their marriage.

During their marriage, Zsa Zsa’s mental health spiraled and she was diagnosed with bipolar disorder. She was institutionalized against her will in 1945 by her husband Conrad Hilton. 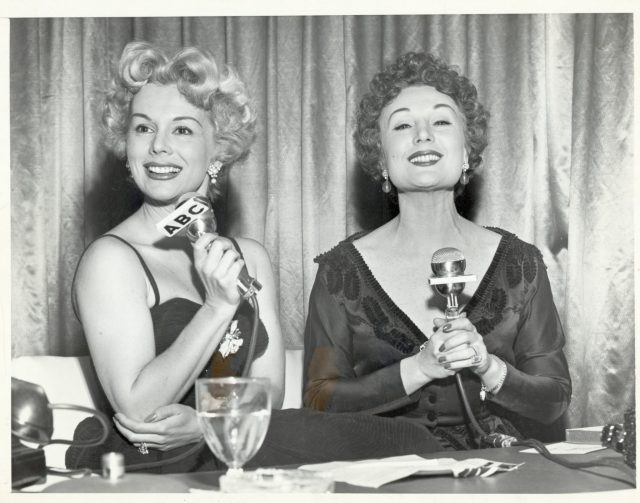 Magda arrived in the United States in 1946. The trio of beautiful sisters became an overnight success with the American public, becoming possibly the first people who were famous simply for being famous.

They called everyone “darling” and were seen as the epitome of European wealth. According to Cindy Adams (who Jolie Gabor “told” her autobiography to), the sisters were “blonder than anyone. They wore jewelry larger than anyone. They had these wonderful accents which they all but went to teachers to make sure they didn’t lose.”

By the 1950s, photos of the famous sisters were appearing regularly on the covers of major magazines, in gossip columns, and in tabloids. Zsa Zsa’s divorce from Conrad Hilton in 1947 was feverishly covered by the tabloids, which resulted in the sisters being further thrown into the public eye.

They became so well-known in America that Oscar Hammerstein II rhymed “Zsa Zsa Gabor” with “nuclear war” in a number listing the absurdities of American life from the 1958 musical Flower Drum Song. 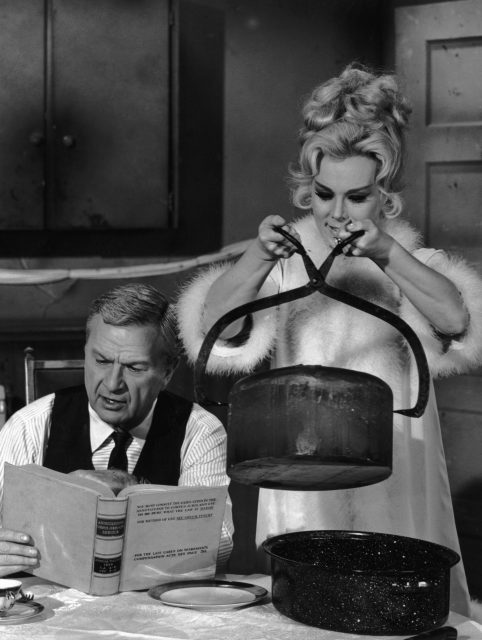 In 1953, Eva Gabor landed her own television show, The Eva Gabor Show, which hosted many celebrity guests during its single season on air, including both Magda and Zsa Zsa. The sisters also appeared on many popular talk shows of the time, including The Dean Martin Show and the Merv Griffin Show. Eva and Zsa Zsa also became widely recognizable for their acting. Eva made a total of 28 films and starred in the television series Green Acres, while Zsa Zsa made a total of 44 films.

The Gabor sisters were no strangers to scandal 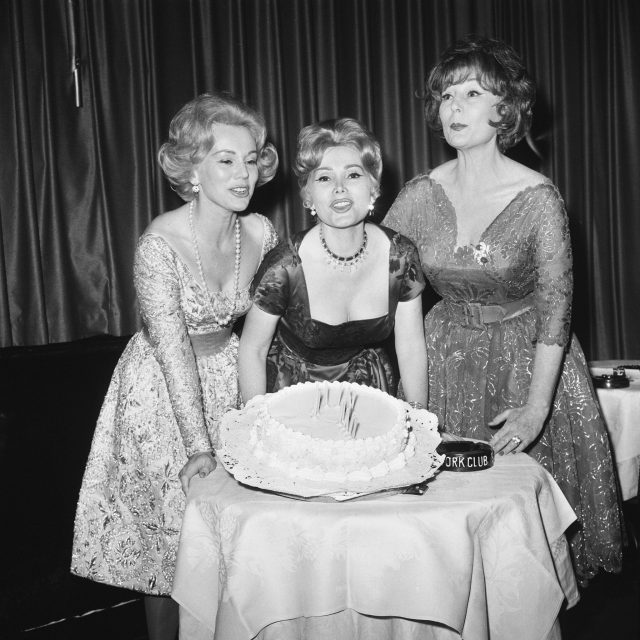 The Gabor sisters faced their fair share of scandals during their time in the spotlight. They were often in the news for their many husbands and subsequently their many divorces.

Magda was married six times, Zsa Zsa was married nine times, and Eva was married five times. Zsa Zsa and Magda once married the same man. British actor George Sanders was first married to Zsa Zsa and then later married Magda, although their marriage only lasted one month.

Aside from the many men the sisters married, they also had their fair share of alleged affairs. It has been speculated that President John F. Kennedy, who had an affinity for blondes, sparked up a relationship with Zsa Zsa.

However, according to Zsa Zsa herself, JFK “took her out for three months, but I never slept with him. He slept with everybody. He took me out because he liked to be with me.” Zsa Zsa did, however, have an affair with her stepson Conrad “Nicky” Hilton Jr. in 1944. Conrad Hilton Jr. would later go on to be the first husband of Elizabeth Taylor.

According to Zsa Zsa’s only daughter, Francesca (who Zsa Zsa had with her second husband Conrad Hilton), Eva Gabor was bisexual and had an affair with Marlene Dietrich. Although Eva was married five times, if her sexuality was uncovered during her lifetime, it would have caused quite the scandal.

Zsa Zsa especially continued to make headlines throughout her later life. In June 1989, she was pulled over for having an outdated registration. The argument escalated and Zsa Zsa slapped the police officer across the face.

She was charged with five offenses, including battery upon a police officer and having an open container of alcohol in the car. She was sentenced to three days in jail and 120 hours of community service. 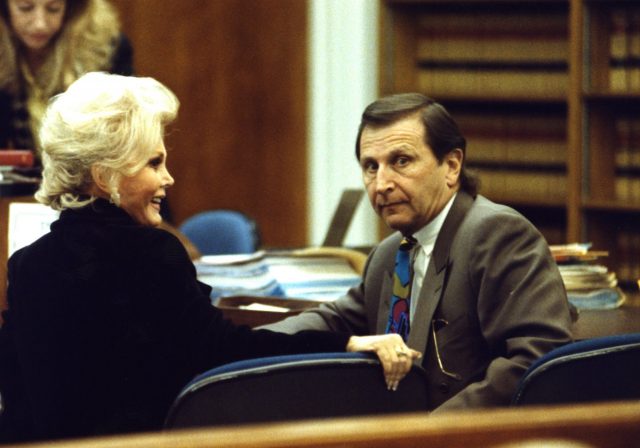 Zsa Zsa and her defense lawyer in court after she slapped a police officer, 1989. (Photo Credit: Donaldson Collection/ Getty Images)

More from us: 11 Meryl Streep Facts That Are Almost As Iconic As She Is

Although the trio of sisters are not as well known to younger generations, they nonetheless were truly the first family who gained stardom just for being who they were.

« Were Rising Gas Prices To Blame For The Decline Of The Hippie Trail?
Sam Elliott: Facts About The Man, The Voice, The Mustache »