The Lavish Life Al Capone Lived While Imprisoned At Alcatraz

Al Capone, also known by the nickname “Scarface,” is arguably the most notorious gangster of all time. By 1924, his bootlegging (and other illegal) activities were making him up to $100,000 a week, pushing his estimated net worth upwards of $1.3 billion today. With a cash flow like this, we have to imagine that Capone was trying to bribe guards once he was imprisoned in order to get better treatment at Alcatraz. Here, we take a look at the notorious gangster’s time in the infamous prison.

Who was Al Capone? 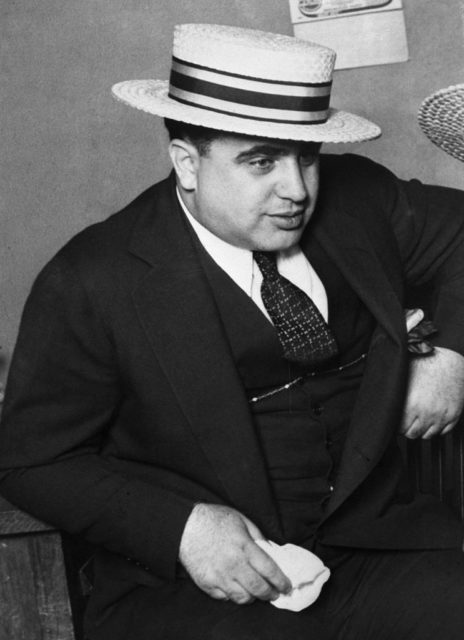 Al Capone was born in 1899 in Brooklyn, New York. He had dropped out of school by the sixth grade and eventually was accepted as a member in the powerful Five Points Gang, based in Lower Manhattan. Around 1920, Capone’s mentor, mobster Johnny Torrio, invited Capone to join him in Chicago, where he became an influential lieutenant in the Colosimo mob.

Prohibition began while Capone was in Chicago, and as a result, new bootlegging operations opened up. This resulted in him racking up an immense fortune. In 1925, Torrio went into early retirement in Italy after an unsuccessful assassination attempt, which essentially gave Capone a promotion. He was now the crime king of Chicago.

Capone ran gambling, prostitution, and bootlegging rackets in Chicago and sought to expand his territory by taking down rival gangs. Perhaps Capone is best remembered for his role in the St. Valentine’s Day Massacre on February 14, 1929, when seven men associated with the Irish gangster George “Bugs” Moran, one of Capone’s longtime enemies, were shot to death by several different men dressed as policemen. Although this crime remains unsolved and could never officially be linked to Capone, he has generally been considered responsible for orchestrating the attack. 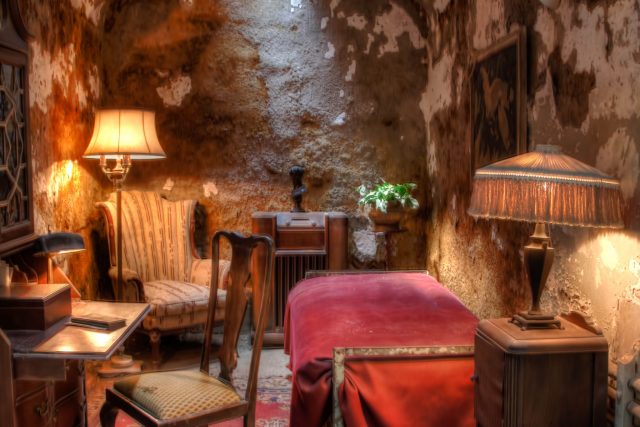 Out of all of Al Capone’s notorious crimes, including 5,000 violations of the Volstead Act, he was thrown in jail for tax evasion. However, regardless of what his charges were, the authorities had finally caught this infamous mobster.

Capone was sentenced to 11 years in federal prison and first served time at the Federal Penitentiary in Atlanta. Despite strict convictions from the courts, Capone bribed the guards at the Atlanta Federal Penitentiary to get amenities that other prisoners were not privy to. 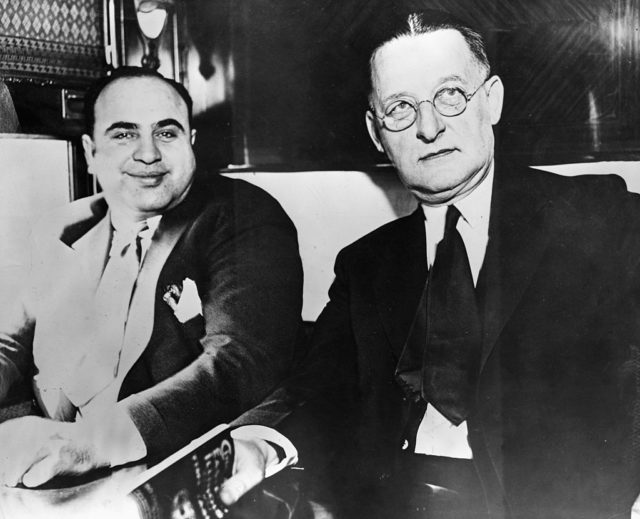 During his stay in Atlanta, Capone supposedly was able to get a number of different guards to work for him. His cell was furnished with expensive trimmings, including personal bedding, carpet, and a radio. Many of the guards would sit with Capone to listen to their favorite radio shows. Furthermore, Capone was given unlimited access to the warden at the Atlanta Federal Penitentiary and was said to always have a large amount of cash on hand, hidden in his cells so he could “tip” guards who would help him out. 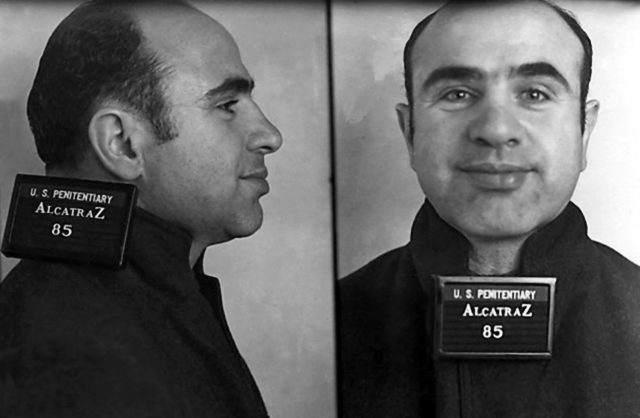 In August of 1934, Al Capone was relocated to America’s newly opened Alcatraz Island Federal Penitentiary without any formal notice. Upon arrival, the gangster immediately attempted to finesse the prison system, just as he had done in Atlanta. According to Warden James Johnston, Capone made several attempts to con Johnson into allowing him special privileges during his stay at Alcatraz, but all advances were denied. The harsh reality hit Capone hard, and he reportedly told Johnston that “it looks like Alcatraz has got me licked.”

Capone was treated just the same as any other inmate at Alcatraz, which often meant conflicts with other inmates. For instance, while Capone was working in the prison basement, he was stabbed with a pair of shears by an inmate who was waiting in line for a haircut. This stint landed Capone in the prison hospital for a few days before eventually being released. 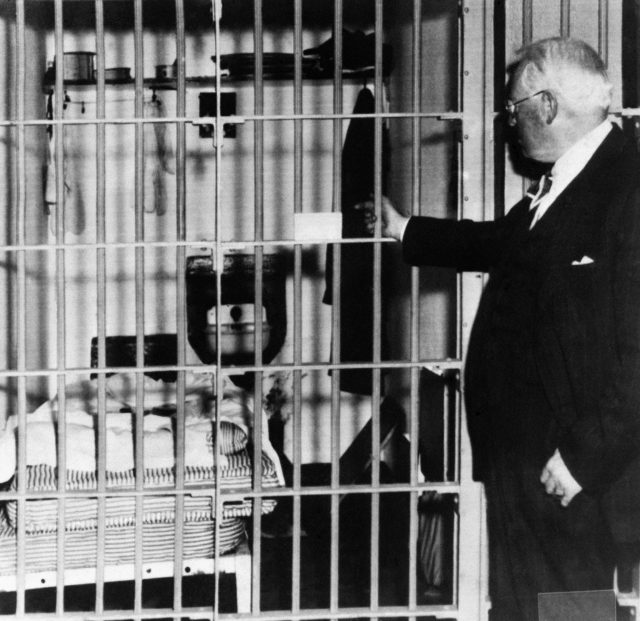 Alcatraz wasn’t all that terrible for Al Capone, though. In fact, he became so cooperative during his time in the prison that he was permitted to play banjo in the Alcatraz prison band, the self-proclaimed “Rock Islanders.” The band would regularly perform each Sunday for other Alcatraz inmates.

Warden Johnston believed that giving inmates something to look forward to and help them pass the time would keep them from rioting. Inmates received three meals a day, and prisoners could get more servings if they had finished their previous meals. Each inmate had their own cell, which was also safer for inmates and guards. Movies were shown each month for prisoners who exhibited good behavior, and they had access to a 15,000 book library and 75 different magazine subscriptions. 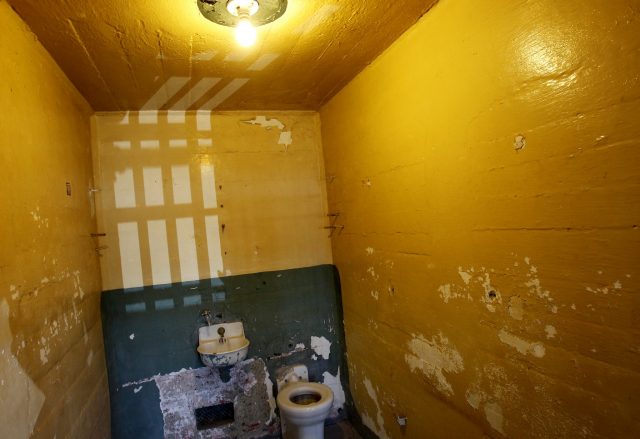 A cell that was once occupied by Al Capone when he was at Alcatraz. (Photo Credit: San Francisco Chronicle/ Hearst Newspapers via Getty Images)

In total, Capone was at Alcatraz for four and a half years. However, during this time he suffered from long-term exposure to syphilis which eventually spread to his brain. He was transferred to Terminal Island Federal Correctional Institution in South California in January of 1939, where he served out the remainder of his 11-year sentence before being released in November of the same year.

Al Capone died of complications from syphilis on January 25, 1947, in his Palm Island mansion. He is buried in Mount Carmel Cemetery in Hillside, Illinois.