Not-So-Funny Facts About The Three Stooges

When it comes to slapping, whacking, and poking, there’s only one team you need to call… the Three Stooges.

The violent and hilarious trio split sides, sometimes literally. How much pain did the Stooges have in their lives? A lot, as it turns out. 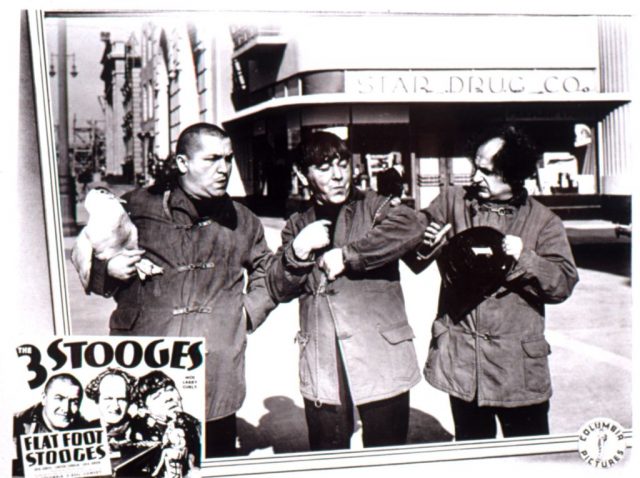 There were hard knocks onscreen for the Stooges. But did you know they had a rough time getting to that point also?

Moses, Jerome, and Samuel Horwitz came from a working-class Jewish background in Brooklyn, New York. The world was later to know them as Moe, Curly, and Shemp, the original lineup. Young Larry Fine (Louis Feinberg) hadn’t met them at that point.

At age 12, Jerome (Curly) had an accident while cleaning a gun. He accidentally opened fire on his left ankle. This is how he got his trademark walk. It was no act!

Incidents described during the Stooges’ early years are shocking. “As a child, Larry lost his brother,” writes List 25, “and his arm was destroyed by acid (at his father’s jewelry shop).”

Meanwhile, Moe had very long hair, because reportedly his mother wouldn’t cut it. A surprising sight back in the early 1900s! This led to ridicule from his peers. Moe was also a scrapper, getting into numerous fights.

How the Three Stooges got started 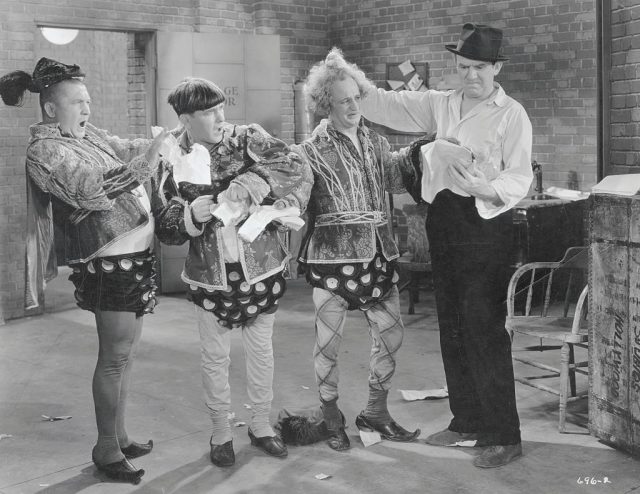 One pal of Moe’s who may have sympathized with him over his predicament was Ted Healy. He and Moe did the rounds as a vaudeville double act in 1922. Natural stage presence Samuel (Shemp) joined soon after, followed by Larry.

This group was called Ted Healy and His Stooges. By 1934, however, the wacky workforce had rebelled against the boss. Healy was out and Jerome was in. The classic team of Moe, Larry, and Curly was up and running! 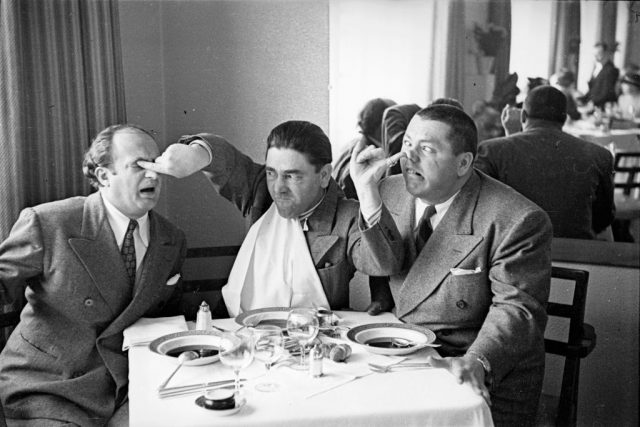 circa 1939: American comedian Moe Howard poking his fellow comedians Larry Fine (left) in the eye while sticking a finger up the nose of Curly Howard. (Photo Credit: Fox Photos/Getty Images)

The big screen beckoned to the Three Stooges, where their particular brand of chaos tickled ribs across America. Larry, Curly, Moe (and later Shemp) starred in 220 films.

Audiences may have winced at signature Stooge moves, such as the legendary eye poke. Mental Floss explains how the socket-bothering bit came about. The setting was a card game. Shemp wasn’t happy. To him, pal Larry was cheating. So, in true Stooge style, he did something about it.

“Shemp stood up and poked Larry in both eyes,” Mental Floss reports. “An observant Moe filed it away for future use onscreen.”

Cracks on the head and other stories 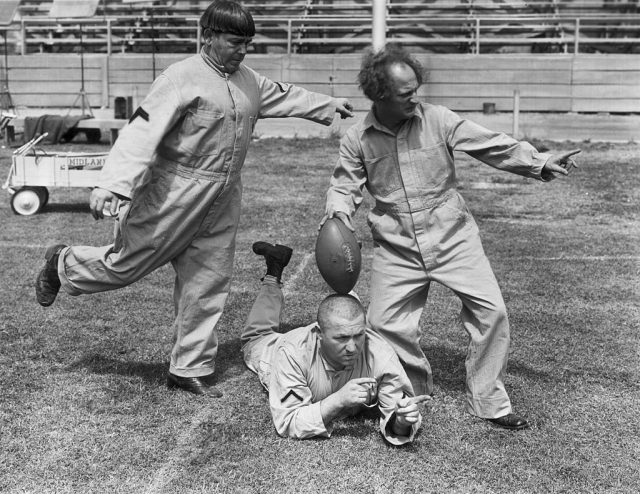 The Stooges were routinely involved in mallet attacks, close shaves with scissors, and the like. Naturally, the studio supplied them with props, right? Wrong. The group wasn’t playing. When the hammer came down, it was the genuine article.

In an infamous story, Curly’s bald head needed to be covered by a wig. He had no less than six stitches after an on-set accident! We guess viewers may have thought they were watching Frankenstein otherwise!

This type of business led to health issues down the line. Curly suffered internal bleeding. According to List 25, he was eventually ruled out of public appearances. 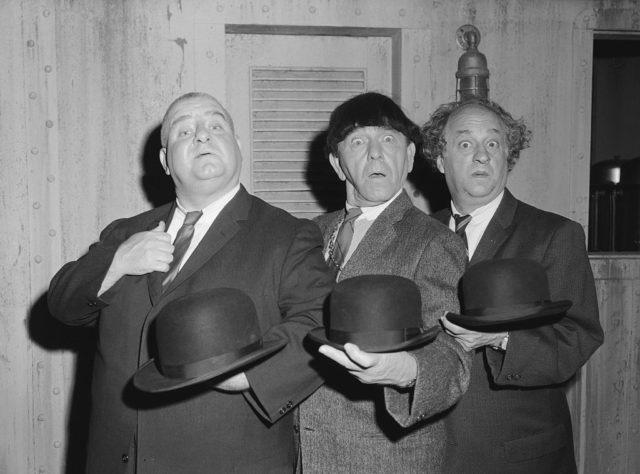 Hollywood: It’s not every movie star who has his teeth extracted by getting hit in the face with a shovel, but then Moe Howard is not every movie star. In fact, he’s hardly any movie star at all. Without Curly Joe De Rita, (L), and Larry Fine (R), who comprise the other two thirds of the Three Stooges, he might find a more accepted means of having his bridgework rearranged. (Photo Credit: Bettmann / Contributor)

You Nazty Spy! (1940) saw the boys take aim at the Führer. The message certainly got through, and Adolf was not impressed. In fact, he reportedly wanted the Stooges to be done away with!

Thankfully, this never came to pass. And there was moe, sorry more, to the production than poking fun. Empire describes how the short was made “in direct defiance” of Tinseltown’s censors. A year after World War II broke out, the “prevailing mood in Hollywood” was they should “play nice and not rock the… boat.”

Their founder was ferocious 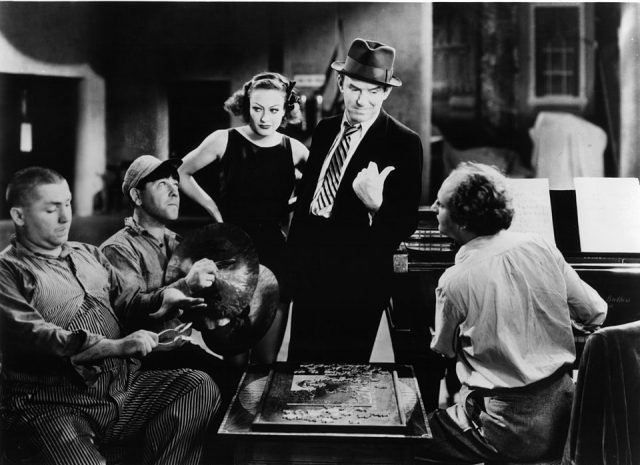 We mentioned Moe and co broke away from Stooges founder Ted Healy. Was it a clean break? Nope. In fact, Healy wanted to break much more than their partnership once they flew the coop.

His aggressive nature came to an explosive conclusion, when he reportedly said he’d blow up theaters hosting the trio!

Empire is keen to point out that Healy was a respected performer in his own right. Would there have been the Three Stooges without him? He “practically invented the style of brutal slapstick that has made them legends.”

A slapstick in the face 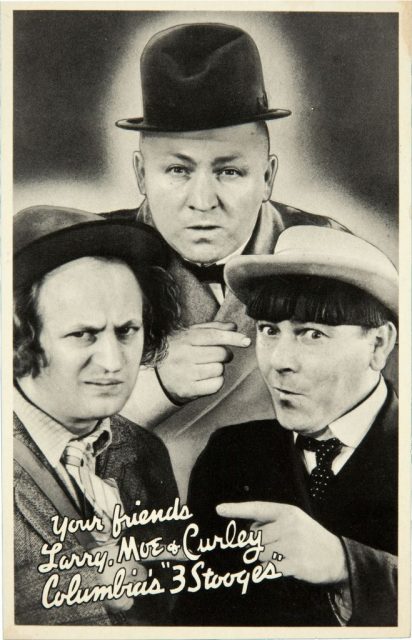 Despite a sizeable contribution to comedy movie history, the Stooges weren’t respected by studio top brass. Their busy period was between the 1930s and 1950s. Columbia Pictures was home to them for much of that time. When they were dismissed, Moe couldn’t even get into the building to say farewell.

With Ted Healy dying in 1937 after arguing with a gangster, the Stooges were all too aware of the city’s seedy underbelly. 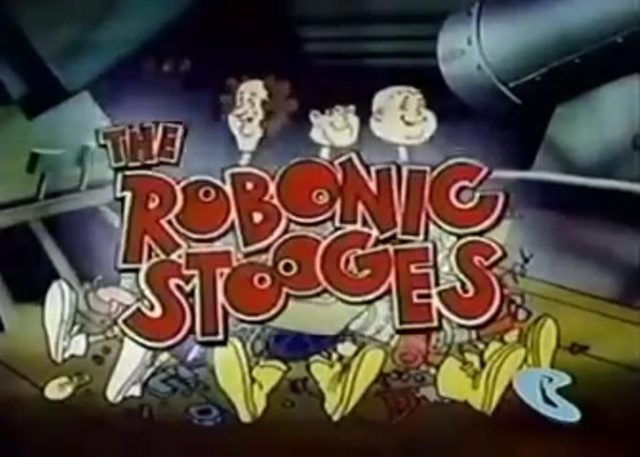 One area the Stooges thrived in was animation. Some of these shows were wacky, even for this bunch! Take The Robonic Stooges, which ran for two seasons between 1977-78. What’s a Robonic Stooge? Well, the concept was more Star Wars than classic slapstick. Cyborg Stooges? It was never going to catch on…

Later life for the Three Stooges 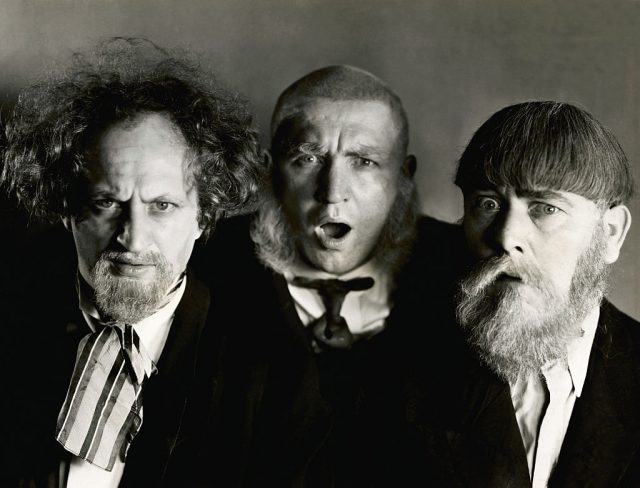 Moe, Larry, Curly, and Shemp were the main Stooges. The latter stepped in when Curly bowed out for health reasons in 1946. He died in 1952.

While it’s felt the team didn’t get the recognition they deserved in their heyday, things certainly looked up toward the end. By 1970, a TV show was in the offing. Sadly, Larry’s health put him out of action. He died in 1975, the same year as leader Moe.

There’s Something About Stooges 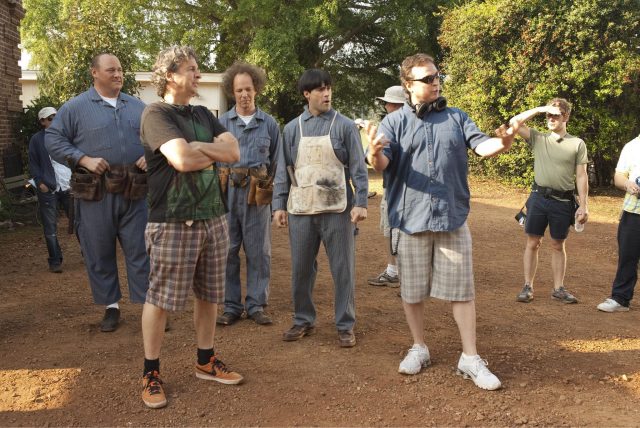 The Three Stooges returned to big screen glory in 2012. Moe Howard and his merry men may have been deceased for decades, but the Farrelly Brothers (There’s Something About Mary) wanted to pay fulsome tribute.

More from us: The Mule That Made The Marx Brothers Famous And Other Tales Told On The Hoof

Sean Penn, Jim Carrey, and Benicio del Toro were in the frame as Larry, Curly, and Moe. Eventually, the project was completed with Sean Hayes (Will & Grace), Will Sasso, and Christopher Diamantopoulos. It made over $50 million at the box office, enough to greenlight a sequel.