While its name suggests somewhere pleasant, Love Canal in Niagara Falls is anything but. The people are decent and honest. However, behind-the-scenes pollution and negligence formed a deadly cocktail, turning it into one of America’s most shocking destinations.

This friendly neighborhood was famously built on a toxic chemical waste dump. The true extent of the harm inflicted wasn’t discovered for decades and is still debated to this day. How did it come to this…? 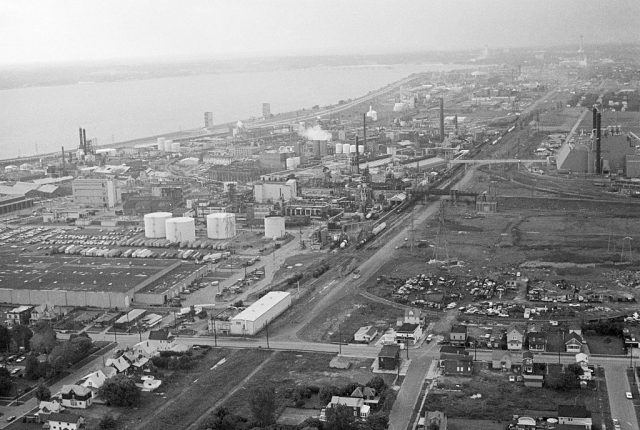 William T. Love was actually the driving force behind New York’s Love Canal. He was an entrepreneur, who in the late 19th century gave rise to the Niagara County hamlet of Model City.

The canal was a major part of his plans for the area. He intended to create a water source, thus generating an affordable power supply. It would run between the upper and lower Niagara Rivers.

Hydroelectricity may have been Love’s goal, but this fizzled out. Why? Love wanted to use river water to fill his canal. One problem – the water was precious to environmental campaigners, who successfully stopped people from snatching the wet stuff.

On top of this, America’s economy wasn’t flowing in Love’s favor. Work stopped mid-project, leaving a mile-long stretch measuring 50 ft wide and 40 ft deep. Within a matter of decades, the unfinished canal was hosting chemical waste, as reported by Eckardt C. Beck of the EPA. The Hooker Chemical Company took charge. By the 1950s they’d buried the canal and moved on.

The land was offered to the City of Niagara Falls School District for just $1. Atlas Obscura writes that the deal contained “a 17-line disclaimer detailing the nature of the canal’s prior usage.” This removed “any liability for future problems” from Hooker’s doorstep. There was also advice “that the area be sealed off”.

How the community of Love Canal was established on toxic waste 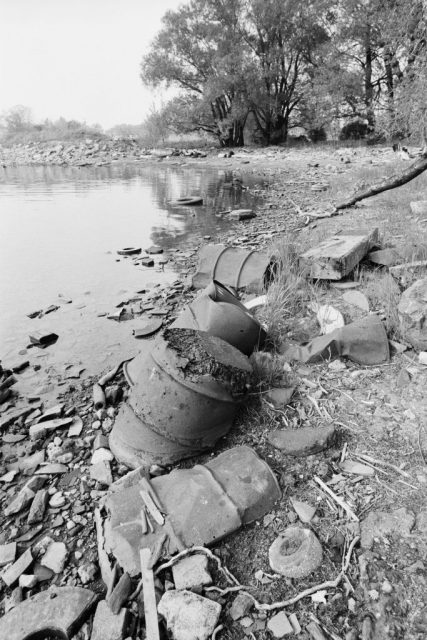 Seven families have already been evacuated from the area of Love Canal where dioxine is feared to have caused ravages like cancer and births of abnormal babies. (Photo Credit: Michel Philippot/Sygma via Getty Images)

These recommendations weren’t heeded. The site’s new owners wanted to build on land which sat on top of a reported 21,000 tons of hazardous waste.

An early hurdle involved the construction of a school. Barrels of toxic material popped up as work began in 1954, so the building was shifted 80 feet to a supposedly safer spot.

A community proceeded to grow on dangerous ground. According to reports, people knew the type of place they were moving to, as houses went up and folks settled in. However, they couldn’t have predicted the future horrors to come. Heavy rain stirred up the toxic material lying beneath their feet in the 1970s.

How irresponsible was the decision to keep building? In 1979, Beck wrote that the use of landfills to dispose of such waste was okay, as long as it was “properly sited, managed, and regulated.” He observes that Love Canal is “a perfect historical example of how not to run such an operation.” 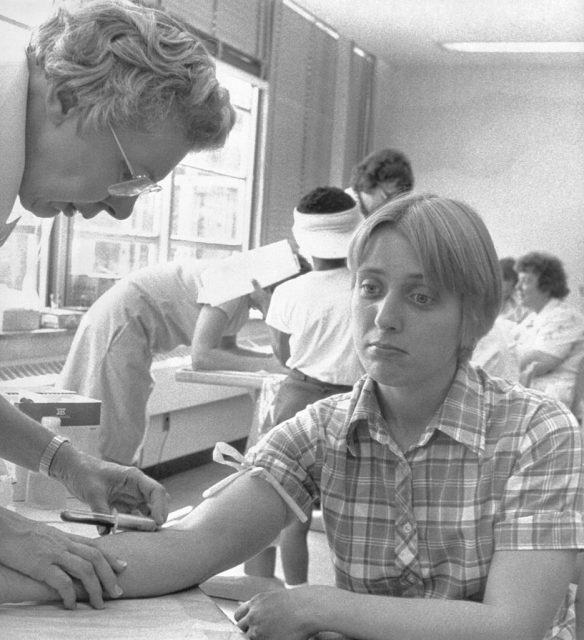 Niagara Falls, New York- A Red Cross nurse takes a blood sample from Maureen Paonessa, 23, at a clinic set up in the 99th Street Elementary School. State Health officials are performing the tests to determine the effects of chemical contamination. Almost 100 families live in the area but officials say 37 families are the most directly affected. (Photo Credit: Bettmann / Contributor)

Sightings of strange-looking puddles in basements surfaced. What was in these pools? Something very nasty. Plus, other alarming things were happening. For example, children were returning home suffering with mysterious burns. The air appeared to be poisoned.

“People who walked in the pools found their shoes burnt through,” reported Jeremy Paxman for the BBC in 1979. He visited the location due to recent worldwide attention, drawn by coverage in the Niagara Falls Gazette and a study by scientist Beverly Paigen.

Birth defects in the community had been traced, and the findings were grim. Slowly and scarily, a picture emerged of a suburb in the midst of an environmental and human crisis. The area would be linked to cancer and other conditions, such as epilepsy and asthma. 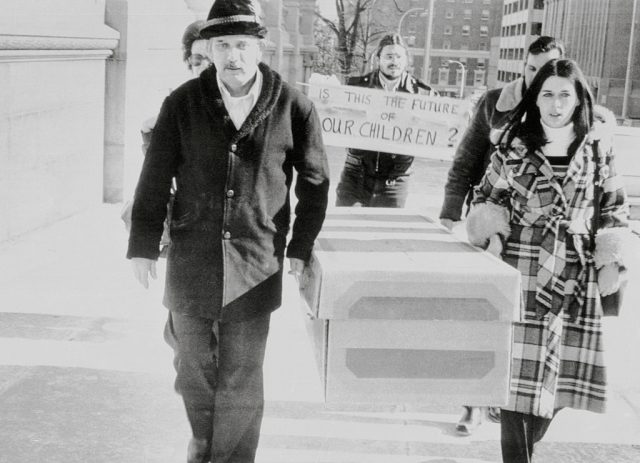 Albany, N.Y.: Carrying caskets followed by signs reading “Is This the Future of Our Children,” residents of the Love Canal area of Niagara Falls told state officials they want New York to expand its relocation effort for persons living near the chemically contaminated site. (Photo Credit: Bettmann / Contributor)

A reported 239 properties were evacuated and the area fenced off. It was clear Love Canal had a catastrophe on its hands. What was the community doing about it? The fightback came from a group unflatteringly dubbed the “hysterical housewives.” In reality, they were the Love Canal Homeowners’ Association.

Led by resident turned activist Lois Gibbs, they engaged in high-profile action. This included the detainment of  EPA employees as hostages. The clamor was growing for something to be done about Love Canal on a national level.

President Carter and what happened next 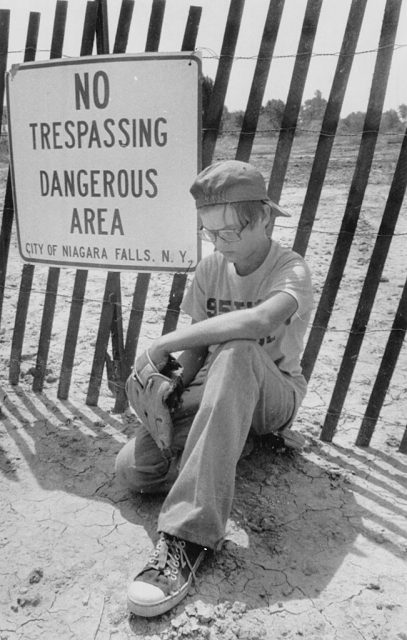 Niagara Falls, N.Y.: Joel Guagliano, 11, sits dejected Wednesday in the Love Canal section of Niagara Falls. Chemicals once dumped in the now-residential area are seeping through the ground and the New York State Health Department has urged some residents to leave the area until the problem can be resolved. (Photo Credit: Bettmann / Contributor)

Buying a home at Love Canal meant a property death sentence. No one wanted to purchase somewhere with such a headline-grabbing reputation. The community was stuck in a terrible trap.

Under then-President Jimmy Carter, houses were bought by the state. It was by far the end of the situation but it was a start. Speaking to the BBC’s Witness History, former resident Luella Kenny believes the story shows “you can actually fight government and you can win.”

The CERCLA Act of 1980 (Comprehensive Environmental Response, Compensation and Liability) was passed by Congress. Also referred to as the Superfund Act, it aimed to address voters’ worries about toxic waste. Cleanup work at Love Canal took till 2004, though controversies still remain.

Tragically, Love Canal is not an isolated case. Even back in the late 1970s, Beck mentions other dumping sites, or as he puts it, “time bombs with burning fuses. 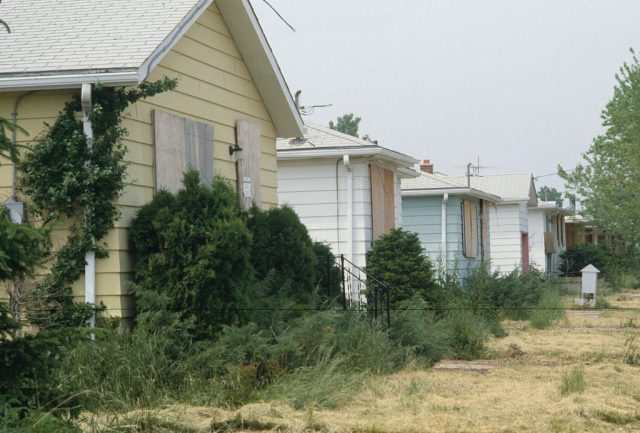 Abandoned houses in the Love Canal district of Niagara Falls. The actual Love Canal, a failed 19th Century canal attempt, was used in the early 20th Century as a landfill for chemical waste by various parties. In the 1970s it became clear that it posed a serious health problem, forcing the state government to evacuate the entire neighborhood. (Photo Credit: Bettmann / Contributor)

The Hooker Chemical Company became defunct in 1968, after being acquired by Occidental Petroleum. In 1995, $129 million was paid out in restitution by Occidental, following legal action by the EPA.

In 2013, the New York Post reported on fresh complaints about contamination at Love Canal. Glenn Springs Holdings (part of Occidental) stated that “the containment system is operating as designed and is protective of health, safety and the environment.”

Others disagreed, not least of which was Lois Gibbs. She described the suburb as “like a gated community for chemicals.”

At the time of writing, Love Canal is largely uninhabited. It’s referred to as a ghost town, though powerful echoes of its toxic legacy are still felt.