There’s nothing we love more than spotting Easter eggs in historical films. Here, we found eight Easter eggs hidden in iconic films that even the most knowledgeable history buffs probably missed the first time watching!

1. This Titanic scene is based on a real photo 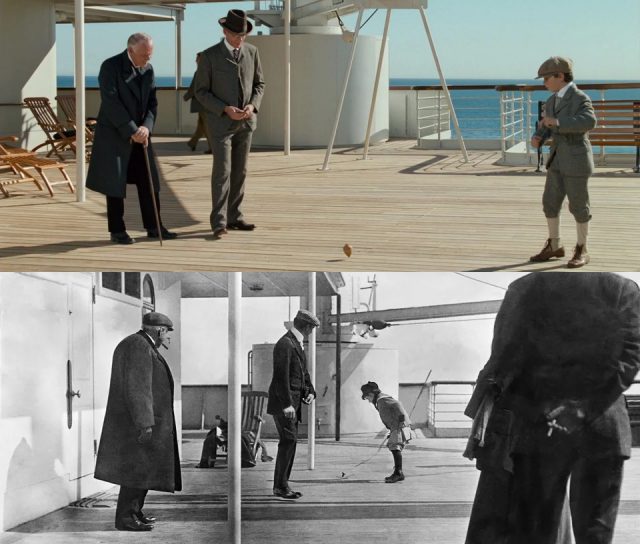 James Cameron went to great lengths to ensure that his 1997 movie, Titanic, was as historically accurate as possible (other than the love-story part). One way Cameron did this was by placing historical Easter eggs throughout the entire film. One of these is based on a real photo taken aboard the Titanic before it sunk.

In the scene, viewers see a young boy on deck playing with a spinning top. This brief scene is based on the real-life photo of first-class passenger Frederic Spedden and his six-year-old son Douglas.

The photo survived the sinking because the individual who took it didn’t actually stay onboard the ship. It was snapped by a Jesuit priest named Francis Browne, who departed the ship at its stop in Queenstown, Ireland. Both Frederic and Douglas Spedden survived the sinking of the Titanic, but Douglas would tragically be killed three years later after being hit by an automobile. 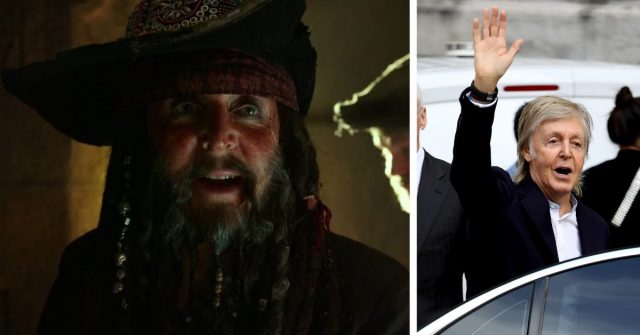 If there’s one thing we love more than Easter eggs in historical movies, it’s cameos. Paul McCartney’s cameo appearance in the 2017 installment of the Pirates of the Caribbean franchise provides us not only with a glimpse of one of our favorite stars, but also a relatively unknown Easter egg.

McCartney played Jack Sparrow’s “Uncle Jack” in Pirates of the Caribbean: Dead Men Tell No Tales. The two are reunited in a dungeon when Jack Sparrow (Johnny Depp)  is captured and brought in, while Uncle Jack was already a prisoner in the cell.

Jack Sparrow recognizes his relative after hearing him sing “Maggie May.” This is a traditional Liverpool folk song dating back to the 1800s. If McCartney’s cameo wasn’t enough, the Beatles famously recorded their own rendition of the original song and included it on their 1970 album Let It Be.

Apollo 13 recounts the events of the 1970 attempted lunar mission. Tom Hanks played astronaut Jim Lovell, who actually makes a surprise appearance in the film. In Apollo 13, the real Jim Lovell plays the captain of the recovery ship, the USS Iwo Jima.

In the movie, director Ron Howard had intended to make Lovell an admiral, but Lovell had refused. He wanted to portray the actual rank he had achieved when he retired from the Navy. In addition to his cameo appearance, Jim Lovell also wore his old Navy uniform.

4. The importance of The Scions of Shannara in The Big Short 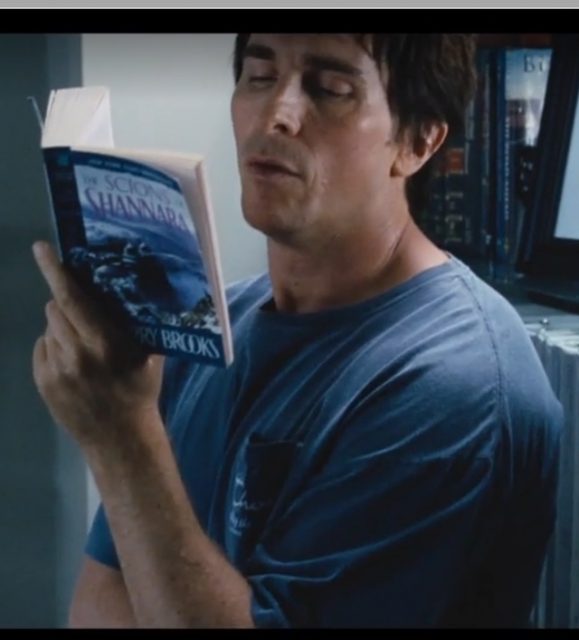 Christian Bale reading The Scions of Shannara in The Big Short. (Photo Credit: MovieDetails via Reddit)

The Big Short is a 2015 movie based on the book The Big Short: Inside the Doomsday Machine, written by Michael Lewis. The movie (and book) is set during the global financial crisis of 2007-2008, and focuses on four men who were able to predict the housing market crash, and from their predictions, were able to make a profit.

This connection is an often overlooked Easter egg that is present in the 2013 rendition of The Great Gatsby. In F. Scott Fitzgerald’s 1925 novel, The Great Gatsby, Daisy tells Jay Gatsby that he “always looks so cool. You resemble the advertisement of the man.”

Although this passage is very vague in the book, and could literally refer to any advertisement for any man in the 1920s, Gatsby scholars have hypothesized that the advertisements that Daisy was referring to were actually Arrow Collar ads from the 1920s. In a Historical Guide to F. Scott Fitzgerald, Kirk Cunnett argues that “the advertising icons Daisy has in mind is likely the Arrow Collar Man, the ultimate 1920s symbol of ‘cool.'” In the context of the book, and since Daisy is referring to how cool Jay is, this makes sense.

The 2013 movie makes reference to this connection. In the movie, Nick Carraway meets Jordan Baker for dinner on the terrace of a building in Times Square. In the background of this scene, an advertisement for Arrow Collars is very clearly in the background.

Saving Private Ryan is largely considered one of the best war movies of all time. In fact, the movie is so accurate that after it was released, The Department of Veterans Affairs had to increase staffing on its telephone counseling line in response to a surge in support needed for World War II veterans.

One of the first scenes in the movie that contains an Easter egg is relatively early on. After the Omaha Beach invasion, two soldiers surrender to the Allied forces. However, the Allies believe that the soldiers are speaking German and they are killed on the spot.

What makes this scene even more heartbreaking is that these soldiers weren’t German at all, rather they were Czech. When the dialogue is translated, it turns out that the two soldiers were pleading “Please don’t shoot me! I am not German, I am Czech, I didn’t kill anyone! I am Czech.” Since these two soldiers were Czech, it is likely that they had been conscripted into the German army when Czechoslovakia was conquered by Germany in 1939. This Easter egg in particular shows how brutal war is.

7. We missed this Saving Private Ryan reference in Catch Me If You Can 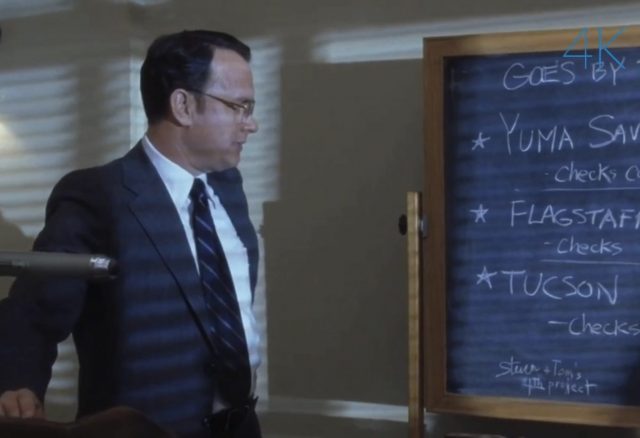 Tom Hanks in Catch Me If You Can. (Photo Credit: MovieDetails via Reddit)

Speaking of Tom Hanks and Steven Spielberg projects, did you catch this Easter egg in the 2002 movie Catch Me If You Can? At the end of the movie, there is a blackboard that Carl Hanratty (Tom Hanks) is writing on. If you look closely, you can see the words “Steven + Tom’s 4th Project” written on the lower-left corner of the chalkboard.

This Easter egg is in reference to the fourth movie that Hanks and Spielberg worked on together. The other three movies were The Money Pit, Joe Versus The Volcano (which Spielberg produced), and Saving Private Ryan (which Spielberg directed).

8. All Quiet On The Western Front reference in 1917 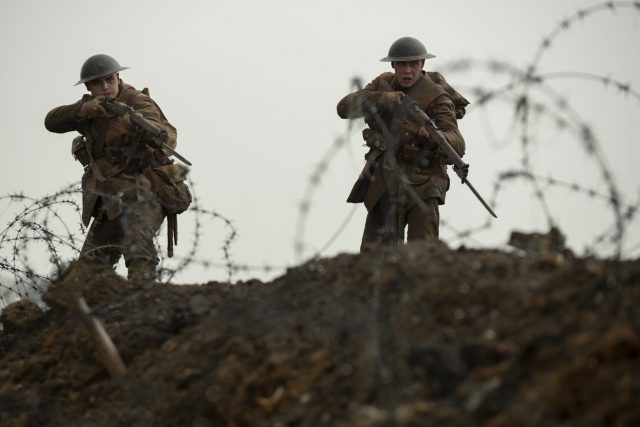 The film 1917 tells the story of two soldiers, Will Schofield and Tom Blake, who are on a mission to deliver an important message to call off a doomed Allied offensive attack during the First World War. In the movie, Will Schofield encounters two German soldiers who are named Baumer and Muller.

« Sword Dating Back to the Crusades Discovered At the Bottom of the Mediterranean Sea
Max Factor: The Man Behind The Brand Left A Lasting Mark On Classic Hollywood »