A sword believed to date back to the Crusades has been discovered at the bottom of the Mediterranean Sea, off the northern coast of Israel. An amateur diver found the marine life-encrusted relic during an excursion on October 16, 2021, and has since handed it over to the Israel Antiquities Authority (IAA). 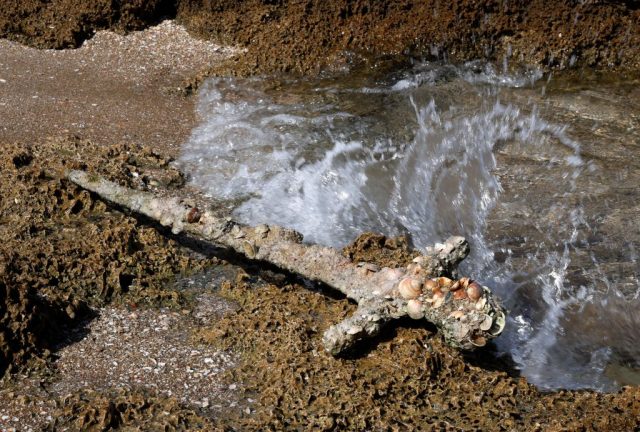 Shlomi Katzin was diving near the port city of Haifa, along the Carmel coast, when he noticed the sword among stone and metal anchors. Concerned other divers might find and disturb the sword before the IAA could examine it, he brought it ashore and took it to the organization’s Robbery Prevention Unit’s northern district office. It was then handed over to the National Treasures Department.

For turning the weapon over to the IAA, Katzin was awarded a certificate of good citizenship. 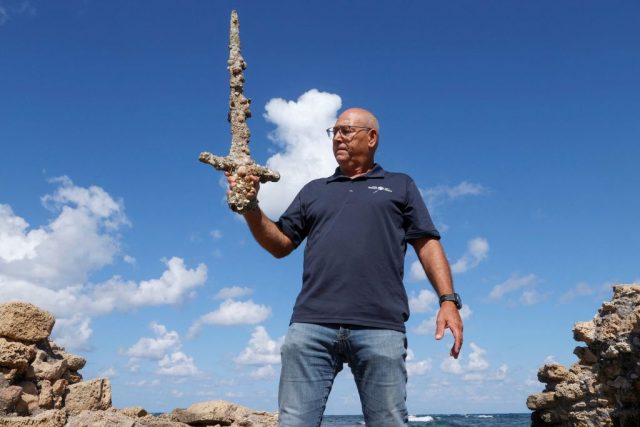 According to researchers with the IAA, the sword’s location, some 600 feet from the coast, suggests it was a Crusader’s weapon, as such forces were known to travel. Muslim forces, on the other hand, were known to build coastal fortifications but did not travel by sea themselves.

The approximate age of the find is estimated to be around 900 years old, and it’s believed to be connected to the nearby Crusaders’ citadel at Atlit. While encrusted with marine life, researchers have been discerned it was used during the era based on its basic shape, as the Crusaders and their Muslim opponents used straight swords.

It’s likely that shifting sands at the bottom of the seafloor uncovered the sword, which features a meter-long blade, 30 centimeter-long hilt, and handle. 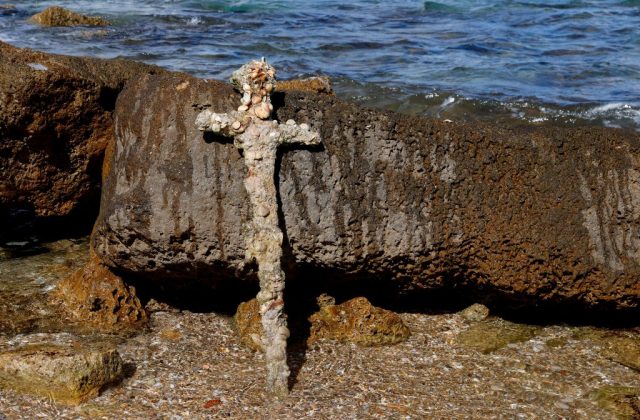 The Crusades began in 1095 and lasted until the 13th century. It saw leaders of various European nations and the Roman Catholic Church send warriors – Crusader armies – to the Middle East to take back control of areas considered holy to Christians, including Jerusalem.

After Muslim sultan Saladin took back the Holy City from the Crusaders in 1187, England’s King Richard I led an army against him, sailing along the Israeli coast from Acre to Jaffa. In the end, Richard’s forces were successful.

“It’s heavy because of the stones that are glued to it and also because it’s [an] iron sword and very big,” said Kobv Sharvit, director of the IAA’s marine archaeology unit. “That means that the guy that held this sword and [fought] with it was very strong.

“I’m trying to imagine him on the field with all the armour on him and the sword and fighting with it. He should really be in good fitness, maybe they were bigger than us today but definitely stronger. And it’s amazing,” he added. 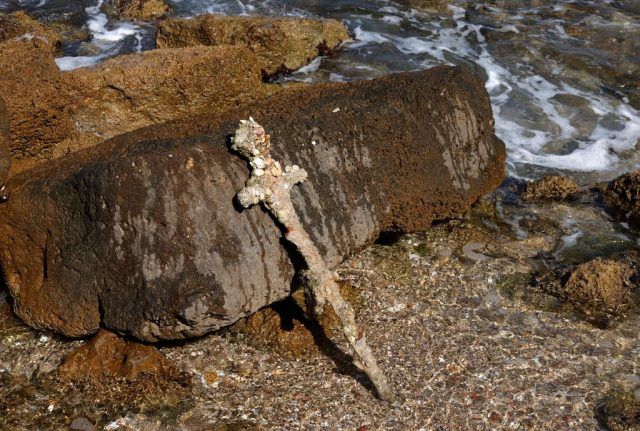 The area where the sword was located is a natural cove used as a shelter by those who traveled the seas, according to Sharvit. It’s known for its rich archaeological finds, and has been of interest since June 2021.

“The Carmel coast contains many natural coves that provided shelter for ancient ships in a storm, and larger coves around which entire settles and ancient port cities developed,” he said. “The discovery of ancient finds by swimmers and leisure divers is a growing phenomenon in recent years, with the increasing popularity of these sports.

“Even the smallest storm moves the sand and reveals areas on the seabed, meanwhile burying others,” he continued. “It is therefore vitally important to report any such finds and we always try to document them in situ, in order to retrieve as much archaeological data as possible. The archaeological finds at the site show that it served as a small, temporary anchorage for ships seeking shelter.”

It’s believed the location was used as a natural anchorage as early as 4,000 years ago, during the Late Bronze Age. 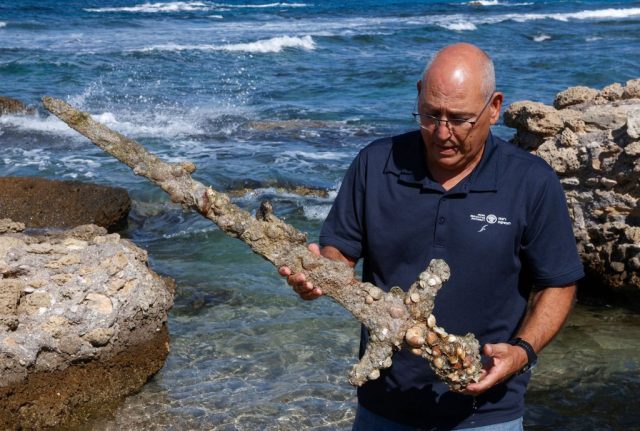 More from us: Remains of Medieval Soldier Found With Sword & Knives in Lake

According to Eli Escosido, the general director of the IAA, the sword will be cleaned and put on display:

“Every ancient artifact that’s found helps us piece together the historical puzzle of the land of Israel. Once the sword has been cleaned and researched in the Israel Antiquities Authority’s laboratories, we will ensure that it is displayed to the public.”

« Did You Know Elves in Iceland Prevented a Road from Being Built for Eight Years?
8 Easter Eggs Hidden In Plain Sight In Iconic Historical Movies »