Guinness World Records have been around since 1955, and throughout those many decades, it has never failed to find people (or animals) that have amazing, and sometimes shocking, abilities. We’ve found 10 outrageous Guinness World Records that people really worked hard to earn, and they make us question what our own talents are.

1. Raven the chimpanzee was the most successful chimp on Wall Street 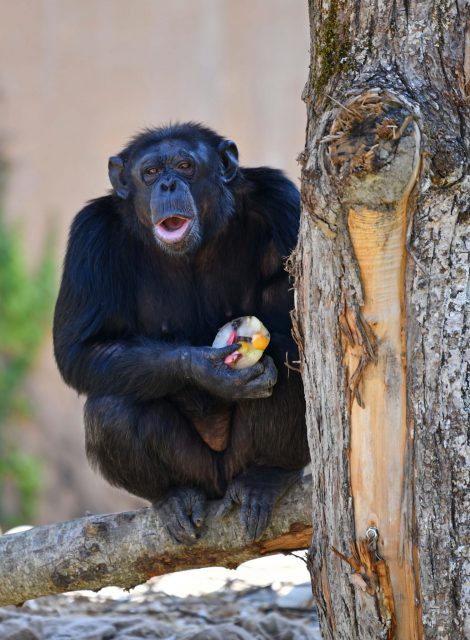 This not Raven, rather a chimpanzee in an Italian zoo. (Photo Credit: Xinhua News Agency/ Getty Images)

In 2009, Raven the chimpanzee appeared in the Guinness Book of World Records as the “Most Successful Chimpanzee on Wall Street.” She chose her stocks by throwing darts at a list of 133 internet companies. This tactic must have worked well as Raven was the 22nd most successful money manager in the United States.

Raven created her own index called “MonkeyDex.” In 1999, MonkeyDex delivered a 213% gain, outperforming more than 6,000 professional brokers on Wall Street. However, Raven’s luck eventually ran out, and by 2000, MonkeyDex was down 34%.

2. A comedian holds more Guinness World Records than anyone else in Japan

Some of his stranger records include “most dried peas moved using a straw in 30 seconds,” in which Mr. Cherry moved 29 peas total in 2014. He also holds the record for “fastest 50 meter running on all fours- backwards,” which he was able to do in 20.45 seconds in 2015.  He also crushed 71 walnuts in 30 seconds by sitting down on them in 2019. One thing is certain – Mr. Cherry is a man of many talents! 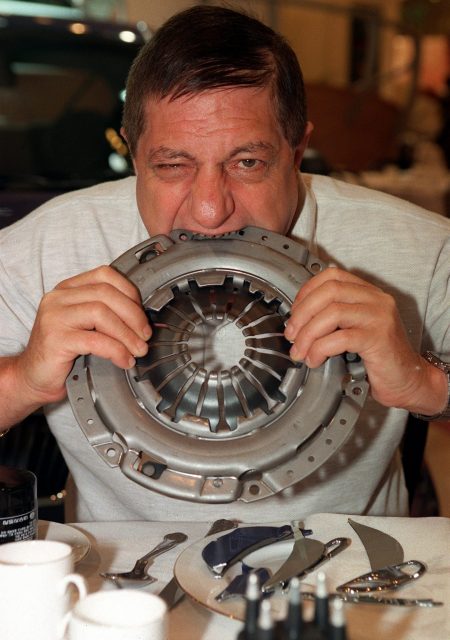 French entertainer Michel Lotito holds the Guinness World Record for the “strangest diet” – an extremely fitting record for him. In his lifetime, Lotito consumed 18 bicycles, 15 supermarket trolleys, seven television sets, six chandeliers, two beds, a pair of skis, a Cessna 150 aircraft, a computer, and an entire coffin – handles and all.

For his strange diet, Guinness World Records awarded him a brass plaque, which he, of course, ate. By 1997, Lotito had eaten nearly nine tons of metal. He was able to consume these typically indigestible objects because he had an extremely thick lining in his stomach and intestines, which allowed him to consume sharp metal objects without injury. However, this also meant that soft foods made him feel sick. Lotito passed away in 2007 from natural causes.

4. Ashrita Furman has a Guinness World Record for having the most world records 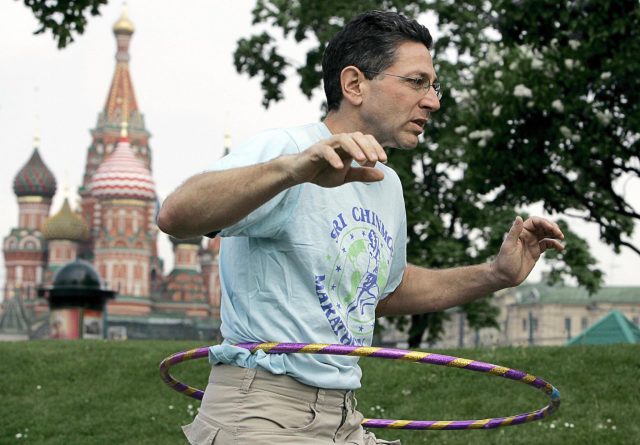 Is getting the Guinness World Record for the most Guinness World Records the ultimate record? We certainly hope the answer to this question is yes for Ashrita Furman’s sake! As of 2017, Furman had set more than 600 official Guinness Records, and currently holds over 200 Records.

Furman has been breaking world records since 1979, when he did 27,000 jumping jacks in six hours, 45 minutes. Some of his other records include fastest mile on a pogo stick, longest time to hula hoop underwater, and greatest distance traveled on a bicycle balancing a milk bottle on the head. Not only does Furman continue to set new records, he also works hard to take back the records others have taken from him.

5. The Wolf of Wall Street holds the Guinness World Record for the most swearing in one film

This Guinness World Record may seem obvious for those who have seen The Wolf of Wall Street. Martin Scorsese’s 2013 film drops the f-word a total of 506 times– an average of 2.81 times per minute. Interestingly enough, Scorsese broke his own record. Prior to the release of The Wolf of Wall Street, Scorsese’s 1995 movie Casino held the movie swearing record with the f-word being dropped 422 times, or 2.4 times per minute.

6. The longest wedding veil is longer than 63 football fields

A woman named Maria Paraskeva achieved two major milestones in August 2018 – one being getting married and the other achieving her lifelong dream of having the world’s longest wedding veil.

Paraskeva’s veil measured 6,962.6 meters, or 22,843 feet, 2.11 inches. In other words, the veil was about as long as 63.5 American football fields. It took three months to create and deliver the final veil to Maria in her hometown of Larnaca, Cyprus.

7. The greatest mouser of all time is, obviously, a cat 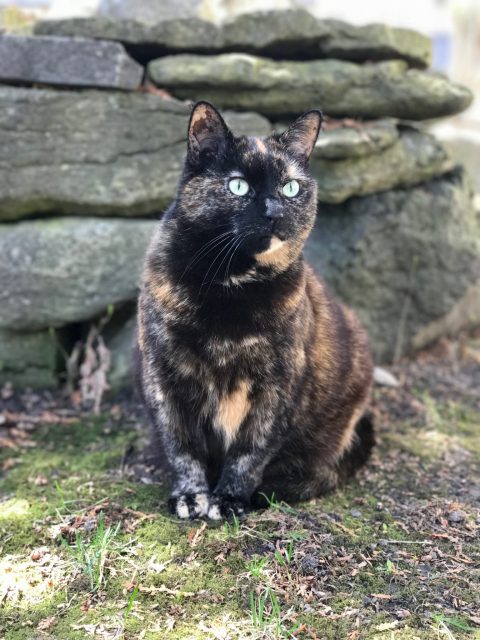 The second animal on our list to hold a Guinness World Record is a female tortoiseshell cat named Towser. Towser holds the Guinness World for the “greatest mouser” with a solid count of  (an estimated) 28,899 mice. Towser averaged three mice a day until her death in 1987.

8. Who knew there is a record for walking barefoot over Lego?

On May 1, 2021, Salacnib “Sonny” Molina, who resides in Woodstock Illinois, walked 8,898.9 meters, or 29,195 feet, 10.39 inches barefoot over Lego pieces. In doing so, he broke the previous Guinness World Record for walking barefoot over Lego, which he also held.

Salacnib Molina also holds the Guinness World Record for most barefoot half marathons run on consecutive days. Each day, Sonny gets up and runs anywhere from three to six miles on gravel trails and concrete paths – completely barefoot.

9. The highest fall without a parachute is a world record we never want to have 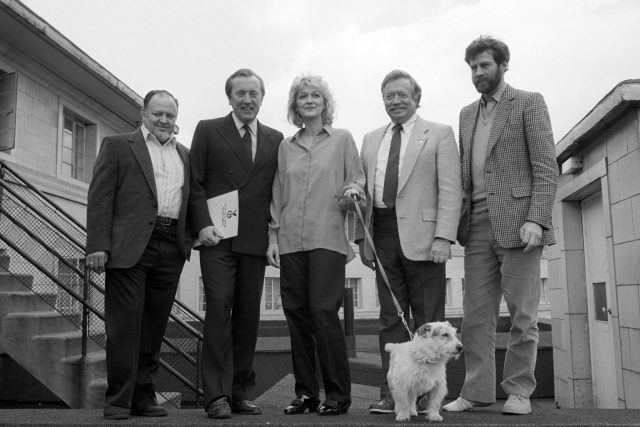 Vesna Vulovic is the current Guinness World Record holder for surviving the highest fall without a parachute. On January 26, 1972, Vesna was working as a flight attendant onboard JAT Yugoslav Airlines 367 when a bomb exploded mid-flight. Vesna was thrown from the plane without a parachute, and survived a fall from 10,160 meters, or 33,333 feet over SrkskÃ¡ Kamenice, Czechoslovakia (now Czech Republic). Vesna was the only survivor of this plane crash.

She was in the hospital for a total of 16 months after waking up from a 27-day coma. Despite having many broken bones, she made a full recovery aside from a small limp.

10. The individual who holds the record for blowing up the most balloons has globophobia (fear of balloons) 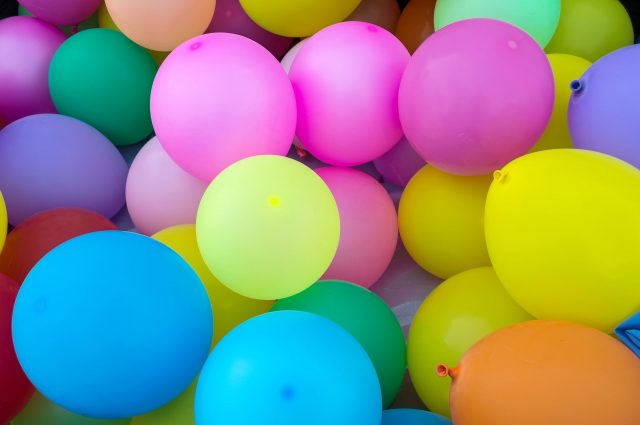 In September, 2015, Hunter Ewen of Allenspark, Colorado, broke his own record of most balloons blown up in one hour by an individual by blowing up 910 balloons in 60 minutes. Interestingly enough, Ewen previously dealt with globophobia, which is a fear of balloons.

Hunter Ewen believed that setting the record for most balloons blown up in an hour would help him overcome his fear of balloons. He trained to achieve this record by blowing up balloons for longer periods of time without getting light-headed. As it turns out, people get light-headed by having too much oxygen, rather than having a lack of oxygen.

« Thanks To Princess Diana, Prince William Will Be The First Descendant Of Charles II To Sit On The Throne
Andy Warhol Sketch Worth $20K Sells Amid Collection of 999 Forgeries »