Archeologists have discovered the remains of a once-elaborate Aztec altar near Plaza Garibaldi in the historic center of Mexico City.

In 1521, Hernan Cortes and the Spanish army conquered the Aztec capital of TenochtitlÃ¡n. The battle lasted a total of 93 days, with Cortes’s victory destroying the Aztec Empire.

The altar dates back to the 16th century, likely within 1521 and 1610. It was located in a courtyard inside the home of an Aztec family. According to experts, the family would have used the altar to honor their dead.

Multiple artifacts associated with the altar were found at this site. Archeologists also uncovered 13 incense burners, five bowls, a cup, a plate, and a pot with bone remains (human ash).

The archeologists who made the discovery believe that the inhabitants of the house would have held a ritual at the altar to “bear witness to the ending of a cycle of their lives and of their civilization.”

Archaeologist Mara Becerra tells us that the altar was found 13 feet (or four meters) below the ground. The house surrounding the altar was once made up of a large room, connected by a corridor to five smaller rooms. One room is believed to have been a kitchen, as there is evidence of a tlecuilli or stove that measures about four meters by three meters. 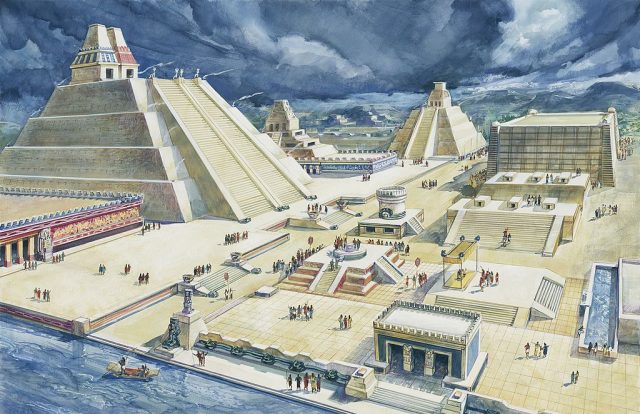 Mara Becerra stresses that altar and items found with it “allows us to interpret this archeological context as evidence of an offering that was arranged in the first decades after the invasion of Tenochtitlan, as part of a ritual of closure of the same space, an essential act for the Tenochca worldview.”

More from us: House Hernan Cortes Built on Top of Aztec Palace Unearthed in Mexico City

The discovery of this altar coincides with the 500-year anniversary of the Spanish Conquest. President AndrÃ©s Manuel LÃ³pez Obrador has called on both Spain and The Vatican for historic reconciliation for their role in the colonization of South America.

« How Exactly Did a 19th Century Surgeon End Up With a 300% Mortality Rate?
Did This Sporting Mishap Have a Right Royal Effect on King Henry VIII? »