Clara Barton is known to many as a nurse from the Civil War battlefields who earned the name of “the Angel of the Battlefield.”

But both before and after she stepped into nursing (something she excelled at without any formal qualifications), she fought sexism at every turn, helped distraught relatives locate the bodies of missing soldiers, established the American Red Cross, and undertook many other amazing things.

Named after a heroine in distress 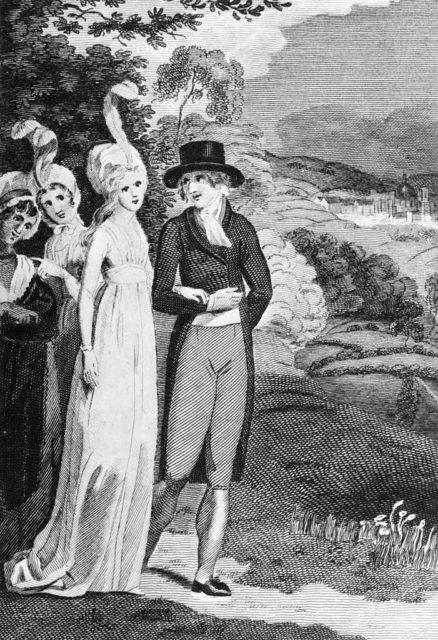 Clarissa Harlowe and Robert Lovelace take a stroll through Hampstead, circa 1740. An illustration from an early 19th century edition of the 1748 epistolary novel ‘Clarissa, or, the History of a Young Lady’, by Samuel Richardson. (Photo Credit: Hulton Archive/Getty Images)

Born on December 25, 1821 in North Oxford, Massachusetts, Clarissa Harlowe Barton (known as Clara) was named after the novel Clarissa by Samuel Richardson.

However, unlike the poor heroine of the book who was obsessively controlled by her family and thwarted at every turn, Clara set out to show the world just how useful and proactive she could be.

So shy she wouldn’t eat 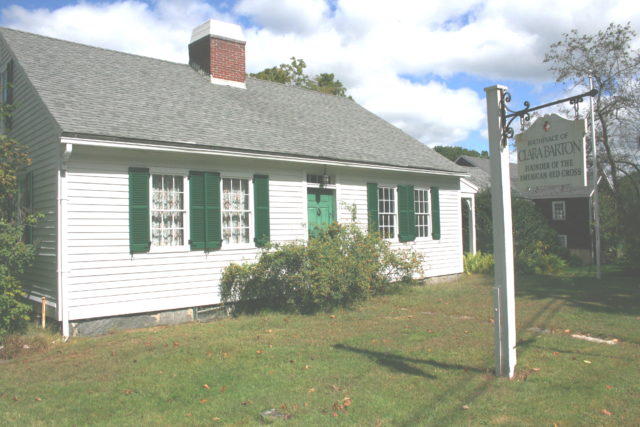 Although Clara excelled at reading and spelling when she went to school with her brother, Stephen, she was so painfully shy that she only had one known friend: Nancy Fitts.

To try and cure her of this reticence, her parents sent her to Colonel Stones High School, but Clara hated it. So great was her misery that she stopped eating, so she was brought home again.

Her shyness – and a phrenologist – convinced her to become a teacher 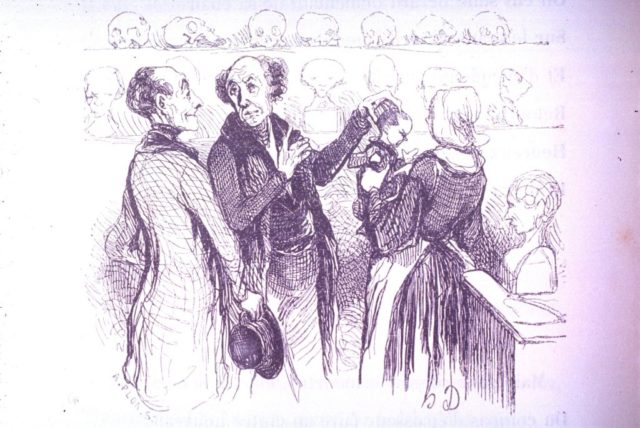 A phrenologist examines the head of a child in the arms of a woman, 1840. Courtesy National Library of Medicine. (Photo Credit: Smith Collection/Gado/Getty Images).

In a further effort to combat her shyness, her parents nudged her toward being a teacher. She might also have been influenced by a visiting phrenologist, who declared in 1836 that she had the skull of an educator.

Clara excelled as a teacher. Having been brought up playing with her boisterous brothers as well as socializing with a more refined female cousin, she was able to supervise and guide all the children in her care.

She founded the first free school in New Jersey 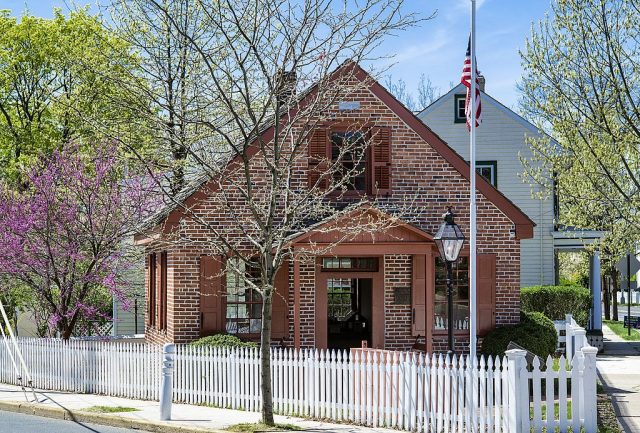 She worked as a teacher in Hightstown, Barton, but noticed there was no school in neighboring Bordentown. In 1852, she decided to open a free school – the first in New Jersey. It was such a success that she recruited another woman to help her teach over 600 pupils. 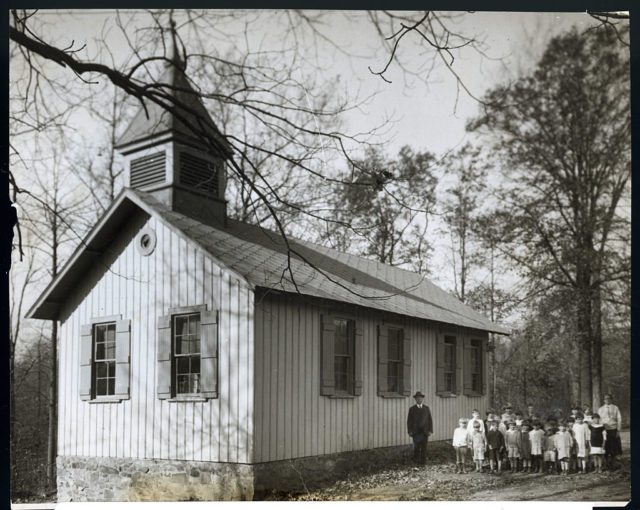 Clara was teaching at a time when teachers were normally men. The school board wanted to pay her a low salary for working both winter and summer. Clara refused, stating: “I may sometimes be willing to teach for nothing, but if paid at all, I shall never do a man’s work for less than a man’s pay.”

She won the argument and was given equal pay.

She was removed as school principal and replaced by a man 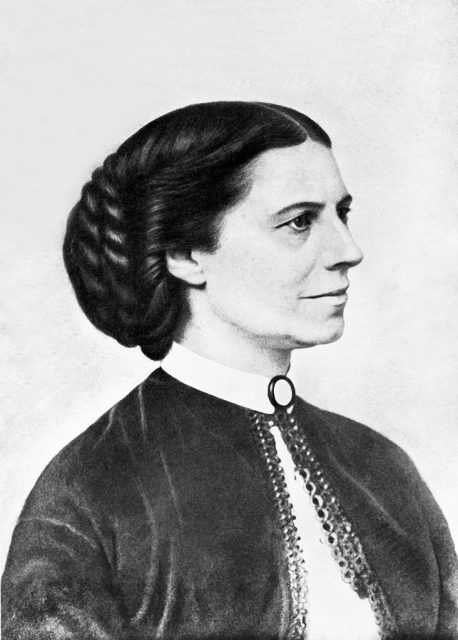 A portrait of nurse, educator and founder of the American Red cross, Clara Barton, taken during the Civil War and authorized by her as the one she wished to be remembered by, circa 1865. (Photo Credit: Underwood Archives/Getty Images)

Unfortunately, the school’s success was Clara’s eventual downfall. Once the establishment had flourished under her guidance, the school board didn’t think that such a large institution should be headed by a woman, so they replaced her as principal with a man.

The new principal was not impressed by Clara’s rhetoric of equal pay and wanted to slash her salary so she only earned half of what he did. She quit.

One of the first female patent clerks 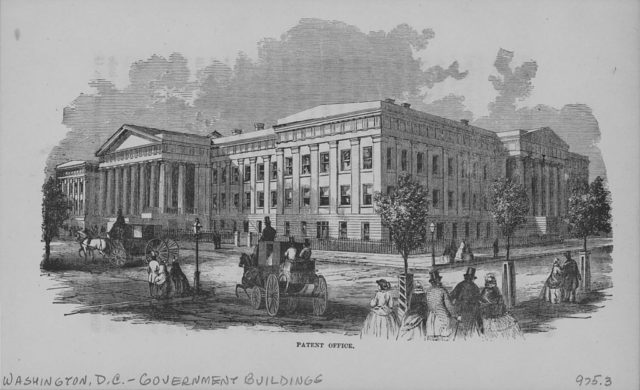 Somewhat disillusioned with teaching, Clara moved to Washington, DC where she became one of the first female patent clerks.

Once again, she demanded the same salary as the men, in consequence of which she was bullied by her co-workers for three years.

Demoted because she was a woman, but not silenced 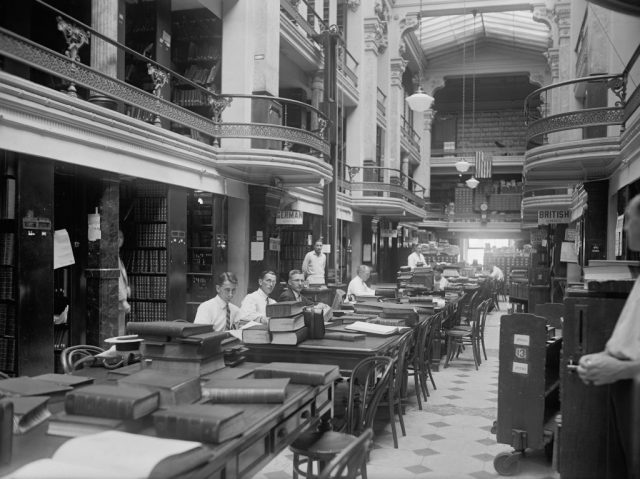 Secretary Robert McClelland worked for the Interior Department which had jurisdiction over the patent office. He objected to women as federal employees, and so demoted Clara to a mere copyist. From a salary of $1,400 a year, she went to earning 10 cents per 100 words copied.

Despite her reduced circumstances, Clara continued to speak her mind openly, and it was her views on abolitionism that eventually lost Clara her job in 1857.

Became a nurse with no formal qualifications 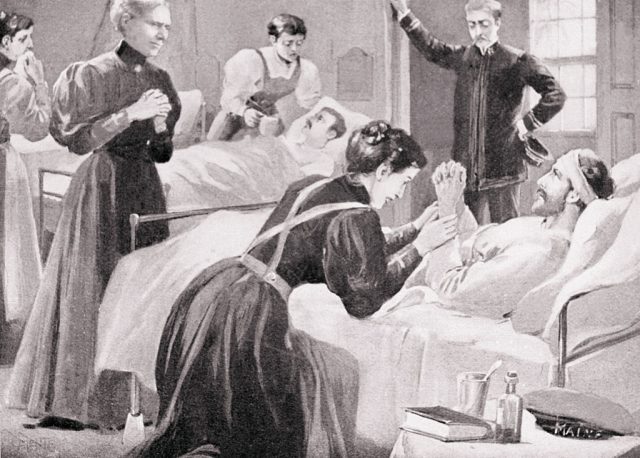 Even though she had little knowledge when she began nursing, she would go on to become a leader in the field. Clara had learned many nursing skills caring for her injured younger brother. When she was 11 years old, he fell from a barn roof and injured his head.

Clara nursed him day and night for two years, even sleeping in his room. She learned how to give him the correct medication and bleed him with leeches. Everyone else gave up on him, but Clara persevered. Under her care, he recovered and served as Assistant Quartermaster in the Union Army.

Used her own money and resources to help others 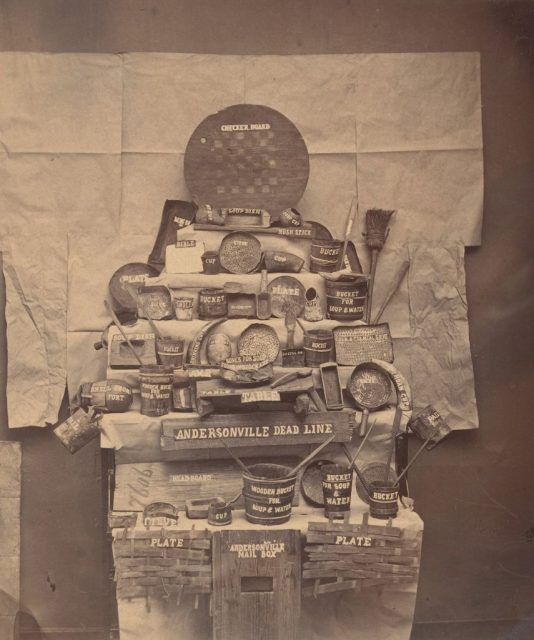 Relics of Andersonville Prison, June 1866. Clara Barton, the first president of the American Red Cross, began her philanthropic career by distributing supplies for the relief of wounded soldiers during the Civil War. At its close, she organized the first bureau of records in Washington, DC. (Photo Credit: Sepia Times/Universal Images Group via Getty Images)

Clara first became involved in helping wounded soldiers when some from the Massachusetts regiment arrived in Washington, DC. Struck by the fact she had grown up with some of these men – and even taught some of them – she and other women provided clothing, food, and supplies.

When her own supplies ran short, Clara placed an ad in a Massachusetts newspaper for donations, and supplies flooded in. 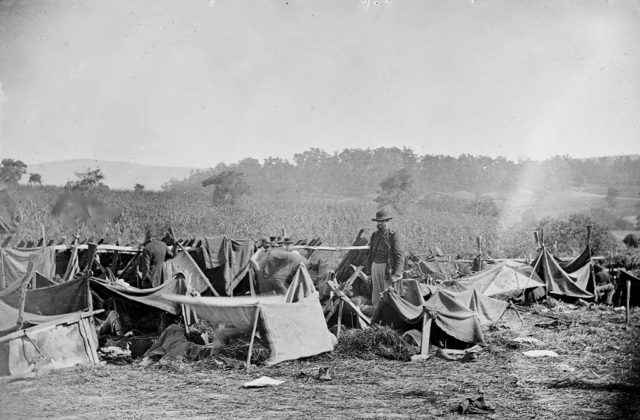 View of the Confederate wounded gathered at Smith’s Barn, with Dr. Anson Hurd, of the 14th Indiana Volunteers, in attendance, Keedysville, MD, 1862. Smith’s barn was turned into a hospital during the battle. (Photo Credit: Buyenlarge / Getty Images)

At the time, many thought that women wouldn’t have the strength or endurance to assist with medical duties. But, as she’d done twice before, Clara showed them that women were just as good as men.

According to the Clara Barton Missing Soldiers Office Museum website: “Working under fire at the Battle of Antietam, her first experience in the heat of battle, she outlasted the assistant surgeons, hospital stewards and many of the surgeons, all the while suffering from symptoms she thought to be typhoid fever. Her work went well beyond feeding, reading and writing for [the soldiers]… Barton performed first aid, triage and sometimes transported patients from the field under fire.”

Her work with soldiers in the Civil War resulted in monikers like “the Florence Nightingale of America” and “the Angel of the Battlefield.”

She had several close calls on the battlefield 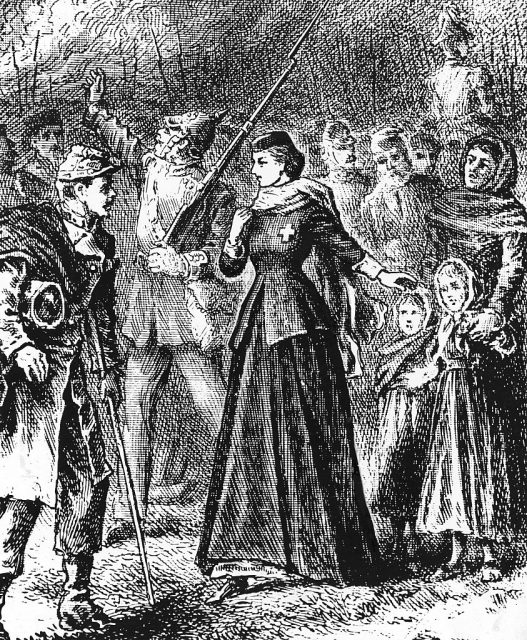 At the Battle of Antietam, Clara was tending to the wounded men on the battlefield. As she held one man’s head, helping him to drink, a bullet tore through her sleeve and killed him. Writing about the incident afterward, Barton stated: “There was no more to be done for him and I left him to his rest. I have never mended that hole in my sleeve.”

Another time, a cannonball tore through her skirt. Despite these frequent brushes with death and injury, Clara was not swayed from her purpose. 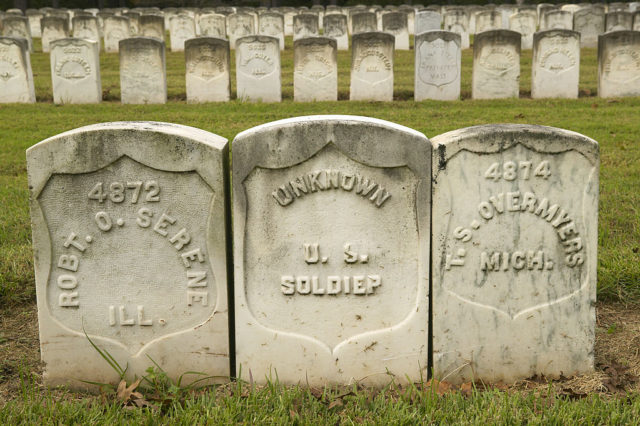 After the war, when Clara found out that distraught relatives were writing to the War Department, begging for news of those classed as missing, she was determined to do something about it. So she set up The Office of Correspondence with Friends of Missing Men of the United States Army in 1865.

Over the next four years, she and her assistants received over 63,000 inquiries and were able to identify around 22,000 soldiers. In the summer of 1865, she and others were able to organize proper burials for 13,000 men who had died in the Andersonville prison camp.

Her office was unexpectedly rediscovered and is now a museum 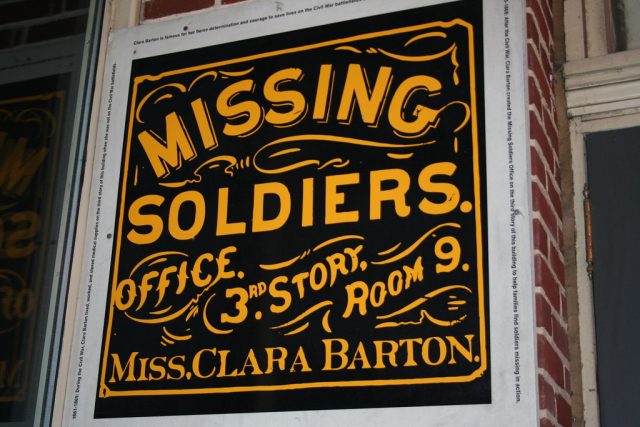 The Missing Soldiers Office was closed in 1869. The building was closed up and forgotten about until 1997, when a General Services Administration carpenter named Richard Lyons was sent to assess the site for demolition.

While inspecting the property, he found a wealth of historical items in the attic, including records and documents, signs, clothing, and newspapers. Lyons informed his superiors and rather than being shut down, the building and its contents were preserved.

In 2015, with the help of the National Museum of Civil War Medicine, the office in downtown Washington, DC was turned into a museum called the Clara Barton Missing Soldiers Office Museum.

While on a health break, she decided to co-found the American Red Cross 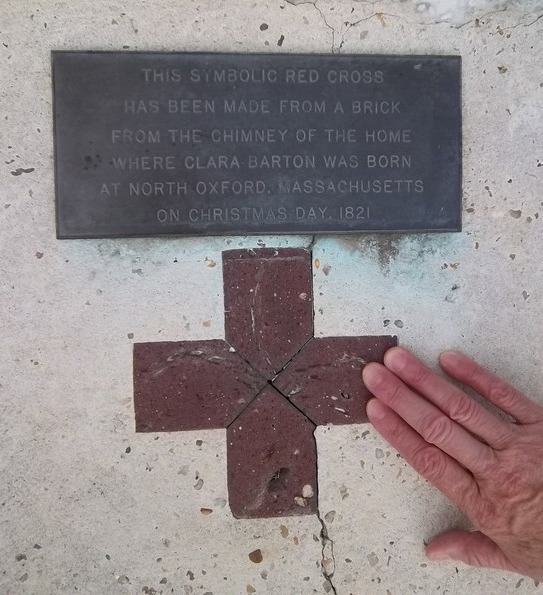 Between 1865 and 1868, Clara toured the country giving lectures on her experiences. However, when her health started to deteriorate, her doctor sent her to Switzerland to recover in 1869.

While she was there, Clara met Dr. Louis Appia and learned about his work forming the Red Cross. Inspired by his efforts, when Clara returned to America she set about creating her own branch of the Red Cross – which was finally established in 1880.

Clara served as president until May 1904, when she was 82 years old.

Heroic efforts to save Texas strawberries 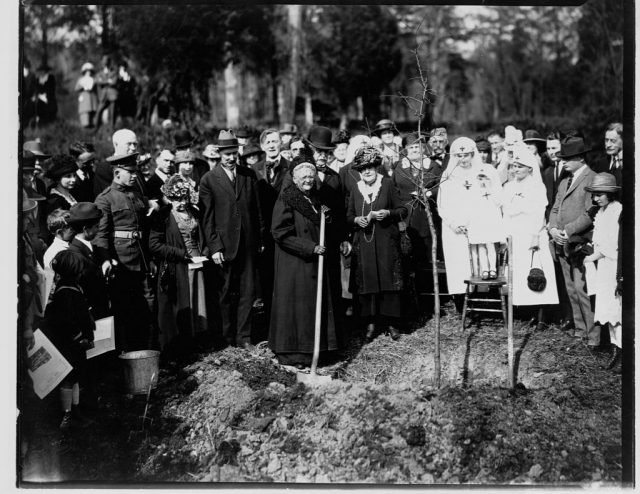 It was a struggle to get the Red Cross up and running in America. Clara was unable to convince President Rutherford B. Hayes of its value because Hayes believed that no calamity like the Civil War would happen in America again.

Luckily, Clara had more luck convincing President Chester Arthur that the Red Cross could help with disasters, not just war – a statement that was proven correct in 1900 after the Galveston Hurricane decimated Texas strawberries.

In A Story of the Red Cross, Clara Barton wrote of visiting Texas in the aftermath: “All was swept away ”“ sometimes as far as forty miles back into the level country… The poor farmers walked their desolated fields and wrung their hands.”

The Red Cross managed to secure donations of 1.5 million strawberry plants, which meant that the strawberry industry was saved within the space of two weeks. Clara noted that: “we left no idle, wringing hands on the mainlands of Texas.” 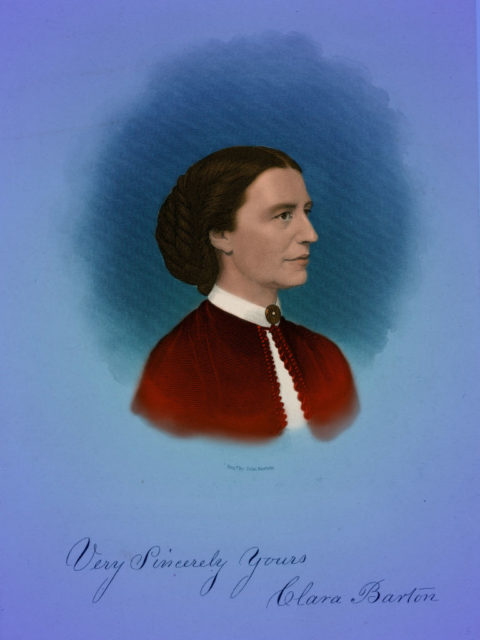 Clara Barton died of pneumonia on April 12, 1912, when she was 90 years old. She had written and published her autobiography, The Story of My Childhood, just four years earlier.

More from us: Mathew Brady’s portraits of notable people from the American Civil War

There are several places named in her honor, from schools to community centers. Perhaps the most unusual thing to be named after her is Barton’s Crater on Venus!