You don’t have to be quirky to work in Hollywood. But it helps! Some classic stars from the Golden Age showed surprising behavior behind the scenes.

From bizarre pets to psychic abilities, let’s check out these qualities. From quirk-some to irksome… 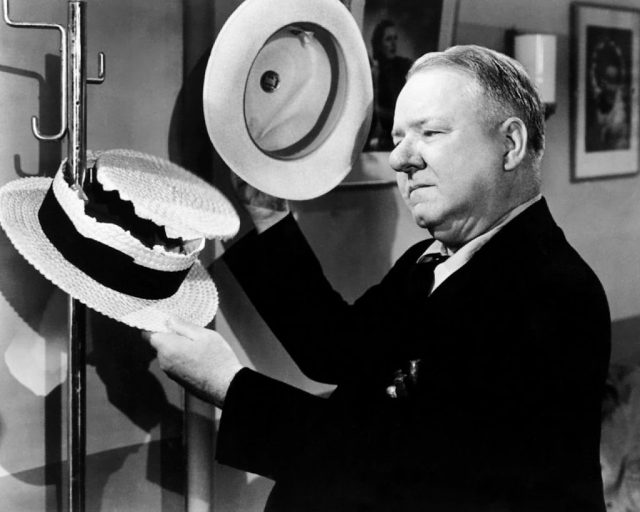 American actor and comedian WC Fields accidentally knocks the crown out of his boater on a hatstand, circa 1935. (Photo Credit: Silver Screen Collection/Getty Images)

The big-screen comedian was more than a little familiar with the inside of a bottle. Reports state that he’d keep himself generally topped up, leading to some hair-raising incidents.

“According to his old friend Groucho Marx, Fields used to hide behind bushes on his front lawn and shoot at passersby with a BB gun,” writes Grunge. Those on the receiving end wouldn’t have dreamed the identity of their potential assassin.

Not so much “My Little Chickadee” as “Duck!” 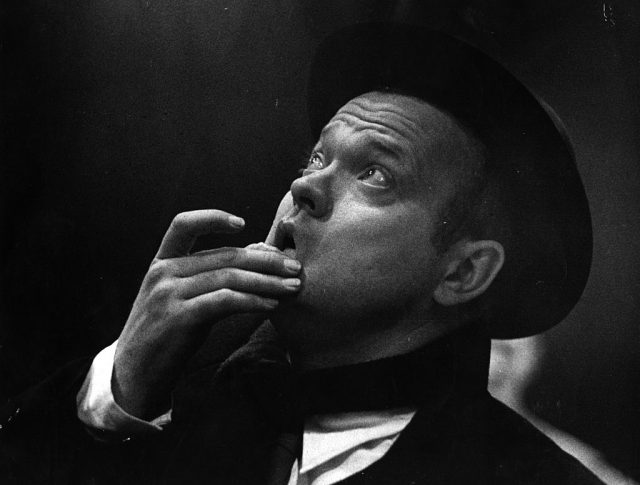 He may have directed Citizen Kane (1941) at the relatively tender age of 25. However, wunderkind Welles had insecurities about himself, like any other star.

Turned out he was a little sniffy… about his nose. He thought it was too small! This led to him using an array of fake noses onscreen. He donned a prosthetic hooter for Kane, not to mention classic film noir A Touch Of Evil (1958).

Director Lewis Gilbert worked with Welles on Ferry To Hong Kong (1959). As recounted in Gilbert’s 2010 autobiography All My Flashbacks, the great man insisted on bringing his own nose, which was specially delivered to the location. That said, the package reportedly took some finding!

Welles insisted on applying the prosthetic himself. The end result saw the nose change angle dramatically between scenes. 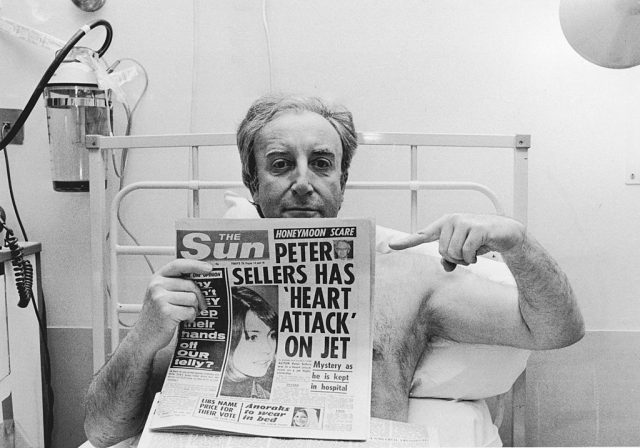 British actor Peter Sellers points to a headline in ‘The Sun’ which speculates about his current period of hospitalization (Photo Credit: Evening Standard/Hulton Archive/Getty Images)

The versatile actor had a major problem when it came to colors. Green and purple were reportedly a total no-no for him. “Notoriously superstitious and neurotic, he banned them from his movie sets after a psychic told him they were unlucky,” writes the New York Times.

And there are other stories. Mental Floss notes an incident from the set of After The Fox (1966), in which Sellers co-starred with Ekland. Director Vittorio De Sica became furious at a woman’s purple outfit, revealing to Sellers that this was the color of death!

However the phobia started, it posed a serious challenge both for Sellers and those who worked with him. 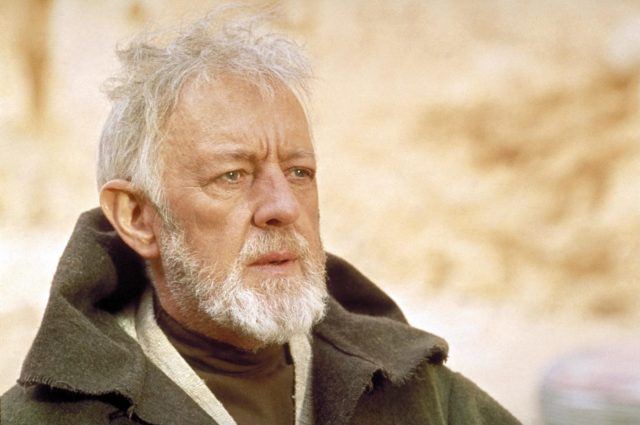 A Jedi master loved by millions, Sir Alec Guinness also had other mystical qualities. He believed himself to be on the psychic side. And he had a point. His supposed talents memorably manifested themselves during an encounter with James Dean.

In 1955, Guinness found himself in the same restaurant as the star of Rebel Without a Cause. Dean wanted to show off his new Porsche 550 Spyder, though the English actor’s reaction wasn’t what he expected.

Guinness took against the vehicle and warned Dean not to drive it, otherwise, he’d wind up dead! A bemused Dean ignored the unearthly advice. He was then killed in a crash just one week later. Eerily, the man who would be Obi Wan told the young star he’d lose his life in seven days’ time. 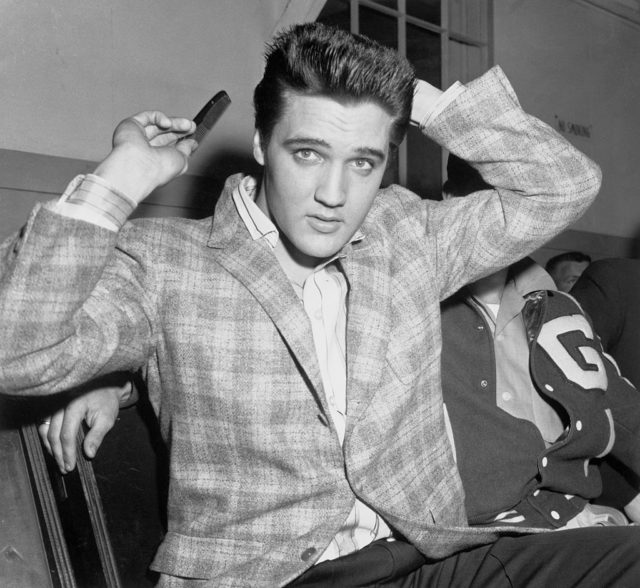 You’d probably expect Elvis to display something in the way of quirkiness. His lifestyle alone is the stuff of showbusiness legend. This included pets – Presley was apparently set on building a zoo, for which he’d need more than just cool cats and hound dogs.

Yet when the King of Rock and Roll adopted a chimp named Scatter, it was a recipe for disaster. Far Out, via actor and comedian Eddie Deezen, writes the pelvis-owned primate would “tear apart dressing rooms and cause mayhem for the production supervisors” on movie sets.

As far as this hairy hellraiser was concerned, the law of the jungle applied. Scatter had “a penchant for alcohol, reportedly swilling whiskey when unattended.”

The chimp went from Graceland to the Pearly Gates after dying in what some think are suspicious circumstances. Did an employee of Mr. Presley poison the poor primate? Like a banana, you have to peel away the layers to get to the good stuff. 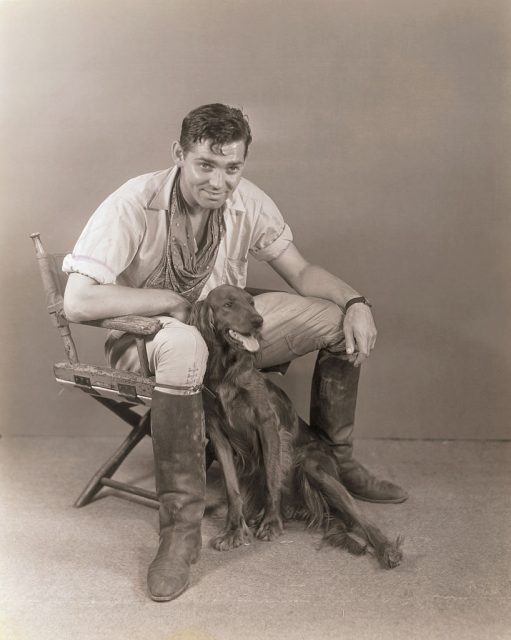 Star and His Best Pal. Clark Gable and his Irish setter hunting dog “Queen” who is his constant companion at the Metro-Goldwyn Mayer studios (Photo Credit: Bettmann / Contributor)

He didn’t give a damn about Scarlett O’Hara. But one thing star Clark Gable did care about was personal hygiene.

His own denture situation notwithstanding, he fixated on keeping squeaky clean at all times. Grunge notes that his cleanliness routine involved a portable shower he took with him so he could hose off the dirt when needed.

Classic Hollywood Central writes that Gable “showered several times a day and he never took a bath because he was disgusted by the thought of sitting in dirty water.” 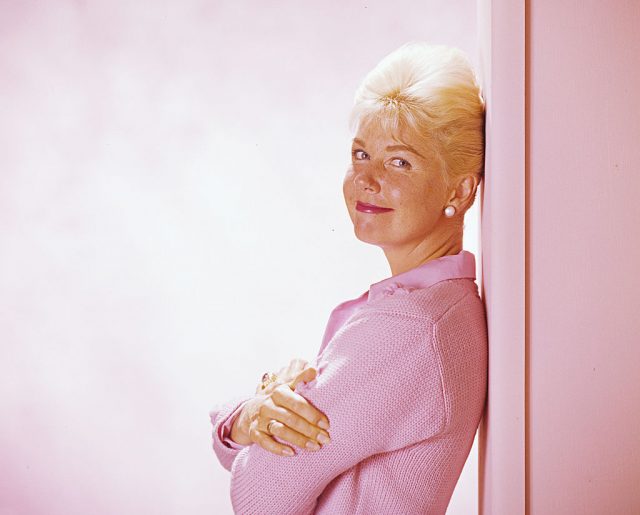 Part of Doris Day’s skincare routine involved a tub of Vaseline. You might view the all-American screen icon differently, after hearing about Doris’s extreme measures over her epidermis.

Day’s 1976 autobiography Her Own Story (co-authored with A.E. Hotchner) revealed she would regularly slather herself in the petroleum jelly before hitting the hay.

What about greasy sheets? No problem! She simply popped on a pair of PJs, not to mention gloves and socks to keep everything nice and… well, icky. Day apparently swore by the night-time procedure for softer skin. 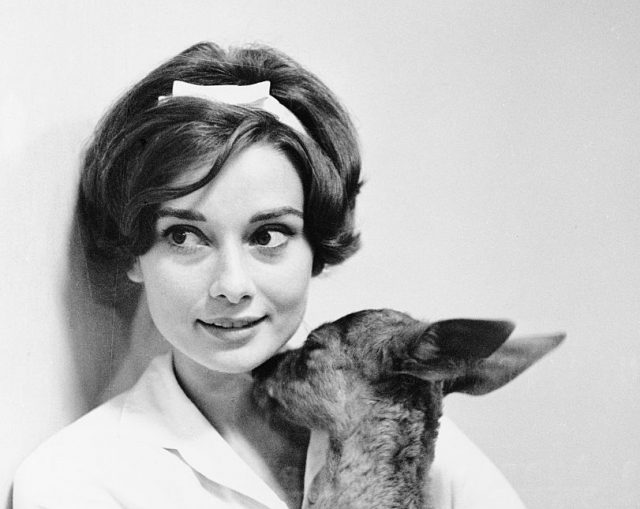 Actress Audrey Hepburn gets a kiss from her pet fawn in her home. (Photo Credit: Bettmann / Contributor)

Just as Elvis acquired an allegedly unruly chimp, so Audrey Hepburn took a shine to Pippin the deer, who she met while filming Green Mansions (1959).

You’ve heard of stars who take designer dogs to the mall? Well, Miss Hepburn didn’t “Golightly” when sharing her life with the furry fawn. Less Breakfast at Tiffany’s and more Break stuff at Tiffany’s, we’re thinking.

More from us: Nicolas Cage Facts That Show Why He Is A True Original

Twenty Daily writes that “even after Pippin was given her own bathtub to sleep in, she still shared Hepburn’s bed from time to time!” A dangerous business perhaps, what with those hooves. Did this adorable Bambi thump her?

« The Queen Cancels Her Christmas Trip to Sandringham, Will Spend the Holiday at Windsor Castle
15+ Heroic Facts About Clara Barton on Her 200th Birthday »